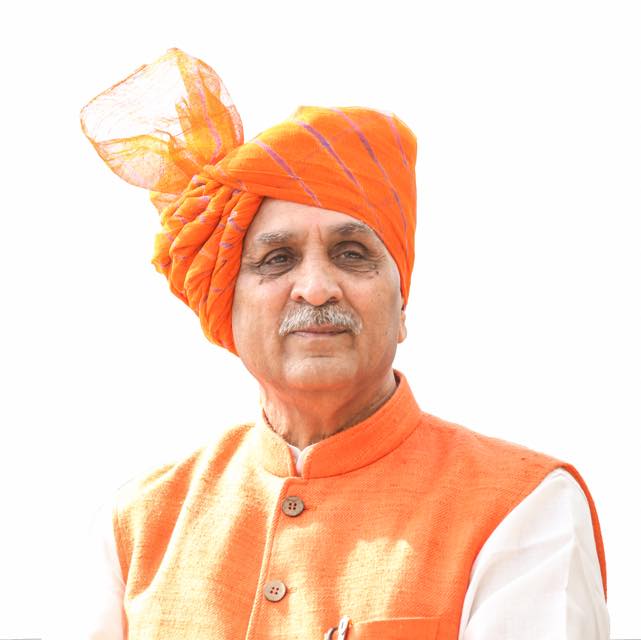 Vijaykumar Ramniklal Rupani is the Chief Minister of Gujarat. He was born on 2-08-1956 to Mayaben and Ramniklal Rupani in Rangoon, Burma. He was the seventh and youngest son of the couple. His family moved to Rajkot in 1960 due to political instability in Burma.

He studied Bachelor of Arts from Dharmendrasinhji Arts College in 1977 and LLB in 1980 from Saurashtra University.

He is a partner in a trading firm Rasiklal & Sons, founded by his father. He had worked as a stockbroker.

He has been associated with Bharatiya Janta Party(BJP) since its establishment. He was a Pracharak of RSS from 1978 to 1981. He was elected as a Corporator of Rajkot Municipal Corporation (RMC) in 1987 and became the Chairman of the Drainage Committee.

He was also the Chairman of the Gujarat Government’s ‘Manifesto Implementation Committee’, from 1998 to 2002. He was appointed as Chairman of Gujarat Tourism Corporation in 2006.

He was a Member of Parliament(MP), Rajya Sabha from 2006 to 2012, Gujarat. He served as BJP’s Gujarat Unit General Secretary four times and Chairman of the Gujarat Municipal Finance Board in 2013 during the chief ministership of Narendra Modi.

In the 2014 Bypoll, he was elected as Member of the Legislative Assembly(MLA) from Rajkot West, Gujarat. In 2015, He was inducted into the Cabinet of former CM Anandiben Patel and became Minister of Transport, Water Supply, Labour and Employment. He was the BJP State President, Gujarat from February 2016 to August 2016.

He is serving as Chief Minister of Gujarat since 2016. Again he won the Member of Legislative Assembly(MLA) in 2017 from the Rajkot West constituency of BJP.

Joined in the Jan Sangh

of Standing Committee of RMC

of Rajya Sabha from Gujarat

of the Gujarat Municipal Finance Board

of from Rajkot West, Gujarat