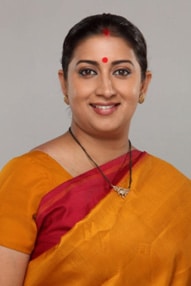 Smriti Irani is a Minister in the Union Cabinet of India. She is serving in the cabinet of Narendra Modi as Minister of Textiles and was given additional charge as Minister of Women and Child Development in the 2nd cabinet of Modi since May 2019. She is an Indian politician, former model, television actress, and producer.

Smriti Malhotra was born on 23-03-1976 to a Bengali mother, Shibani Bagchi, and a Punjabi-Maharashtrian father, Ajay Kumar Malhotra in New Delhi. She is the eldest of 3 sisters. She has been a part of the Rashtriya Swayamsevak Sangh (RSS) from childhood as her grandfather was an RSS Swayamsevak and her mother was a member of Jana Sangh. She was educated at the Holy Child Auxilium School, New Delhi. Later, she enrolled in the School of Open Learning at the University of Delhi in 1994.

In 2001, Smriti married a Parsi businessman – Zubin Irani. In October the same year, the couple had their first child, a son named Zohr. In September 2003, the couple had their second child, a daughter named Zoe. Both her children are also practicing Parsis by religion. Smriti is also a stepmother to Shanelle who is Zubin Irani’s daughter from his previous marriage with a coordinator and former beauty contestant Mona Irani and now is a law student at Georgetown University in the United States.

Smriti reached the final round of the beauty pageant Miss India 1998. Later she appeared in one of the songs of the album “Saawan Mein Lag Gayi Aag” with Mika Singh. In 2001, She played the epic character, Sita, in Zee TV’s Ramayan. Also, she co-produced the show Thodi Si Zameen Thoda Sa Aasmaan.

In 2007, Smriti produced the TV serial ‘Virrudh’. Also, she portrayed the lead character of Vasudha in it. Later she produced Mere Apne. Vinod Khanna played important role in it. She also acted in ‘Teen Bahuraaniyaan.

In 2008, Irani along with Sakshi Tanwar hosted the dance-based reality show Yeh Hai Jalwa. In the same year, she also produced ‘Waaris’. After this, in 2009 she appeared in a comedy show Maniben.com. She also co-produced the show in collaboration with Contiloe Entertainment

Smriti worked in the Bengali movie Amrita in 2012. Before that, she played the Personification of Dwarkamai in the Hindi movie ‘Malik Ek’ in 2010. In 2011 she played the role of an activist in the Telugu movie ‘Jai Bolo Telangana.

Irani joined the Bharatiya Janata Party in 2003. She became the Vice-president of the Maharashtra Youth Wing in 2004. In the 2004 general elections for the 14th Lok Sabha, she contested unsuccessfully against Kapil Sibal from the Chandni Chowk constituency in Delhi. She was nominated as Executive Member of the central committee of the BJP.

In May 2009, Irani while campaigning for Vijay Goel’s candidature in New Delhi, voiced her concerns about the safety of women in the capital. She advocated capital punishment for rapists as a deterrent.

In early 2010, Irani was appointed National Secretary of BJP and on 24 June, she was appointed All India President of the BJP’s women’s wing, BJP Mahila Morcha. As National President of BJP Women’s Wing, she has significantly and successfully pursued Permanent Commission for Women in the Indian Army by facilitating legal aid to women officers. From 2011-2019, She was sworn in as a member of parliament from Gujarat to the Rajya Sabha.

Irani contested the 2014 general elections against Rahul Gandhi in the Amethi constituency of Uttar Pradesh. Irani lost to Gandhi by 1,07,923 votes, a 12.32% margin. In 2014, Prime Minister Narendra Modi appointed her as the Minister of Human Resource Development in his cabinet.

Minister of Human Resource Development. During this tenure, she announced to start new yoga departments in six new universities in 2016 and She became Minister of Textiles in Government of India after the seat was vacant by M.Venkaiah Naidu. He resigned from the Ministry to take part in Vice Presidential Elections. From 2017-2018, She was served as Ministry of Information and Broadcasting

In 2019, She succeeded in doing what she failed to do in 2014 and won the Member of Parliament, Lok Sabha of Amethi seat by beating Rahul Gandhi on his home turf. Consequently, she has conferred the portfolio of Minister of women and child development; and Minister of textiles.

Smriti Irani did her schooling in Holy Child Auxilium, Delhi, and School of Correspondence and currently, she is enrolled at the University of Delhi. She is associated with various NGOs such as the Cancer Patients Aid Association and Vatsalya Street Kids Foundation. Smriti was the first Indian to represent the nation at the Monte Carlo Television Festival. She was appointed, Goodwill Ambassador to India by USAID for the WHO-ORS program for 3 years.

Smriti established her own NGO called ‘People for Change’ in 2007. ‘People for Change’ has provided sports scholarships in Nasik, undertaken drinking water projects in rural India providing borewell facilities to over 35 villages in Maharashtra, collected and distributed over 10 tons of relief material in association with 92.5 FM radio station, during the Mumbai floods in 2007. The organization also provides scholarships for higher education to children from the economically weaker background and holds financial literacy programs for women called ‘Women & Wealth’. 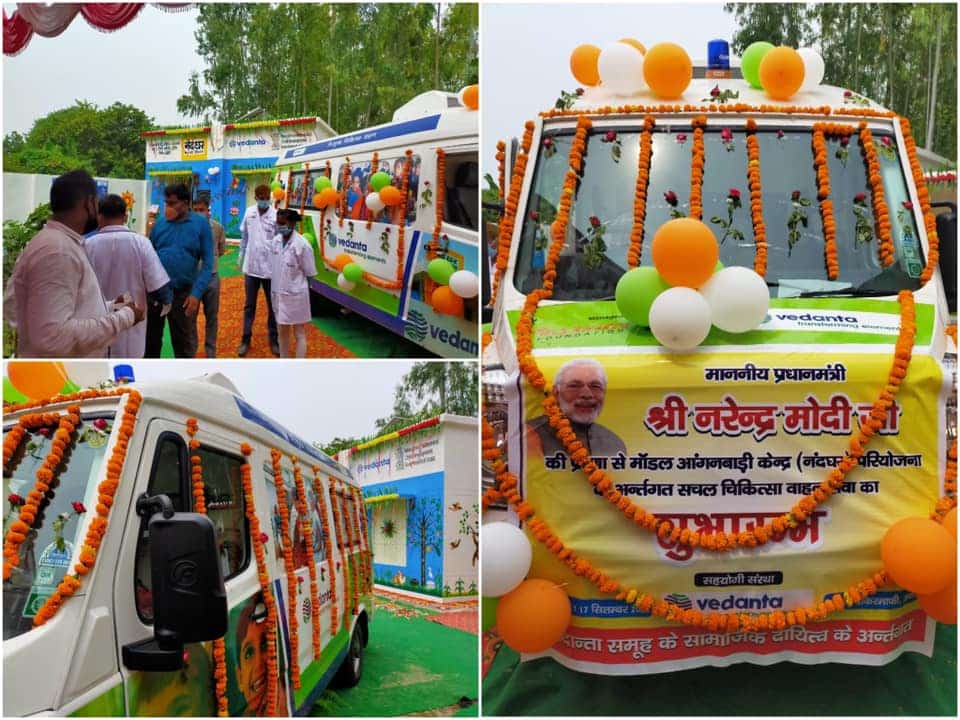 On the occasion of the birthday of PM the first mobile health van facility was launched in Amethi to upgrade and technically improve health facilities, this van with primary facilities. Will provide counseling in homes. HappyBdayNaMo 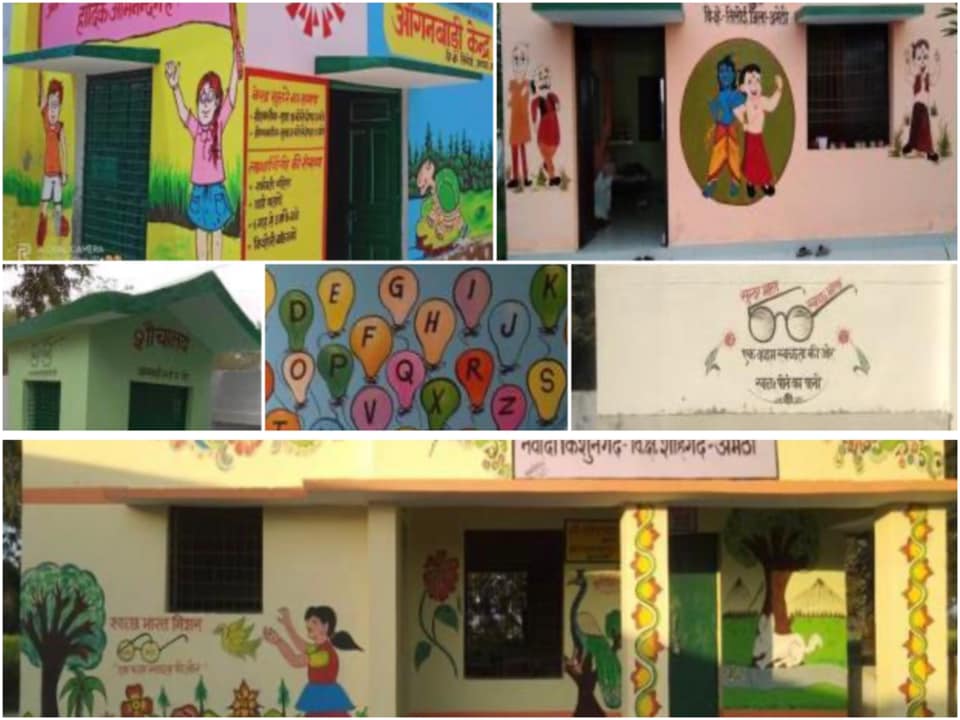 of Open Learning at the University of Delhi.

She has been a part of the Rashtriya Swayamsevak Sangh (RSS) from childhood as her grandfather was an RSS swayamsevak and her mother was a member of Jana Sangh.

of the Maharashtra Youth Wing.

of the central committee of the BJP

from Gujarat to the Rajya Sabha.

of Committee on Coal and Steel.

of Textiles in Government of India

of Information and Broadcasting

from Amethi Constituency to the Lok Sabha.

of women and child development