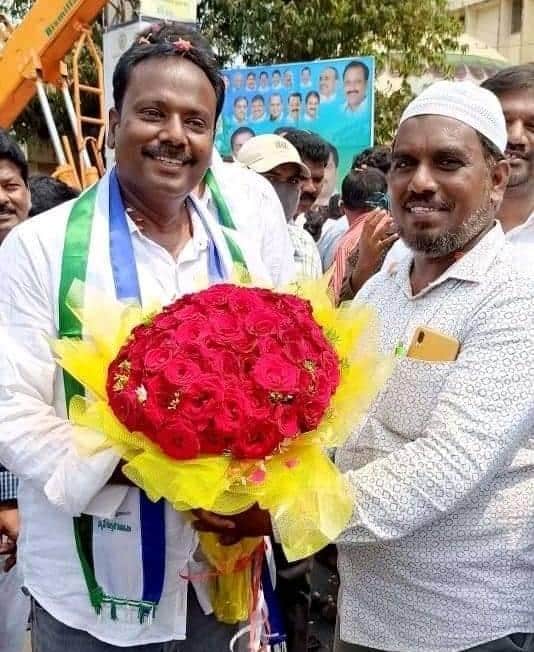 SK Safi is an Indian Politician and current Anakapalle Parliament Incharge, from Visakhapatnam district, the state of Andhra Pradesh. He was born on 12th August 1989 in Pendurthi. His parents were Khadar Vali and Fathima Bibi.

In 2005, Safi obtained his Board of Secondary Education at ZP high school, located at Pendurthi. From 2007-to 2009, he completed his Intermediate from Govt Junior College, which resided at Pendurthi. In 2019, Sati acquired his Graduation(Degree) at Gitam University, Vizag. He gets into his higher education with his LLB. He is pursuing his LLB from All Scenics college.

Safi was always plenty of zeal and enthusiasm for serving and assisting those in need. He volunteered his services to the public as a youngster. His desire for social service inspired him to pursue a career in politics.

He officially entered into Politics through the Indian National Congress(INC) party in 2017 which is ruling under the leadership of Sonia Gandhi.

He was chosen as the Youth Leader by the villagers who recognized Safi’s ability to support the people in all possible ways at any given time as a social worker and party worker.

Safi is an active leader who constantly brings public issues to the attention of authorities and makes them solved. He has strengthened the Party at the field level.

His contribution to the Anti-emergency movement impressed senior political leaders. As a result of this, he was eventually appointed Anakapalle Parliament Incharge, from Visakhapatnam district, the state of Andhra Pradesh in 2017.

In the same year, Safi contested for the MLA post from the Anakapalle constituency with the intention of being elected as an MLA and providing more service to the people but unfortunately, he lost the position with a slight difference majority.

from Govt Junior College, which resided at Pendurthi

of the Congress Party

from the Anakapalle constituency