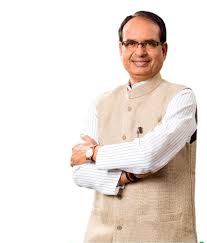 Shivraj Singh Chouhan is the Chief Minister of Madhya Pradesh and a Member of the Bharatiya Janata Party. He was born on 05-03-1959 to Prem Singh Chouhan & Sundar Bai Chouhan in Jait village of Sehore, Madhya Pradesh. From 1981-1983, he is a gold medalist in Post Graduation M. A. (Philosophy) from Barkatullah University. He is an agriculturist by profession.

Chouhan started early political career can be defined as up to the point of his first election to the Lok Sabha. In 1975, At the age of 16, he was elected as the President of the Model Higher Secondary School Students Union. From 1976-1977, he participated in the underground movement against the Emergency and was imprisoned in Bhopal Jail for some time.

In 1977, Shivraj joined Swayamsewak, Rashtriya Swayamsewak Sangh (R.S.S.). He was the youngest volunteer then. After that, he became Organising-Secretary of Akhil Bharatiya Vidyarthi Parishad (A.B.V.P.) in Bhopal. In 1978, He became Joint-Secretary of A.B.V.P., Madhya Pradesh. In 1980, he promoted as General-Secretary and then became National Executive Member in 1982.

In 1984, Shivraj Singh joined Bharatiya Janata Yuva Morcha(BJYM). He was the Madhya Pradesh as Joint-Secretary. Within a year he became Joint Secretary. In 1988, He was elected as President of Yuva Morcha from B.J.P. in Madhya Pradesh.

In 1990, Chouhan was first elected to the State Assembly from Budhni Constituency as an MLA of BJP, He defeated Congress rival by over 22,000 votes. In 1991, He was elected a Member of Parliament for the first time in his career in the 10th Lok Sabha from Vidisha Constituency by Poll elections. From 1991-1992, Chouhan was Convenor of Akhil Bhartiya Keshariya Vahini.

Again in 1998, He was re-elected to 12th Lok Sabha (third term). He was a Member of the Committee on Urban and Rural Development and its Sub-Committee on Ministry of Rural Areas and Employment from 1998-1999.

He was appointed President of BJP, Madhya Pradesh in 2005. Chouhan was chosen to become the Chief Minister of Madhya Pradesh on 30 November 2005. in 2006, He contested a by-election from the Budhni assembly constituency as an MLA, winning his old seat by a margin of over 36,000 votes.

In 2008, Chouhan retained his Budhni seat by over 41,000 votes, and with it, led the BJP to a second consecutive victory in the state as an MLA. On 12 December 2008, he was sworn in for his second term as a Chief Minister of Madhya Pradesh.

In 2013, Chouhan won Legislative Assembly elections as an MLA from Budhni Constituency and holds the record as the state’s longest-serving Chief Minister. In 2011, He was serving as a National Vice-President and a member of the Parliamentary Board and Central Election Committee of the Bharatiya Janata Party.

Chouhan was conferred with Suryoday Manavta Seva Sanman on 13 December 2016. He is the seventh recipient of the award, which carries ₹ 1.11 lakh and is given by spiritual leader Bhaiyyuji Maharaj’s Shree Sadguru Datta Dharmik Evam Parmarthik Trust for bringing qualitative changes in the lives of common people, poor and downtrodden.

Today, in the cabinet meeting, many decisions were taken in the interest of the poor. M. Ay. Sāhūkārī Amendment Bill and scheduled tribe loan Mukti Bill 2020 approved the cabinet. We are bringing Madhya Pradesh scheduled tribe loan mukti bill to free the tribals from the clutches of bankers. This will forgive all the persons of scheduled tribes class in scheduled areas including all loan interest from 15 August 2020 We are bringing the Madhya Pradesh Moneylender (Amendment Bill 2020) to save other sections from the clutches of the bankers as well. The State government is dedicated to everyone’s welfare. 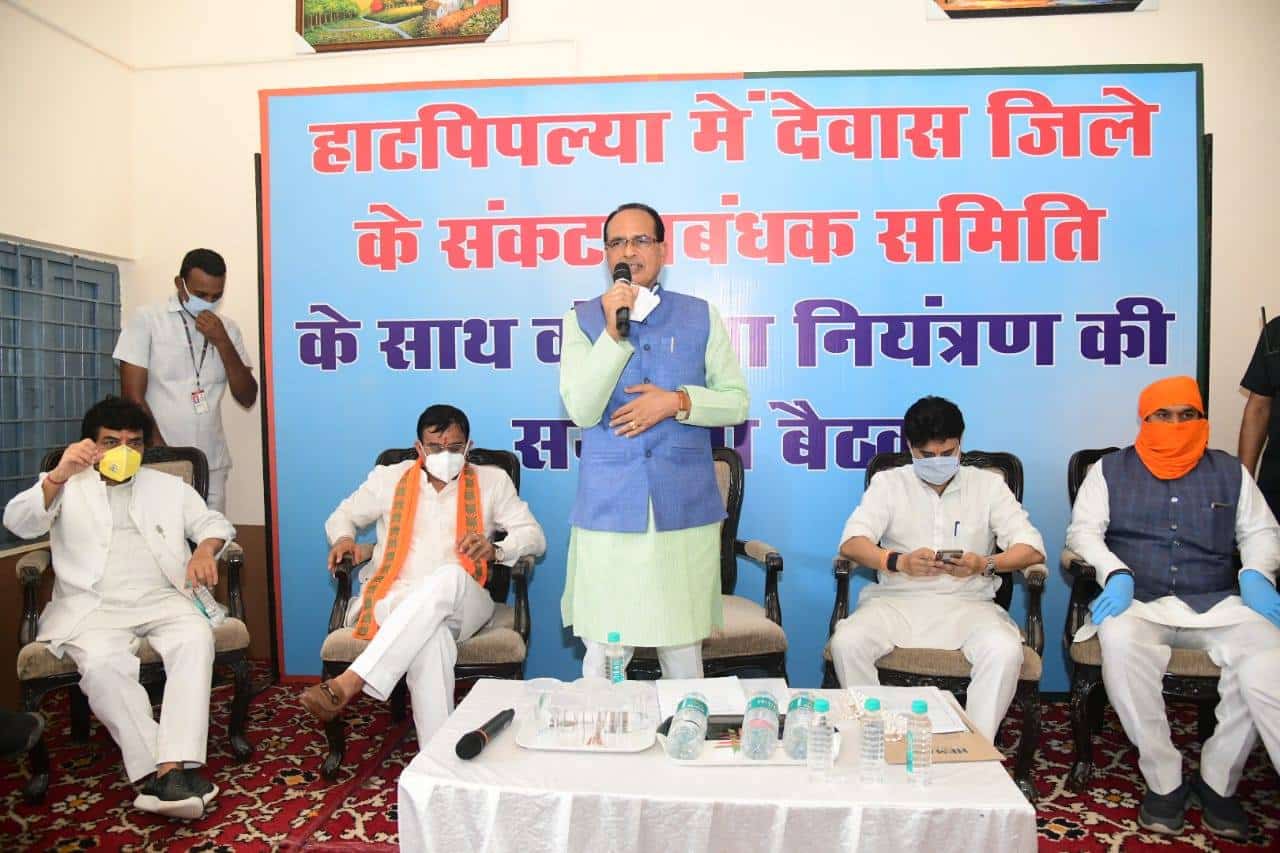 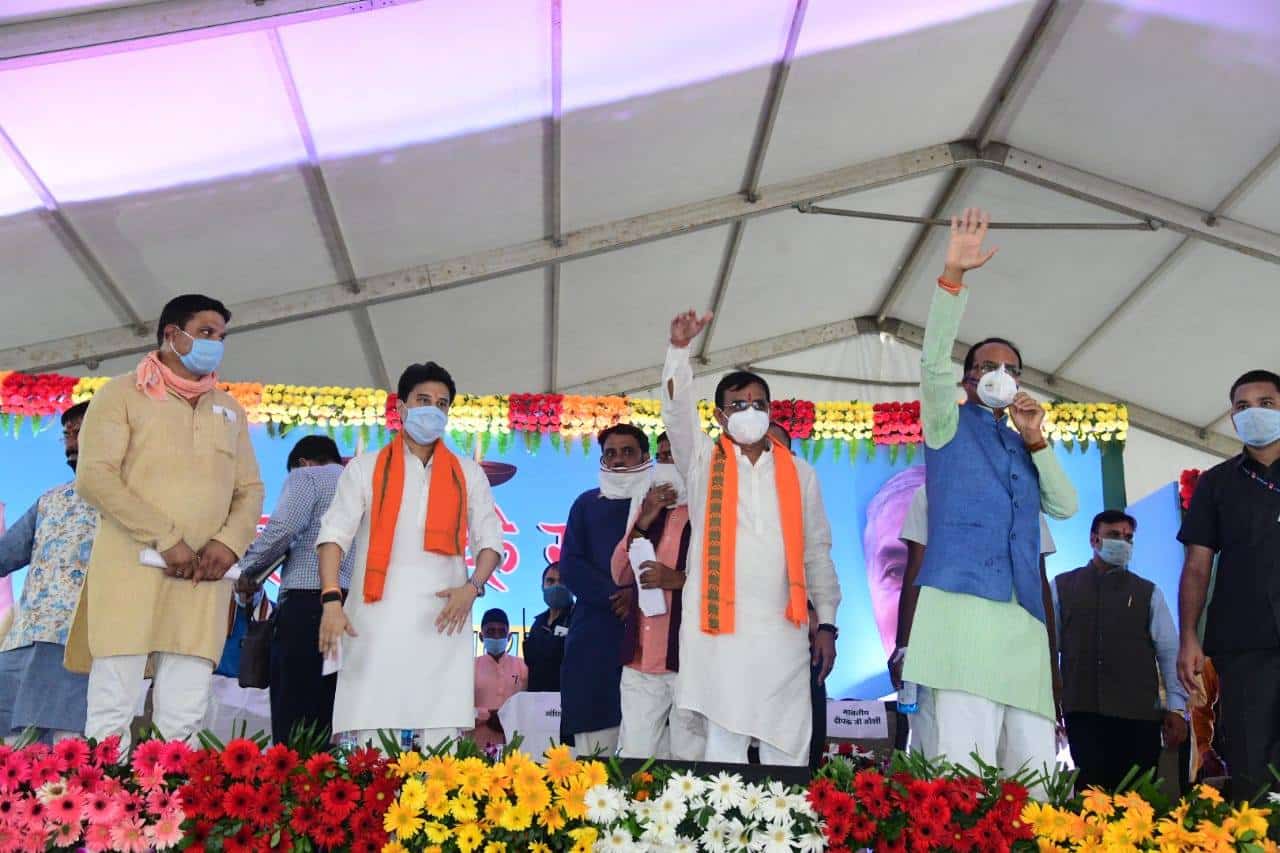 ormer Chief Minister of Madhya Pradesh in hatapipalya of dewas, Saint of politics. The Mother of the statue of kailash joshi ji. Mr. Jyotiraditya Scindia ji and ma. Mr. V. D. Unveiled with sharma ji and other dignitaries. This opportunity shared the foundation stone of various developmental works and shared the thoughts. The soul never dies. Revered Kailash Joshi ji is not a part of us today but he will always be among us through our thoughts. Self with hard work and hard work. Kailash Joshi ji worked for the development of Madhya Pradesh. I pray to God that they bless us to walk on the path of righteousness. Kamal Nath ji made many false promises from the people of Madhya Pradesh at the time of election. Told the farmers that they will forgive all the debt of RS 2 Lakh, will give unemployment allowance to the youth but did not implement a single promise. There was no arrangement of fighting the corona and the wheat. We made a detailed plan to deal with the corona as soon as we came and set a new record of wheat earn in front of the country Kamalnath ji stopped all the schemes of development and the welfare of the public. We started the assembly plan, created employment Setu Portal in the interest of migrant workers and started many developmental worka 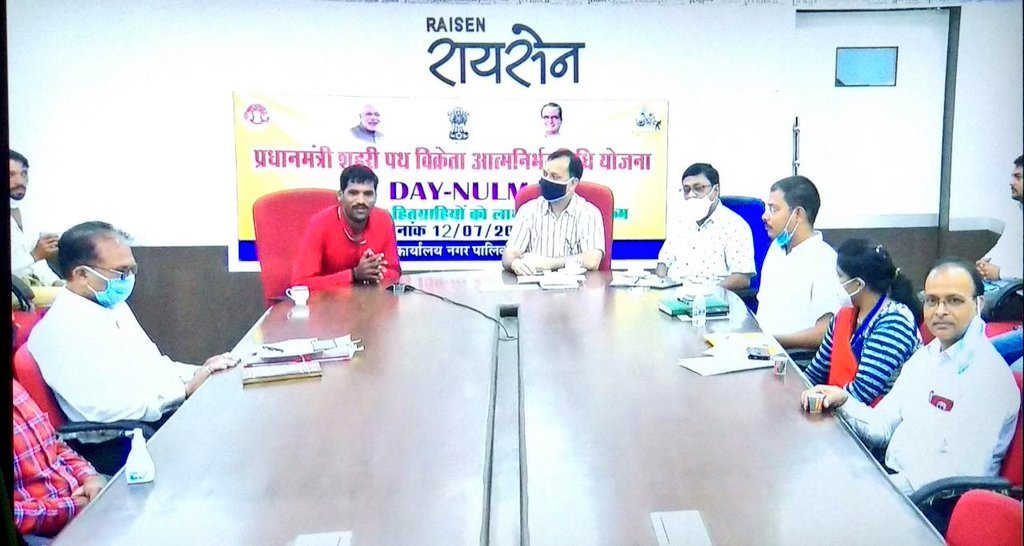 Interacted with the urban path vendor brothers of the state through VC. My way vendor brothers, who earn hard work and fill their family’s stomach, their work was stopped due to the current crisis. Under the prime minister self-fund scheme for the help of such citizens, the loan of Rs. 10,000 will be given without interest. Beneficial doesn’t need to go anywhere. Online approval arranged in pm svanidhi scheme. The State has been registered by 8,70,303 path vendors. OUT OF THIS 1 Lakh 76 thousand brothers and sisters have been given the certificate of introduction and vendor. Our government has made a different plan for rural street vendors. Even in that we will give ten thousand rupees. Guarantee and interest government will give. So that you stand on your feet. I am for you, this government is for you. May your work be successful and the day will increase double night, for that you also work hard and I will also try the best. 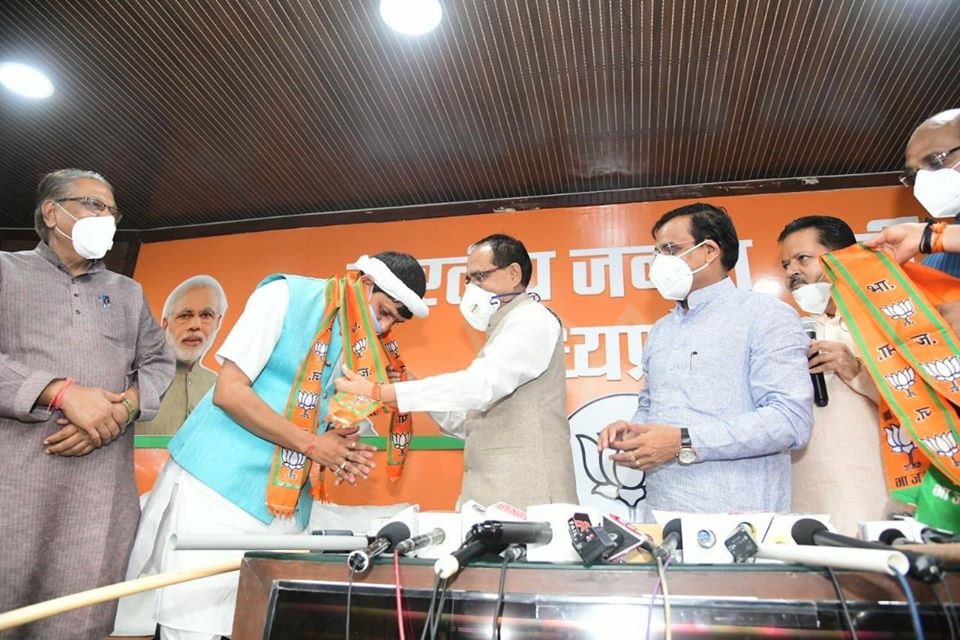 Today, MLA Shri Pradyumna Singh Lodhi has joined our Bharatiya Janata Party family. He has taken this decision in the interest of the people of his area by being fed up of the anti-Congress policies. I welcome her to my huge family. 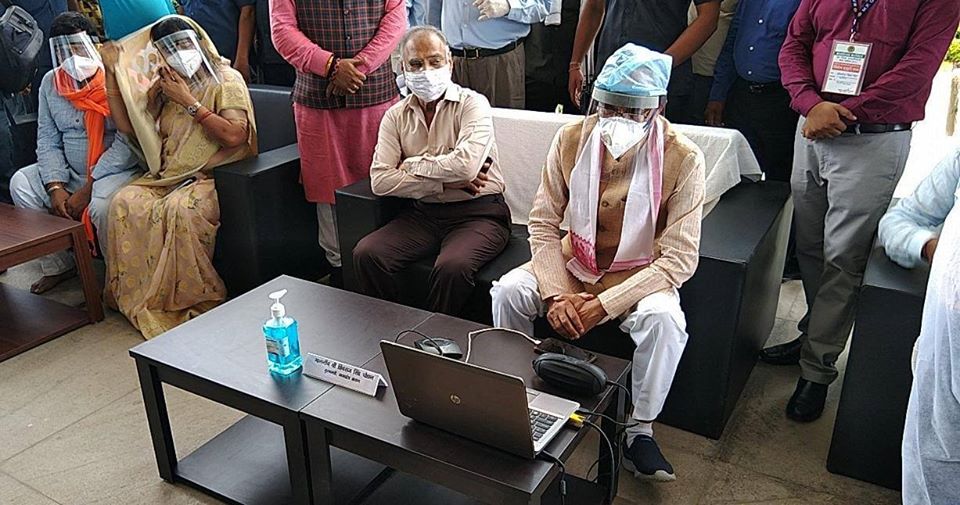 After reaching the dedicated ‘super medical medical college’ for COVID-19 in gwalior, the doctors have taken detailed information of the health facilities, arrangements and the necessary instructions for the doctors and spoke to the patients taking the health.

Inspecting the integrated control and command center on the gwalior migration today and information about the efforts to prevent COVID-19 infection. All the people associated with the rāhatakārya are efficiently working. I believe that soon the public cooperation will be free from the gwalior corona infection 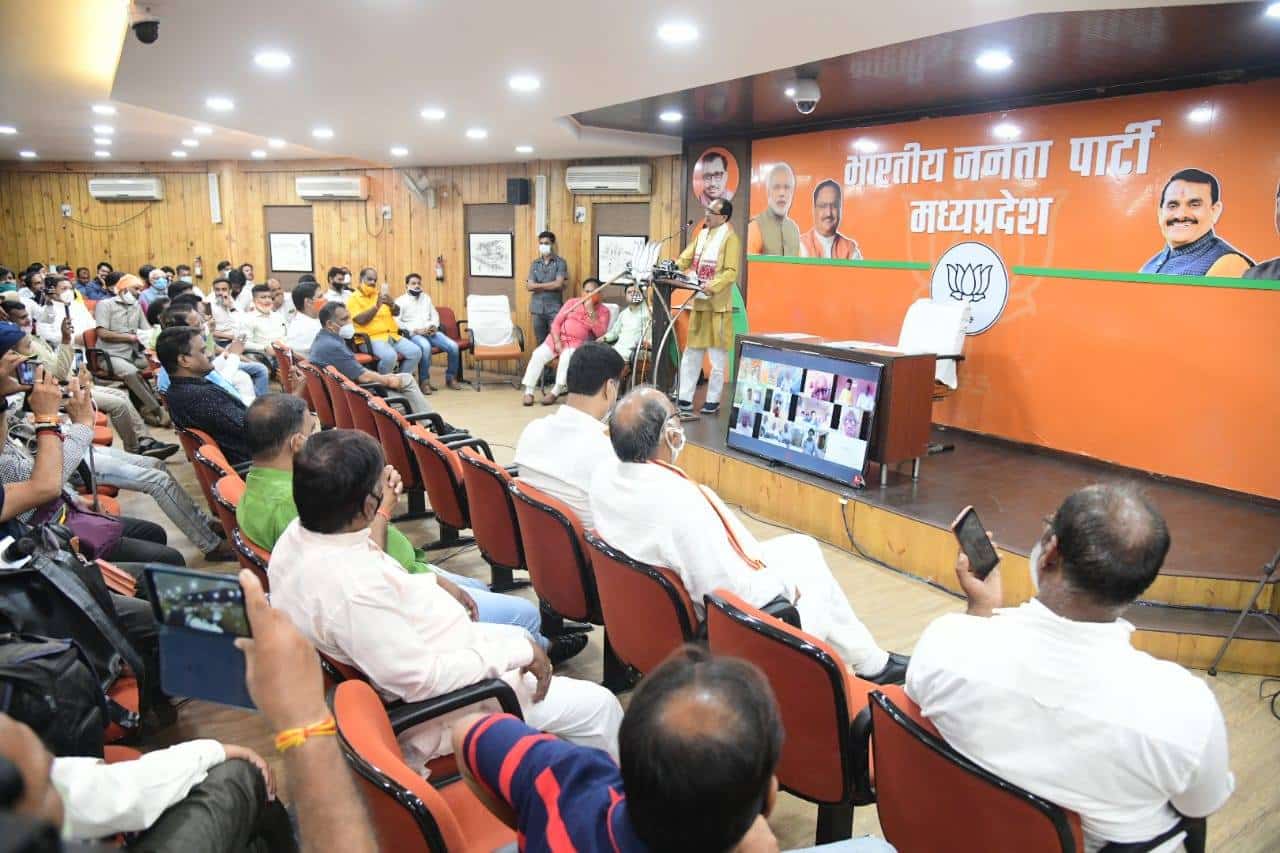 Shared ideas through the virtual rally

Shared ideas through virtual rally with the people of assembly constituency. Chambal Expressway will be built by the government of India and the Madhya Pradesh government. It will not only be road, but it will also develop the land of both sides and we invite industrialists so that the youth of morena can get employment. When the government was in the last year of Congress, it did not buy a grain of millet. I also arranged to buy wheat in the corona period. BROKE ALL RECORDS BY BUYING 1 crore 29 million metric tons of wheat. Madhya Pradesh also gave back Punjab in the wheat purchase. We have arranged to give 10,000 rupees a loan to the street vendor in employment. Loan Guarantee and interest will also give the government. Our government is available to arrange the bread-bread of the poor. My brother’s and sisters, take a resolution with me that the seat of the assembly will be paved by the most votes of the Bharatiya Janata Party and pave the path of development of Madhya Pradesh 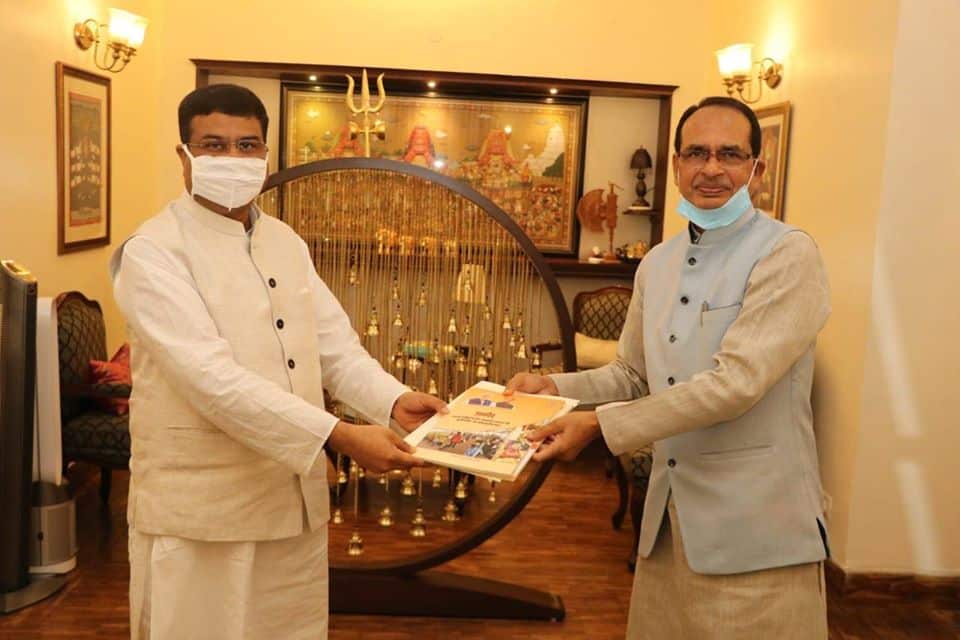 Today Met Union Minister Shri Dharmendra Pradhan Ji in new Delhi and discussed the role of the petroleum and steel sector in promoting the development of Madhya Pradesh, employment creation, svarōzagāra and promoting industries in the state.

M. A. (Philosophy) from Barkatullah University.

from B.J.P. in Madhya Pradesh.

to the State Assembly from Budhni Constituency of BJP

for the first time in his career in 10th Lok Sabha from Vidisha Constituency by Poll elections.

from Vidisha Constituency of BJP

retained his Budhni seat by over 41,000 votes  & led the BJP to a second consecutive victory in the state

of the Bharatiya Janata Party.