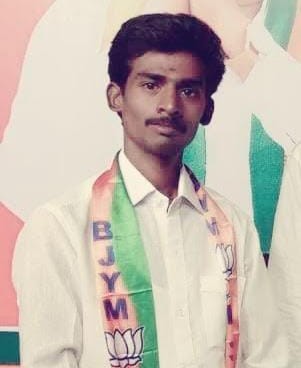 Sangu Swamy BJP is an Indian Politician and current BJYM Youth Mandal President from Machareddy Mandal in the respective state of Telangana.

On the 06th of March 1995, Swamy was born in Chukkapur village of Kamareddy District to the couple Mr.Balaiah & Mrs. Mangamma.

In the year 2011, he received his secondary board of education from ZP High School, resided at Chukkapur. Later, he earned an undergraduate from Government junior college situated at Machareddy and completed it in 2012.

Further, he acquired a bachelor’s degree from Manjeera Degree College located at Kamareddy and finished in 2016.

In the year 2010, he joined the Akhil Bharatiya Vidyarthi Parishad (ABVP) which is registered in the form of a student organization and worked constantly as an ABVP Member by solving the issues of Students.

He garnered the people’s affection and in 2011 he extended services by expanding his responsibilities as the College President for Government Junior College to care about the difficulties that arose in the students till 2012.

Recognizing the work that Swamy was doing for the students, in 2018 he was elected as the College President from Manjeera Degree College to provide more services by continuing his duties and serve students between the years 2014-15.

He stepped in Rashtriya Swayamsevak Sangh (RSS) which is a member of 5-6 million and attained in the meetings organized by RSS Members and in the year 2015 he has been elected as Campaign Committee Member and served all the way till 2017.

His pure determination and sincerity towards the work, in the year 2017 he has been appointed in the admirable designation as Village Youth President and working comprehensively all the time for the welfare of humankind.

Since the day he stepped into it, Swamy has worked above and beyond his means as an Active Member of BJP for the development of the party and the betterment of society by carrying out his duties properly and adhering to the party’s rules and regulations.

Later on, For his constant dedication and efforts for the welfare of the people Swamy was designated with the Position of BJYM Mandal Youth President and working hard to put an end to the problems and inconvenience of humankind.

Swamy actively participated in the Telangana movement for the separation of Telangana from Andhra Pradesh and to form the Telangana as a separate State and He lent great support to the Telangana Statehood Movement by providing intellectual support.
During Telangana Movement, Swamy played an active role and fought for the creation of a new state, Telangana, from the pre-existing state of Andhra Pradesh in India.
Maha Dharna was held at the Clock Tower Center for the separate state of Telangana.
As being a part of the fight for the state of Telangana, Swamy has been organized Padayatra and fought for Telangana State along with party members.
Under the auspices of the Telangana movement, non-stop protests were held for 25 days.
In the periods between 2011-14, he engaged in movement which was held at Osmania University.