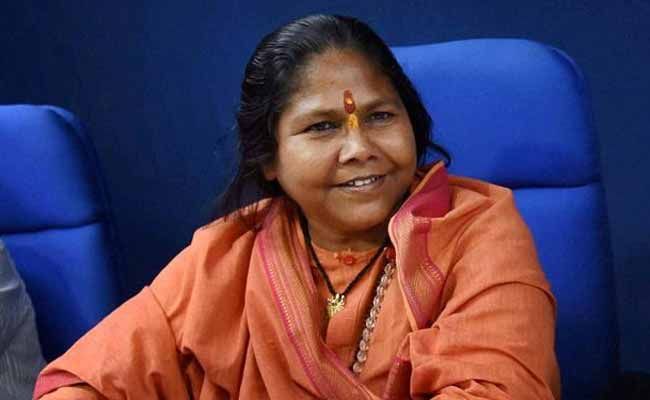 Niranjan Jyoti is more commonly known as Sadhvi Niranjan Jyoti. Jyoti is the Union Minister of State for Rural Development. She was born on 1st March 1967 to Achyutanand & Shiv Kali Devi in the village of Patewra, in Hamirpur district, Uttar Pradesh. She belongs to the Nishad-caste family.

Niranjan Jyoti served as Minister of State for Food Processing Industries in 2014. She was elected Member of Parliament from Fatehpur in 2014 and then again in 2019. Subsequently, she was elected MoS Ministry of Rural Development. She belongs to Patewra village of Hamirpur district, Uttar Pradesh. She was born in a Nishad-caste family which is under another backward community. 18.2 lakh voters in the Fatehpur of whom more than 50% belong to backward castes. That’s the reason Sadhvi always plays a vital role in attracting OBC and SC voters.

Sadhvi Niranjan Jyoti started her political career with the Bharatiya Janata Party(BJP). From 1988-1993, She was a  Member of Kendriya Margdarshan Mandal, Ram Janmabhoomi Movement. From 2003-2007, She was a Member of the Union Executive of BJP. In 2012, She was the Vice-President of BJP, U.P. In 2012, She contested as MLA and won the Harimpur assembly seat, and defeated BSP candidate Fateh Muhammad Khan by a margin of 7824 votes.

In 2019, She was elected as an MP, 17th Lok Sabha from Fatehpur where she defeated Rakesh Sachan of INC by a margin of over one lakh votes. 30 May 2019 onwards Sadhvi Niranjan Jyoti was appointed as a Union Minister of State, Ministry of Rural Development.

On 14 June 2014, one man called Bhanu Patel and his three accomplishes fired at Jyoti as she was returning from a function in Avas Vikas Colony, Lucknow. She escaped unhurt but her bodyguard was injured.

On 1 December 2014, she stated at a public rally, “It is you who must decide whether the government in Delhi will be run by the sons of Rama (raamzaade) or by bastards (haraamzaade)” referring to the Muslims  The statement caused an uproar in the Parliament. She subsequently expressed regret over her statements and offered to apologize.

Working for the upliftment of the children of the poor and vulnerable sections of society, promoting afforestation for protection of the environment, protection of cows, advocating and promoting social and cultural values, helped in marriages of poor girls. 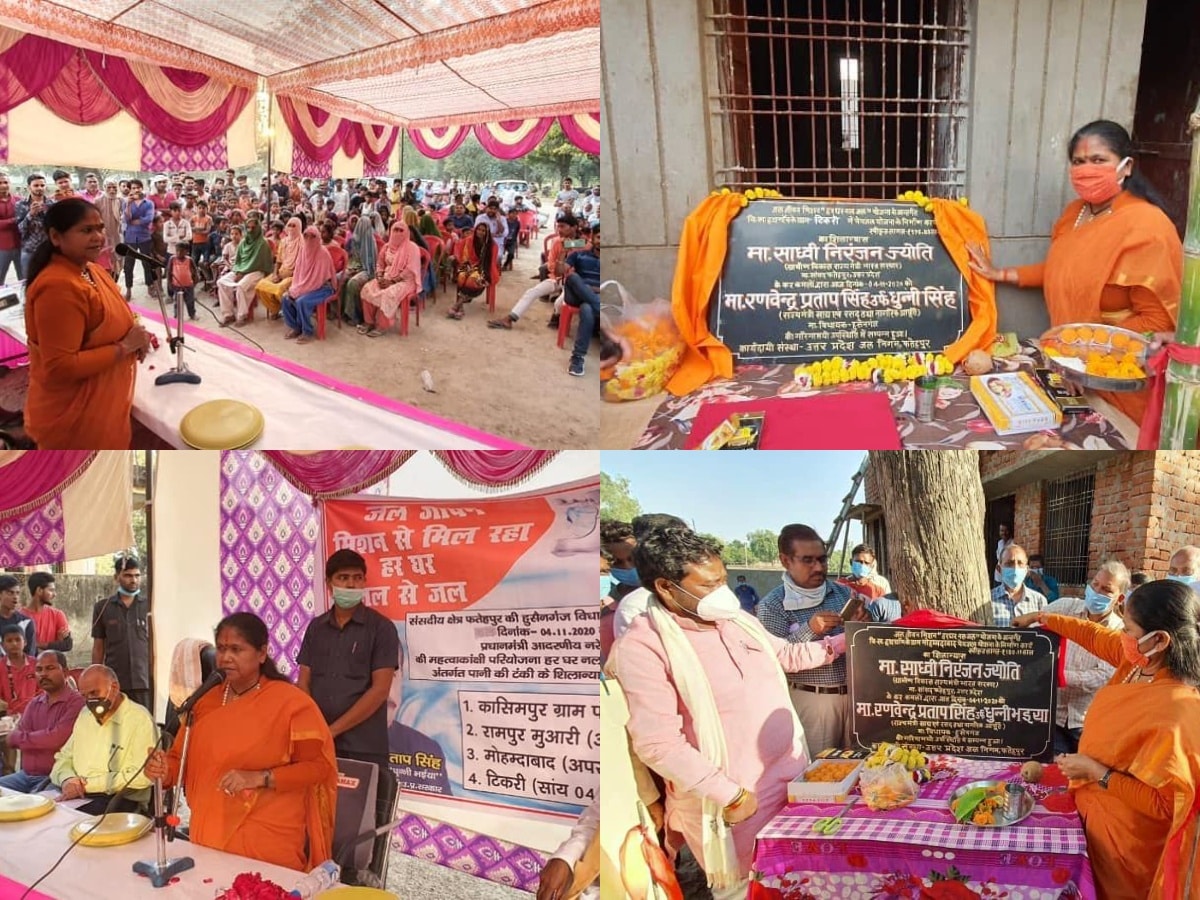 Prime Minister Narendra Modi’s ambitious project in Husanganj assembly of Fatehpur’s parliamentary constituency, under water from tap to water, cost of 180.11 lakh in village Mohammadabad and 176.83 lakh in village Tikri. Layed the foundation stone of the water tank. 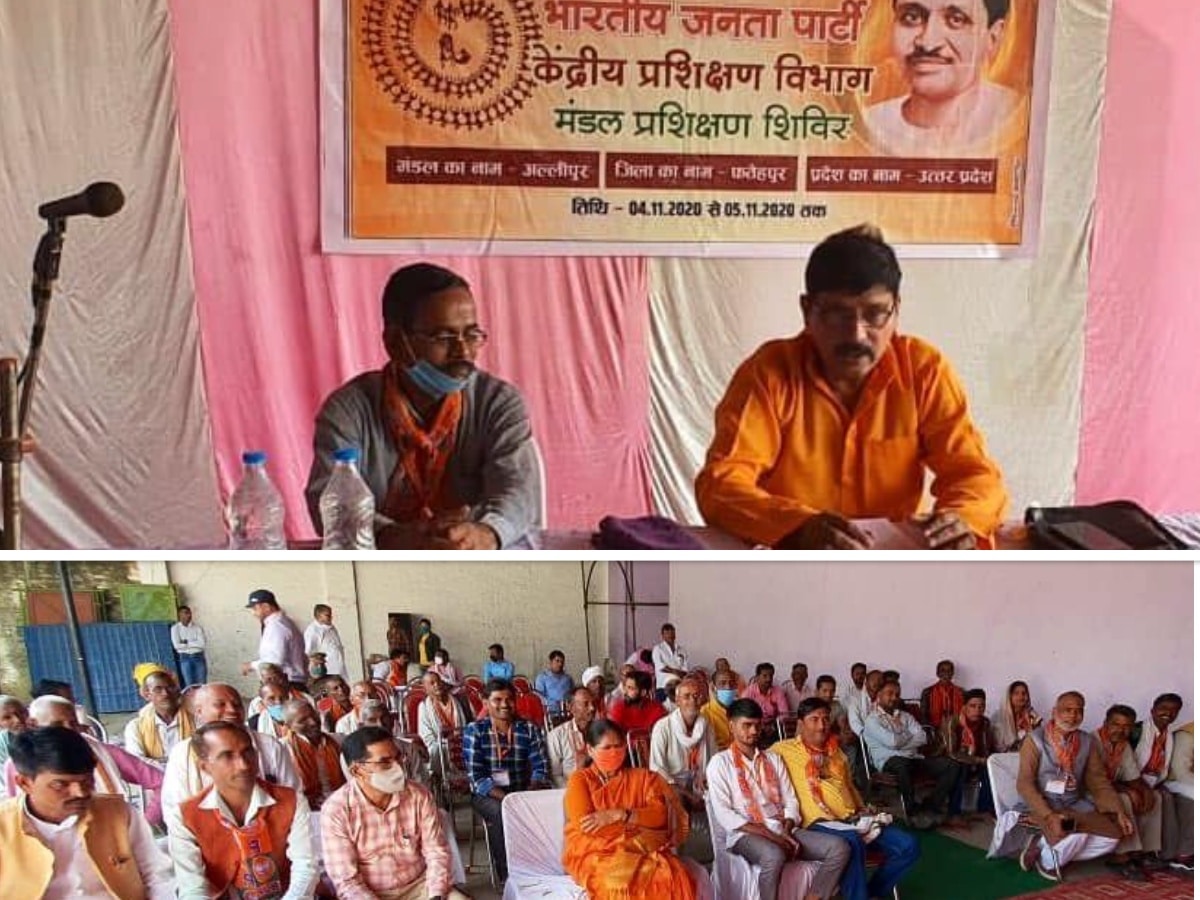 Participated with the workers in the Bharatiya Janata Party’s Mandal Training Camp organized in Allipur Mandal of Fatehpur. 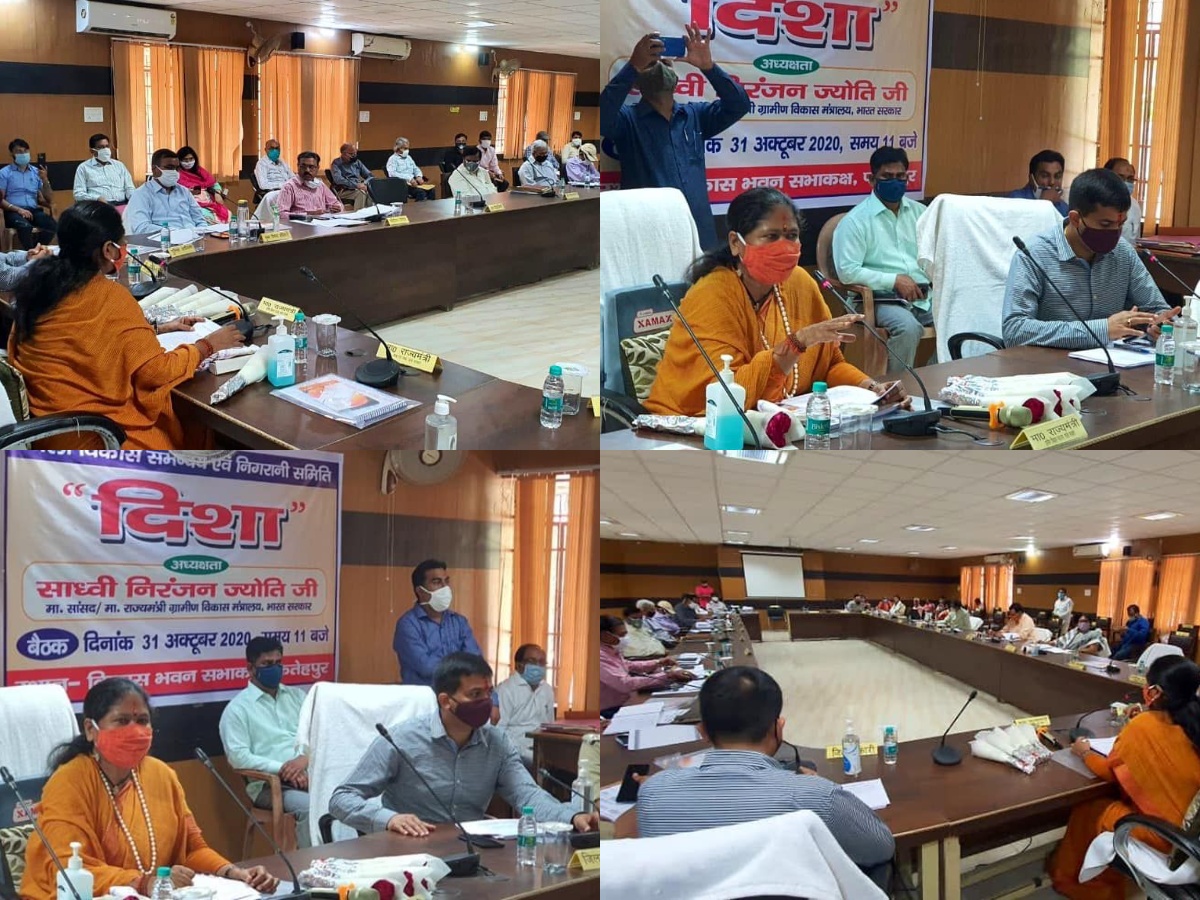 In the meeting of District Development Coordination and Monitoring Committee (Disha) with the administrative officials in Fatehpur, reviewed the implementation of the basic structure schemes related to the district’s face-faced development and received information about the development works for the public. 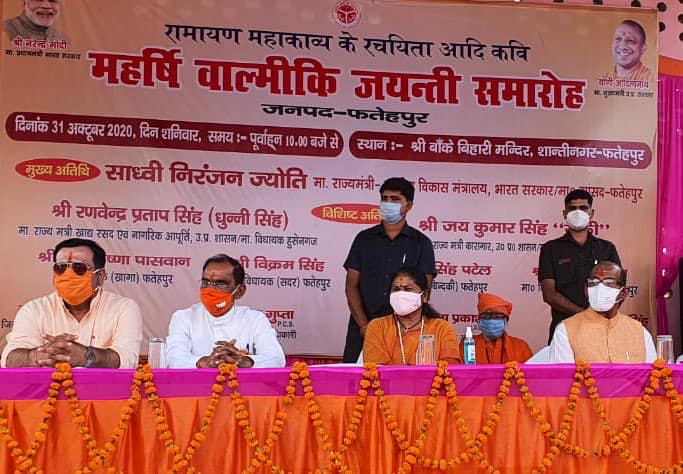 Addressing in the program organized on the occasion of the birth anniversary of Maharishi Valmiki, the creator of epic Ramayana in the parliamentary constituency Fatehpur.
The life of Maharishi Valmiki ji inspires us that no one is bad or good by birth, but our own actions build our character. 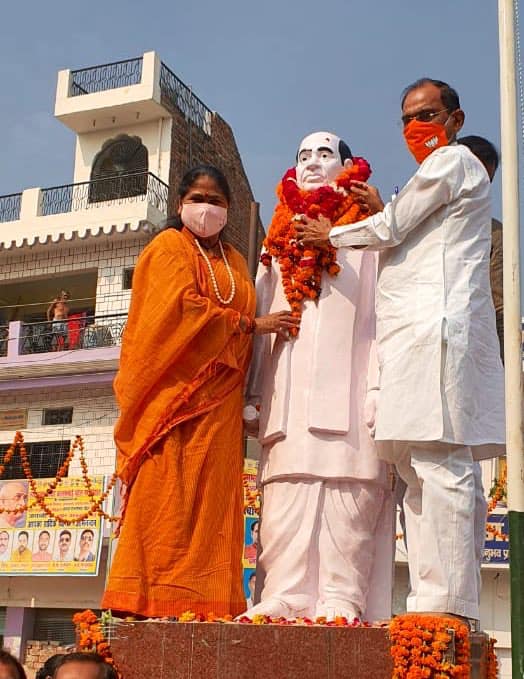 On the occasion of the birth anniversary of ′′ Iron Man ′′ Sardar Vallabh Bhai Patel Ji at Patel Chowk of Fatehpur, everyone present took a pledge to keep the country’s intact forever. On this occasion, Mr. Ashish Mishra (District President), Shri Karan Singh Patel (MLA) and many soulful workers were present. 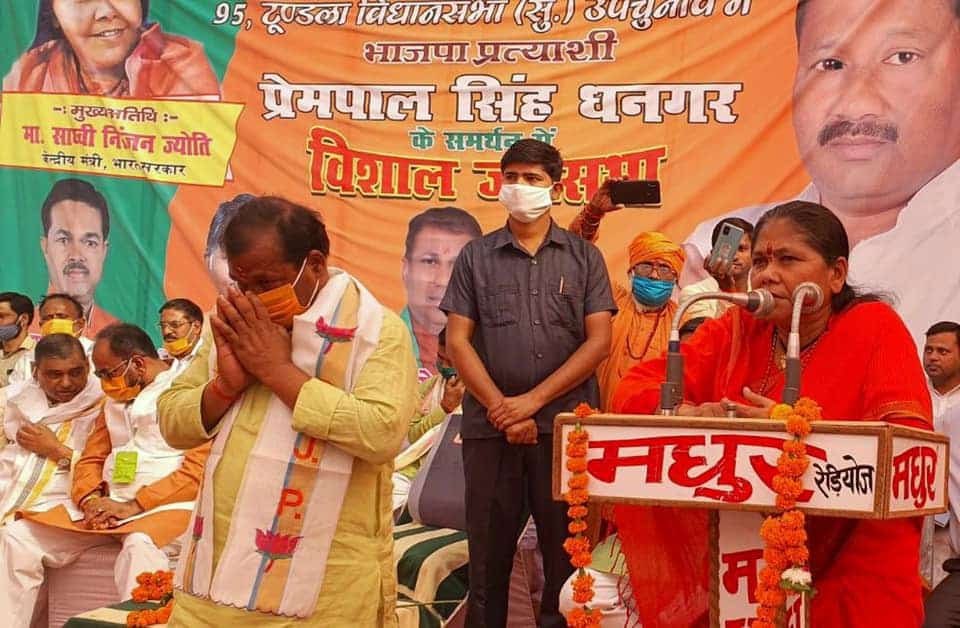 Addressed the public meeting in support of party candidate Shri Prem Singh Dhangar ji in Tundla assembly by-election in Uttar Pradesh and called on the BJP candidate to win by voting in large numbers. 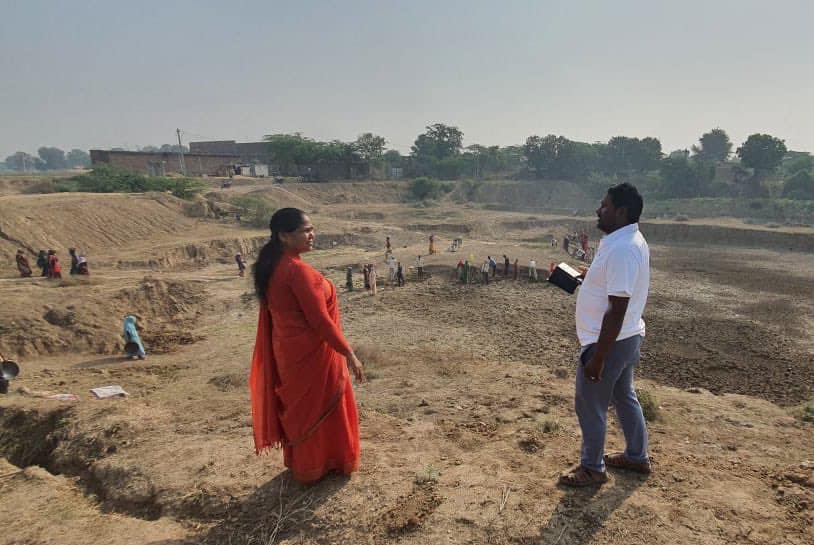 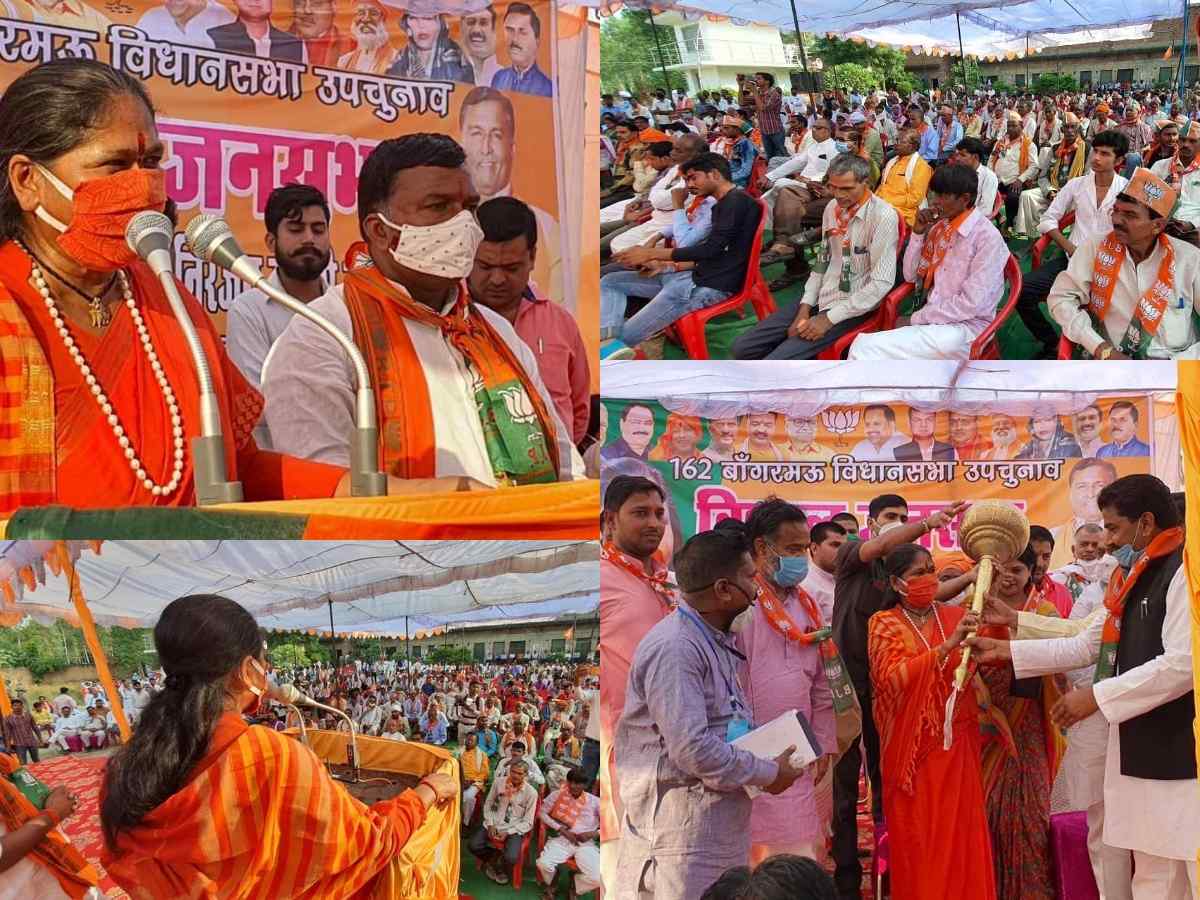 Addressed the public meeting in support of BJP candidate Shrikant Katiyar ji in Bangramau assembly by-election in Uttar Pradesh and called for the lotus flower to win with a huge majority. 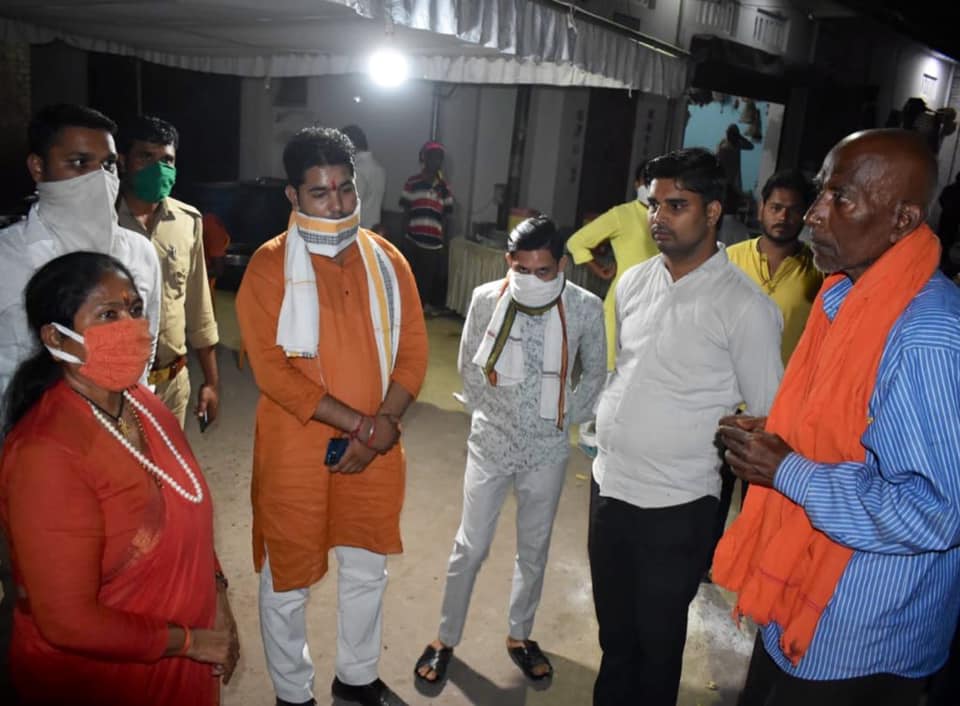 Paid tribute to the departed soul by attending the Trayodashi program of Shri Suresh Vishwakarma ji in Bindki of Fatehpur. On this occasion, Shri Madhuraj Vishwakarma (BJYUMO District President), Shri Ashish Tiwari (District Minister) along with soulful workers were present.

from Harimpur Assembly Constituency of BJP.

for Development of Women and Childrens.

on Social Justice and Empowerment and  Consultative Committee and Ministry of Water Resources.