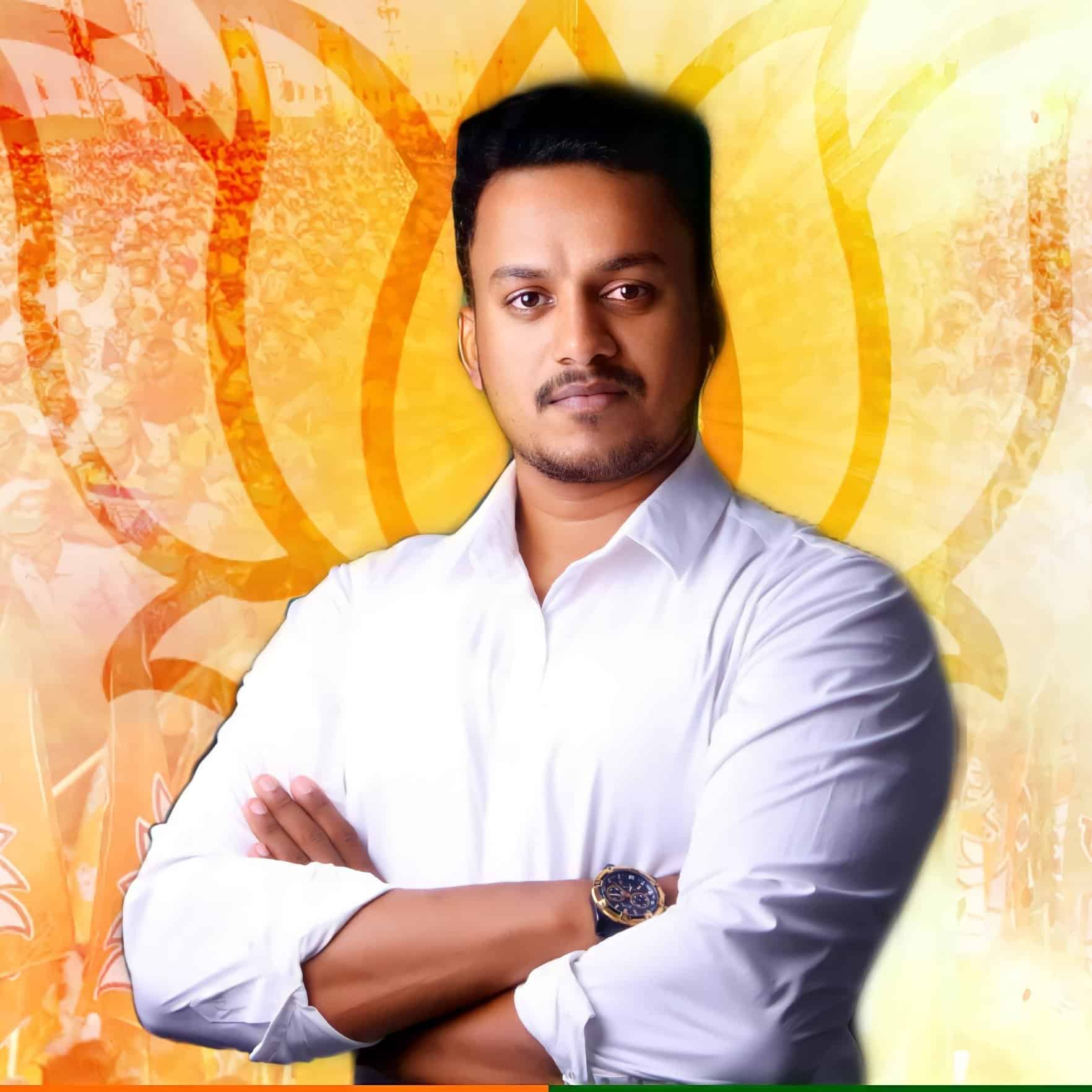 Rudragani Sandeep Goud is a well-known Indian politician and social activist who, rather than constrain his work to a specific area, has broadened his scope by dedicating himself to social service in a variety of disciplines, including politics as the BJYM City General Secretary and through organizations such as the V-Commoners Foundation and Hyderabad Kabaddi Association.

On the 14th of February 1990, Sandeep Goud was born to the couple Mr. Rudragani Gopal Goud and Rudragani Vishnu Vandana and resided in Secunderabad in the Indian State of Telangana.

n the year 2005, Sandeep Goud completed his Secondary Board of Education from Johnson Grammar School located at Nacharam and completed his Undergraduate in 2007 from Sri Chaitanya Junior College resided at Kukatpally.

Sandeep Goud attained his Graduation of B.Tech from B.Tech. in Electronics and Communication Engineering Holy Mary Institute of Technology & Science, Hyderabad in 2011. He attained his undergraduate law degree(Bachelor of Laws) Honors Osmania University in 2021. After receiving the certificate of law, Balaraju began his Professional career as an Advocate by solving the issues raised in society. At Present, he is pursuing his Master of Laws(LLM) with a specialization in Corporate and Financial Law from OP Jindal Global University placed at Delhi.

He had a strong desire to serve in public service since he was a young boy. Sandeep Goud has grown up in a family where he has always been in the service of others. While finishing his education, he also participated in several service activities.

Sandeep Goud, who has had a strong belief in service from childhood, aspires to provide all of the services to the people in attainment.
Sandeep Goud became a politician upon joining the Bharatiya Janata Party (BJP), rising to become the party’s leader in 2019.

In 2019, he stepped up his commitment and effort by accepting the coveted post of BJYM City Vice President of Hyderabad from the BJP, and he worked in that capacity.

After acquiring the authority and carrying out all activities as his commitment to the welfare of the people and by fully complying with a code of conduct, Sandeep Goud was elevated as the BJYM City General Secretary of Mahankali Secunderabad from the BJP party in 2021.

Founded to support the uplift, growth, and progress of underprivileged people, “V-Commoners Foundation” was founded to turn the group into a registered organization. The Foundation was headed by Mr. Sandeep Goud, who served as its Founder and Chairman.

According to the V-Commoners Foundation, everyone has the right to a healthy, active, and dignified life. Integrating our programs and services, Foundation has evolved beyond welfare to development and long-term sustainability for the poor and marginalized people.

They aspire for a future when poverty is abolished and people may live their lives with dignity and security.

With a life-cycle approach to development, providing a process to bring permanent change to the lives of underprivileged children, youth, women, and the elderly.

By providing empowerment for such disadvantaged and marginalized communities, They aid to minimize their poverty and social exclusion. 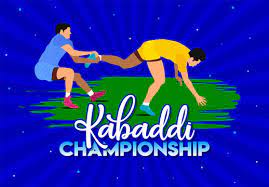 Coming from a Middle family he never gives up his interest, Since childhood, Sandeep has exhibited zeal for Kabaddi. As Kabaddi is the only combative sport in which offensive is an individual effort but defense is a collective effort. History also indicates that the Gautam Buddha played Kabaddi for amusement at an early age.

Sandeep spent his formative years in his studies, He was immensely inspired by the Kabaddi Players ahead of time and it was very difficult to keep him silent. He was a natural in whatever he did and was particularly pleased with his attitude. Apart from that, Sandeep has been associated with the Hyderbad Kabaddi Association and has been serving the Association as a President with an objective that aims for people in maintaining their health always fit through the game. It also aims to develop the skills of self-defense, attack as well as survival.

“ “Leadership cannot just go along to get along. Leadership must meet the moral challenge of the day.” 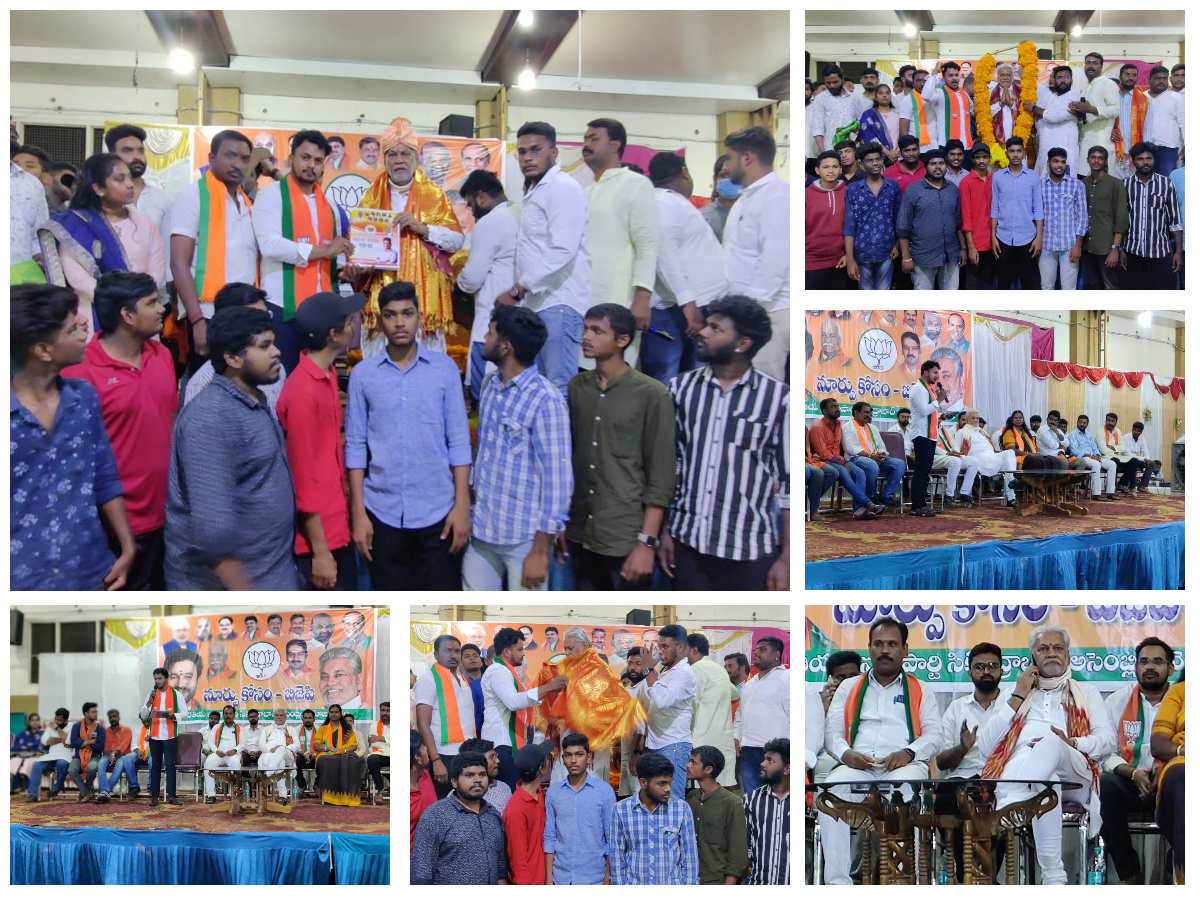 Sandeep and the other leaders of the party paid their respects to the senior party leader. 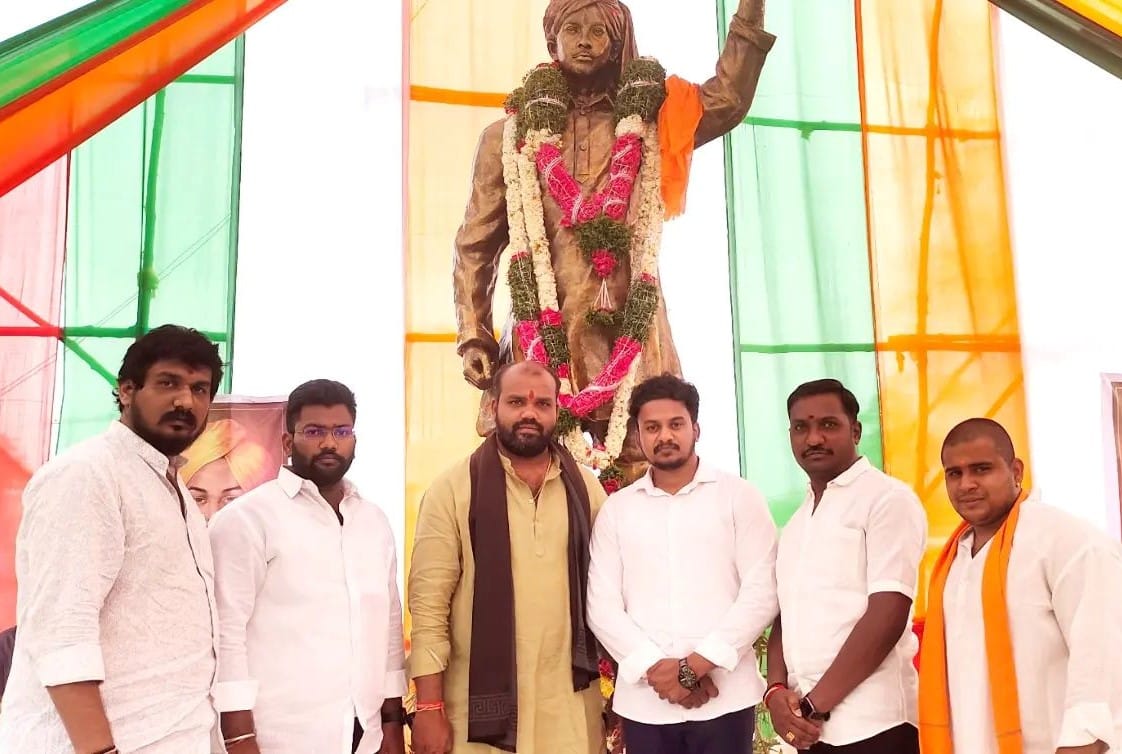 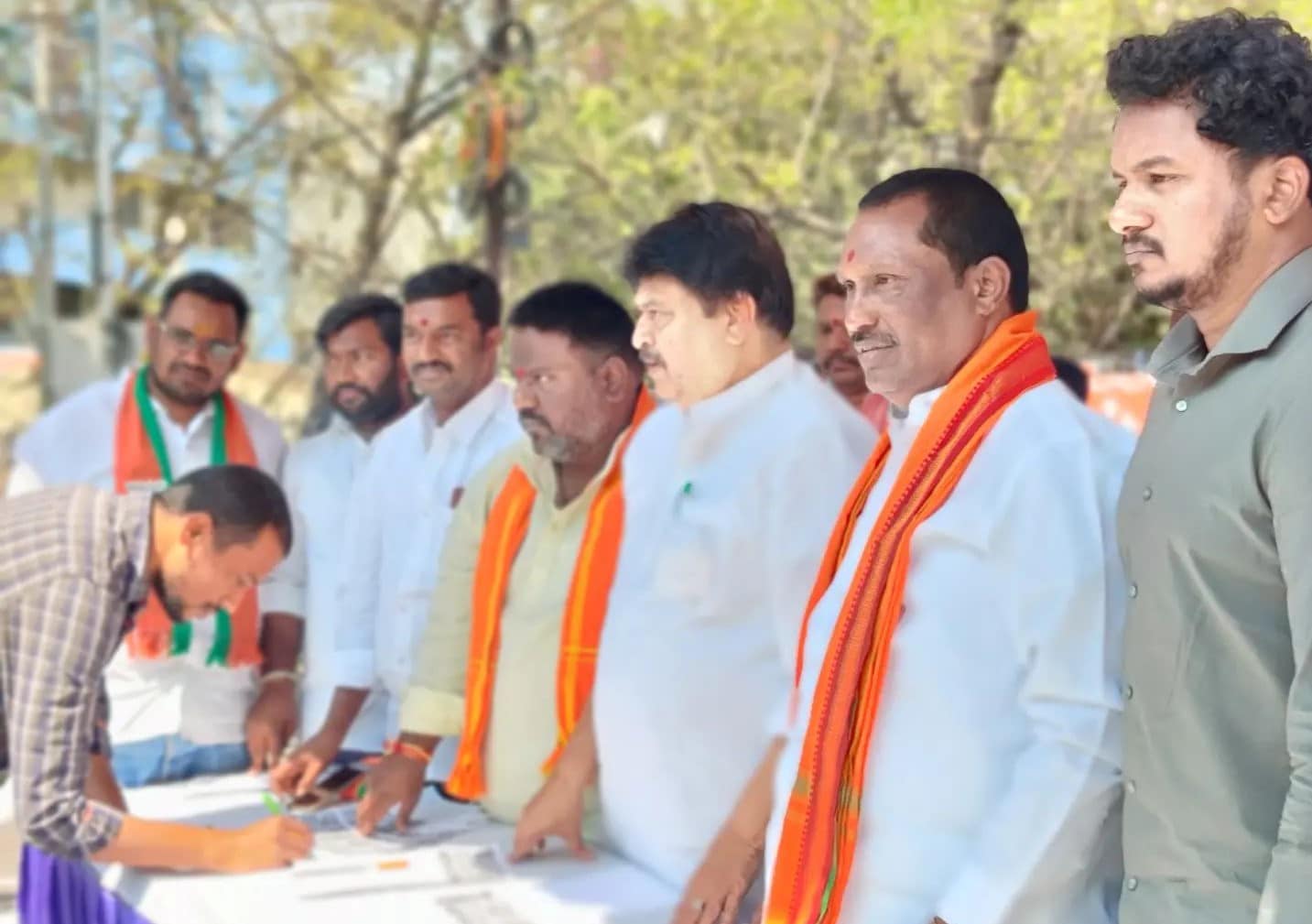 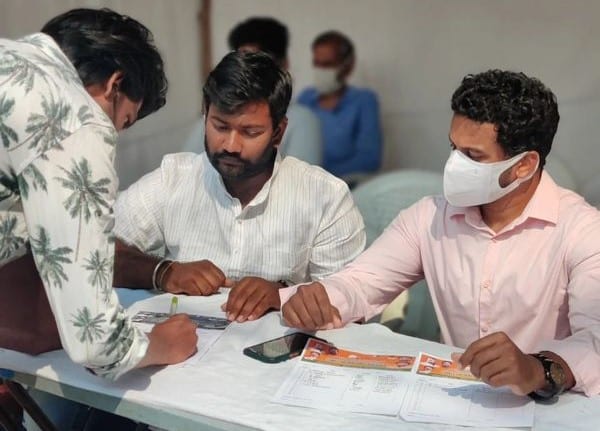 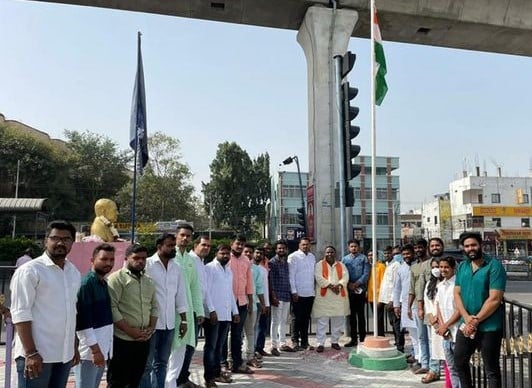 In Mettuguda and Seethaphalmandi Divisions, as well as in the Secunderabad Constituency, BJYM will be celebrating Republic Day. In attendance at the flag-raising event, which was presided over by our City President Shri Madduri Shivaji, were BJYM City Office Bearers, Senior BJP Leaders, and Committee Members, Division Presidents & Committees, and other dignitaries. 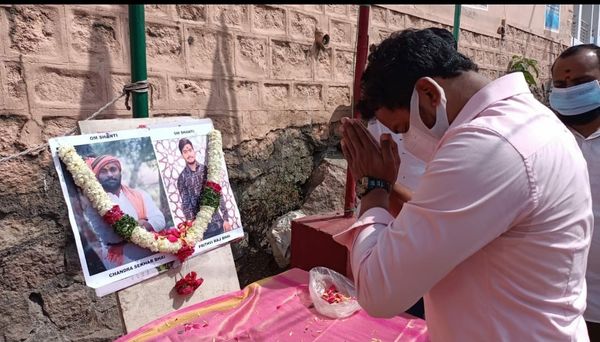 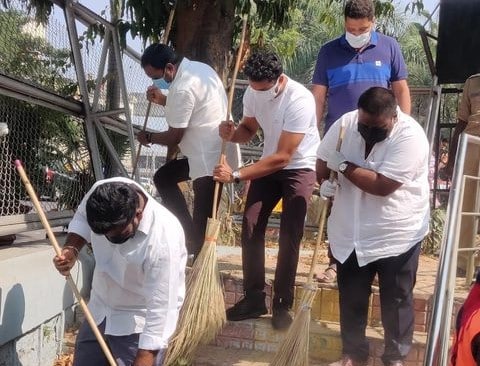 Swachh Bharat Program
A team from the City BJYM and karyakartas participated in the Swacch Bharat Program at the Clock Tower in Secunderabad at the Martyrs Memorial whose sacrifices laid the foundation for the State of Telangana, where the dictatorial rule of the Chief Minister on using government machinery to imprison innocent individuals and the illegal arrest of democratically elected leaders by suppressing their voice in all possible forms while abusing constitutional positions & privileges have taken place. 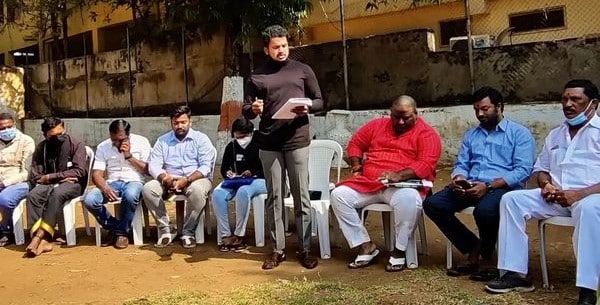 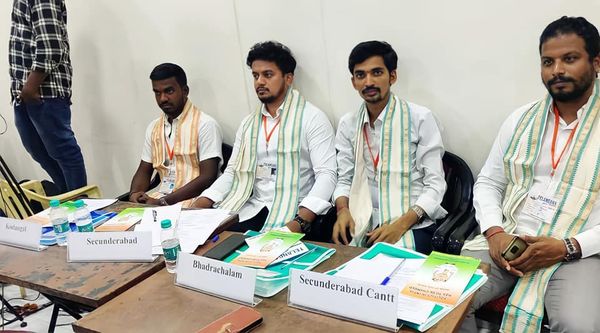 Condolence to the Mallikarjun
On 10th Nov 2021 BJYM District meeting was held at Seethaphalmandi, Secunderabad with District Office Bearers & District Committee paying condolences to Late Shri. Mallikarjun Ji who lost his life battling Viral Fever, serving our organization & society in different capacities contributing to the welfare of everyone. 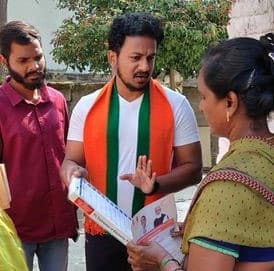 Election Campaign
Voters eagerly anticipating the election day are fully aware of this chance to cast their vote in support of Shri Etela Rajender for Democracy to prevail in its true meaning at the Huzurabad, Kamalapur Mandal, Shenigaram Village By-election campaign with BJYM Mahankali Zilla President & Principal Officers. 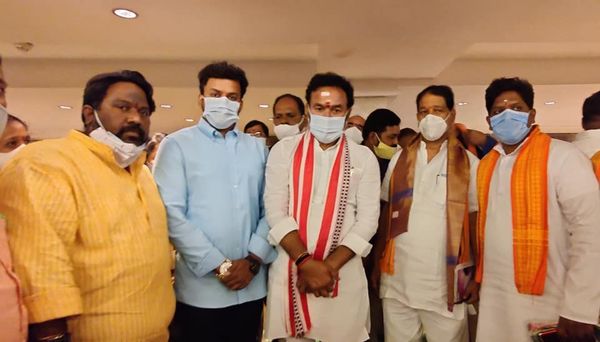 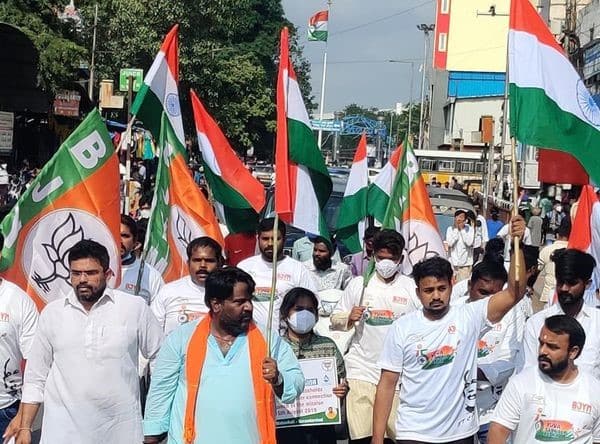 Azadika Amrit Mahotsav
On the eve of the 75th year of Indian Independence Day, BJYM karyakartas hailing from Hyderabad, (Mahankali-Secunderabad Zilla) have organized various programs celebrating azadika amrit mahotsav by participating in ‘RaashtraGaan’ on the call given by our National BJYM President Shri Tejasvi Surya Ji. BJYM Karyakartas in multiples of hundred has participated in a walkathon ‘Yuva Sankalp Yatra’ for 7.5 km reaching Tank Bund 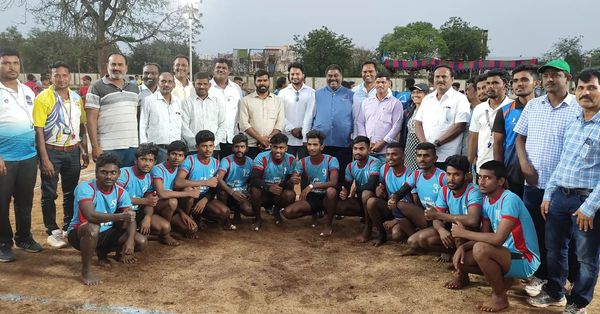 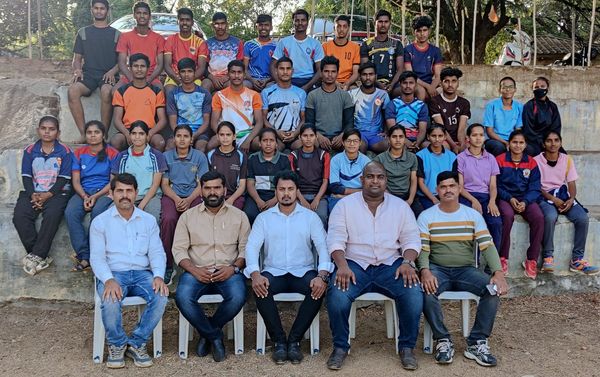 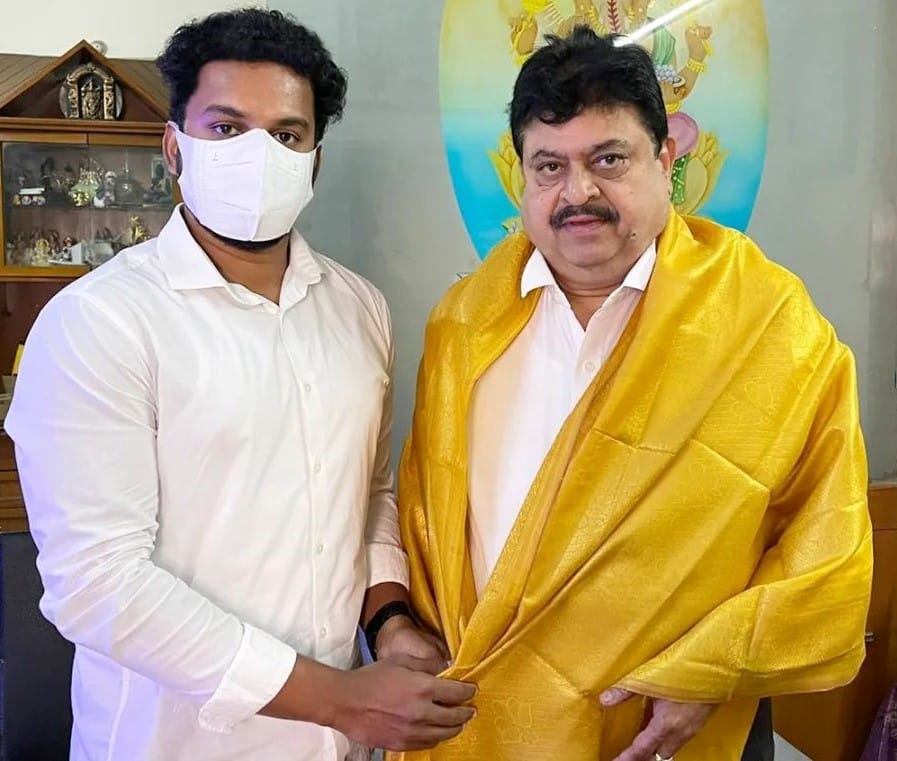 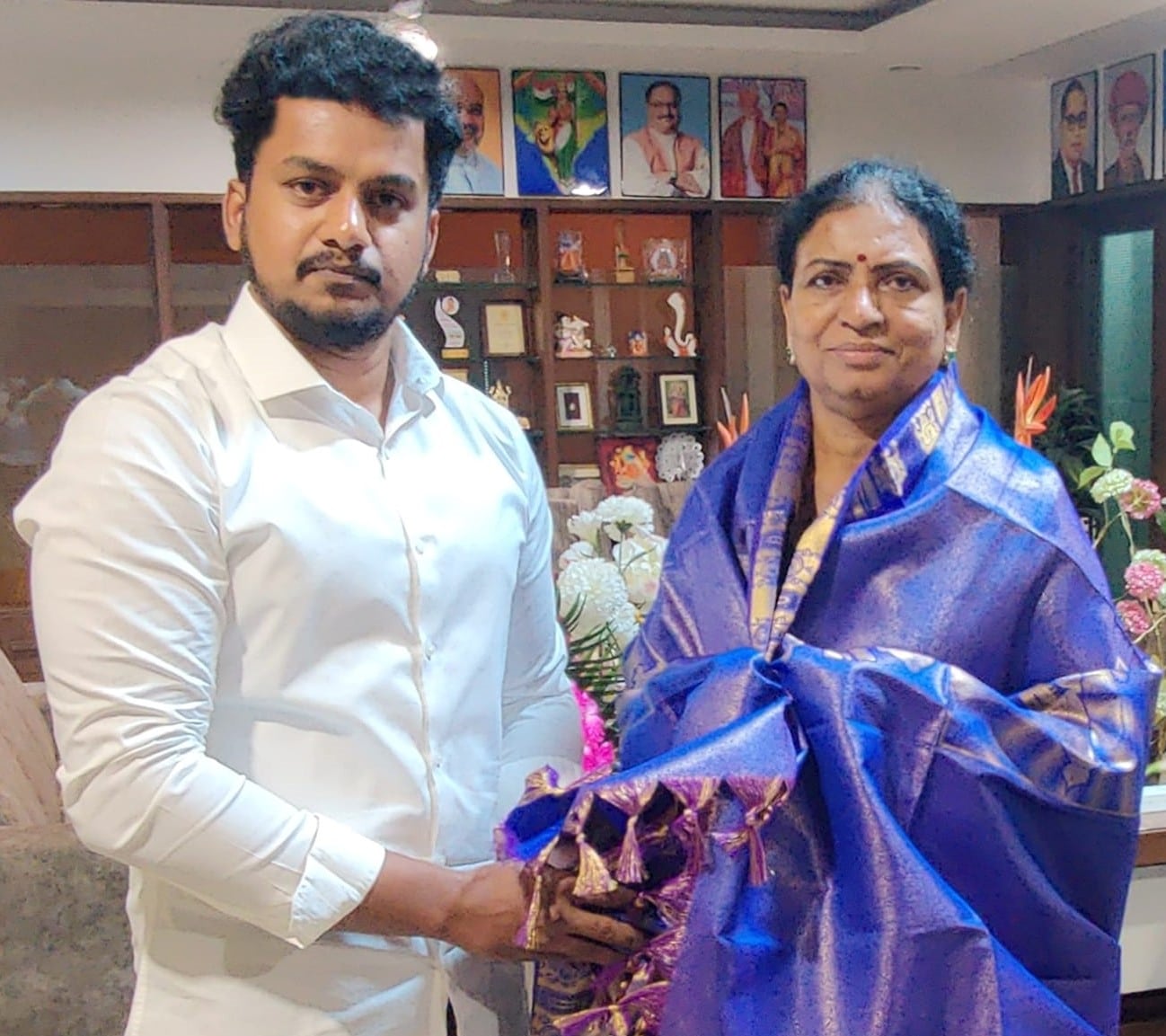 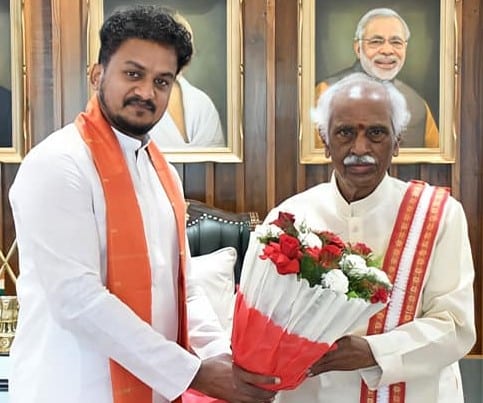 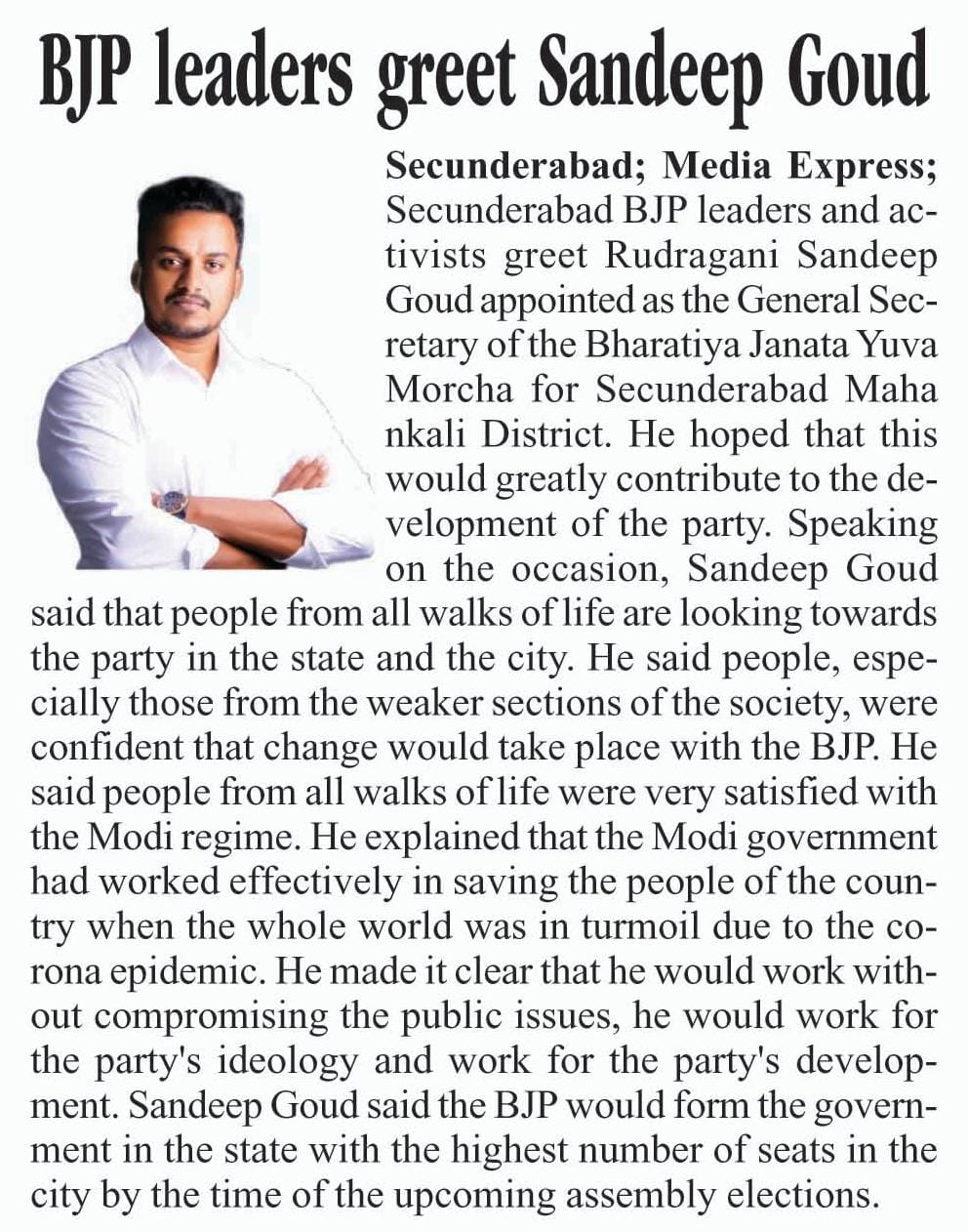 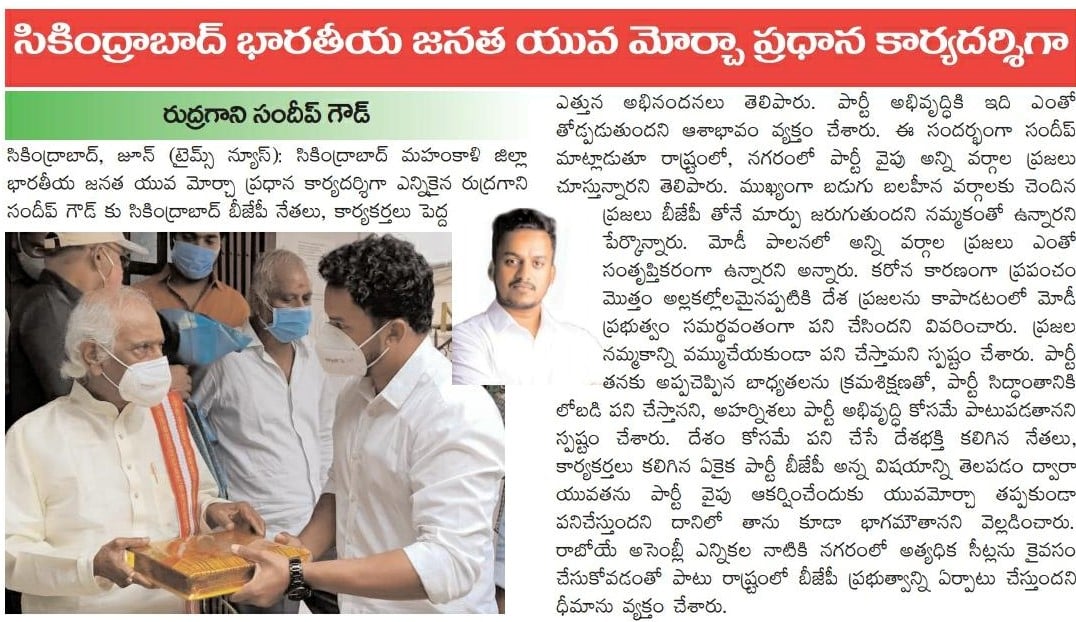 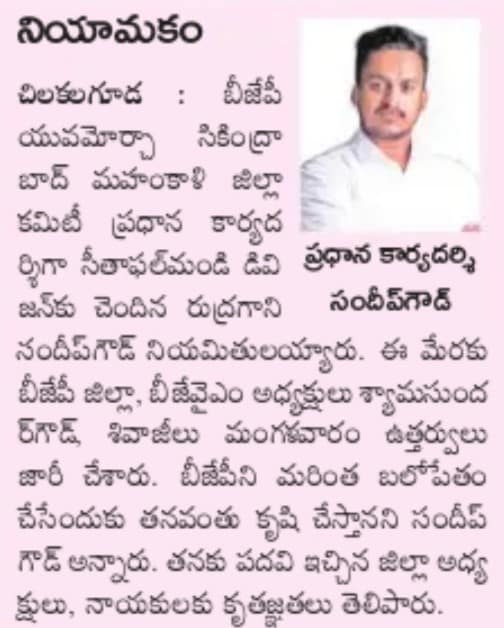 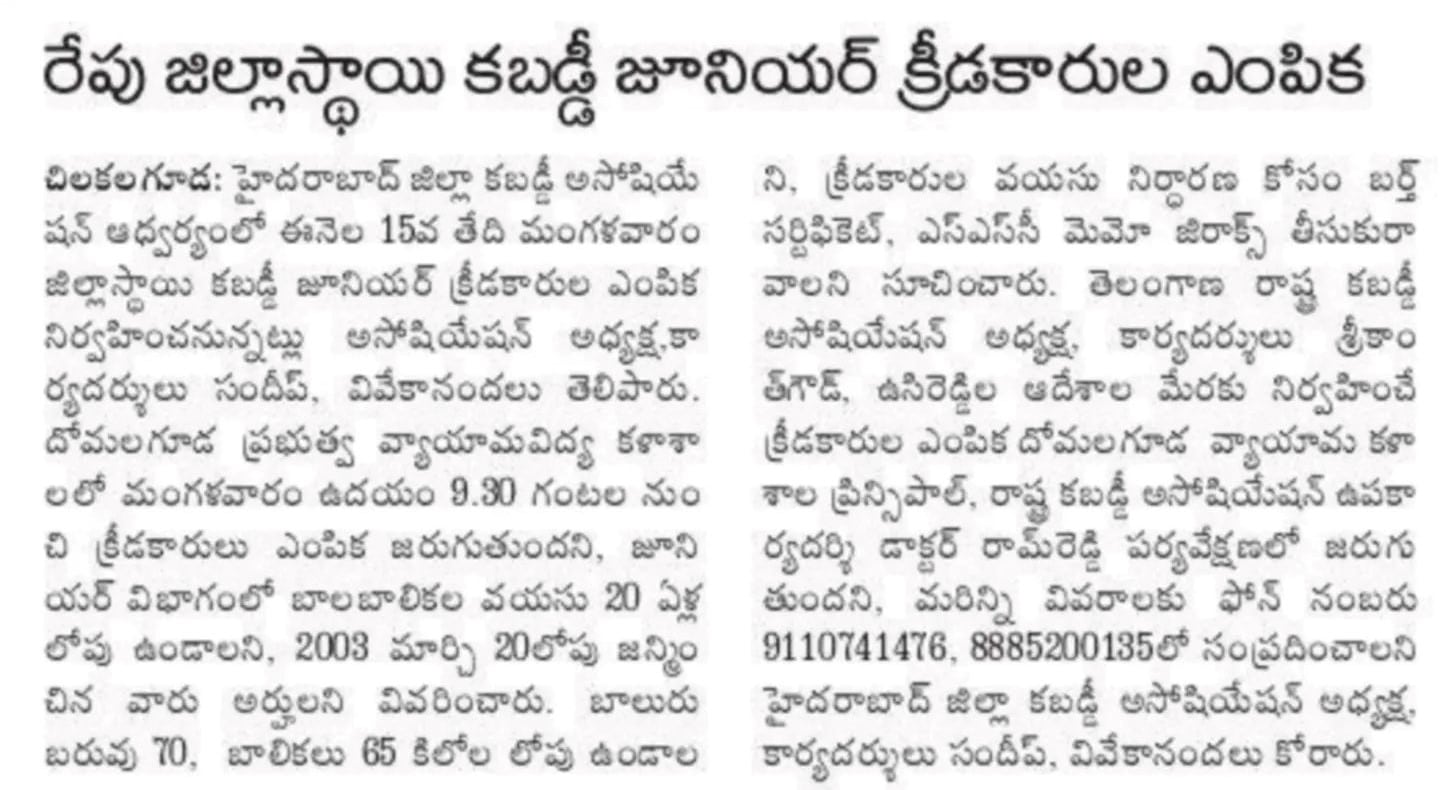