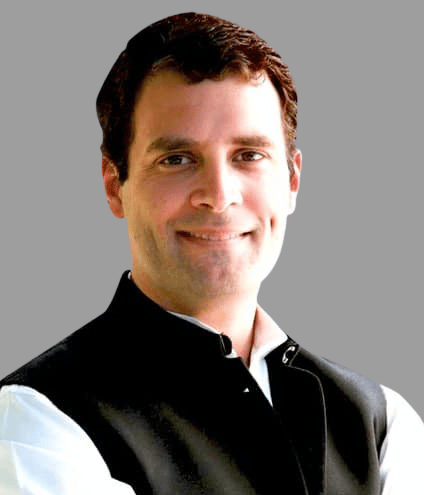 He attained his Primary Education in New Delhi and Dehradun but was later homeschooled because of security concerns. He graduated with a B. A degree from Rollins College, Florida, and an M.Phil from Cambridge. In 1996, Gandhi worked at the Monitor Group, a management consulting firm in London. In 2002, He was appointed as one of the Directors of Mumbai-based technology outsourcing firm Backups Services Private Ltd.

He entered into politics in 2004 with the Indian National Congress(INC) party. In 2004, He won as Member of Parliament(MP) to 14th Lok Sabha from Amethi constituency. He was the Member of the Standing Committee on Home Affairs from 2004–2006 and Member of the Standing Committee on Human Resource Development from 2006–2009. Rahul Gandhi was appointed as General Secretary of the All India Congress Committee on 24-September-2007 in a reshuffle of the party secretariat. In the same reshuffle, he was also given charge of the Indian Youth Congress and the National Students Union of India. He has been working as Chairperson of the Indian Youth Congress and Chairperson of NSUI.

He Re-elected to the 15th Lok Sabha in 2009 from the same constituency by defeating his nearest rival by a margin of over 370,000 votes. Rahul was credited with the Congress revival in Uttar Pradesh. Rahul served as a Member of the Standing Committee on Human Resource Development and a Member of the Consultative Committee on Rural Development. In May 2011, Rahul Gandhi was arrested by the Uttar Pradesh Police at Bhatta Parsaul village after he turned out in support of agitating farmers demanding more compensation for their land being acquired for a highway project. Rahul Gandhi campaigned during the 2012 Assembly elections in the politically crucial Uttar Pradesh election for almost two months, holding 200 rallies. However, Congress ranked as the fourth party in the state.

From 2013-2016, Gandhi worked as Congress Vice-President. He led the INC’s campaign in the 2014 Indian general elections. He contested the 2014 Indian general election from his constituency, Amethi. He held the Amethi seat by defeating his nearest rival, BJP’s Smriti Irani, by a reduced margin of 107,000 votes. Gandhi addressed the farmer and worker’s rally, named as Kisan Khet Mazdoor Rally in Ramlila Maidan on 19 April 2015. Here he made “references to his agitations in Niyamgiri in Orissa and Bhatta-Parsaul in Greater Noida in Uttar Pradesh”. The rally was attended by 1 lakh people. He served as President of INC from 2017-2019.

Rahul Gandhi won the Wayanad seat in the 2019 general elections. However, he lost his existing seat of Amethi to BJP’s Smriti Irani by a margin of 55,120 votes. He worked as the Member of the Standing Committee on Defence and Member of the Consultative Committee, Ministry of External Affairs. He is also a trustee of the Rajiv Gandhi Foundation and Rajiv Gandhi Charitable Trust.

Gandhi has pushed for the empowerment of women. He backed the Women’s Reservation Bill which would allow 33% reservation of all Lok Sabha and state legislative assembly seats for women. This bill passed the Rajya Sabha on 09-March-2010. On the social front, he is associated with Rajiv Gandhi Foundation, Jawaharlal Nehru Memorial Fund, Sanjay Gandhi Memorial Trust, and Rajiv Gandhi Charitable Trust, and Indira Gandhi Memorial Trust. Also, he runs a non-profit eye care provider in Uttar Pradesh. 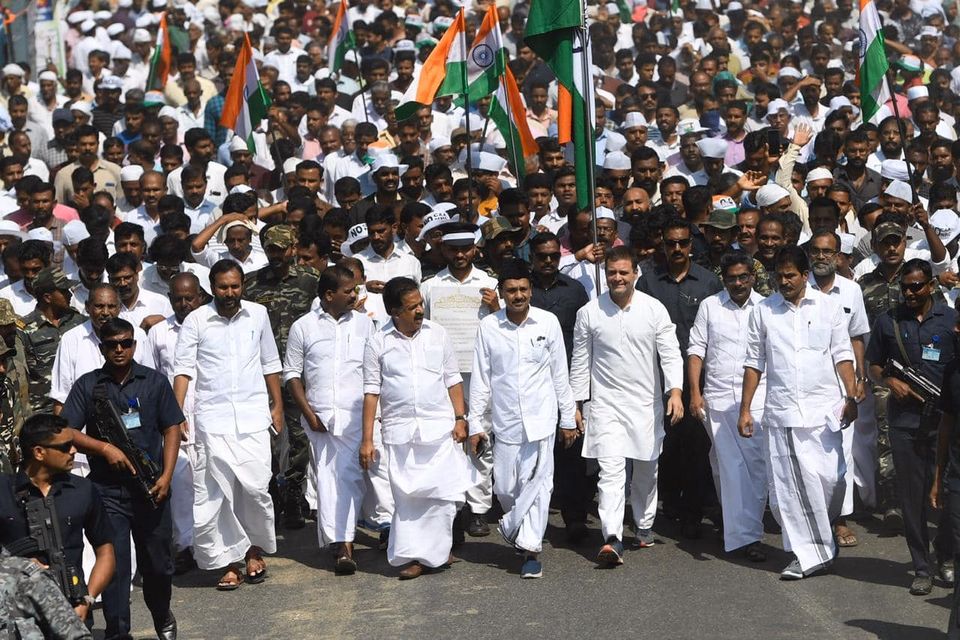 Rahul Gandhi said thank the people of Wayanad for their support for Save the Constitution march. The people of India must firmly stand up against the ideology of hate that killed Mahatma Gandhi.

A delegation of Congress leaders presented the NHRC with evidence of the atrocities against the citizens of UP by the State Govt., which has gone to war against its own people. The NHRC must act decisively to protect the idea of India & the Constitutional rights of our citizens.

Congress President Smt.Sonia Gandhi and Rahul Gandhi met all the winning candidates who waving the flag of the Congress Party’s victory in Chhattisgarh urban body elections. Chief Minister Bhupesh Baghel and his allies’ ministers of cabinet were also present in this meeting. 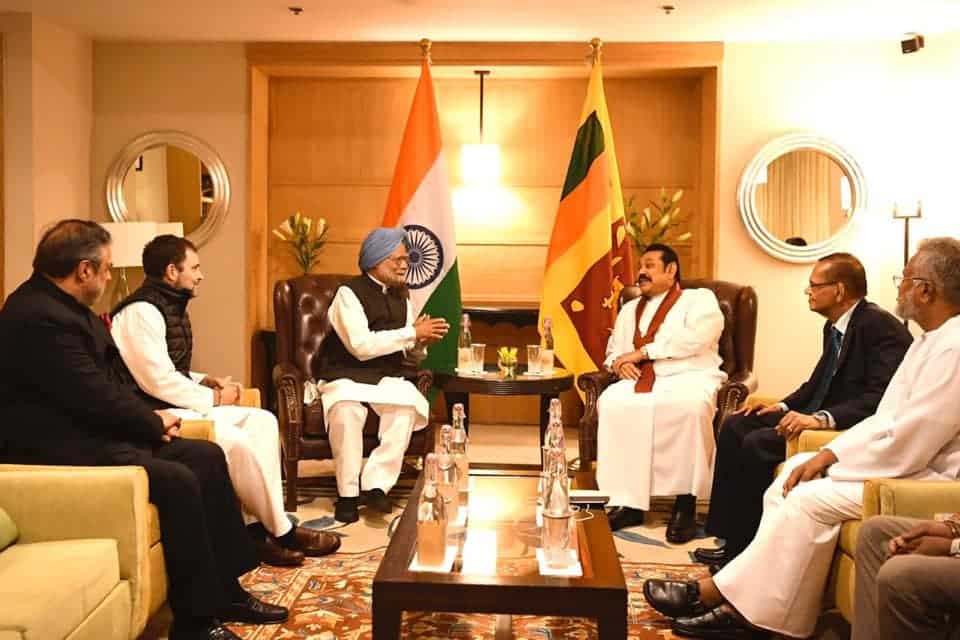 A delegation of Congress Party leaders met with H E Mahinda Rajapaksa, PM of Sri Lanka in Delhi yesterday. We had a friendly & cordial discussion on a wide range of issues, including ways to strengthen the relationship between our two countries. 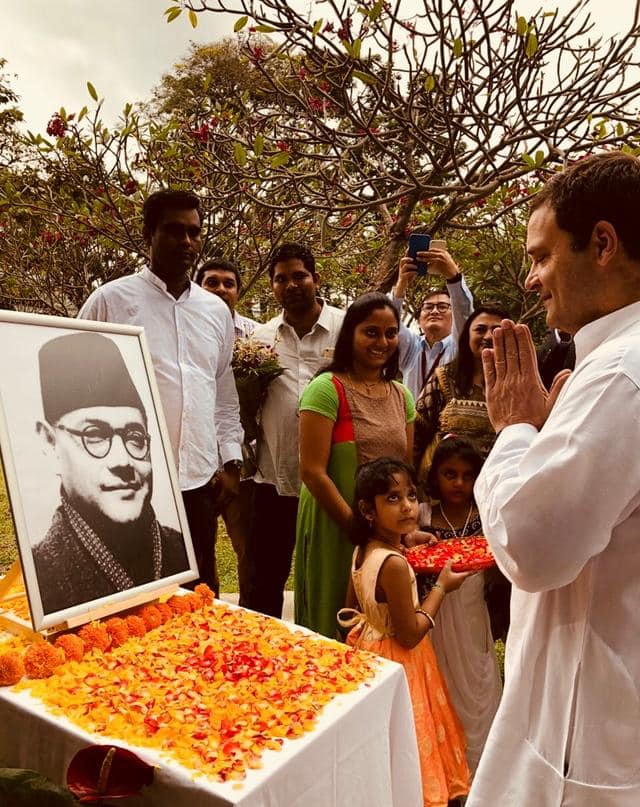 Rahul Gandhi has paid tribute to the former President of Congress and the great leader of the country’s freedom, leader Subhash Chandra Bose on his death anniversary. 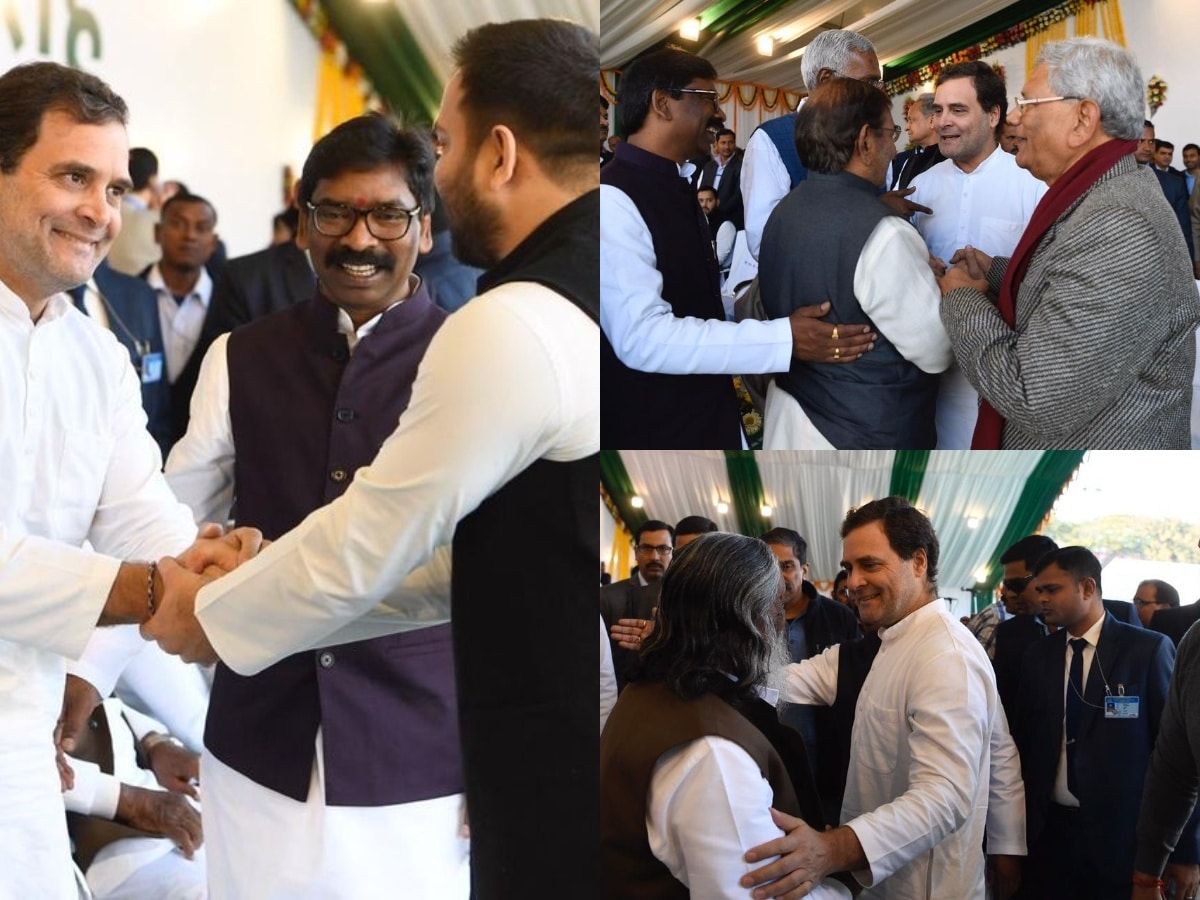 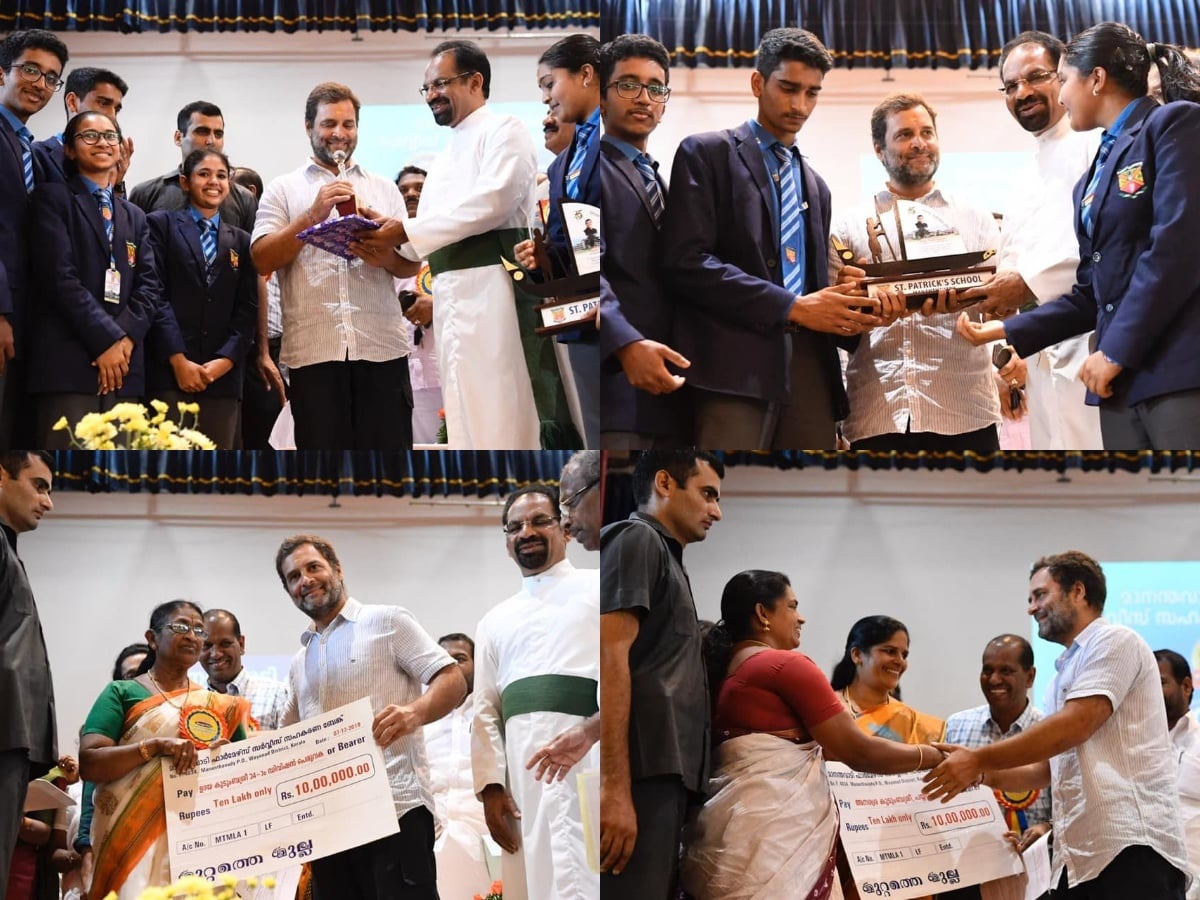 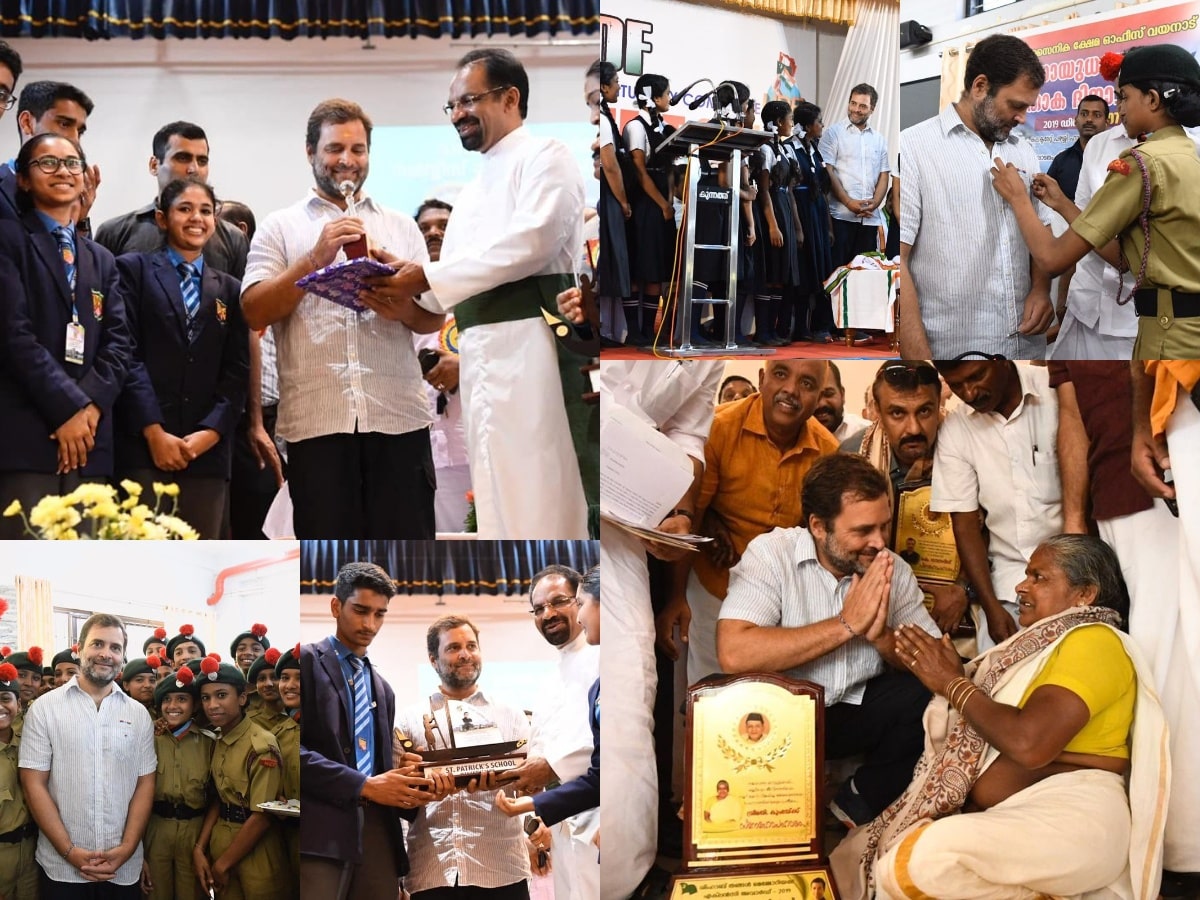 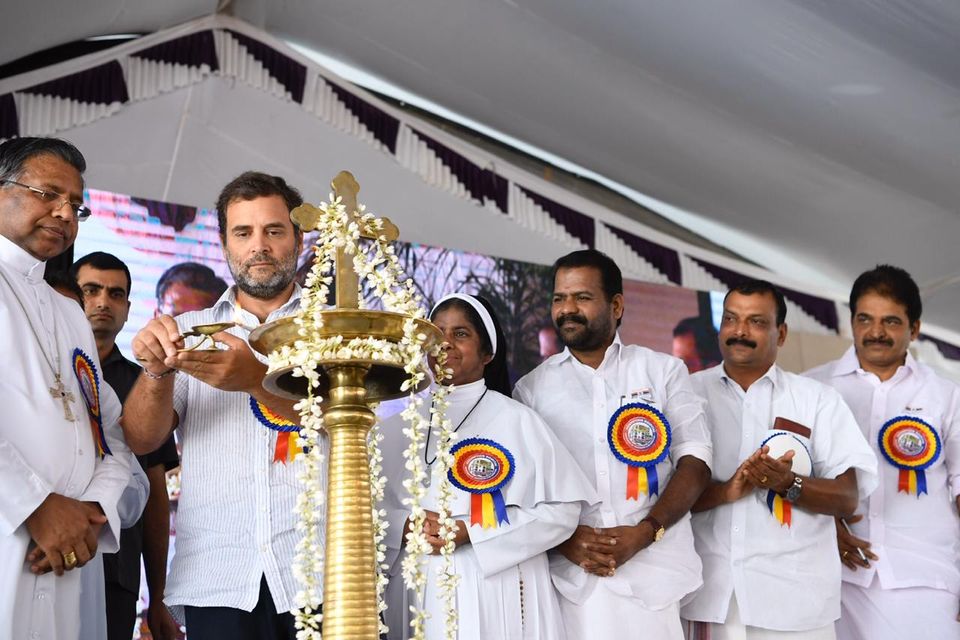 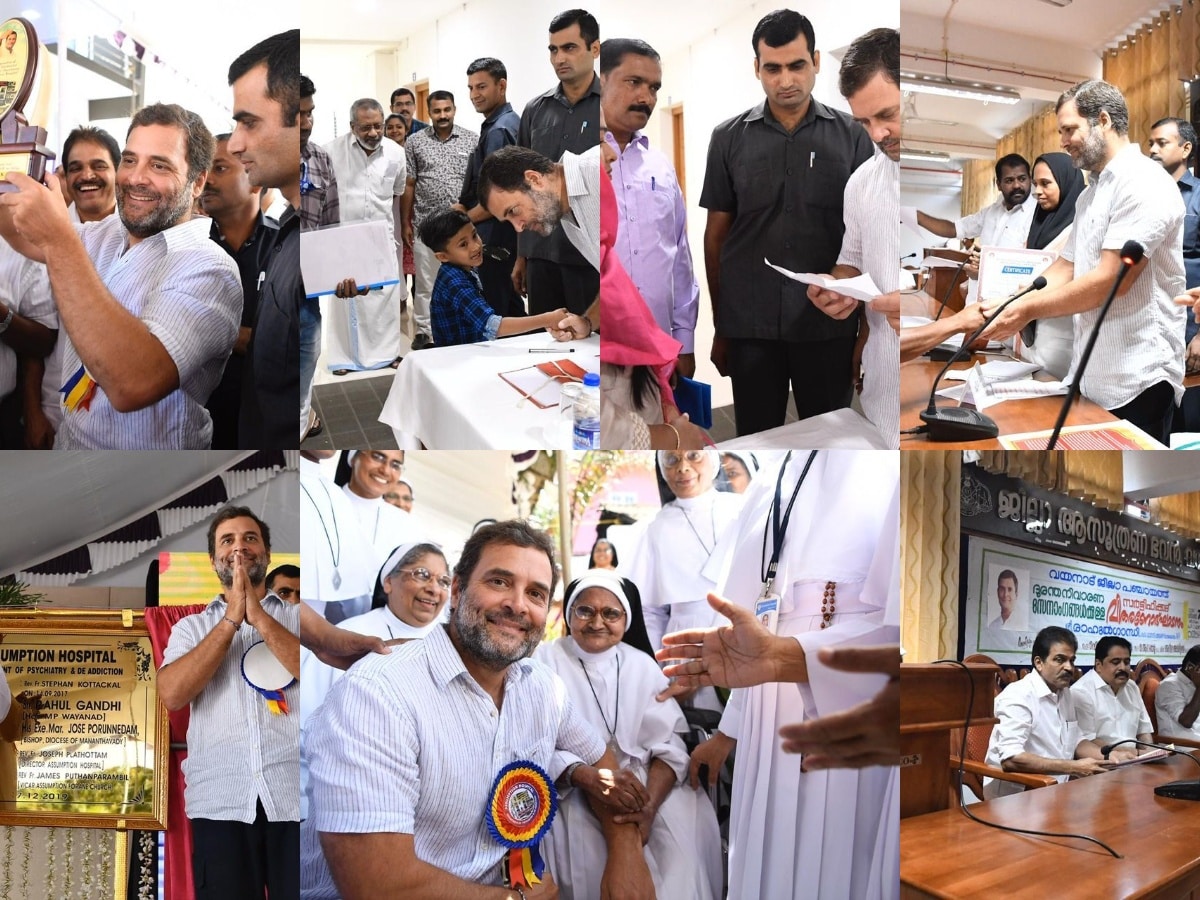 of the All India Congress Committee

to the 15th Lok Sabha from the Amethi constituency

of Consultative Committee on Rural Development

to the 16th Lok Sabha from Amethi Constituency

to the 17th Lok Sabha from Wayanad constituency

of Standing Committee on Defence

Rajiv Gandhi was a man with a tremendous vision, far ahead of his times. But above all else, he was a compassionate and loving human being.

I am incredibly lucky and proud to have him as my father.

We miss him today and everyday. pic.twitter.com/jWUUZQklTi

Wishing every one a happy #RakshaBandhan.

Today as we remember our 40 CRPF martyrs in the #PulwamaAttack , let us ask:

1. Who benefitted the most from the attack?

2. What is the outcome of the inquiry into the attack?

3. Who in the BJP Govt has yet been held accountable for the security lapses that allowed the attack? pic.twitter.com/KZLbdOkLK5

A delegation of Congress leaders presented the NHRC with evidence of the atrocities against the citizens of UP by the State Govt., which has gone to war against its own people. The NHRC must act decisively to protect the idea of India & the Constitutional rights of our citizens. pic.twitter.com/lR6wcOYjFv

I attended the swearing in ceremony of CM Hemant Soren Ji & ministers from the Congress party in Ranchi today. I'm confident that the new Govt in Jharkhand will work for the benefit of all citizens & usher in an era of peace & prosperity in the state. pic.twitter.com/nIg1svJ0uL

Today is the 135th #CongressFoundationDay.
I will attend the flag hoisting ceremony at the AICC this morning & later a public rally in Guwahati, Assam.

On our foundation day, let us acknowledge the selfless contribution of millions of Congress men & women through the ages. pic.twitter.com/EmtvImZrJr

As a part of an official delegation, I today met with the PM of the Republic of Korea, His Excellency, Lee Nak-yon and other officials, in Seoul. We discussed a wide range of issues, including the current political & economic situation in our respective countries. pic.twitter.com/0ILEg5j20Z

I am in my parliamentary constituency, Wayanad, for the next few days. I’m grateful for the love, support and enthusiasm of the people of Wayanad who’ve turned up in large numbers to greet me. I thank you all 🙏 pic.twitter.com/m1IvG8LzVv

It is ironic that on the day India was celebrating its Constitution, the BJP government was busy working to destroy it.

The Constitution belongs to every Indian. Let us pledge to uphold its values & defend it at all costs. pic.twitter.com/8iC4AAcsOn

Highly profitable & strategic, the Container Corporation (CONCOR) is a PSU jewel that some of the PM's greedy crony capitalist friends are hungry for & the Govt plans to sell.

I met members of the CONCOR union today. Please share their attached petition & support their cause. pic.twitter.com/26mMHBPixM

I am in Surat today to appear in a defamation case filed against me by my political opponents, desperate to silence me.

I am grateful for the love & support of the Congress workers who have gathered here to express their solidarity with me. #SatyamevJayate pic.twitter.com/HZmAcEhciu

I am in Wayanad, Kerala to stand in solidarity with the youth who have been on hunger strike, protesting against the travel ban on National Highway 766. Earlier I visited those who have had to be hospitalised, as a result of the prolonged fast. pic.twitter.com/eVqbHWMZJG

I’m in my parliamentary constituency, Wayanad, for the next few days, visiting flood relief camps and reviewing rehabilitation work in the area. Much has been accomplished, but there’s so much more that still needs to be done. pic.twitter.com/XmibDD524V

I left Wayanad with nothing but pride for the people I represent.

The display of bravery and dignity in the face of immense tragedy is truly humbling.

It is such an honour and pleasure to be your MP.

Thank you all for your best wishes & greetings on my birthday. I’m overwhelmed & grateful for your love & affection 🙏 pic.twitter.com/VZG9s49hOF

Today is the 2nd day of my 3 day tour of Wayanad, Kerala that I now represent as MP.

I’m humbled by the love & affection showered on me by the people of Wayanad, as I tour the constituency.

I thank you all for your support! pic.twitter.com/rXc6JaaWu0

The Congress Party may have just 52 Lok Sabha members, but we will work together like a pride of brave hearted lions to protect our Constitution & Institutions & to fearlessly do our duty as the leading Opposition party. The BJP will have no walkover in Parliament. pic.twitter.com/Rx8aUZcqn3