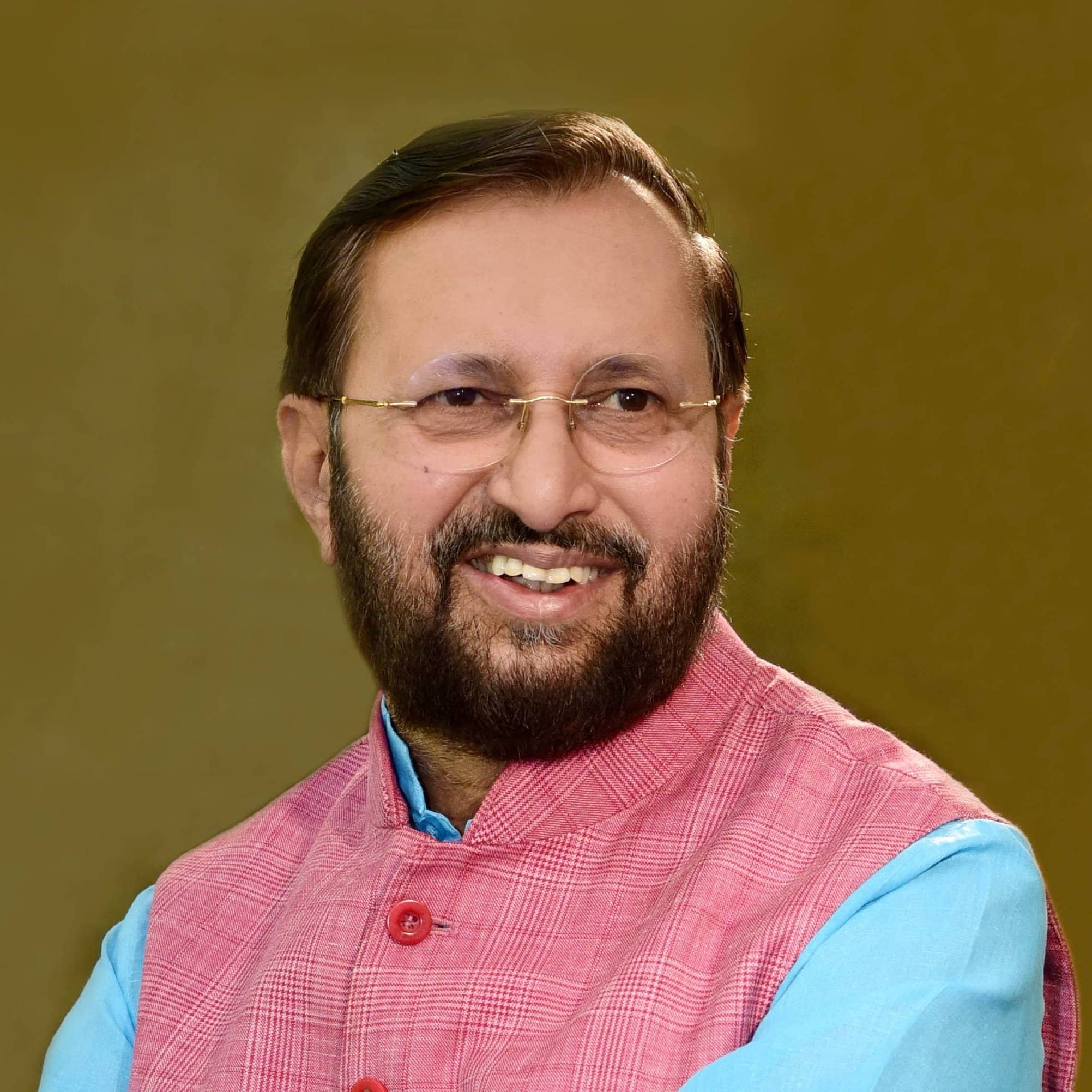 Prakash Keshav Javadekar is an Indian politician. He is a member of the Bharatiya Janata Party (BJP) and currently serving as the Minister of Environment, Forest and Climate Change, Minister of Information and Broadcasting, and Ministry of Heavy Industries and Public Enterprises.

Prakash Javadekar was born to Shri. Keshav Krishna Javadekar and Smt. Rajani Javadekar on 01-30-1951, in Pune. His father was a journalist with the ‘Kesari’, a Marathi newspaper founded by the revolutionary leader Lokamanya Bal Gangadhar Tilak. His mother was a primary school teacher. He completed his early schooling from a Zilla Parishad School and high school from the Government Aided High School in the Tehsil Town of Mahad, District Raigad in Maharashtra.

Since his school days, he was influenced by the work of Rashtriya Swayamsewak Sangh and its services for the nation and thus, became a member of the RSS. His wife Dr. Prachee Javadekar is an education researcher and consultant and is a former Director of Indira Institute of Management, Pune. He has two sons Dr. Ashutosh Javadekar who is a dentist and an artist, and Apoorva Javadekar, who is Assistant Professor of Finance at Indian School of Business

During the early years of his career, he worked with a Public Sector Bank in Maharashtra State for about a decade from 1970 to 1981 and also for the Akhil Bharatiya Vidyarthi Parishad during the same period. Thereafter, he left the job and started to work full time for the Bharatiya Janata Party (BJP) since its formation on the 6th of April, 1980. He has held a number of key positions in various Organizations, Committees, and the Government. He is most renowned for his contribution as a charismatic Spokesperson of the Bharatiya Janata Party.

Student Politics and a BJP Karyakarta:

Prakash Javadekar joined the Akhil Bharatiya Vidyarthi Parishad (ABVP) in 1969 which proved to be a stepping stone for his political journey. In 1972, under the leadership of Late Shri Gopinath Mundeji, Prakash Javadekar was the Secretary of a Committee of Students which felicitated Shri Jaiprakash Narayanji. During his college days in M.E.S. College of Commerce, Pune, he became closely acquainted with renowned Professor of History Late Shri Shreepati Shastri and RSS Pracharak Late Shri Damu Anna Date, who played a vital role in shaping his political ideology. Prof. Yashwantrao Kelkar and Prof. Bal Apte of the ABVP were also great influencers in those days.

Being a proactive student leader during these days, he led various Students’ Agitations successfully. Due to his popularity amongst students owing to his selfless and dedicated work, he was elected as Senate Member of Pune University in 1975.

The darkest period in Independent India’s history came in 1975 when the Emergency was imposed by the then Indira Gandhi Government. There was a national call to fight and restore democracy and freedom of expression. By this time, Prakash Javadekar had graduated and was working with the Bank of Maharashtra, but he had remained active within the ABVP.

Under his leadership, ABVP organized a Satyagraha in 11 colleges in Pune at 11 a.m., on 11th December 1975 to protest against the Emergency rule. As a student leader and member of the Senate, he offered Satyagraha on the premises of Pune University. Soon he was arrested and put in the Yerawada Jail, first under preventive detention, in which he was sentenced for 3 months and later under MISA (Maintenance of Internal Security Act) for over 13 months.

However, the authoritarian regime could not stop Prakash Javadekar’s fight for democracy. Even in jail, he along with fellow activists started a weekly titled ‘Nirbhay’ which became very popular among the 400-odd political prisoners there. Influenced deeply by the then RSS Chief Shri Balasaheb Devras, who was also detained in Yerawada Jail, he organized various programs along with his colleagues inside the jail against the Emergency.

That proved to be a major turning point in the life of Prakash Javadekar. Thereafter, he has always remained active in public life. He joined the Bharatiya Janata Party in 1980 on its formation.

To focus and concentrate on the party work, Prakash Javadekar resigned from Bank of Maharashtra in 1981 and started working as a full-time worker of the Bharatiya Janata Party (BJP). He was assigned the responsibility of General Secretary of Bharatiya Janta Yuva Morch (BJYM). He worked relentlessly in the State of Maharashtra and in the subsequent year was made the Member of National Executive of BJYM and National Convener of Unemployment Cell of BJYM. He wrote extensively on the issues relating to unemployment and organized various protests in the State and at the National level on the issue of unemployment.

Prakash Javadekar, along with other leaders, spearheaded the ‘Sangharsha Rath’ a yatra throughout Maharashtra and mobilized thousands of youth in Mumbai on March 10, 1989. This was a first of its kind ‘Rath’ deployed by the BJYM or the BJP. He was meanwhile elevated as All India Secretary and General Secretary of BJYM under the leadership of Kalraj Mishraji, Satyadev Singhji, Pramod Mahajanji, and Rajnath Singhji. He was an invitee of the American Council of Young Political Leaders (ACYPL) in 1985. Thereafter, he shouldered a number of responsibilities in the party, as a lawmaker, and in the Government.

Prakash Javadekar has played a crucial role as a party Spokesperson. Right from contributing to the Media strategy to the drafting of Election Manifestos, his role has always been appreciated. During the Atal Bihari Vajpayee Government, Shri Javadekar was appointed as BJP’s National Spokesperson in 2003. This was the beginning of his political leadership at the National front.

As the National Spokesperson, his insistence on a deep study of issues brought forth the scams of the previous UPA government including the NSEL scam, 2G Scam, Coal Scam, and Maharashtra Government’s irrigation scam. One such definitive moment was when his complaint compelled the Central Vigilance Commission to seek a probe in the Coal Scam.
These expose played important role in the downfall of the UPA government and the landslide victory of the NDA in the subsequent 2014 Lok Sabha Elections

A career as a Legislator:

Prakash Javadekar was elected to the Maharashtra Legislative Council from Pune Region Graduate Constituency in June 1990. He got re-elected in 1996 and continued till 2002. During this period, he was actively raising his voice on issues of criminalization of politics and corruption within and outside the House. He was also given the responsibility of a Spokesperson of BJP, Maharashtra. Acting as Chief of Publicity Wing of State BJP, he produced six very popular docu-dramas and films for various elections.

Shri Javadekar is presently in his third term as a Rajya Sabha member. First, he was elected to the Upper House from Maharashtra in May 2008. His second term as a Rajya Sabha member was from Madhya Pradesh from June 2014 to March 2018. Since April 2018, Prakash Javadekar has been a member of Rajya Sabha representing Maharashtra. As a proactive parliamentarian, he has served with distinction in Parliamentary Standing Committees of Defence, HRD, and Consultative Committee of Power. He was also a member of the Committee on Subordinate Legislation. During his first tenure as Member of Rajya Sabha, he vociferously raised his voice on a number of issues like farmers’ welfare, labor and pension laws, the formation of Telangana, pressing economic issues before the country, and most importantly he shed light on a number of scams.

Prakash Javadekar is currently Union Minister for Environment, Forest & Climate Change (EFCC), Information & Broadcasting (I&B), and Heavy Industries & Public Enterprises (HI&PE) in the PM Narendra Modiji-led NDA Government’s second term. During the 2014-19 NDA government, Prakash Javadekar was inducted into the Council of Ministers as Minister of State (Independent Charge) for Environment, Forest & Climate Change and Information & Broadcasting. and also the Minister of State for Parliamentary Affairs. He was elevated as a Cabinet Minister on July 5, 2016, and assigned the Human Resource Development portfolio.

A voracious reader and an articulate writer, Prakash Javadekar has written a number of booklets on several issues that affect the Common Man. In his public life, he has fought against unemployment, poverty, inequality, and justice and the same sentiments are visible in his writings.

His first book, ‘Bekaricha Jwalamukhi’ (1986) highlighted the grave issue of unemployment. He critiqued IMF loans in the book ‘Nanenidhiche Karz’ (1987). Farmers’ issues have taken center stage in his political journey. He has addressed the critical issue of farm loan waivers in ‘Shetkaryanchi Karzmukti’ (1988). Higher inflation is a major problem that severely affects the poor, on which his book ‘Mahagaicha Bhasmasoor’ (1999) is based.

Prakash Javadekar met Prachee (Medha Dravid), an eco-activist in the Akhil Bharatiya Vidyarthi Parishad (ABVP) in 1974. As a student activist, she had opposed the Emergency of 1975 vehemently, for which she was jailed. They married in December 1977 and have two sons, Ashutosh and Apoorva. Dr. Prachee Javadekar is a renowned Educationist and Researcher.

Dr. Ashutosh Javadekar is a popular and critically acclaimed writer and singer-music composer. While he stood first in the University of Pune while pursuing an MA in English, his graduation is in dentistry and he is a practicing dentist as well. His wife, Dr. Manasi Javadekar, Ph.D. is working as a professor in a management institute. Aarohi Javadekar, their daughter, is nine years old and has been in the news recently for her handwritten news bulletin during the lockdown.

Dr. Apoorva obtained his Ph.D. in Economics from Boston University and is currently working as Asst. Prof of Finance at the Indian School of Business, Hyderabad. Revati, his spouse is a Law student and a national badminton player and has represented India in multiple events.
Besides having excellent academic credentials, the family has a keen interest in the literature and arts.

Development Work in the Khutiya village of Madhya Pradesh:

Campaigning for the party:

Connecting People with the Party’s Philosophy: 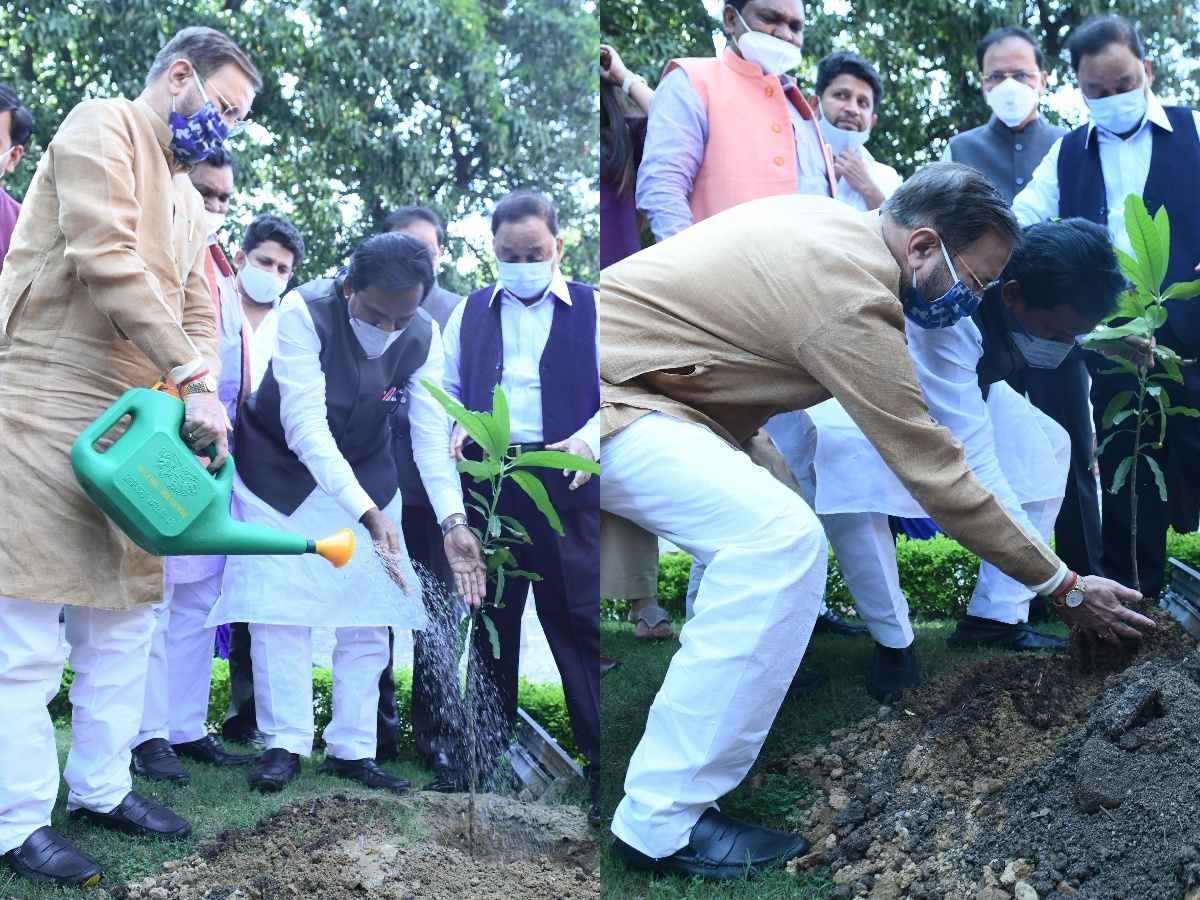 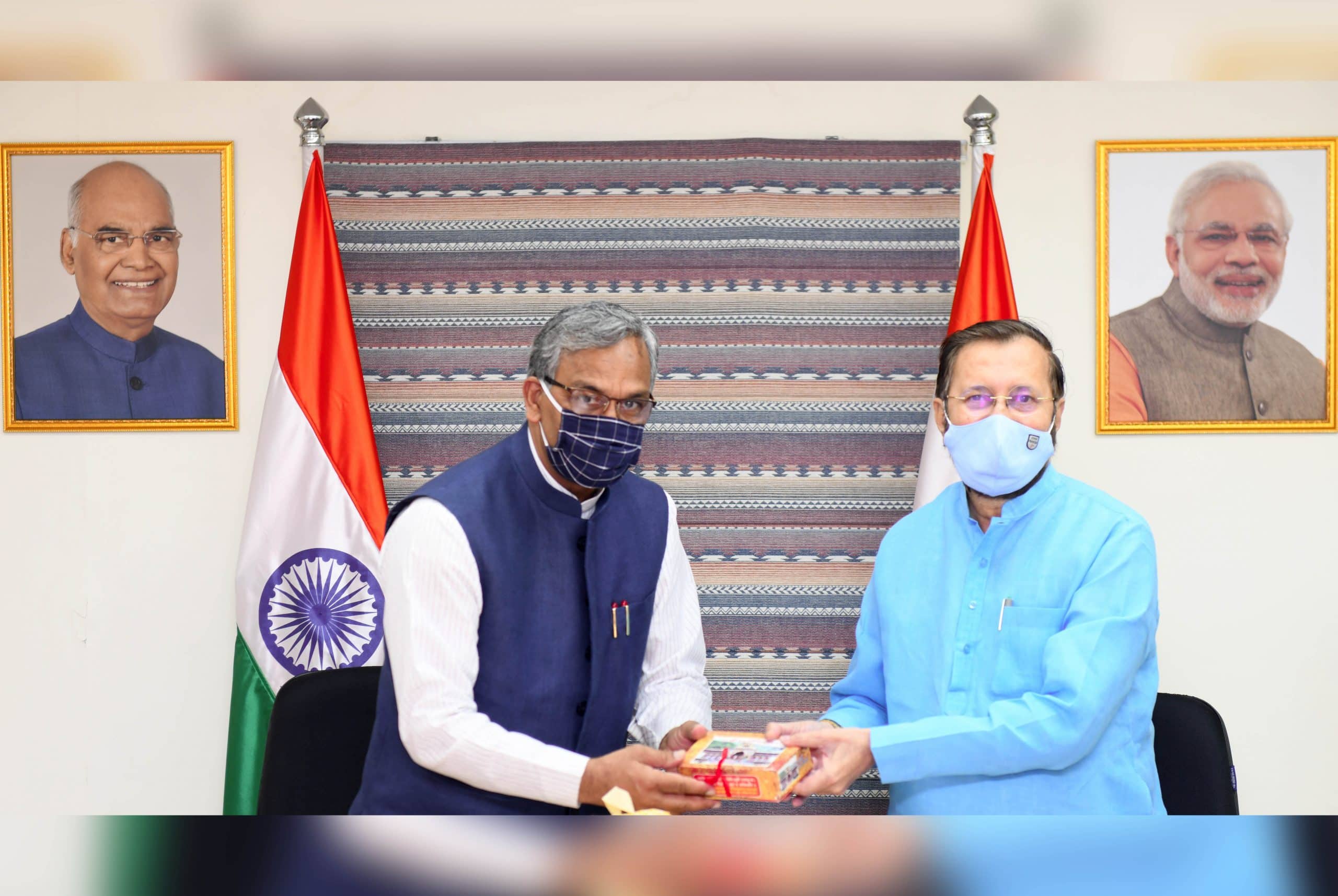 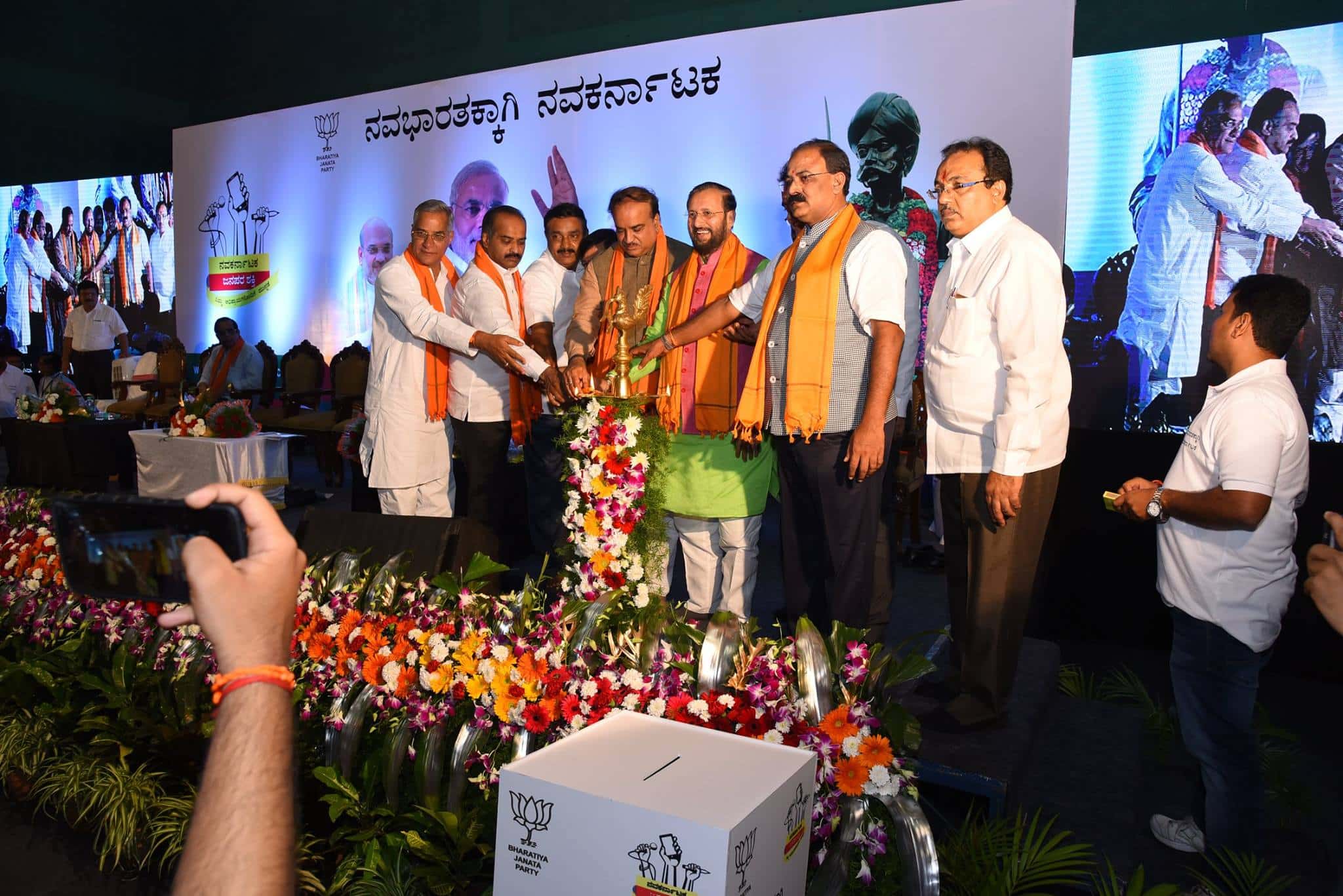 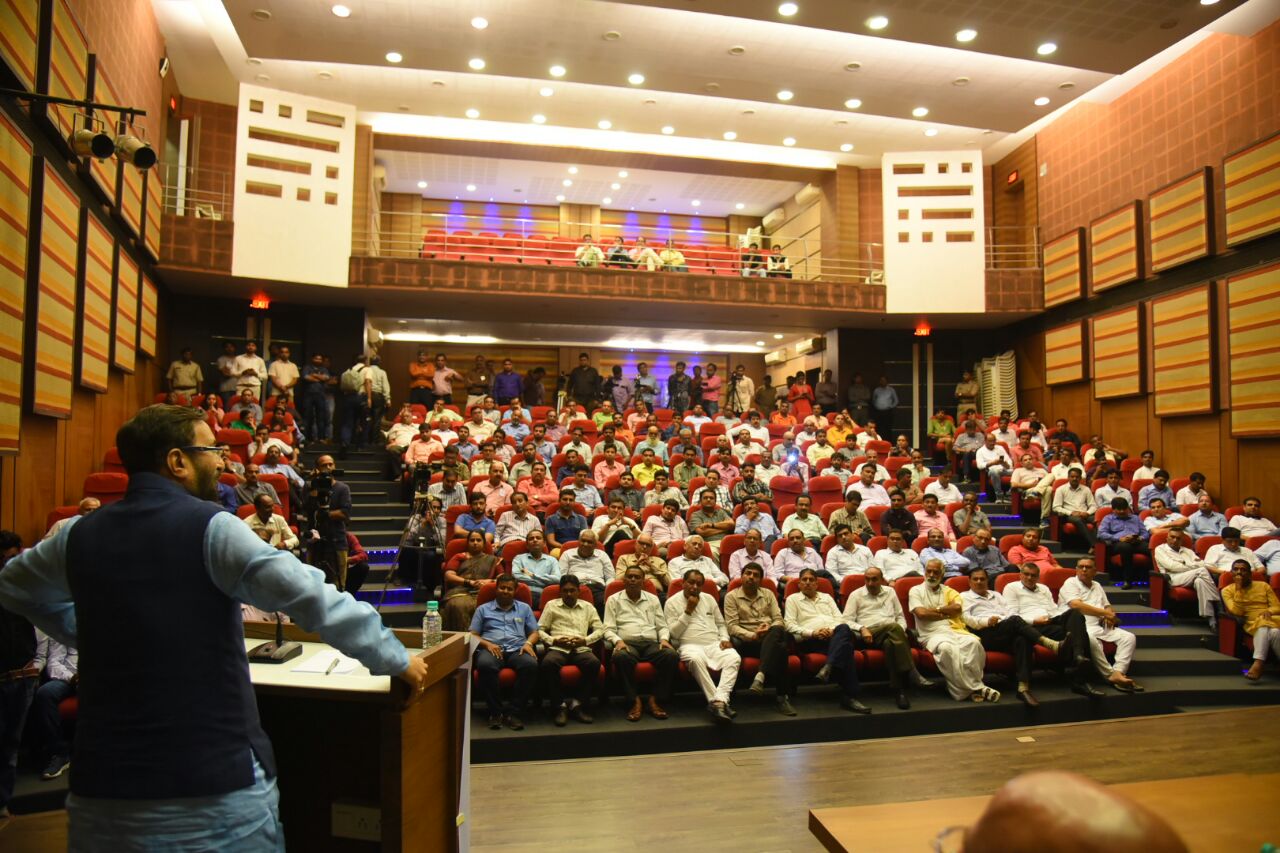 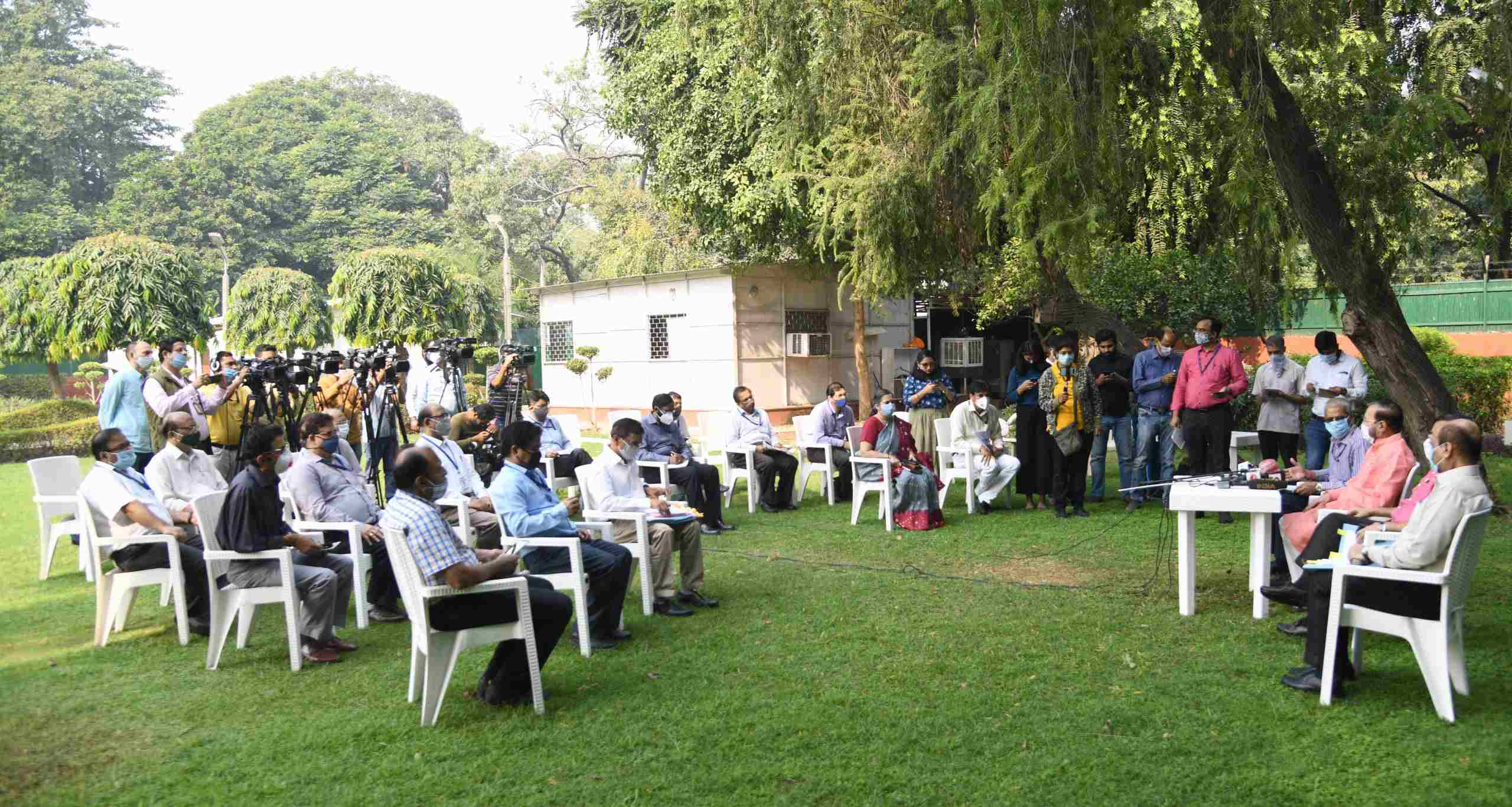 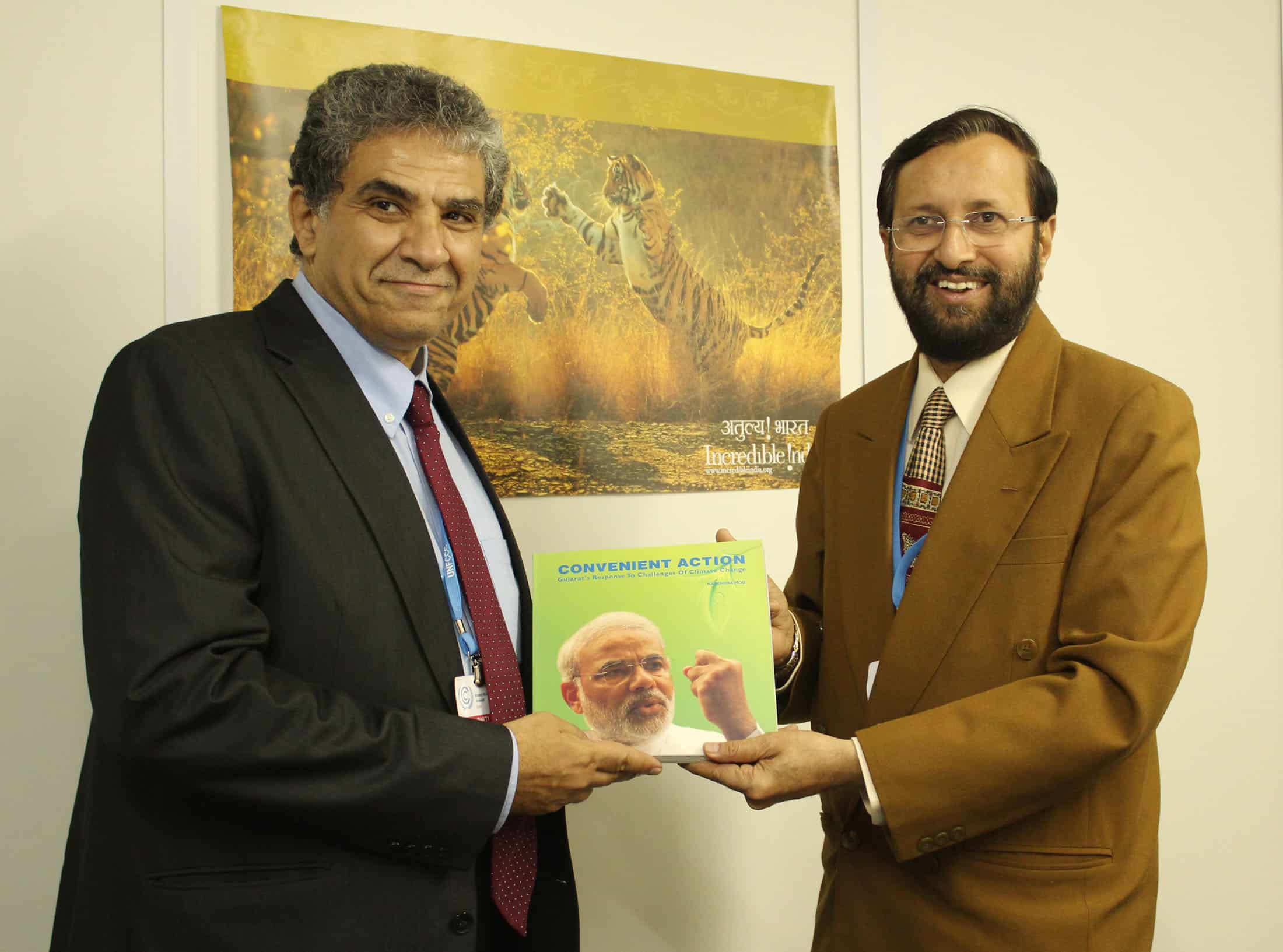 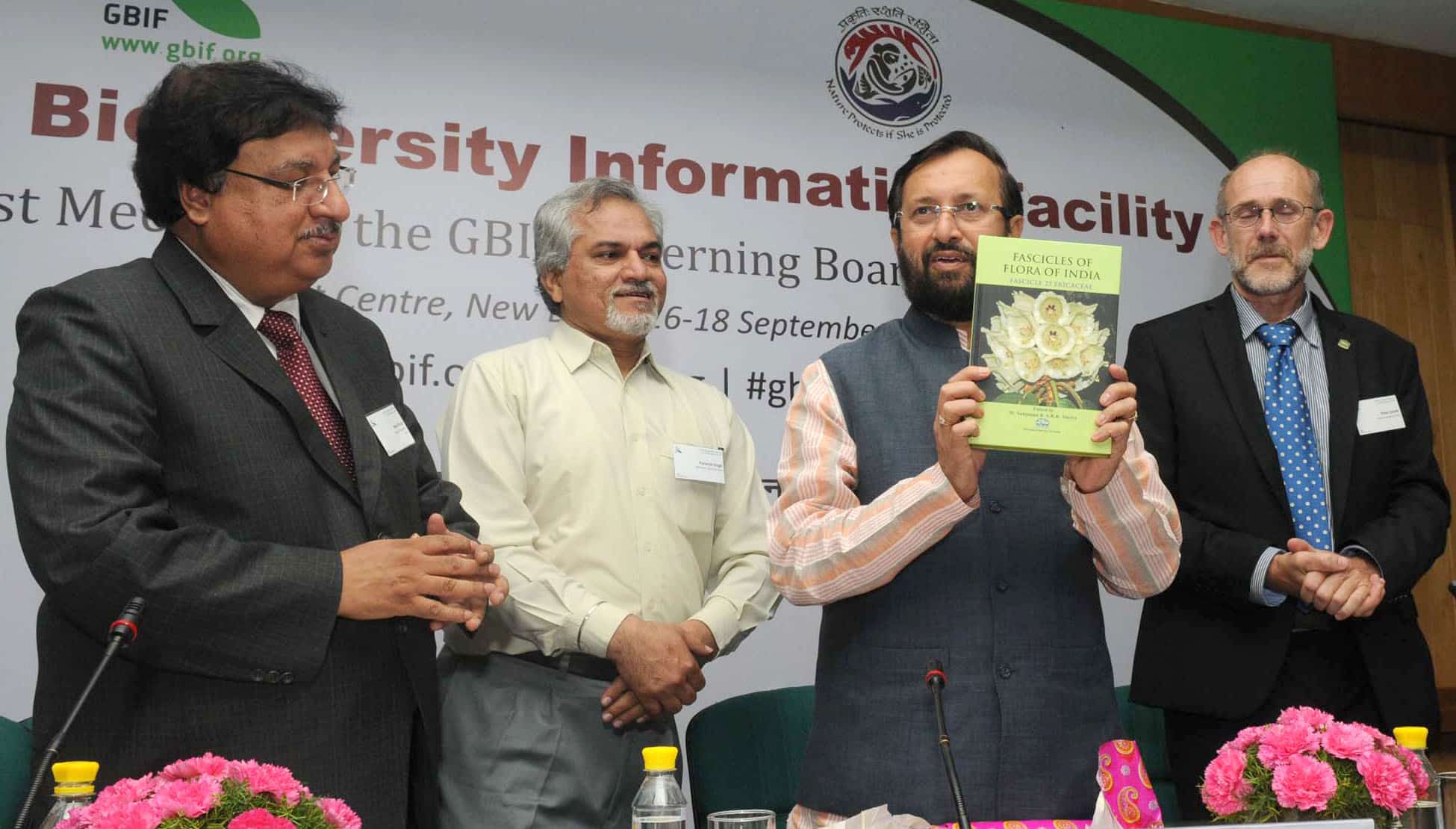 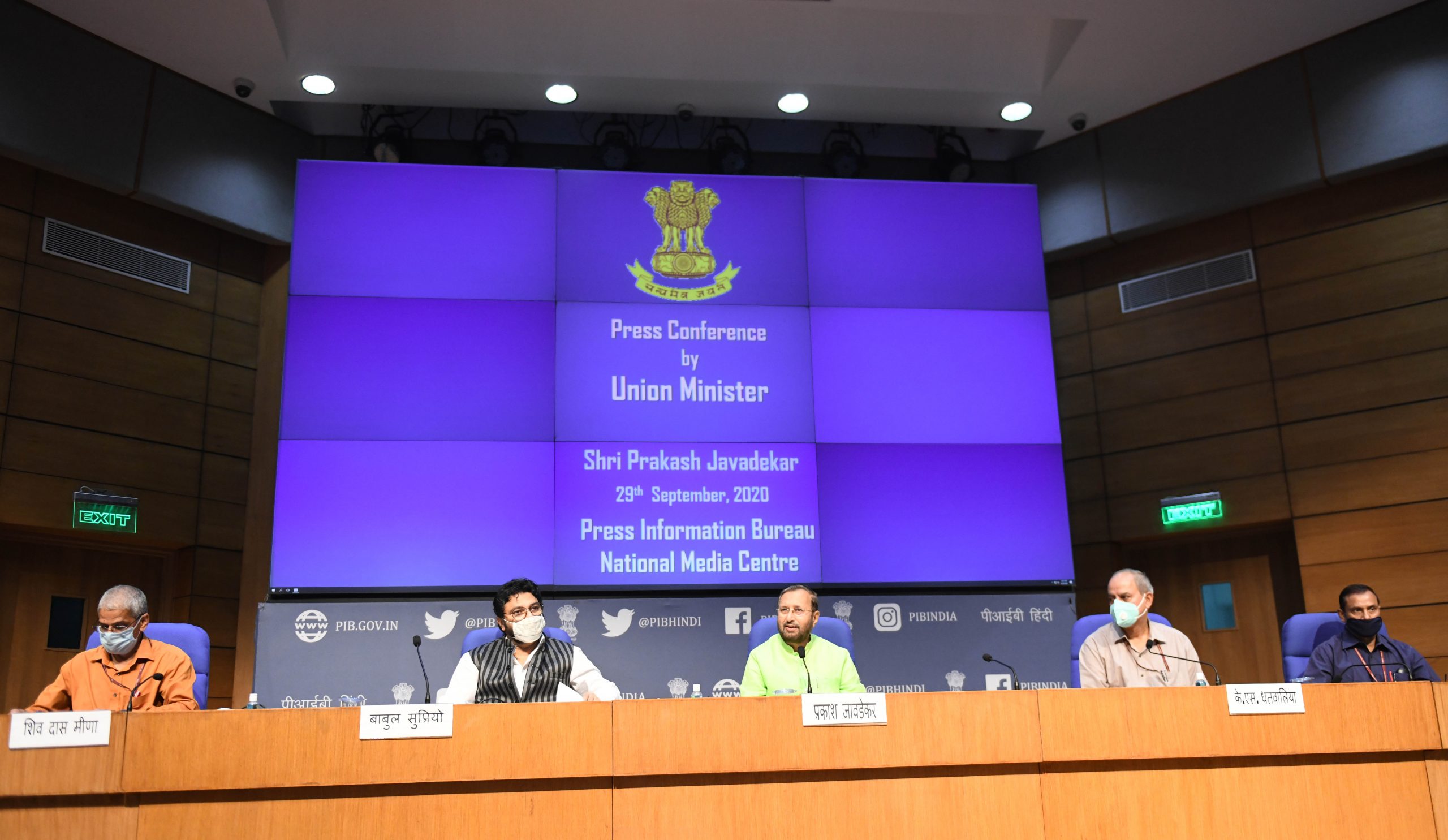 from a Zilla Parishad School and high school from the Government Aided High School in the Tehsil Town of Mahad, District Raigad in Maharashtra.

B.Com from Garware College of Commerce, University of Pune

since his school days, he was influenced by the work of Rashtriya Swayamsewak Sangh and its services for the nation

Member of the RSS

Member of the ABVP

Active in politics since his college days

of the Bharatiya Janata Party.

Member of National Executive of BJYM

of Unemployment Cell of BJYM

of the State Planning Board

TASK FORCE ON IT

of Working Group on “IT for Masses”

(Independent Charge) for Information and Broadcasting

of Heavy Industries and Public Enterprises

of Environment, Forest and Climate Change,

of Information and Broadcasting