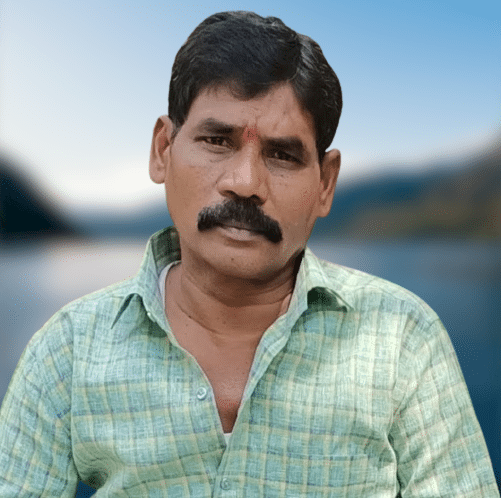 Pogula Koteswar Rao is the District General Secretary of Bhadradri Kothagudem from AITUC.

He was born on 03rd June 1996 to Pogula Yellaiah and Veeramma and raised in Kothagudem Village of Bhadradri Kothagudem District.

In the year 1982, Rao completed his Secondary Board of Education from St.Andrews High School located at Kothagudem. He finished his Undergraduate from Government Junior College placed at Kothagudem in 1984.

Shortly before the end of his studies in 1979, he began his political career by entering politics through the People’s War Party. He worked as a Member of the respective party to maintain the support of the population and draw the enemy deep into the countryside till 1989.

Later on, in 1989, he swapped the political party to the Communist Party of India(CPI)as a Member and started rendering service to the people irrespective of their Caste, Race, Gender, and Religion for the growth and development of Backward Classes along with religious.

Because of the efforts being made for the development of the party, In the year 1996, the party offered him the post of Department Secretary(Shaka Secretary) from CPI and discharged his duties by being very cautious during performing the activities of the Party till 2012.

After receiving the authority and performed every activity as his responsibility for the welfare of the people, Koteswar Rao switched to the All India Trade Union Congress(AITUC) of Building workers Union with the association of CPI Party.

After he joined the party, he was appointed District President of the Building Workers’ Union in Kothagudem in 1990, seeing the work he was desperately doing for the party’s well-being and the immense confidence placed in him by party officials in return.

He won the admiration of the party and the people by using the responsibilities, duties, and powers assigned to him only for the good of the people without compromising on the trust placed in him by the party till 2005.

For his perseverance, dedication, and service, Koteswar Rao was appointed as District General Secretary for Kothagudem from Building Workers Union in 2005 and he has been in the position which was assigned and rendered services to many through his kind heart by fulfilling the tasks assigned to him till now and winning the admiration of the people.

In the year 2011, He was appointed as the State Council Member of Telangana from AITUC to promote the right perspective towards the need for holistic and sustainable development in students by doing his part to alleviate the people.

On the one hand, while fulfilling his political responsibilities, he increased his work ethic in 1999 by joining the ‘Gruha Nirmana Thapi Sangam’ which has been established in Kothagudem and has been serving as a General Secretary of the respective Sangam and to continue his duties and serve people in all the way.

Services rendered during the Covid 19 Pandemic

During Second Wave of Corona: 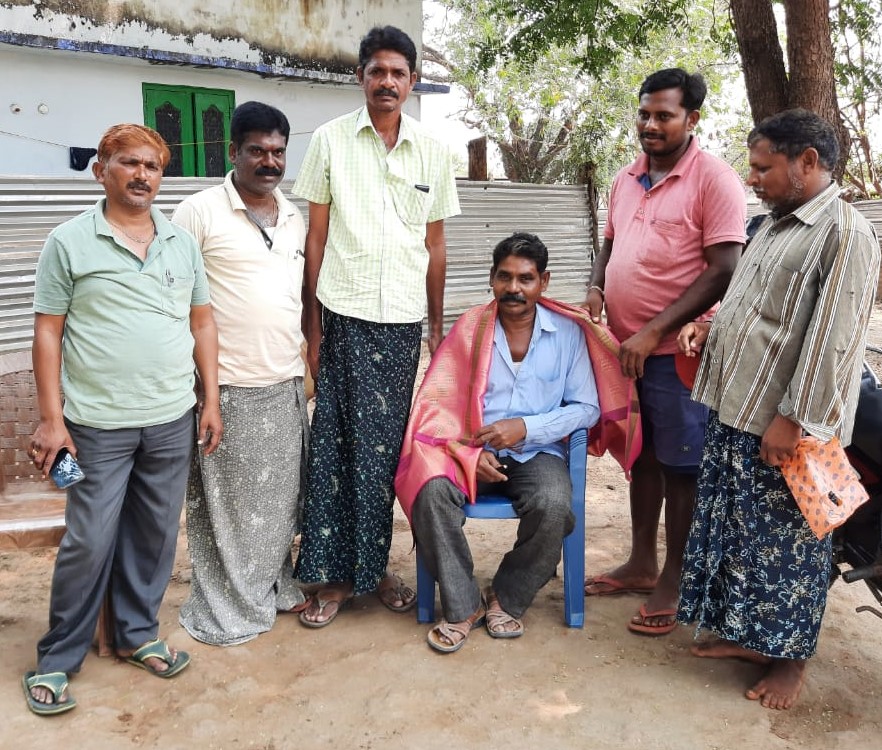 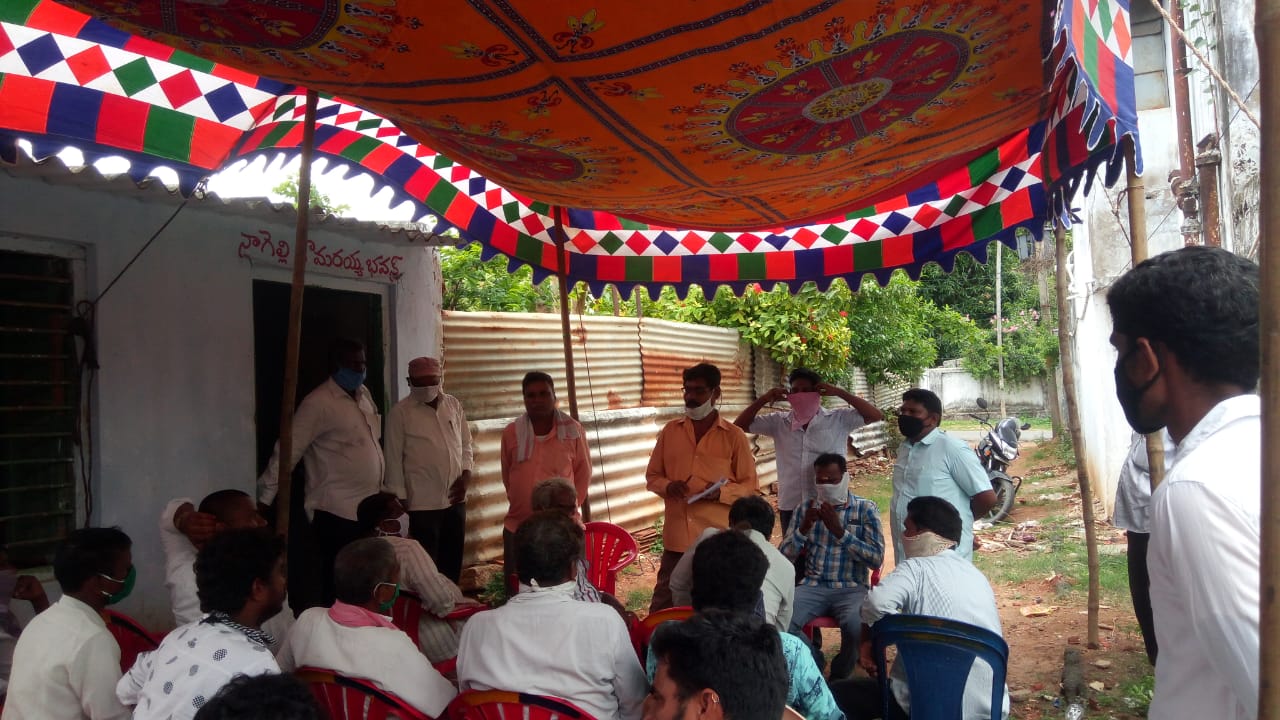 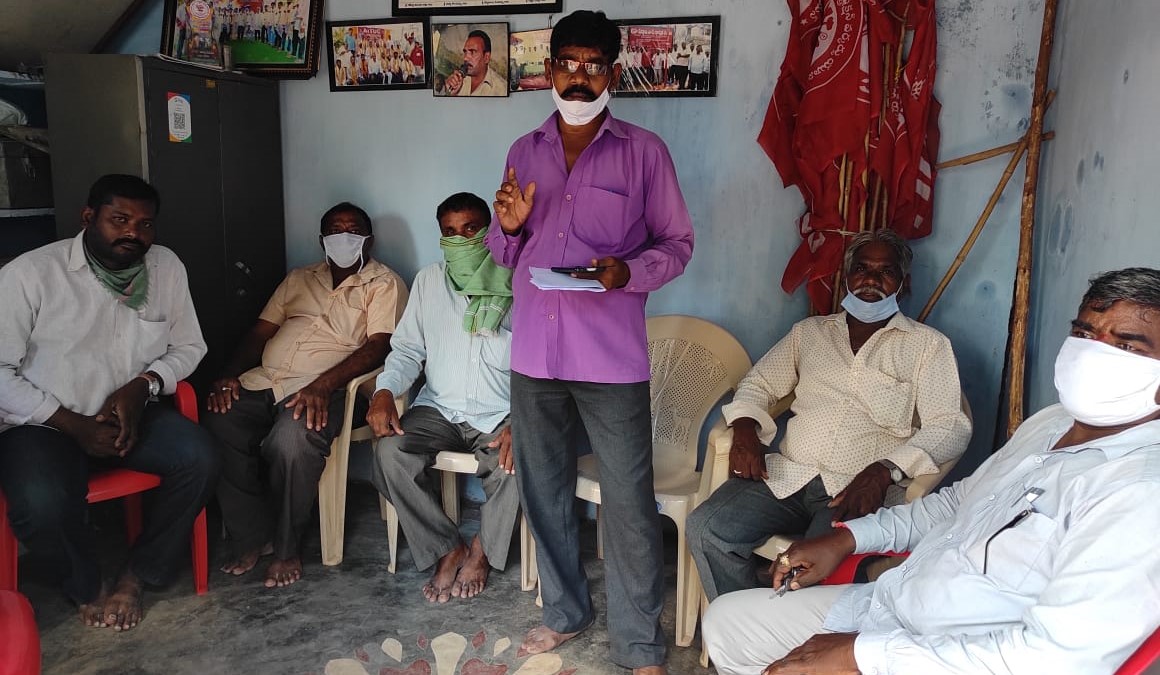 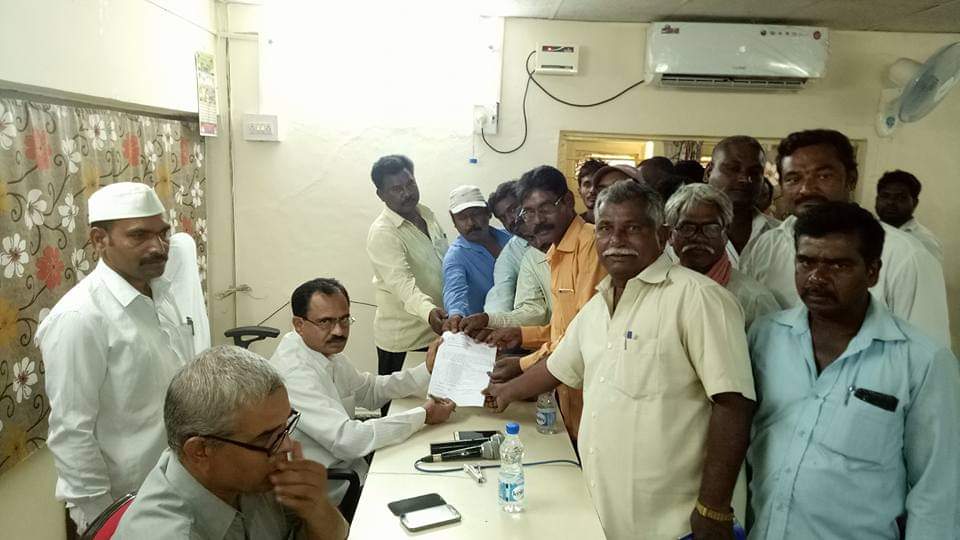 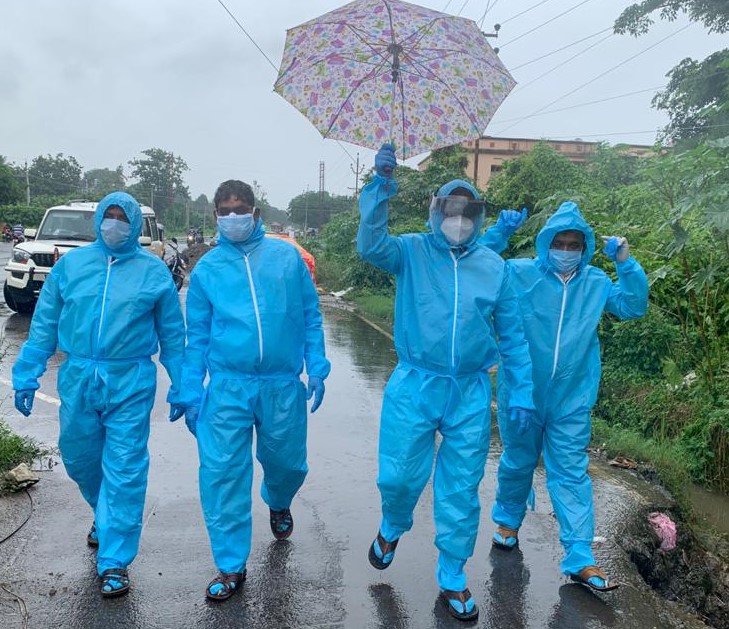 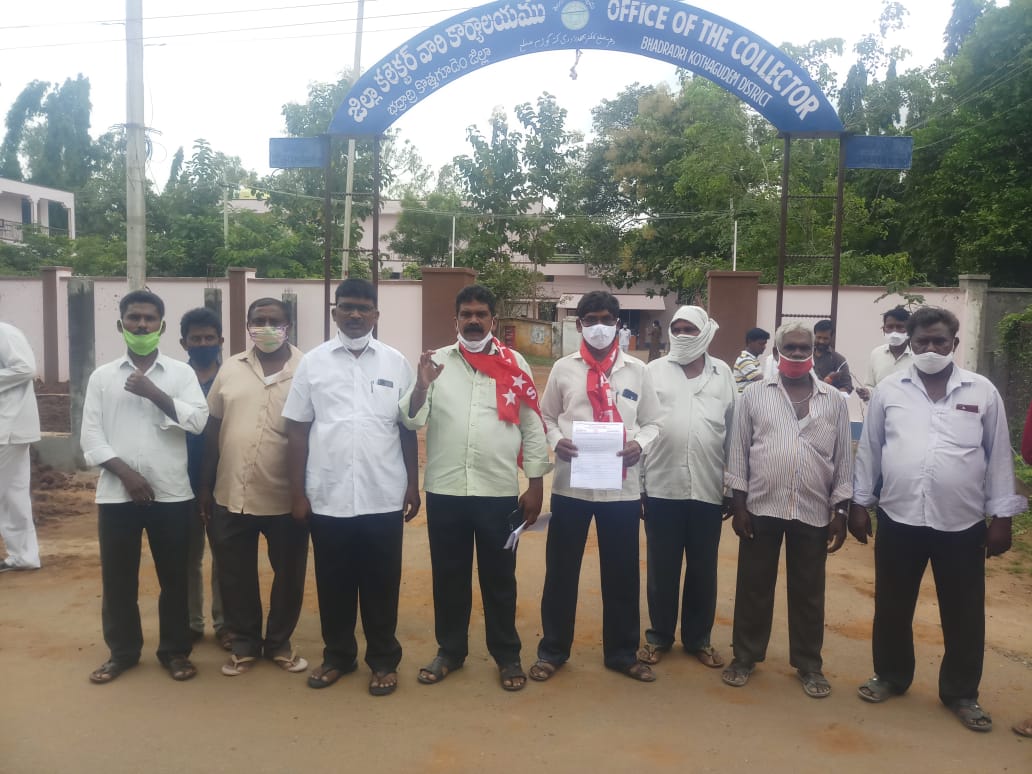 Labour Day (Labor Day in the United States) is an annual holiday to celebrate the achievements of workers. Labour Day has its origins in the 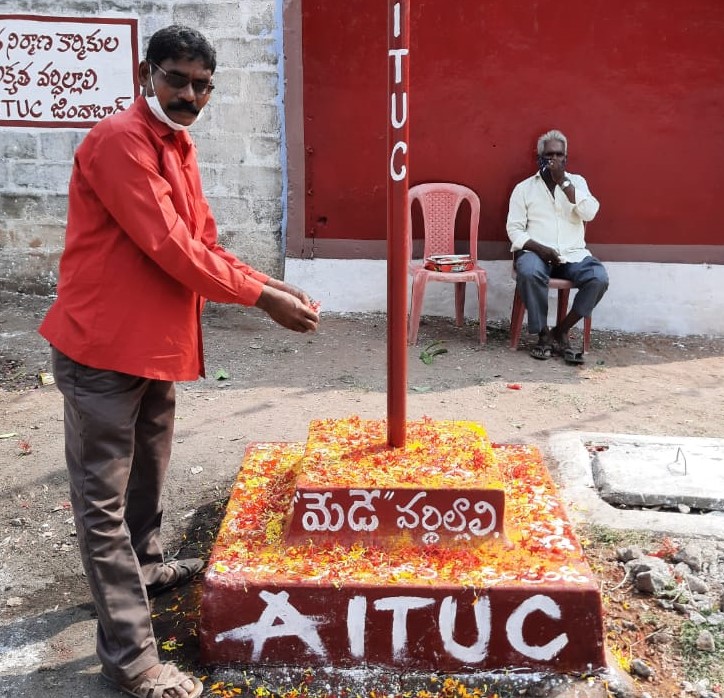 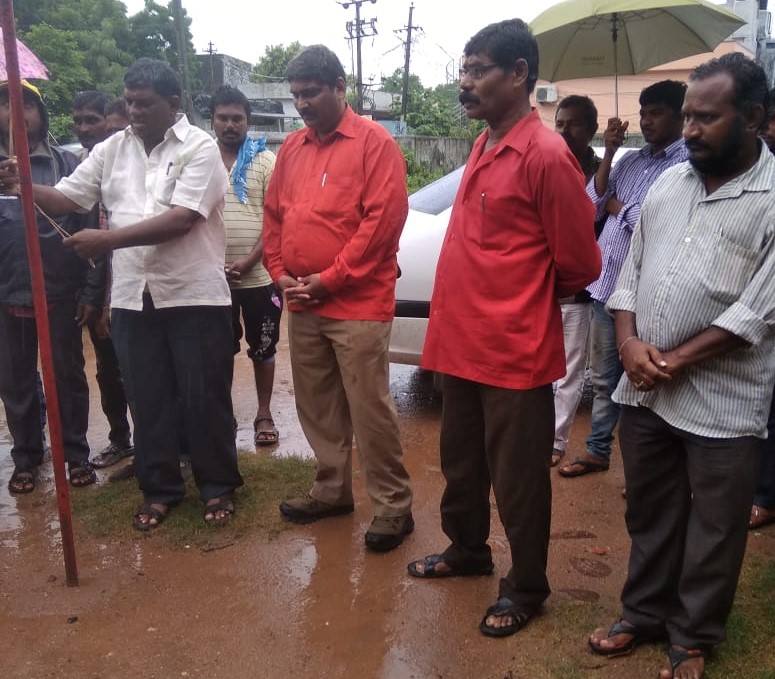 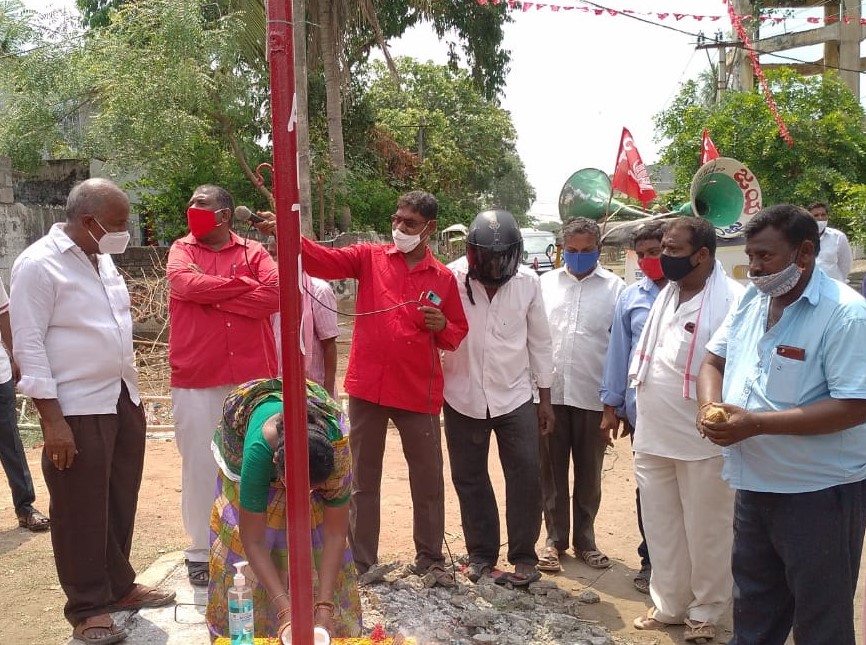 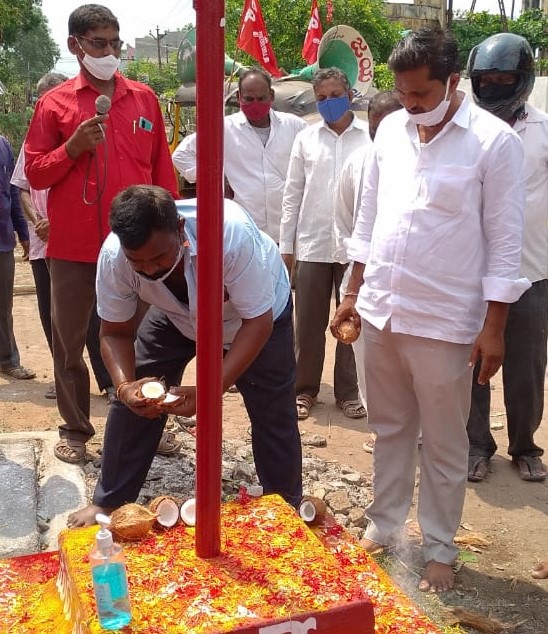 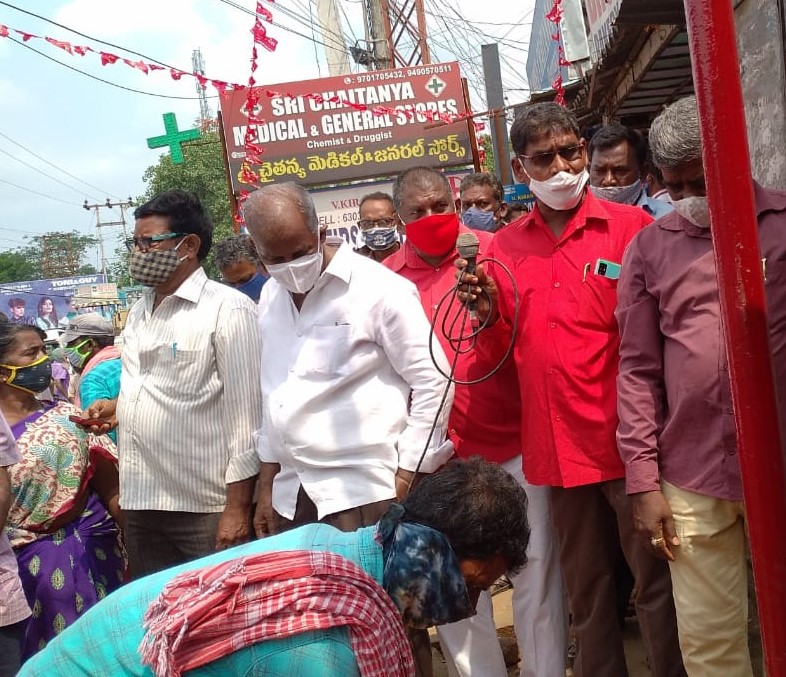 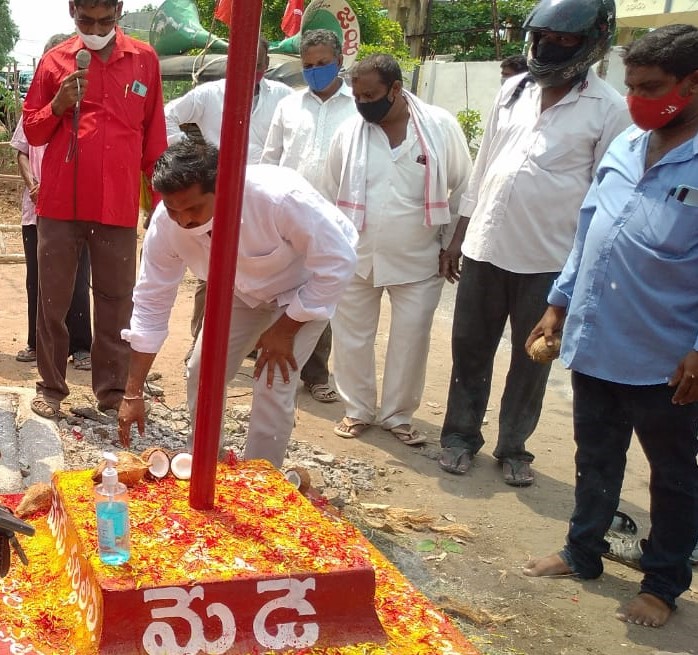 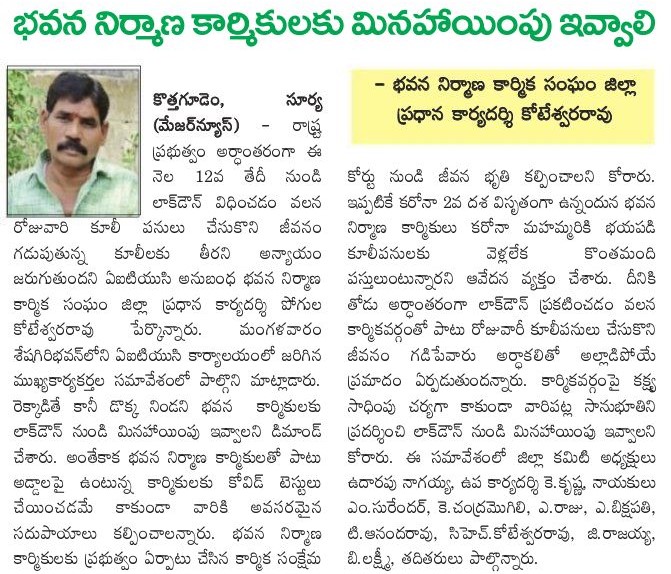 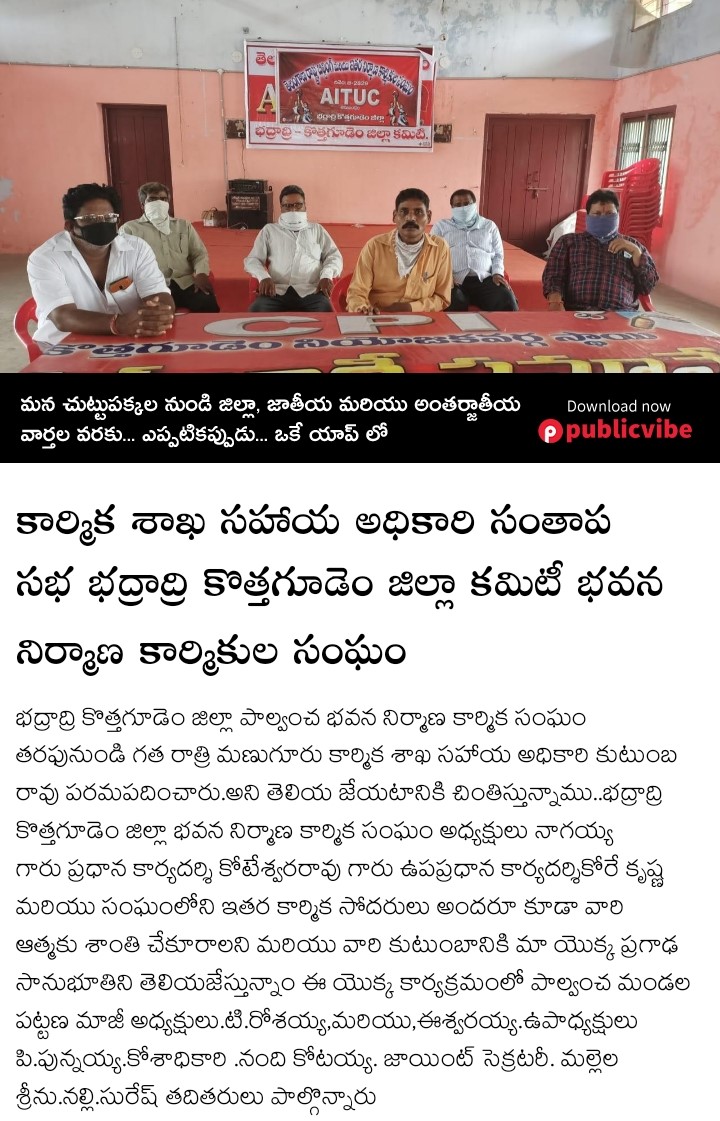 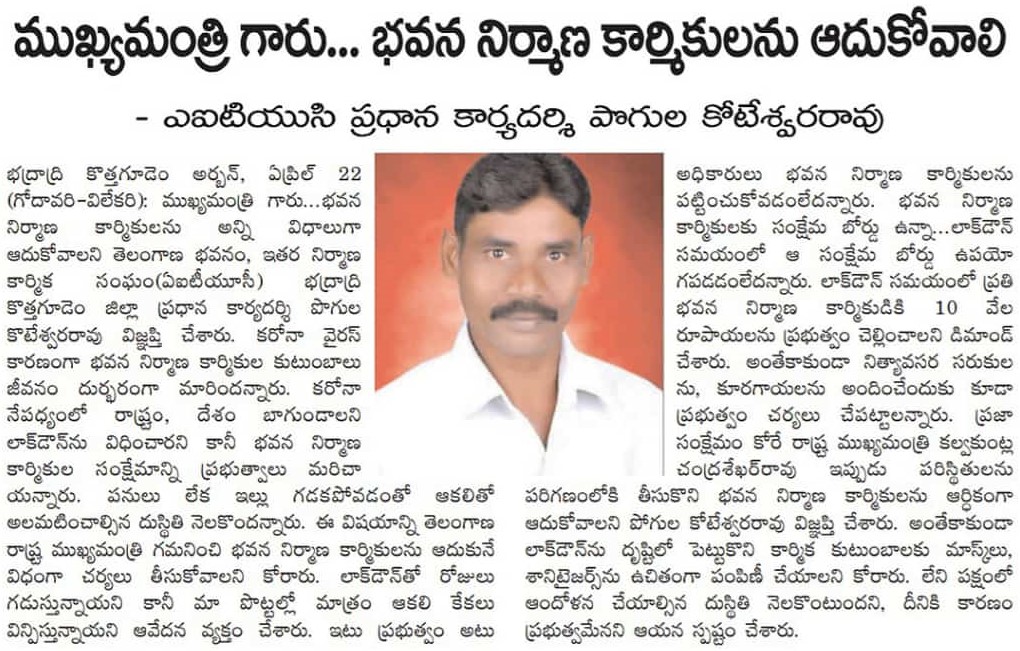 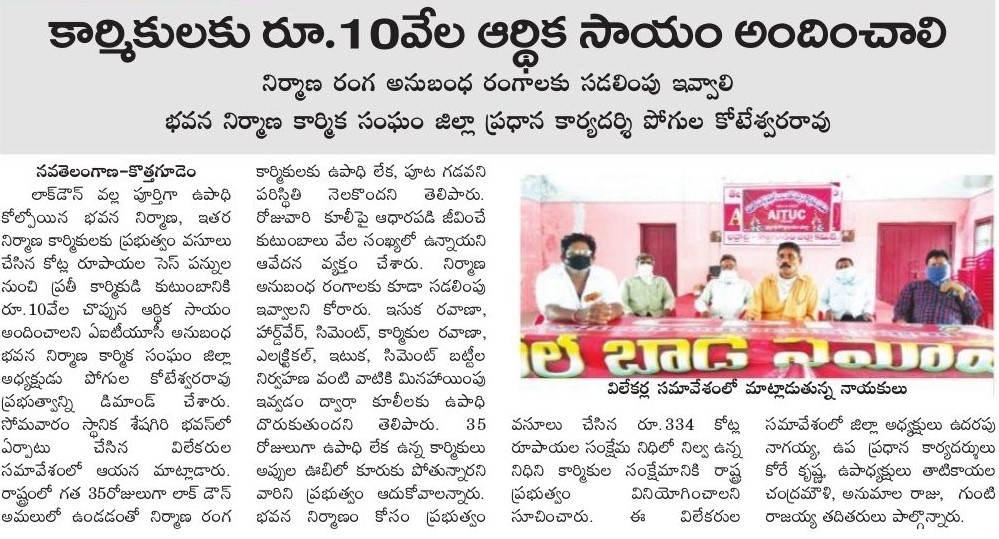 Joined in the People's War Party

Joined in the AITUC