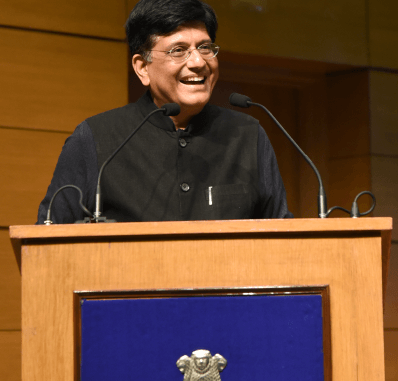 Piyush Vedprakash Goyal is an Indian politician and the current Minister of Consumer Affairs, Food and Public Distribution, Minister of Railways, Minister of Commerce and Industry in the Government of India. He was born on 13th June 1964 in Bombay to Chandrakanta Goyal and Ved Prakash Goyal.

He was elevated to the Cabinet Minister position on 3 September 2017. He is currently a Member of Parliament for Rajya Sabha from the state of Maharashtra and the Deputy Leader of Rajya Sabha.

He was earlier the National Treasurer of the Bharatiya Janata Party (BJP). He headed the BJP’s Information Communication Campaign Committee and oversaw the publicity and advertising campaign of the party including the social media outreach for the Indian General Elections 2014.

Goyal is the 2018 Carnot Prize Recipient for distinguished contributions to energy policy. Piyush Goyal has been allocated the cabinet ministry for Narendra Modi led NDA government in May 2019. He is currently taking charge as Minister of Railways, Minister of Commerce and Industry, and Minister of Consumer Affairs, Food and Public Distribution.

Piyush Goyal is a successful chartered accountant who has served on the board of State Bank of India. In his long tenure as a member of BJP, he served in several key roles and managed election campaigns. He was elected to Rajya Sabha in 2010 and subsequently in 2016 for a second term. He was inducted into Narendra Modi’s Cabinet in 2014 and served in a few ministerial posts. He presently serves as Minister of Finance and Minister of Corporate Affairs.

Goyal’s mother was a three-time Bharatiya Janata Party (BJP) Member of Legislative Assembly (MLA) from Maharashtra and his father served as the Union Minister for shipping in the Third Vajpayee ministry from 2001 to 2003. His father also served as the National Treasurer of the BJP for over two decades.

He is married to Seema Goyal, an active social worker, and has two children – Dhruv and Radhika, who have both graduated from Harvard University, USA.

Goyal started his career as an investment banker and served on the board of India’s largest commercial banks, the State Bank of India 2001-2004 and Bank of Baroda 2002-2004 as Government nominee.

Goyal was a Member of the Standing Committee on Finance and the Consultative Committee for the Ministry of Defence. An active member of the Managing Committee of the Indian Merchants Chamber, he is also involved with NGOs in diverse fields such as tribal education and the welfare of the physically challenged (Jaipur Foot).

During his 35 years long political career, Mr. Goyal has held several important positions at different levels in the world’s largest political party, the Bharatiya Janata Party (BJP), and is in its National Executive. He has been the National Treasurer of the Party. He was also nominated by the Government of India to the Task Force for Interlinking of Rivers. He was the Dy. Campaign In-charge for the Parliament elections in 1991 and played a key role at the central level in all elections since 2004.

He was elected as the Bharatiya Janata Party candidate from Maharashtra for the Member of Parliament, Rajya Sabha in 2010.

Goyal was the Minister of State for Power, Coal, New, and Renewable Energy in the Modi government in 2014 and undertook multiple initiatives in his term. He accelerated the mission to provide 24X7 reliable electricity to all households and pushed towards the adoption of clean energy. He introduced the Ujwal DISCOM Assurance Yojana (UDAY) to revive debt-ridden power distribution companies and Deen Dayal Upadhyaya Gram Jyoti Yojana (DDUGJY) to improve India’s energy access.

He successfully auctioned the coal blocks after the much talked about Coal scam of the previous government. He initiated and completed the government program to electrify all the 18,000 remaining unelectrified villages of the country. He was awarded the 2018 Carnot Prize for distinguished contributions to energy policy and work in village electrification by the University of Pennsylvania’s Kleinman Center for Energy Policy. He also worked for energy efficiency in the country through the Unnat Jyoti by Affordable Lighting for All (UJALA) scheme and reduced the prices of LED bulbs to ₹38 (53¢ US) per piece from ₹310 (US$4.30) in 2014. He revised the Government’s target of 20 GW of solar power by 2022 to five times.

On 5 July 2016, during the second cabinet reshuffle of the Modi ministry, he was included in the cabinet and took over as the Minister of State for Mines (Independent charge) from Narendra Singh Tomar.

He became the Minister of Railways on 3 September 2017 taking charge of Suresh Prabhu. On 27 February 2019, Piyush Goyal announced a Railway Zone for Andhra Pradesh named South Coast Railway with Waltair Division in Andhra Pradesh along with Guntur, Guntakal, and Vijayawada Divisions with the headquarters of the zone being in Visakhapatnam, according to the AP Reorganisation Act 2014.

From May through August 2018, he was temporarily given additional charge of the Ministry of Finance during Arun Jaitley’s absence for medical treatment. Goyal presented the 2019 Interim-Union budget of India in the Lok Sabha on 1 February 2019.

In June 2019, he was appointed as the Deputy Leader of the House in Rajya Sabha.

After the demise of Shri Ram Vilas Paswan, he took over the additional charge of the Ministry of Consumer Affairs Food & Public Distribution on 9 October 2020.

A progeny of politicians, Piyush Goyal’s mother Late Smt Chandrakanta Goel was a three-time MLA from Maharashtra and his father Late Shri Ved Prakash Goyal served as a Union Minister for shipping in the Atal Bihari Vajpayee cabinet.

B.Com from H.R.College Of commerce & Economics University Of Mumbai

The Govt Law College University Of Mumbai, CA from  I.C.A.I.

board of India’s largest commercial banks, the State Bank of India.

from Bank of Baroda

Member of the Standing Committee on Finance and the Consultative Committee.

for the Parliament elections

Minister of Commerce and Industry