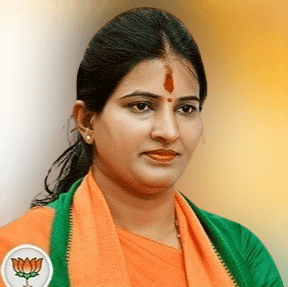 Shilpa Reddy was born and resided at Uppal in Medchal-Malkajgiri District in the Indian State of Telangana.

She has had a strong interest in medicine since she was a youngster, and she hopes to make a positive impact in someone’s life by offering love and treatment. Despite the fact that being a doctor is the toughest and most demanding career, it is critical to achieving one’s own goals.

In the year 2002, Shilpa Reddy has chosen a Medicine course and finished her M.B.B.S ( Bachelor of Medicine and Bachelor of Surgery ) and turned into a professional as a Doctor.

She extended her service and work by setting up a Shreeda Children’s Hospital at Uppal that offers services exclusively to infants, children, adolescents, and young adults.

Having had a great conviction of service from childhood, Shilpa Reddy desires to provide all of the services to the people in attainment. Having been inspired by the Bandi Sanjay Kumar, the President of the Bharatiya Janata Party(BJP), Shilpa Reddy officially turned into a politician on the 21st of November, 2020, and eventually rose to become its Leader.

She takes a decent interest in the Party and engages proactively in every activity, performing out of her responsibilities in compliance with a code of conduct and for the benefit of the party’s publicity.

During the time period of Elections, Shilpa Reddy contested for the prestigious position of 10th Division Corporator of GHMC but with the minor difference in the voting percentage, the position has been vacated.

She ramped up her service and effort by accepting the prestigious position of Mahila Morcha Medchal Malkajgiri Urban District President from BJP in 2021 to provide care about the people and the difficulties they face, and she worked in that capacity.

Shilpa Reddy has served the people honestly from the party’s formation to the current day, persistently aiming for the party’s and society’s progress and rendering desperate service to society and the common good.

Her ambition to join politics at a young age and serve the public in a humble way has been implanted in her consciousness from childhood.

As a Social Worker, she has the mission of accumulating awareness among the poor through creative livelihood activities, working for a corrupt-free society, and assuring order and accountability in all efforts aimed at uplifting the poorer sectors of society… 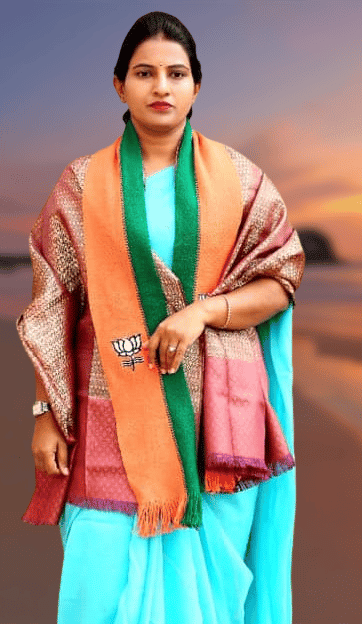 Mrs. Shilpa Reddy’s Belief: “There is no Secret to Success, It is the result of Preparation, Hard Work, and learning from failure.” 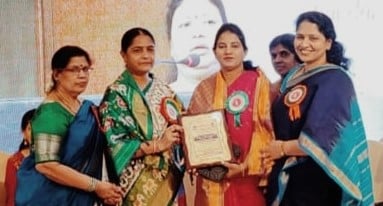 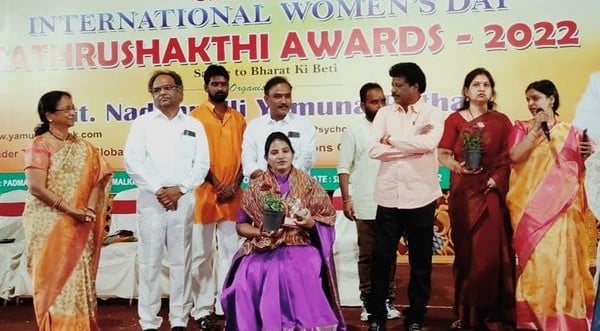 Ms. Mekala Shilpa Reddy was honored with the MATRUSHAKTHI AWARD on the night of International Women’s Day, which was organized by Smt. Yamuna Pathak and the Lions Club of Matrushakthi Yapral.

Ms. Mekala Shilpa Reddy was presented with the COVID WARRIOR award for her services to the people during the pandemic by the Honorable Governor of Haryana, Bandaru Dattatreya, during the Alai Balai event at Jalavihar.

Approximately 200 women from Medchal Malkajgiri joined the Bharatiya Janata Party and were admitted into the party.

BJP president Bandi Sanjay was the chief guest at the function, which was attended by party leaders and goat sculptor Reddy on the occasion of the birth anniversary of Chhatrapati Shivaji, the founder of the Maratha state, who established himself as a king in history with his administrative prowess by upholding Swarajya values and Maratha heritage. 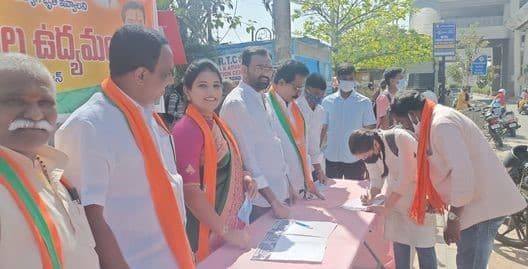 Mekala Shilpa Reddy organized a crore signature drive to create job opportunities for the unemployed, to issue notifications for 2,00,000 vacancies in the state.

A  Aksharabyasam program and an Annaprasana program were performed at the temple on the auspicious day of Vasantha Panchami for children in the Uppal Mandal to gain the Goddess’s graces. 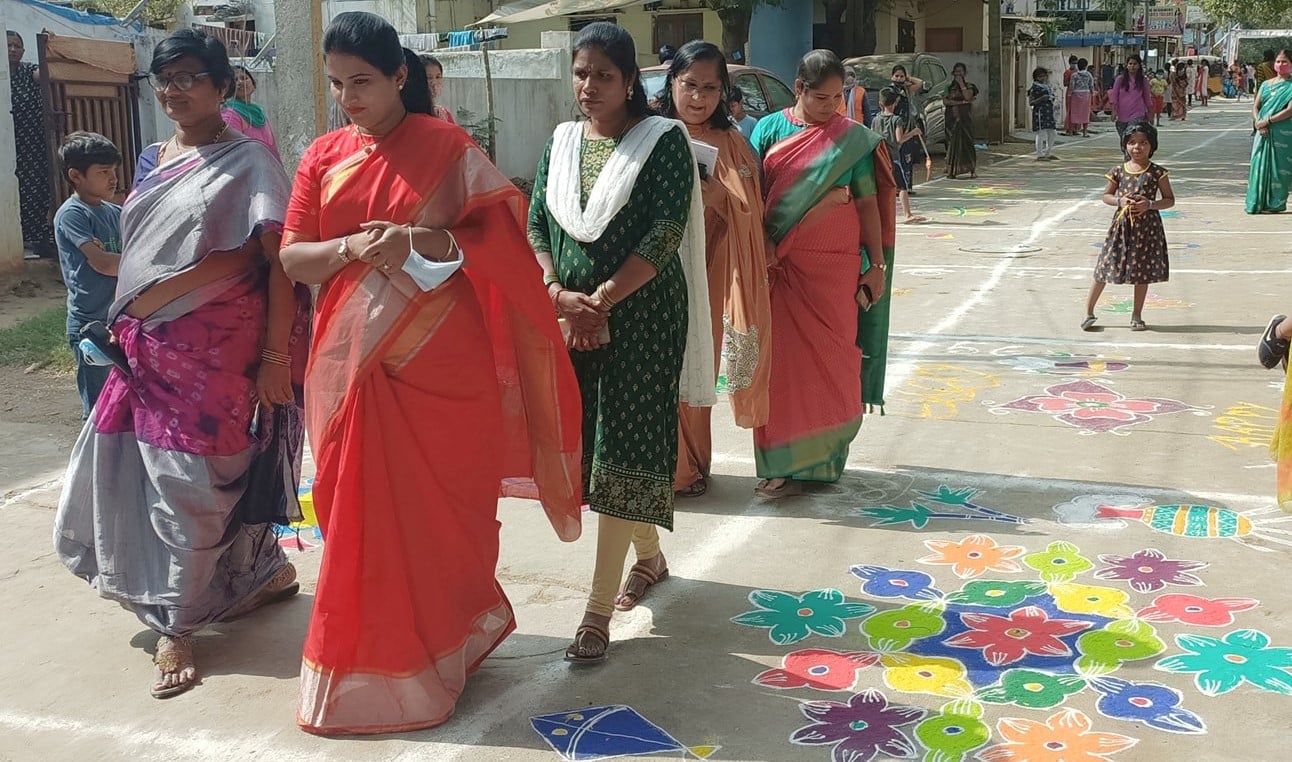 Mekala Shilpa Reddy was the special guest at the Rangoli competition hosted by Mahila Morcha at Kookatpally KPHB Colony as part of the Sankranti festivities.

Mekala Shilpa Reddy participated in the Swachh Bharat Program, which focuses on improving cleanliness and hygiene in urban and rural areas, as well as in workplaces and homes, under the slogan “One step towards cleanliness.

Silent protest in Secunderabad against the illegal imprisonment of BJP Telangana state president Shri Bandi Sanjay and the presence of BJP National President J.P. Nadda  as the protest’s keynote speaker.

PROTEST ON RELEASE OF JOB NOTIFICATIONS

Immediate job advertisements for the replacement of 2 lakh vacant positions jobs in the state, immediate payment of unemployment benefits to the unemployed, immediate payment of a ten-month honorarium to private teachers and lecturers who have been suffering for ten months due to corona or severe hardships

Blossom tributes were paid by the Medchal urban district and new Mahila Morcha joinings on the occasion of our former Prime Minister Shri Atal Bihari Vajpayee’s birth anniversary, which was marked by the presence of our National OBC Morcha President  Dr. K. Laxman, who was led by our District President Shri Pannala Harish Reddy, on the hands of our former Prime Minister. 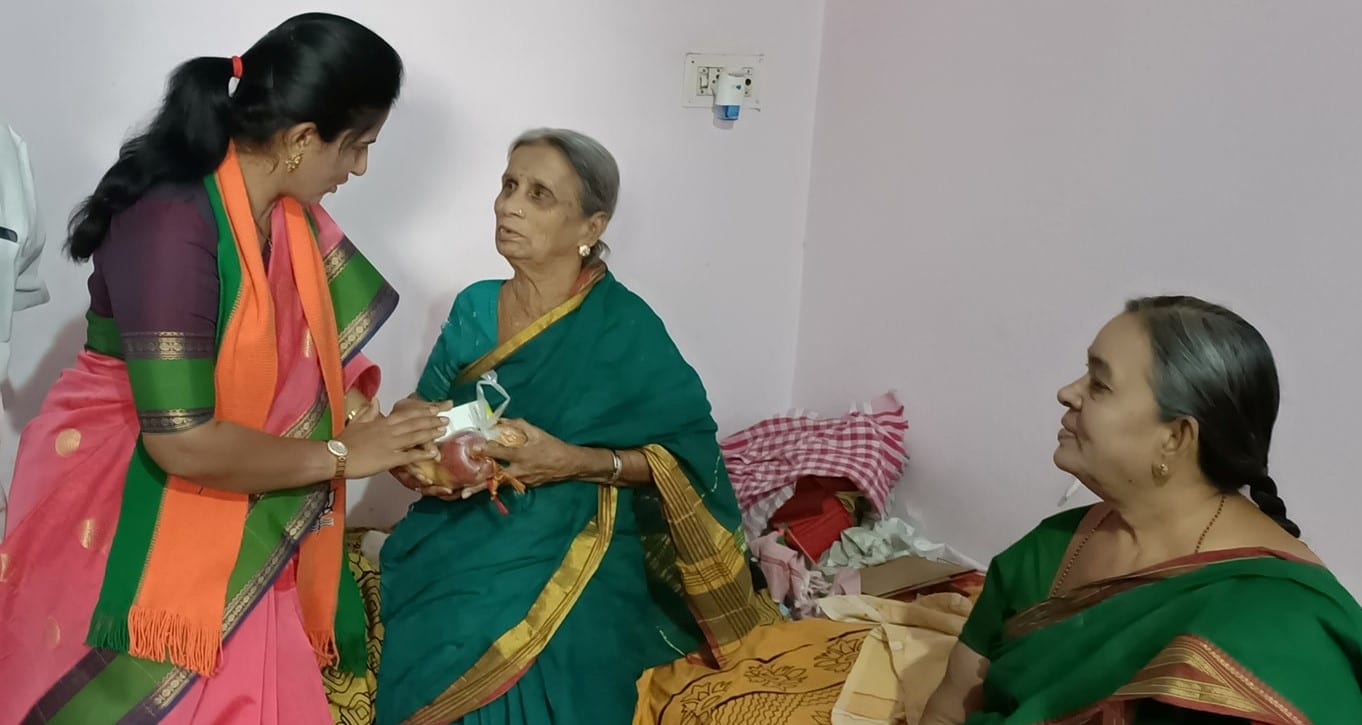 DISTRIBUTION OF FRUITS AND MEDICINE

Mekala Shilpa Reddy visited the Vrudda Abhaya Trust Old Age Home in Uppal on the occasion of the birth anniversary of our former Prime Minister Shri Atal Bihari Vajpayee and handed fruits and medications to the seniors.

A blood donation camp was conducted in the Uppal constituency in Chilkanagar as part of the Seva aur Samarpan Abhiyan. The event was attended by guests Shri Nvss Prabhakar and Pannala Harish Reddy.

Dr. Shilpa Reddy, State Vice President of Uppal and former MLA Shri Nvss Prabhakar, and Medchal urban district president Shri Pannala Harish Reddy were among those who attended the health camp organized by the Medchal urban district Mahila Morcha. A total of 550 school students were examined and given necessary medications as part of the Seva aur samarpan Abhiyan. 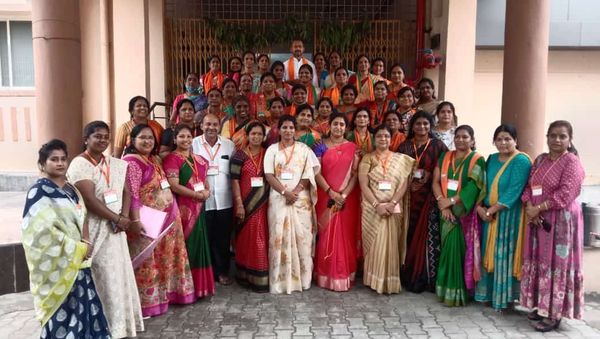 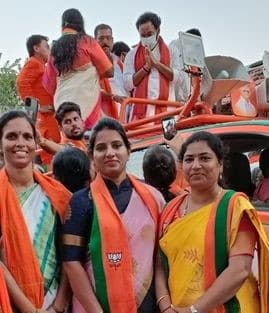 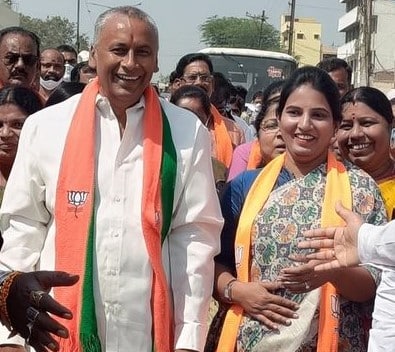 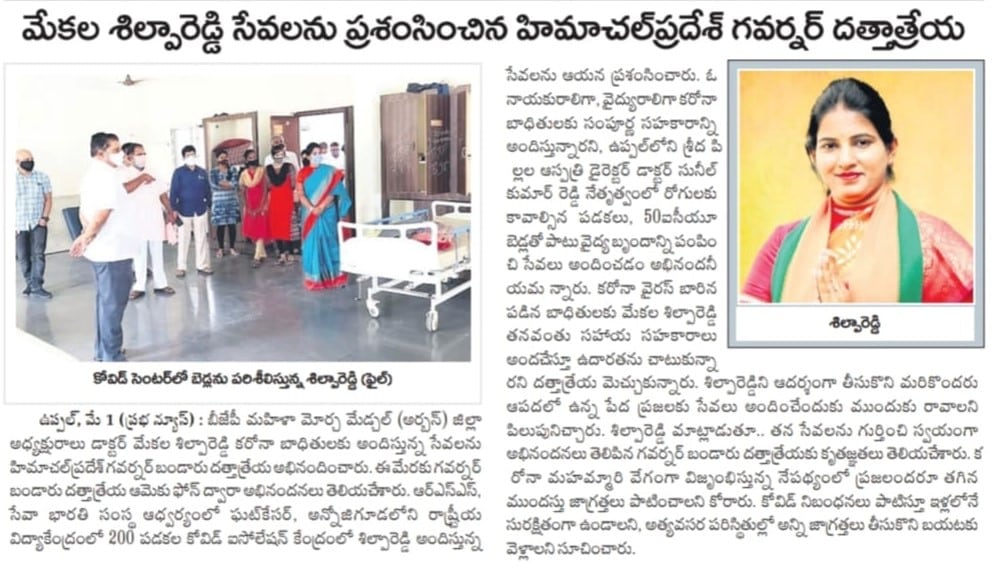 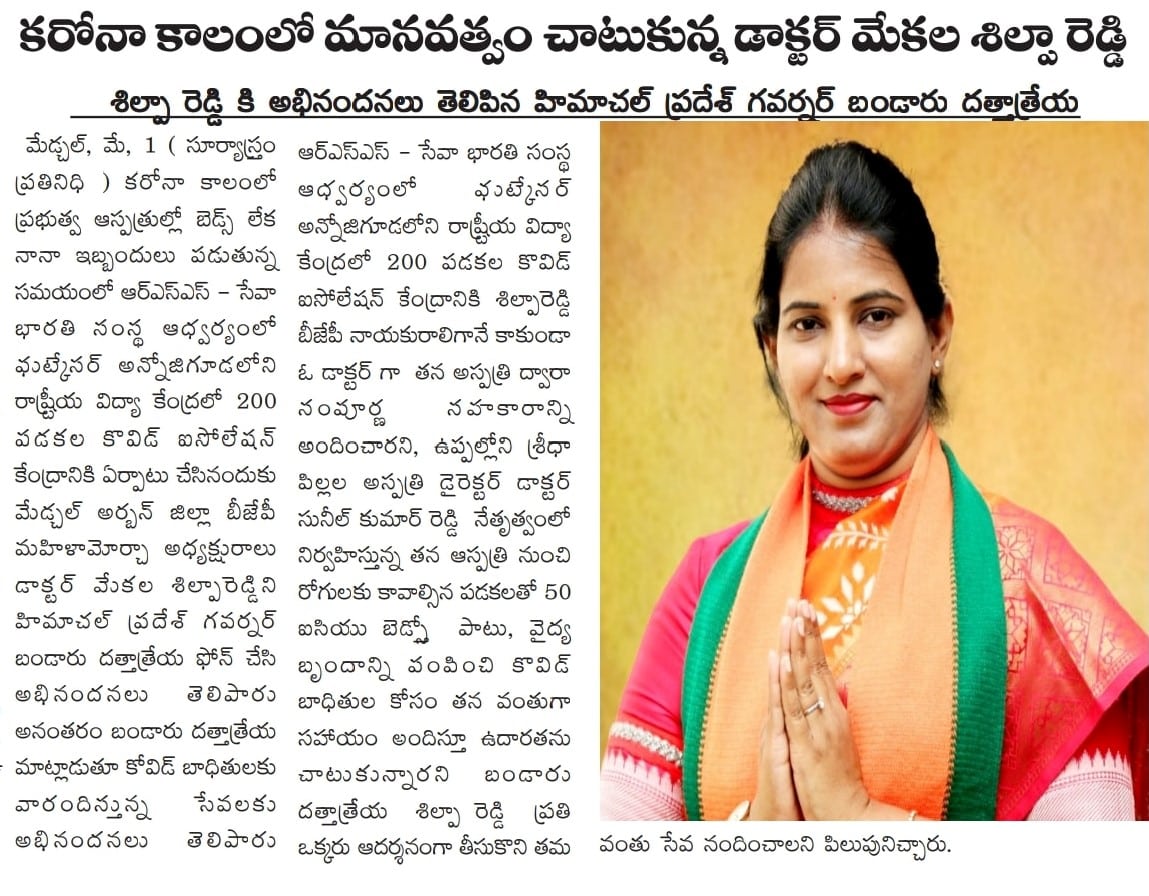 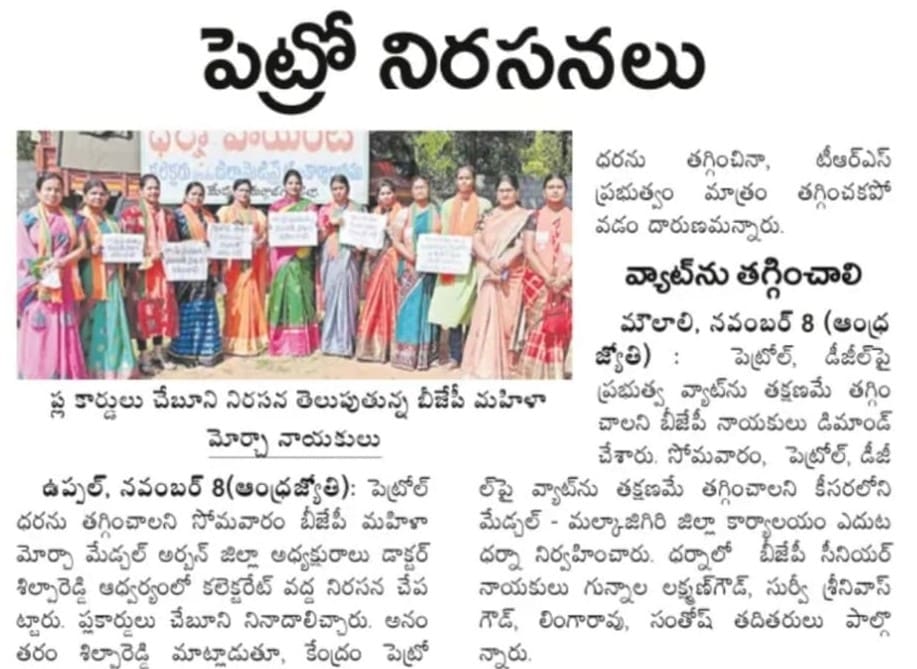 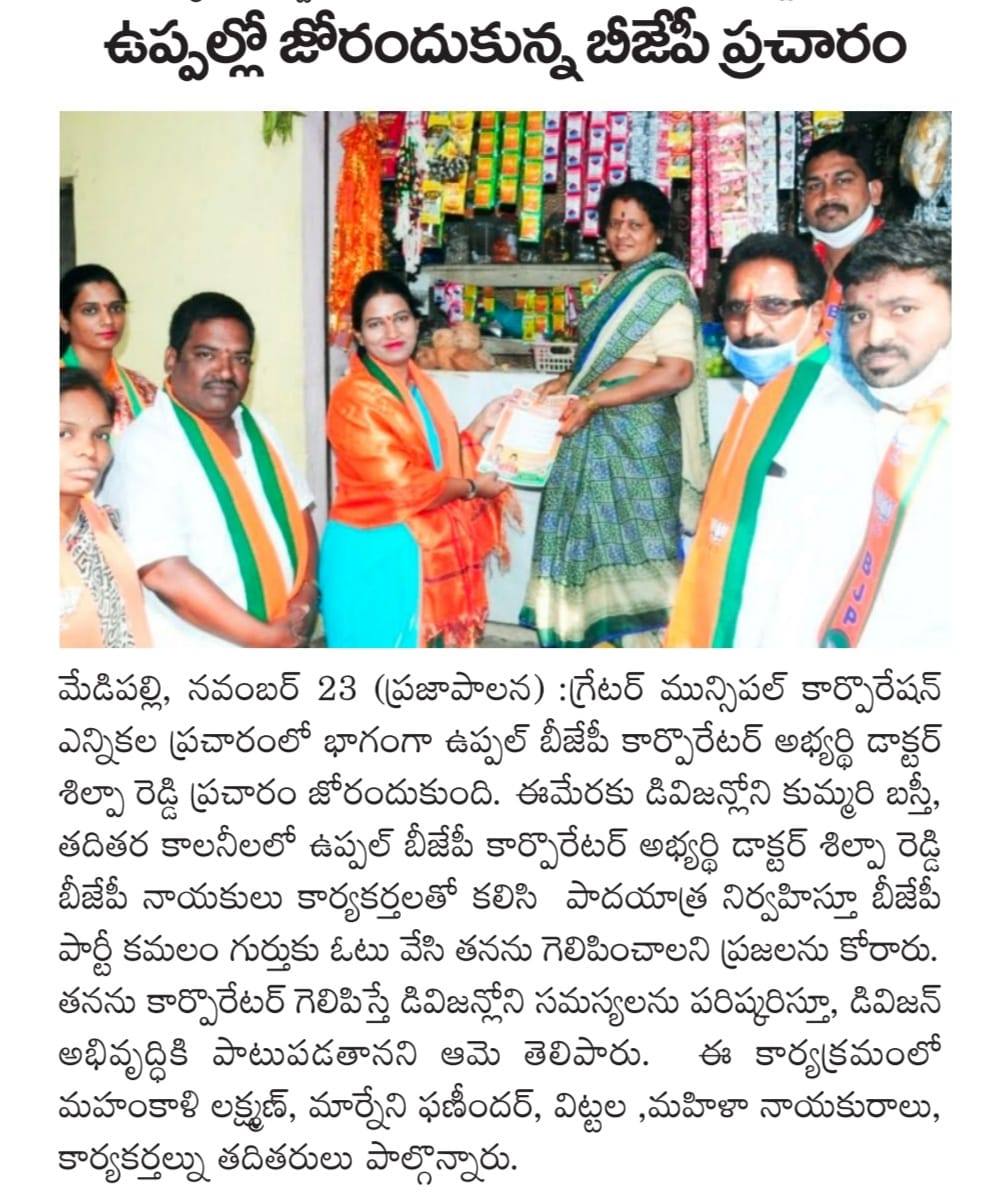 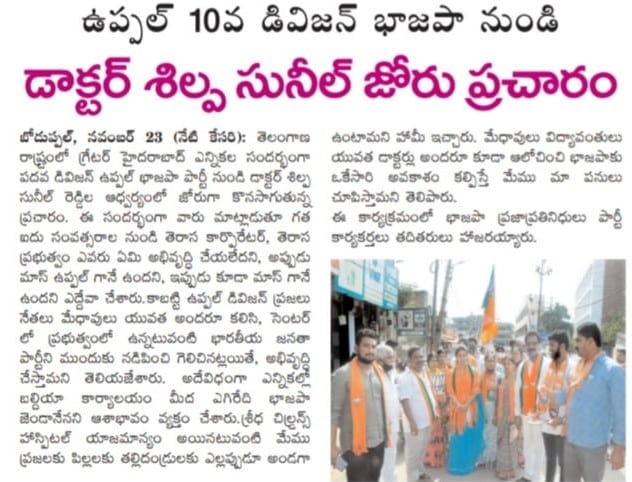 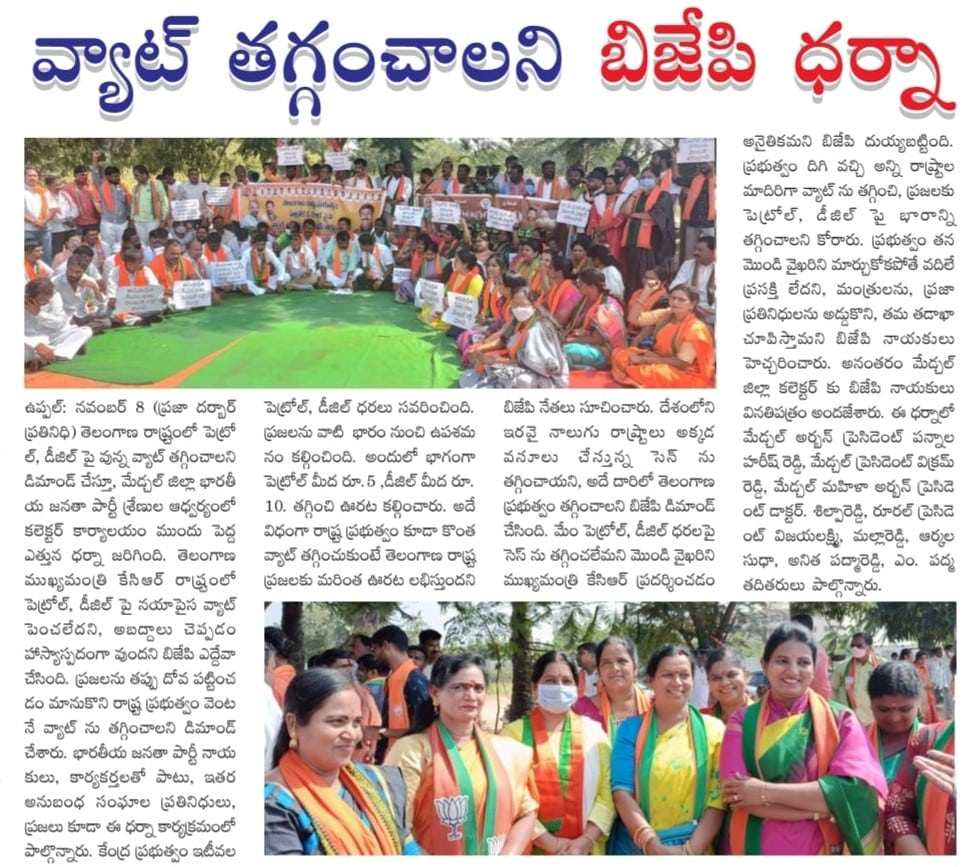 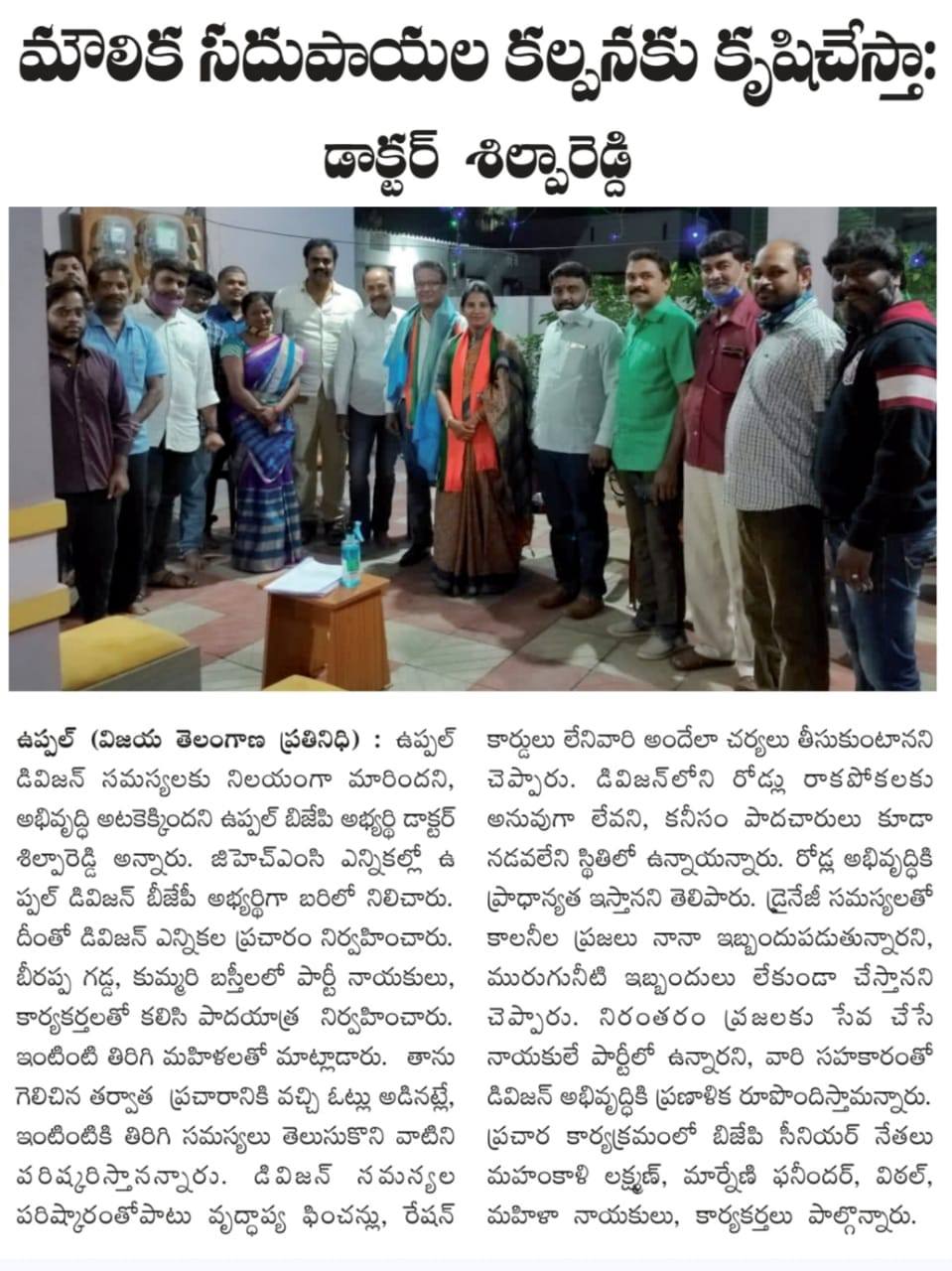 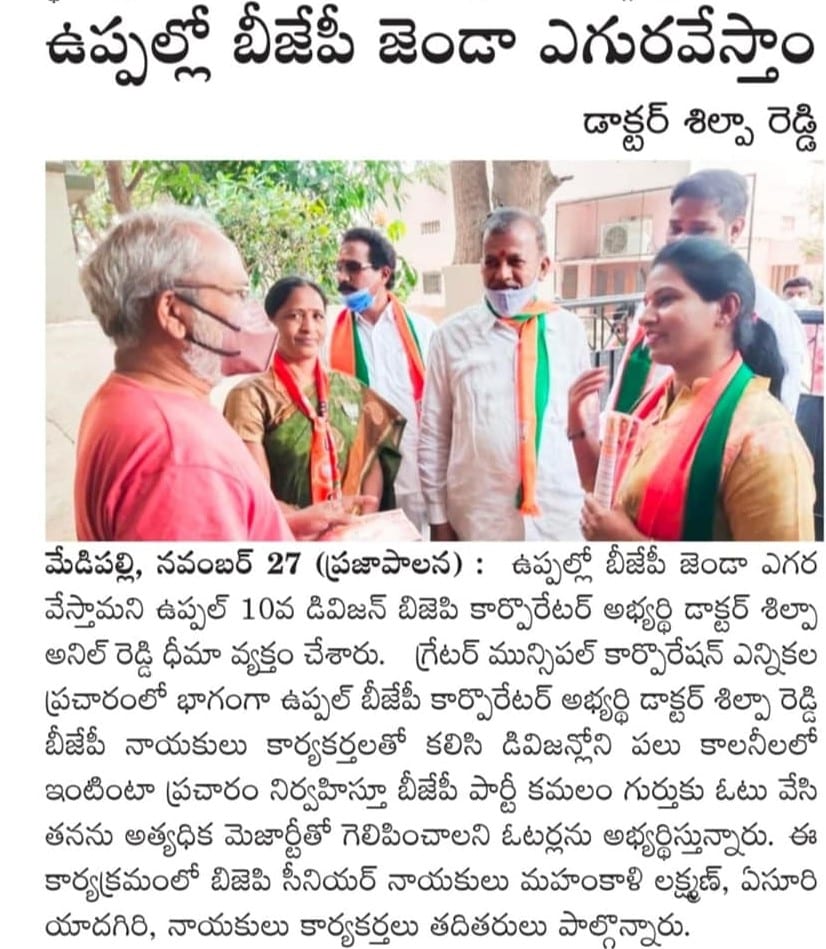 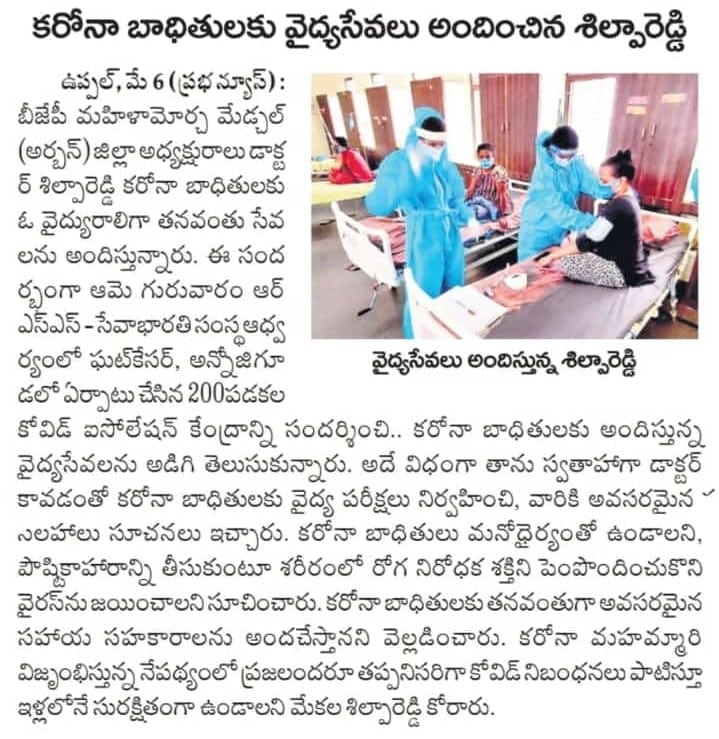