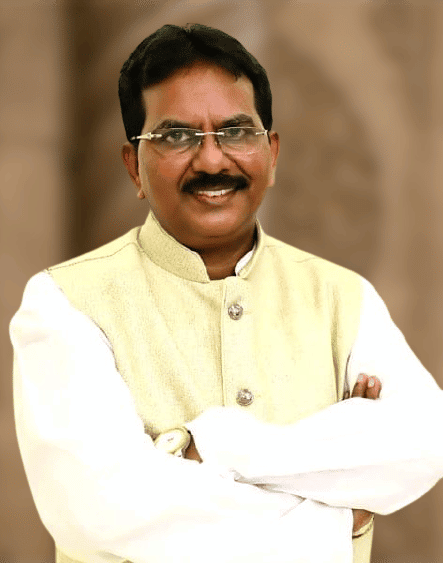 Majety Satya Bhaskar is the Puducherry State Vice President of the Traders Federation.

Satya Bhaskar was born on the 19th of March 1961 in Rajahmundry, Andhra Pradesh, to the couple Mr. Majety Subba Rao and Mrs. Ramarathnam.

Satya Bhaskar received his Secondary Board of Education from Mahatma Gandhi Govt. Boys High School in Yanam in 1976 and his Intermediate Course from S.T.P.P. Govt. Junior College in Yanam in 1978.

In 1981, he graduated from Dr. S.R.K. Government Degree College in Yanam, and in 1983, he cleared his postgraduate course of M.Com from D.N.R. College in Bhimavaram, which is affiliated with Andhra University.

Despite being from a farming family, he is a seasoned agriculturist who has produced remarkable yields in his crops and has received several honors and awards from the Agriculture Department for his endeavours.

Participants in the seed certification programme generated very high-quality agricultural crops, which were later acknowledged by the government. He has the farmers under his control and is ready to help them with his knowledge.

Satya Murthy turned professional in 1987, shortly after completing his education, by setting his own business and working as a Civil Contractor.

Prior to returning to the commercial sector, he worked as a Lecturer at Dr. S.R.K Govt. Degree College. He has remained to engage in the business till this day.

Satya Bhaskar has been fascinated with the Ancestral Business of all building materials since he was a youngster, and he is also quite acquainted with it. Working constantly in the aforementioned business operations throughout the last 33 years. Satya Bhaskar was recognized as a proficient agriculturist as well as a civil contractor on civil contract projects.

For the previous 10 years, he has represented the public through multiple service initiatives, including as District Chairperson in the district cabinet.

> Many service events were organized by the Lions Club. As part of this, he organizes medical camps, Free Dental Camps, Conducts Blood Donation Camps, Eye Camps.

> The Association views education as an approach of assisting orphaned out of poverty, and will place a strong focus on play-based learning and vocational training to prepare children for maturity and self-sufficiency.

> The only way to stop the cycle of generations living in such horrible conditions is through education. In aims to spread awareness about the value of education, an awareness campaign was organized in schools and institutes.

> Satya Bhaskar worked extremely hard for the children’s welfare, raising funds and distributing computers to deserving students, as well as establishing a strong foundation by financially assisting them in their pursuit of higher education.

Began working for the organization in 1998 as a Founder and Convenor Secretary for the Farmer Welfare Association, holding a number of positions, including statehood as the statehood movement began in 1997, and he was actively engaged in the effort. As a result “Statehood Youth Forum” was established in order to safeguard the status of the union territory.

Since 2001, He has been served as a Farmer’s Representative on the Pondicherry State Level Coordination Committee on Crop Insurance Member , which is sponsored by the government of Pondicherry and is still serving the society.

He was nominated and elected as the Chairman of the Yanam Market Committee on November 4th, 2014, and he is currently working in the same position, providing excellent services to farmers as a Member of the Market Committee and understanding the value of farmers. He is the Former Member of the Pondicherry State Agriculture High-Level Committee.

– Apart from providing humanitarian assistance to the flood victims, he extended his core of service to providing food to the victims.

– He accuses the authorities of failing to provide adequate compensation through the Crop loan insurance Premium to farmers who have suffered crop loss, and he works to ensure that the farmers receive justice.

– He appealed to the people to take advantage of the welfare schemes approved by the government to make them accessible to the people.

– Satya Bhaskar Organizes awareness programs by briefing about the Crop Insurance and educating farmers on loans from banks, crop yields, and Crop Insurance.

In the year 2000, Satya Bhaskar was overwhelmingly chosen to the position of Honorary President of the “Yanam Merchants Association,” and in addition to assisting the dealers and the association.

In the year 2006, Satya Bhaskar and his Co-Members established the Puducherry Traders Federation and Confederation of All India Traders(CAIT) and were appointed as the Vice President of the respective federation for the towns Kodaikanal, Hamen, Yanam, and Pondicherry.

In 2007, he successfully organized the Yanam Shopping Festival with the assistance of the Pondicherry Shopping Festival Committee and the Tourism Department, all under the supervision of Thiru Sivasankar and Thiru Balu. The association received the positive recognition as a result of this event. For the Pondicherry Traders Federation, he was nominated for the position of Vice President.

He was a  Life Member of the Confederation of All India Traders (CAIT), based in New Delhi. Satya Bhaskar and also served as the Vice President of The Yanam Contractor Association.

He is a Life Member of the Red Cross Society and was the Executive Committee Member of Arya Vysya Maha Sabha of Andhra Pradesh and also a Member of the Vasavi Club by actively involved in community service initiatives in the area.

As a Social Worker, He received a responsibility by providing social services to the public whenever they are needed, such as during natural disasters or by running medical camps by providing medicines to the needy.

Satya Bhaskar structured a spiritual mandapam at the Shivalayam temple and donated his part of the land for the construction of Sri Kanyaka Parameshwari Temple and Sai Baba Temple as well .

In the Industry and Business:-

In the industry, he has received several Best Seller Awards from multiple companies, and even the Puducherry Traders Federation and the Confederation of All India Traders ‘honored with Lifetime Achievement Award.

Satya Bhaskar’s Parents were Majety Subba Rao and Ramarathnam. His father served as the President of the Yanam Block Congress Committee and was a close confidant of our past chief ministers Sri Venkata Subba Reddiar and Sri Shanmugam.

Satya Bhaskar’s father is also a Construction Contractor. Bhaskar is the eldest son, with one elder sister and three younger siblings. 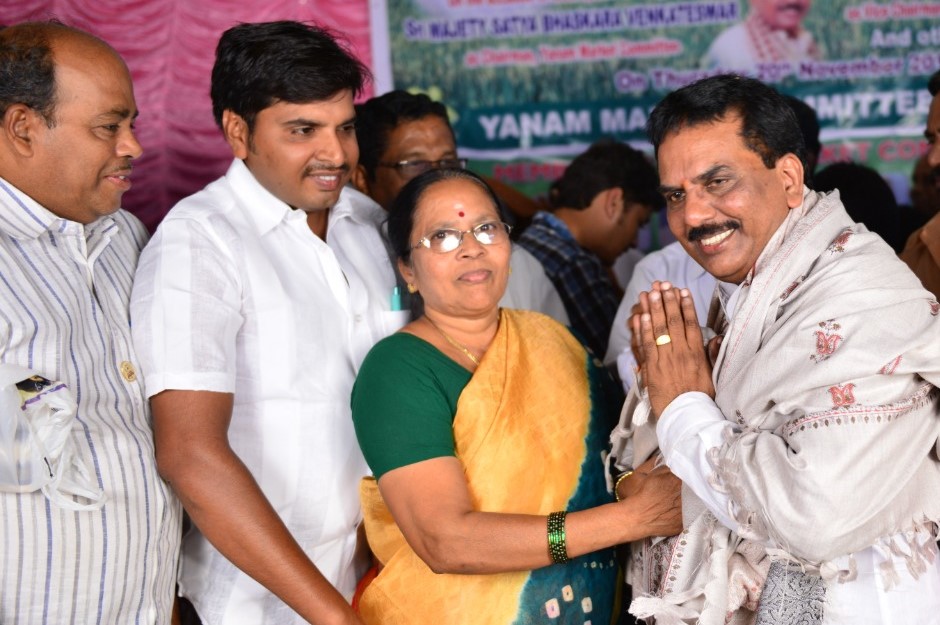 Majety Satya Bhaskar was honored with a shawl at the swearing-in ceremony of the Chairman of the Yanam Market Committee. 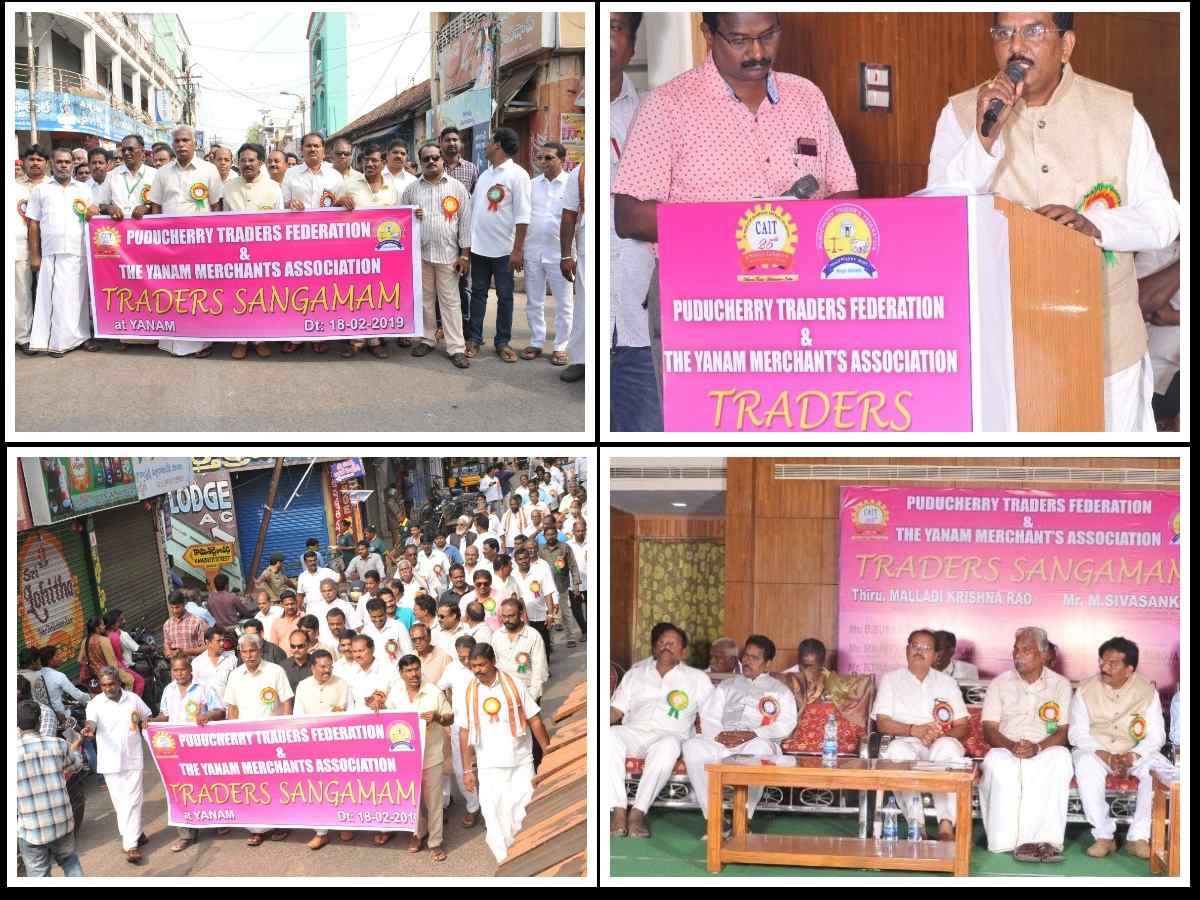 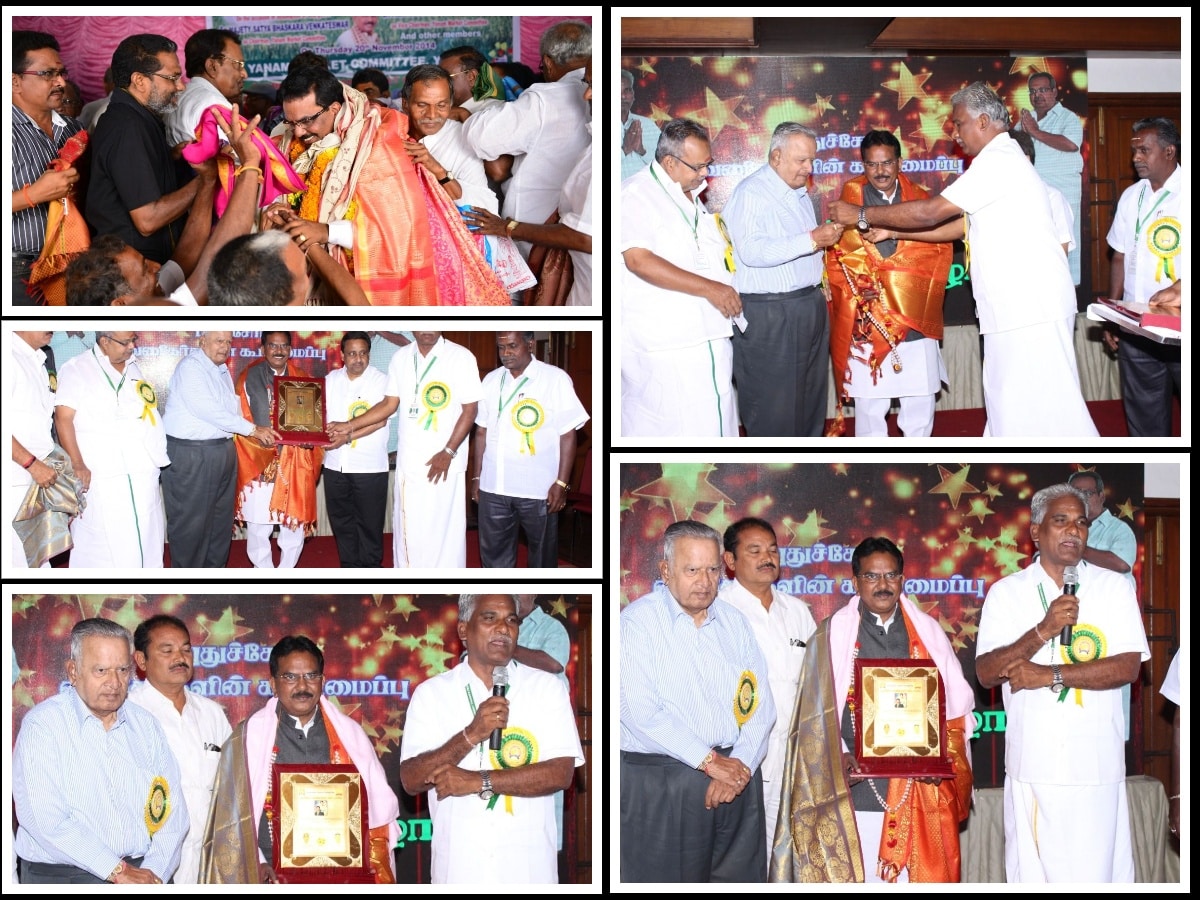 The Confederation of All India Traders and the Puducherry State Traders Federation presented Majety Satya Bhaskar with the Lifetime Achievement Award at Kodaikanal. 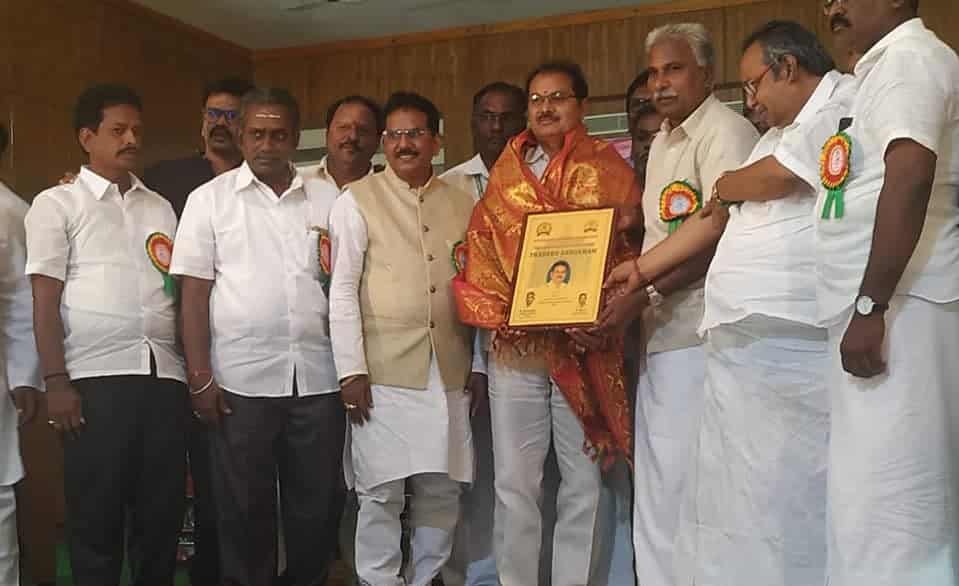 Over 70 merchants and Yanam Traders from Puducherry, Karaikal, and Mahe attended the conference organised by the Puducherry Traders Federation and the Yanam Merchant Association at the Agnikula Kshatriya Kalyana Mandapam at Yanam Bejwada Garden. 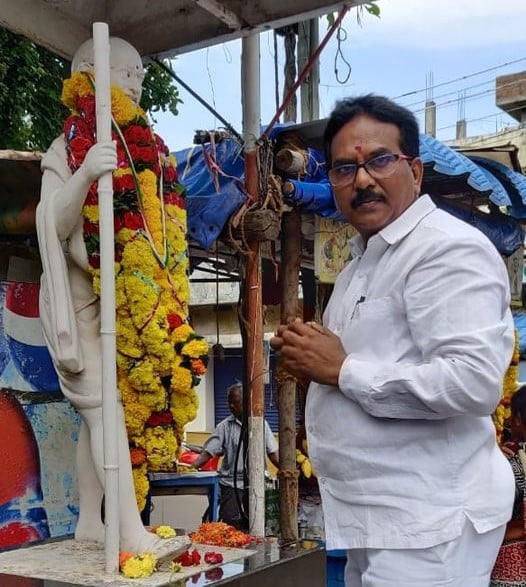 On the occasion of Mahatma Gandhi Jayanti, the members of the trade association laid flowers at the statue of Gandhiji on Yanam Tyagaraya Street and distributed sweets. The event was attended by Majeti Satya Bhaskar, Honorary President of the Chamber of Commerce and all textile traders. 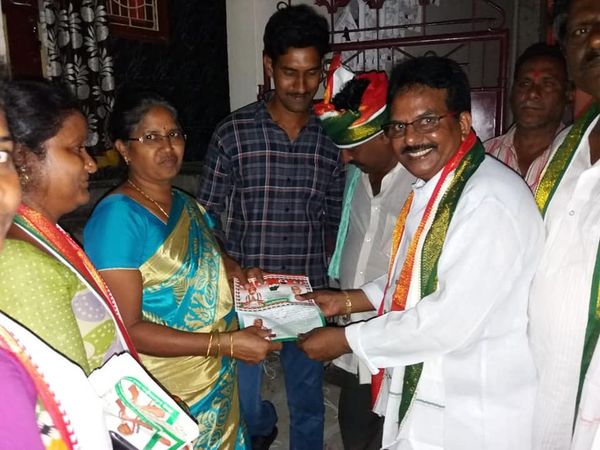 As part of the election campaign in GMC Balayogi Nagar, activists and elders took part in the campaign to vote for Malladi-backed parliamentary candidate Vaidyalingam and win the candidate. 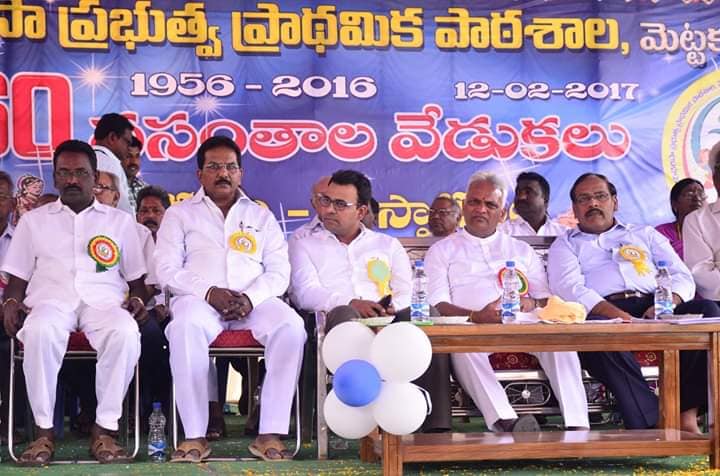 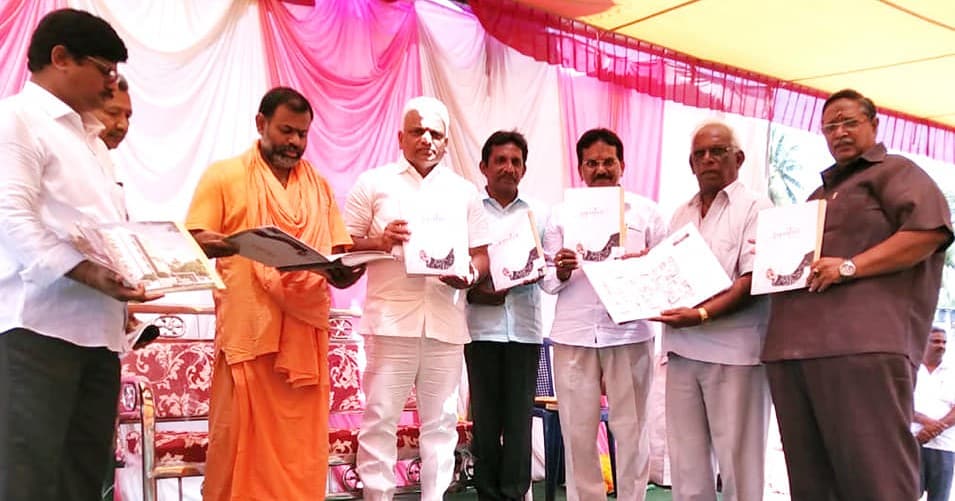 The Yanam Cloth & Readymade Association went in procession and congratulated the Indian hero on his return to our country. 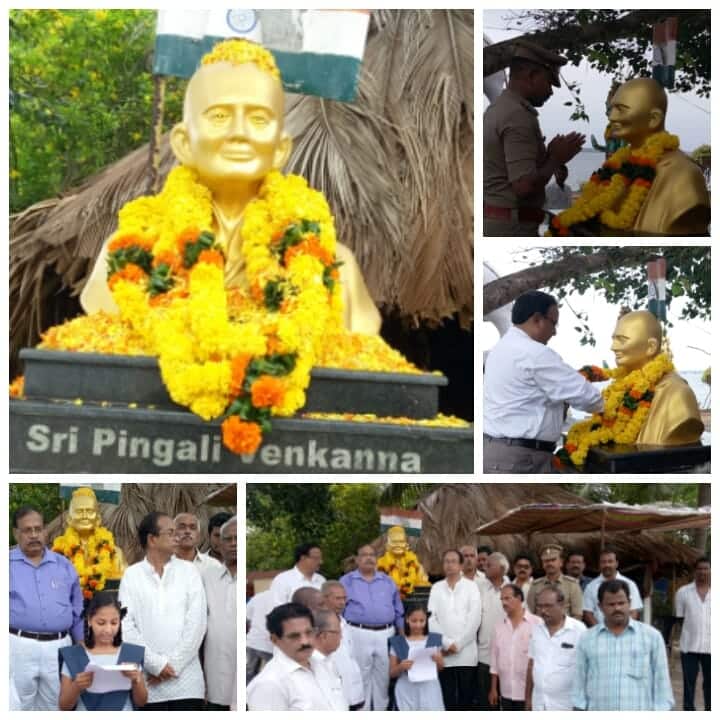 Officials and leaders who laid wreaths at the statue after attending the death anniversary of Sir Swami Vivekananda and National Flag bearer Pingali Venkayya Garu. 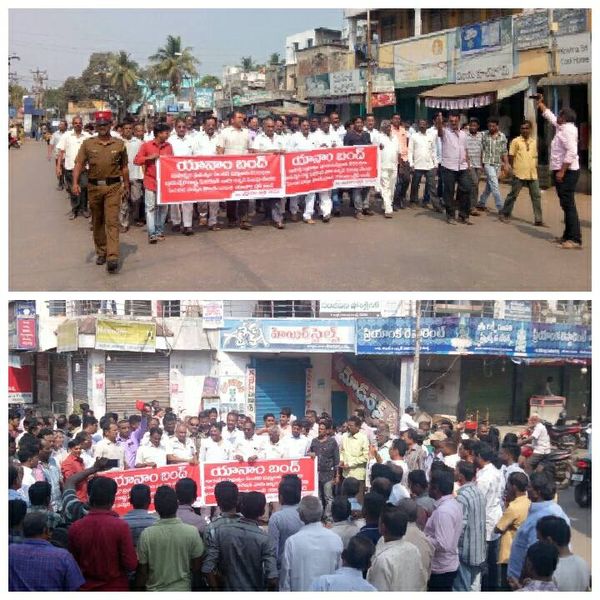 The Yanam Trade Union organized a 24-hour Yanam Bandh in Yanam to protest against the hike in taxes by the Puducherry government.

On the occasion of the death anniversary of the late Dr. YS Rajasekhar Reddy, Chief Minister of Andhra Pradesh, flowers were laid and tributes were paid to Y.S.R.

On the occasion of Meeting with Eminent People 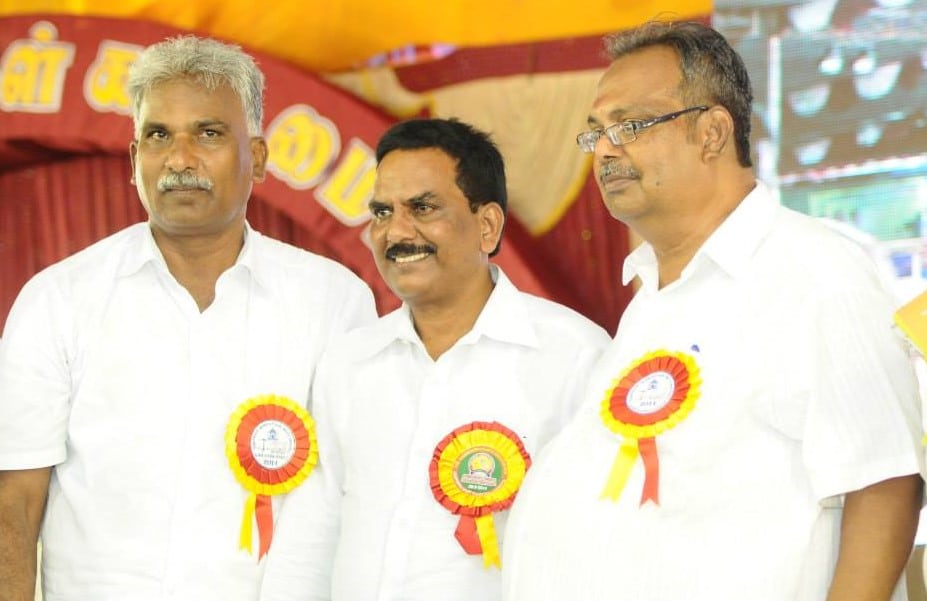 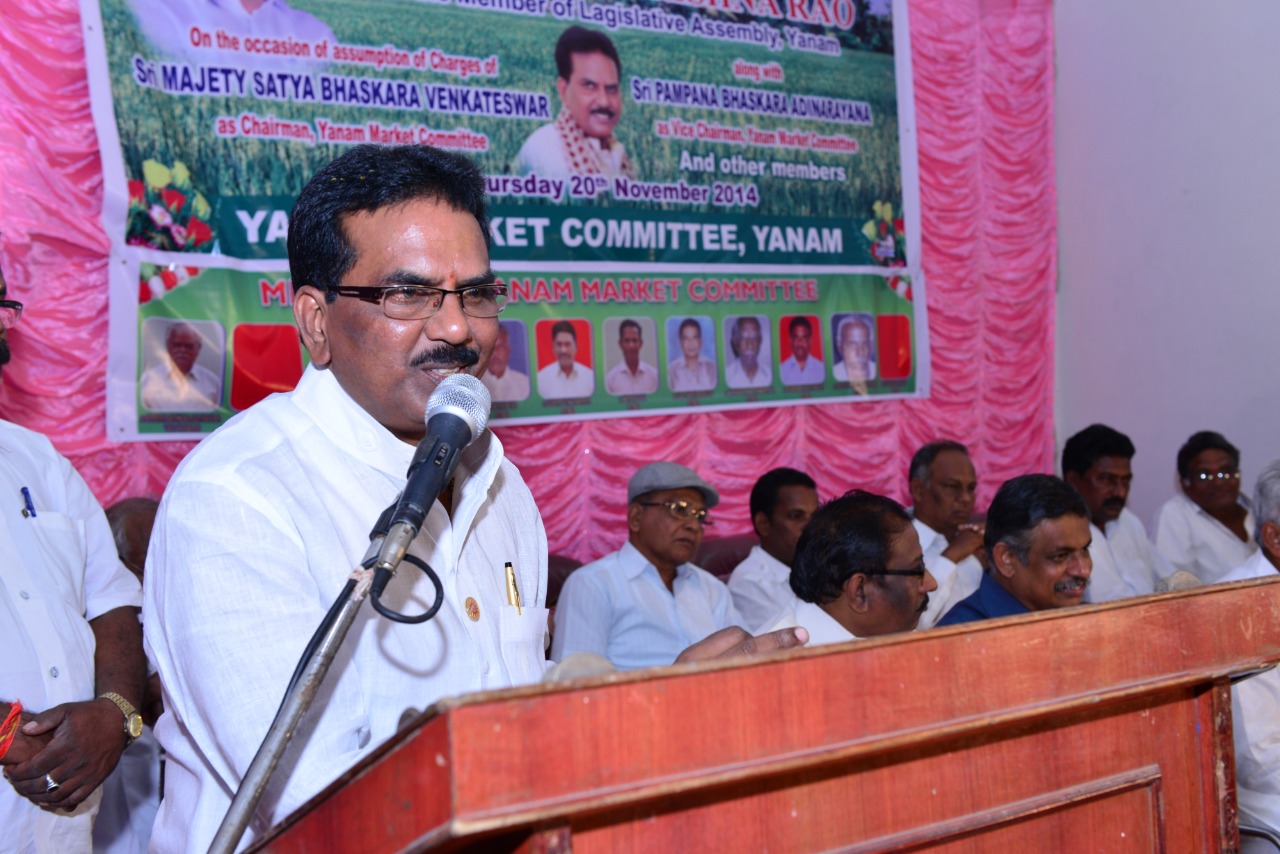 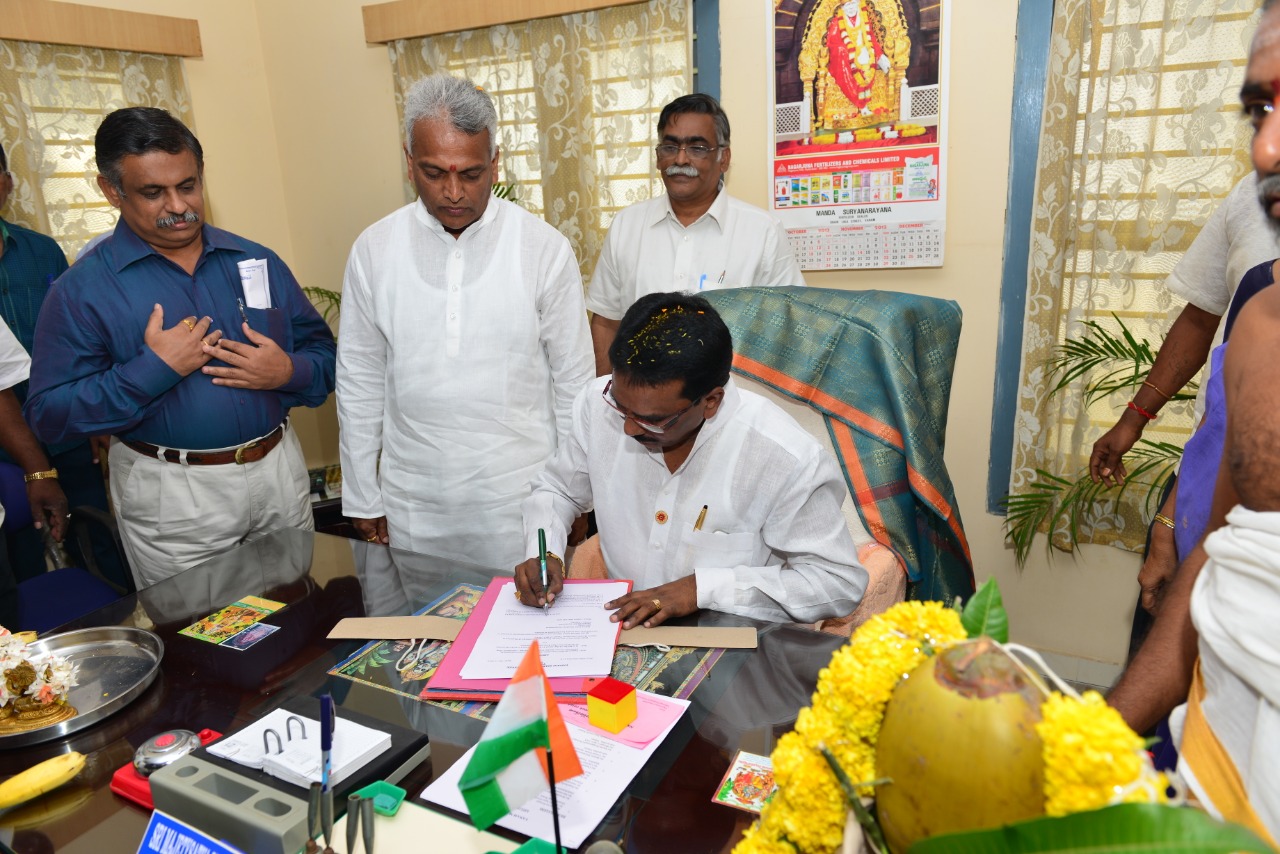 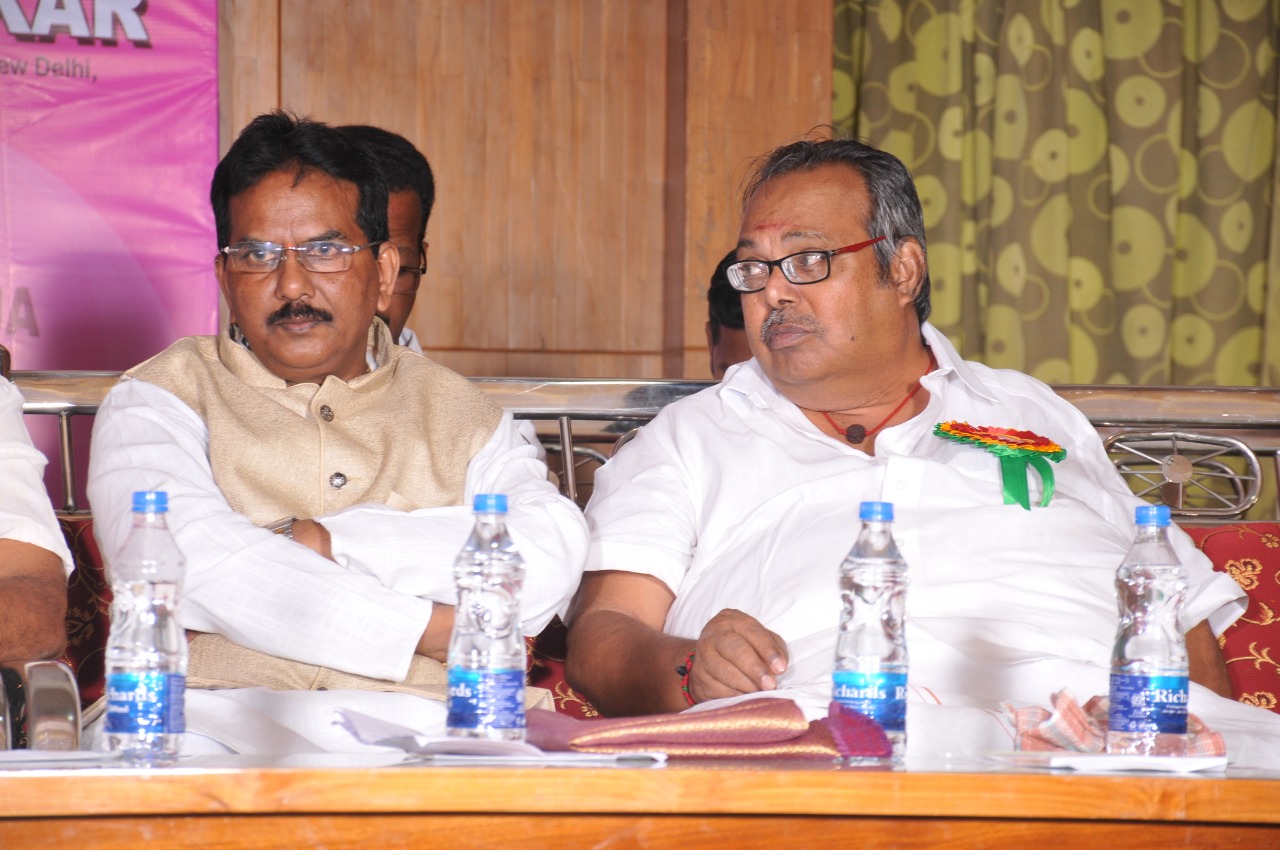 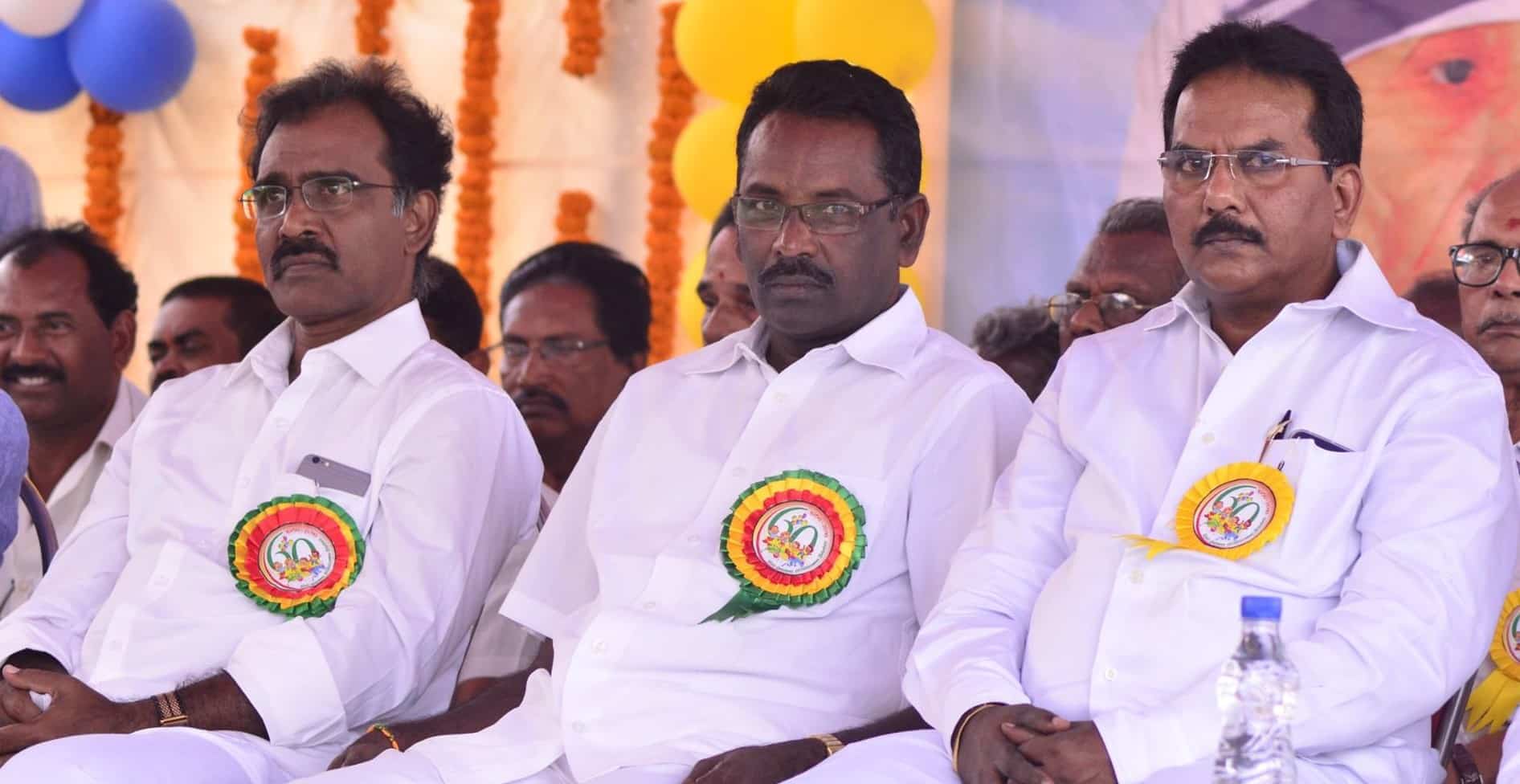 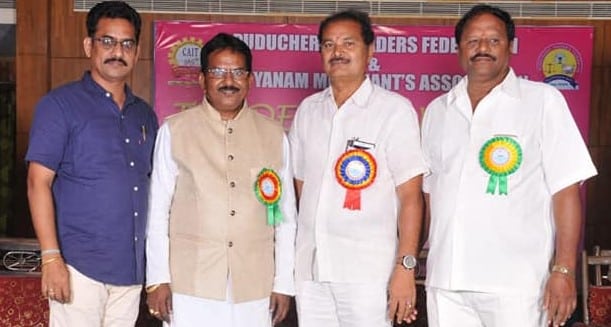 In the instance of a Gathering 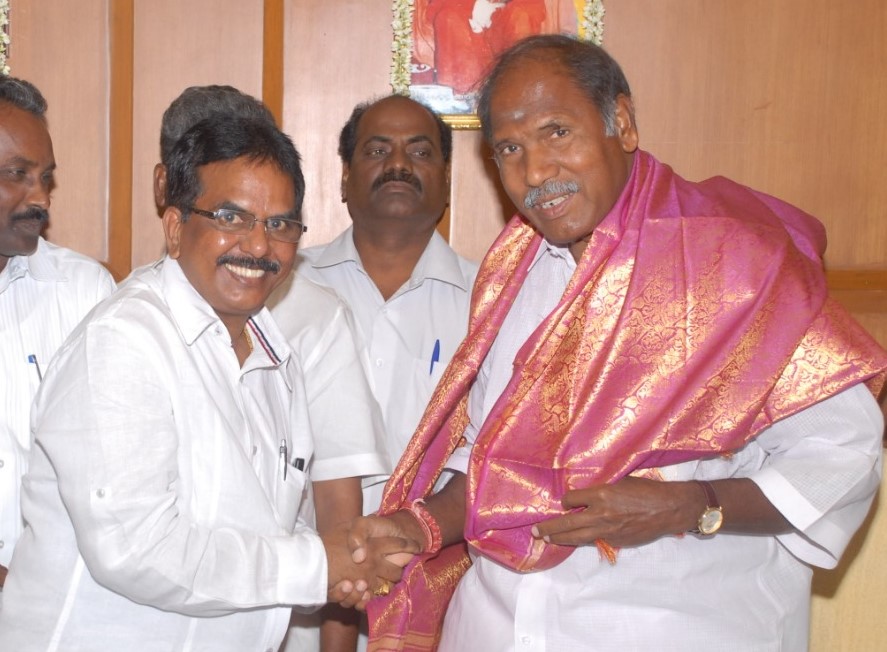 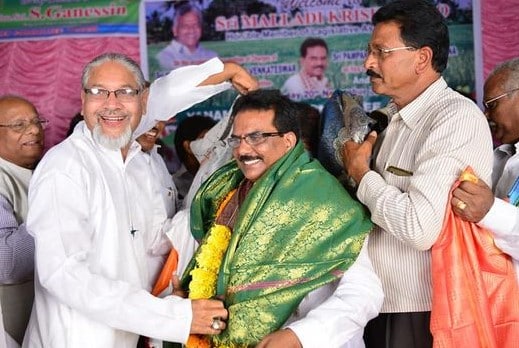 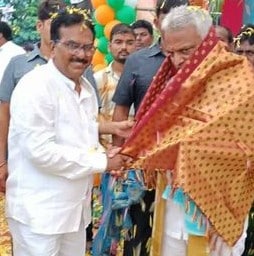 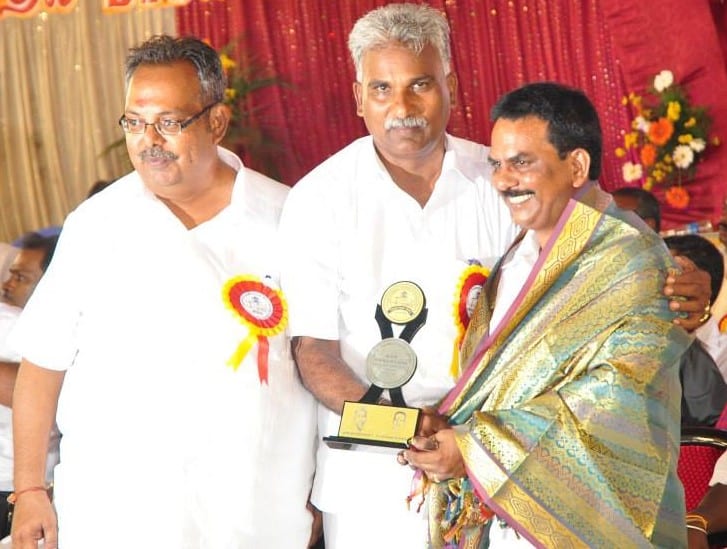 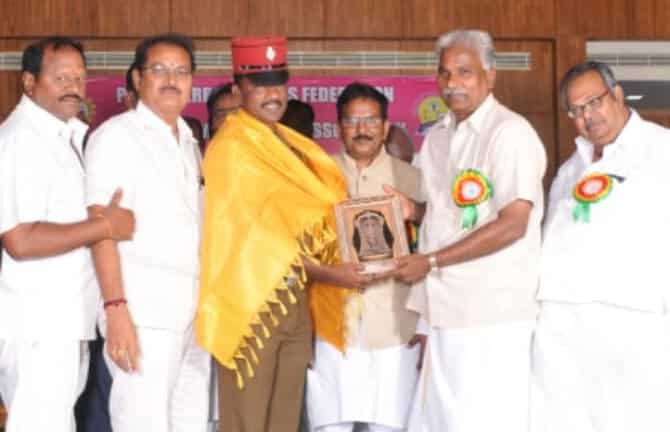 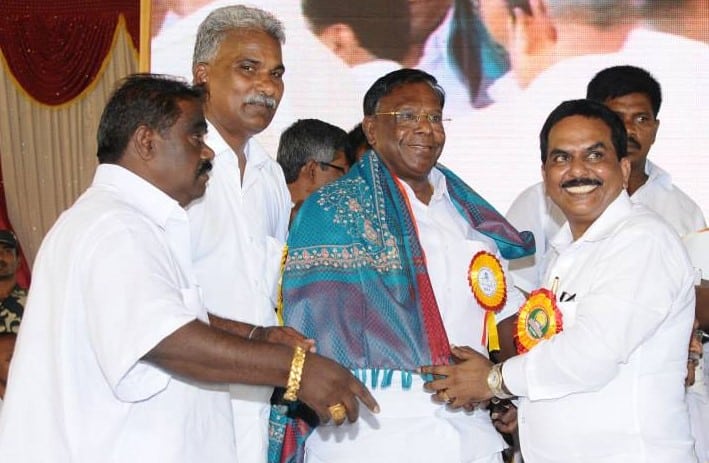 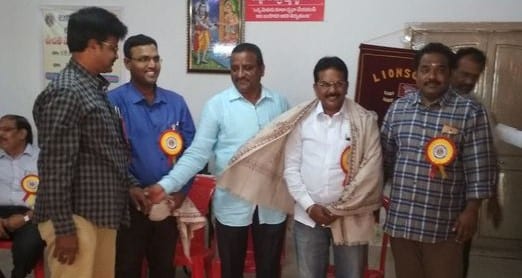 for the Farmer Welfare Association

of Puducherry Traders Federation and Confederation of All India Traders

of Confederation of All India Traders, New Delhi