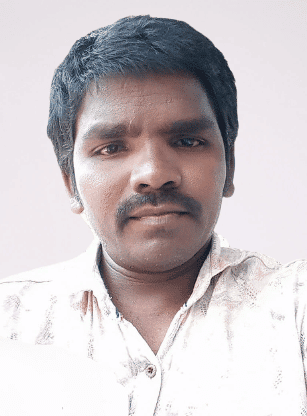 Kothapeta Kishor is the Social Worker. He was born and bought up at Mahal on 02 February 1975 to the couple of Mr & Mrs. Kothapeta Gangaiah and Kothapeta Reddamma.

In 1991, He received his Secondary Board of Education at ZP High School, Mahal.

Kishor had a strong desire to serve others since he was a youngster, and this desire led him to become a Social Worker who hoped to bring happiness to others via his work.

He extended his everlasting pure heart and generosity to many poor, needy people.

On the one hand, while serving, concurrently started his professional career by working as a Painter.

With his selfless dedication, he has garnered hundreds of admirers.

-He Participated in the Village development activities in the village like Solving water Problems.

-Conducted many meetings and development activities for community development.

-Every Year he celebrates Freedom Fighters Birth anniversaries and distributes food packets to the villagers and also conducts Cultural and Traditional programs in the    village.

-He is constantly being fought over the People’s problems and petitions are being handed over to the concerned authorities.

-He came forward to help the needy who have been affected by lockdown and distributed Rice bags, vegetables to the villagers, needy ones, and Municipality workers by following the precautions.

-He distributed fruits and medicines to the village’s unhealthy students and needy people.

-Conducted Annadhanam Program, which is served and satisfied many hungry people in his village.

-Money was donated to the families of the poor during the wedding to support their families financially. Kishor assisted the death-affected family financially for their survival.

-If anyone in the village encounters any problem, he will be at the forefront of the problem. He will assist those who come to him for help and provide the essential things that they require.

-He is constantly available mainly to the poorest people in the zone.