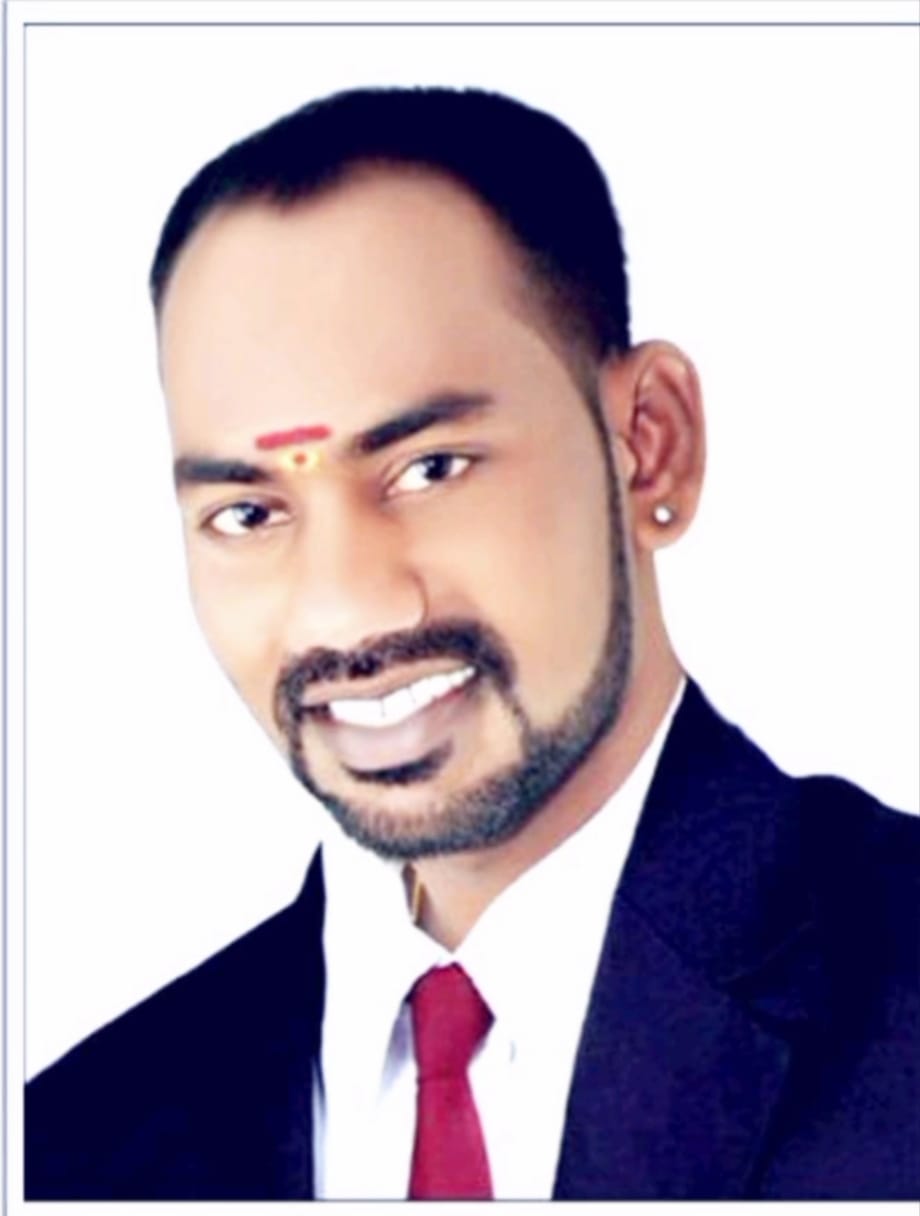 Karate Shiva Yadav is the Karate & Kickboxing Coach and also serving the people with great enthusiasm as a Social Activist.

He was born on 10th June 1987 to the couple Sayanna and Manamma and raised with his family in Kanaipally Village of Kothakota Mandal in the district of Wanaparthy.

In the year 2004, He earned his Higher Board of education from ZP Secondary School resided at Kothakota.
Later, he completed his undergraduate from Government Junior College located at Kothakota in 2008.
He acquired his bachelor’s degree from Sri Vidya Degree College placed at Kothakota and accomplished it in 2012.

Of all the indoor games, karate & kickboxing is Shiva’s favorite because it helps oneself against the issue and helps everyone to be self-dependent.

Since the date he brought up, Shiva has inspired by academic persons and has been shown a keen interest in Karate & Kick Boxing. These combined art defines his passion, as it shows him how countless dreams turn into reality.

AS A SPORTSMAN AND COACH:

While performing his duties, Shiva attends regular practice sessions and undertakes private training to maintain the required standard of fitness.

He takes part in scheduled sporting competitions and alters the sporting equipment and takes into account the sports promotional activities that benefit the Students which results in the expansion of his Work.

Since growing years, He has been determined to be a Coach for Martial arts. The determination he took made him set up an Academy of his own named Tiger Bruce Lee Shotokan Sports Karate and Kickboxing Academy in 2007 as his dream is to make his trainers in an acquired position.

And soon after establishing the academy he influenced and motivated them in different stages of their life to became a good example to many of the people, to fight against the odds in life, to attain success, and most importantly to be happy in life are exemplary. Shiva Yadav is regarded as one of the best contemporary Coaches.

Activities performed through the Academy:

> Explaining Dharma, about customs, about cultural traditions, about the way human beings behave, he strives not to oppress society without enslaving them to bitter habits.

> He is striving hard for the complete abolishment of the differentiation between touchable-untouchable, higher caste and lower Caste and to promote the harmonious development of society and also for the protection of the Cows and set up of Cowsheds.

AS A SOCIAL ACTIVIST:-

From an early age, Shiva was very interested in rendering Service and his interest turned him into a Social Worker who expected the happiness of the people through his service.

His sense of Service was exposed by joining as a Member of the Vivekananda Association which is a Non- Profitable Organization that rendered services to poor and Needy People.

– Shiva has performed many social and welfare activities through the organization by assisting the people financially and Manually.

– Every year, On the Birth anniversary and Death anniversary of Swami Vivekananda, who introduced Hinduism to the Western world, the flowers are laid to the portrait and pay homage for his services.

– He was very supportive of education and under his auspices seats were given free to poor students and fought hard and persevered on the problems faced by the College and college students.

– He extended his services by assisting the family by donating a certain amount for their well-being who are deeply affected by the assassination of the person.

– He helped the old and poor people in the village by providing the basic essentials to them for survival and also assisted them during the financial crises.

Karate is a defensive art from beginning to end 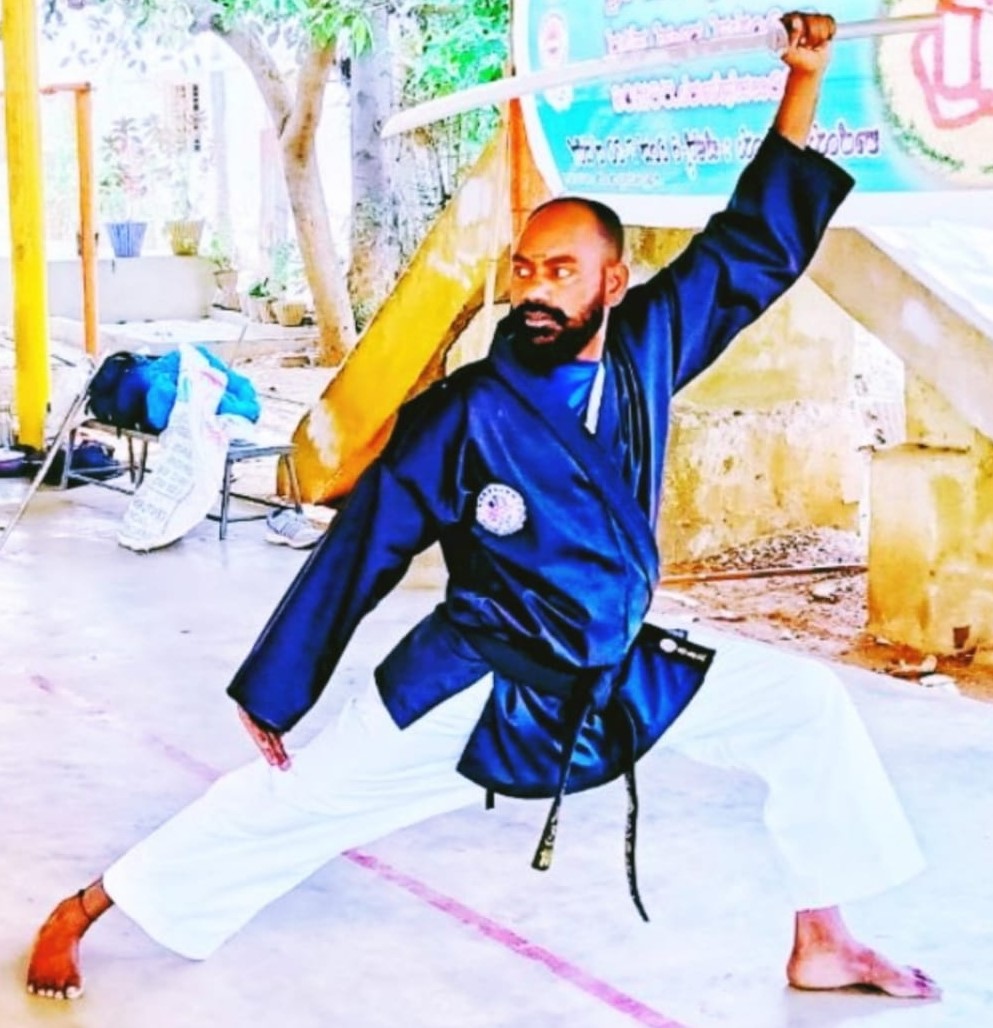 “Actual battles is at the passion of our martial art.

There can be no proof unless there is actual fighting.

There could be no integrity without justification.

There is no acceptance without commitment. This is

a definition in the martial arts world.” 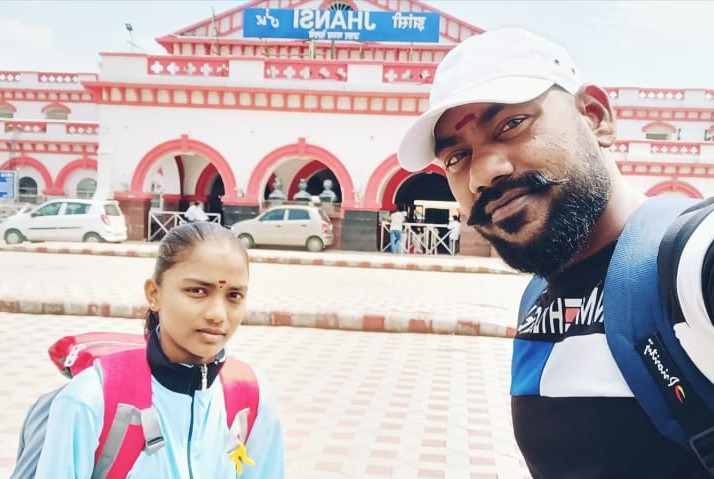 Sindhu, a student from Kanvayapalli village in the National Boxing Zone organized by Fit India in Jammu and Kashmir. She competed in the under-17.40 kg category of the Women’s Boxing Championship and won gold in the girls’ event against Haryana, Punjab, and Maharashtra. Also selected for the International Women’s Boxing Championships in Nepal. Coach Shiva Yadav brought the matter to the attention of the village elders as they were facing financial difficulties to participate in the national competitions and they provided financial assistance. 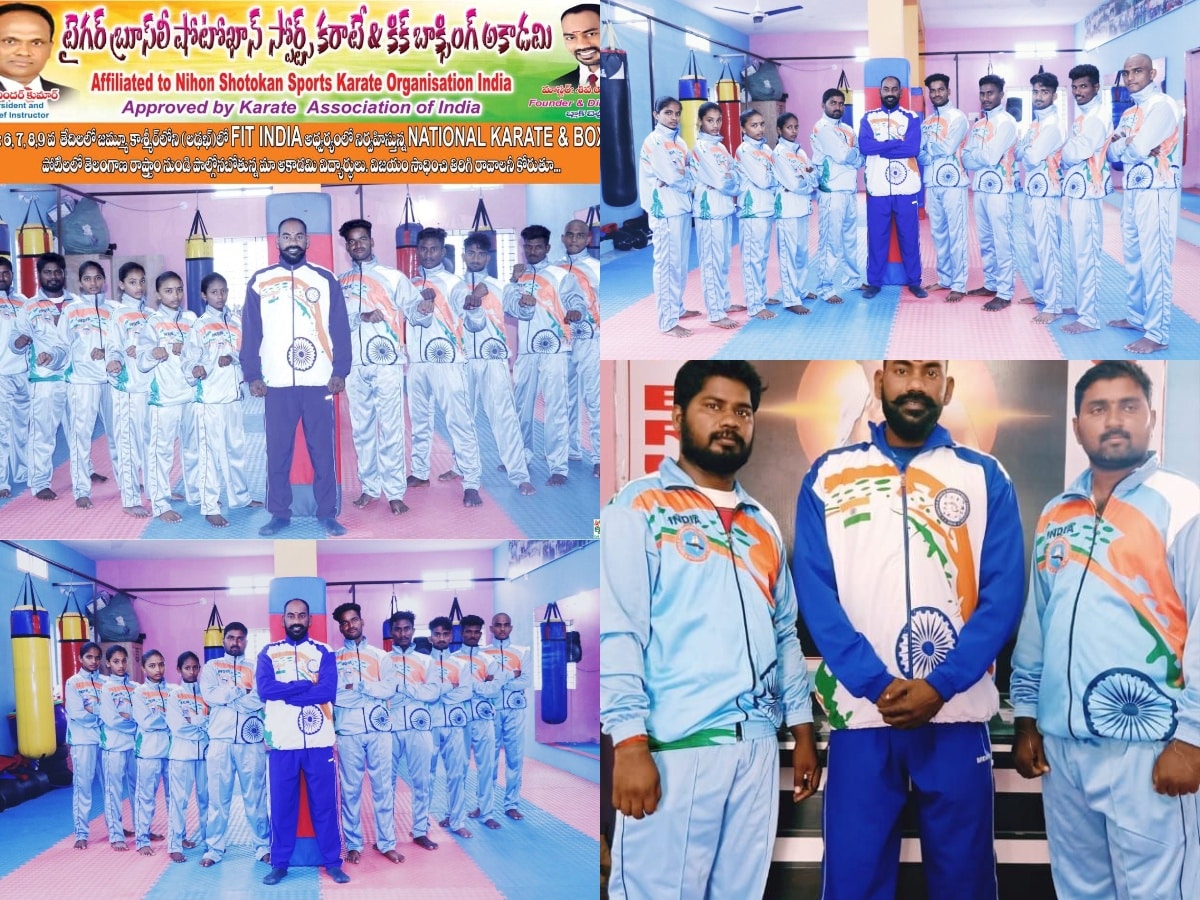 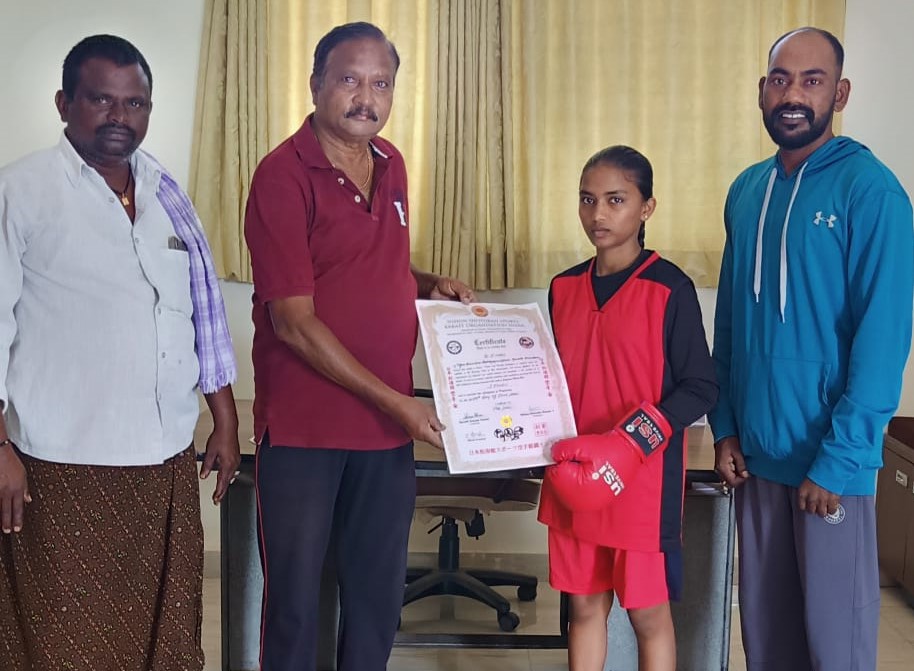 An official presents a certificate to a trainee boxer. 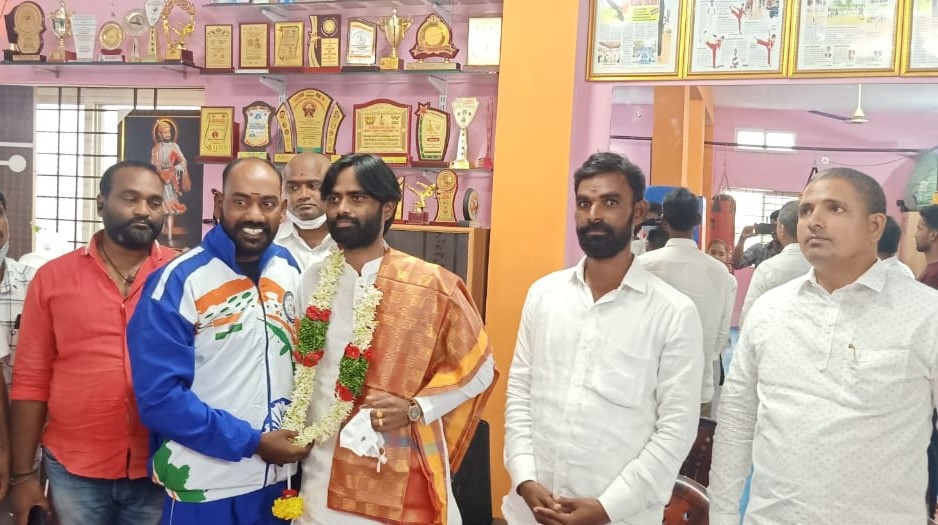 Shiva Yadav conducting an Honor Ceremony for a person by laying a Garland on him. 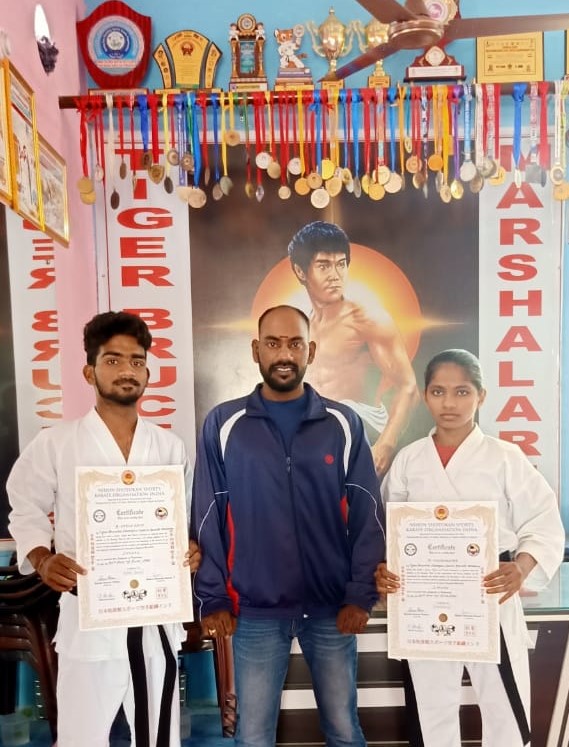 The basic Stances of Karate 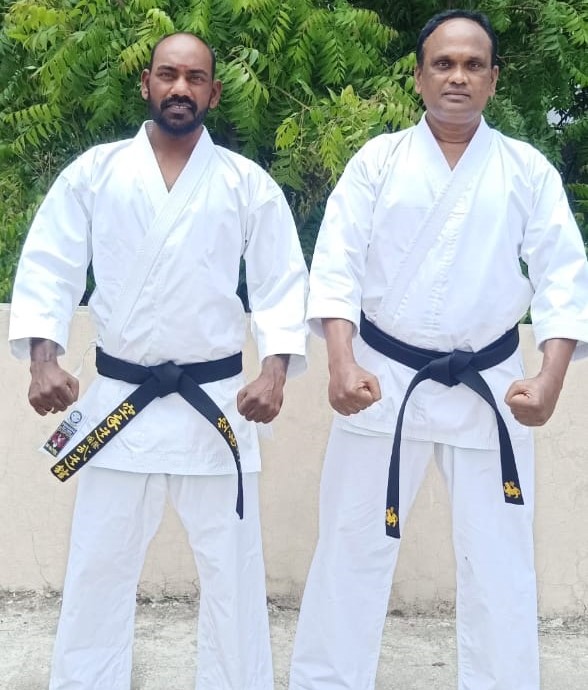 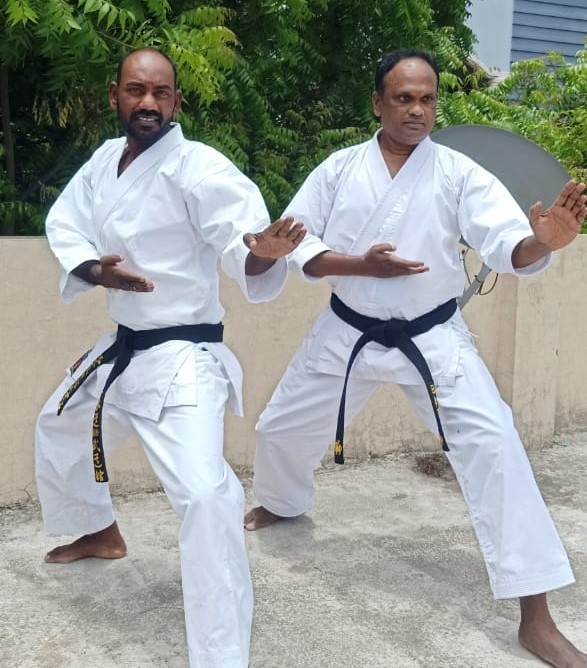 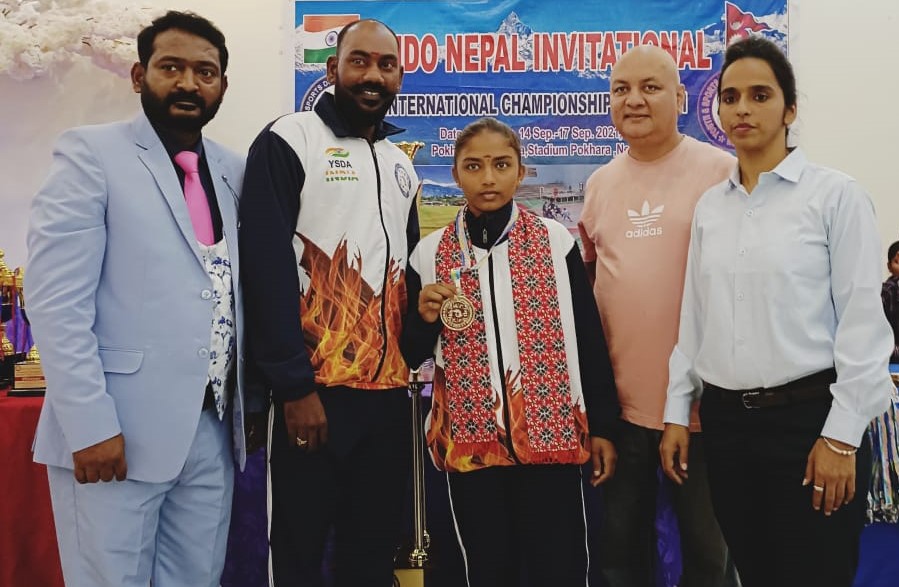 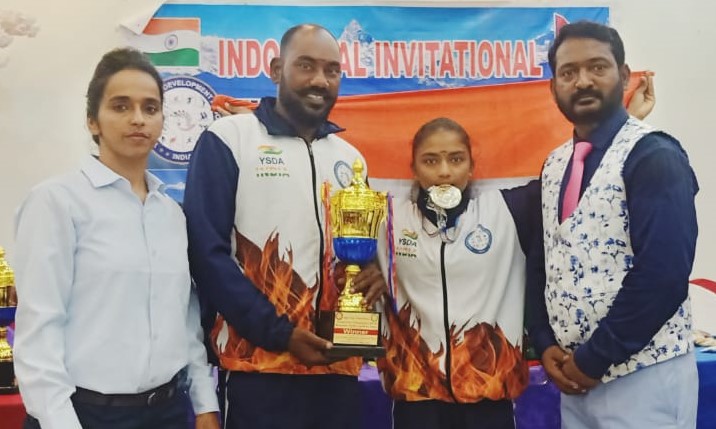 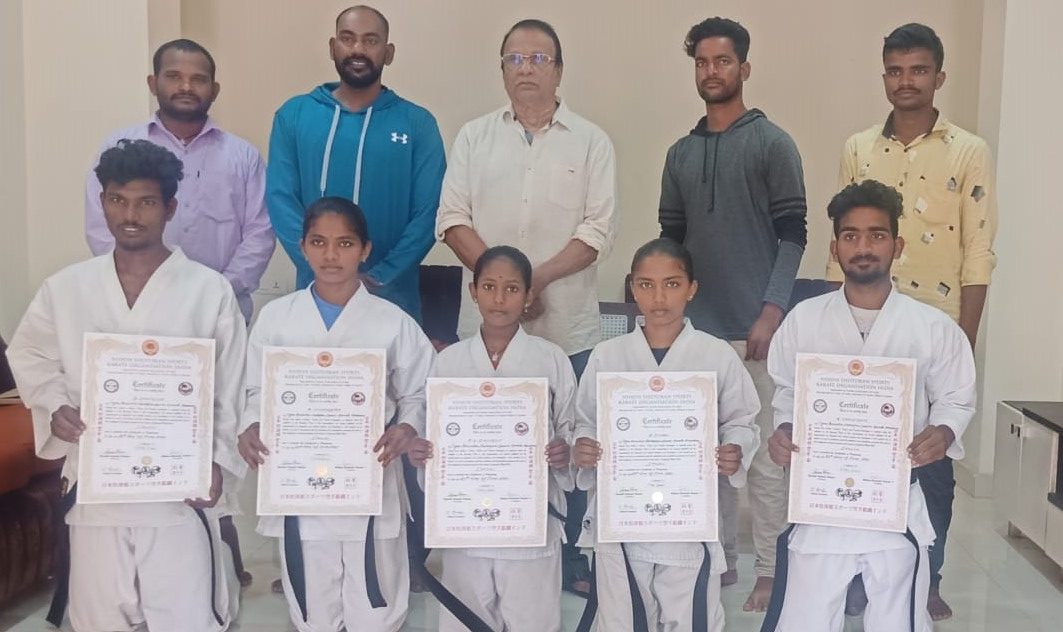 Championship to be held in Delhi. 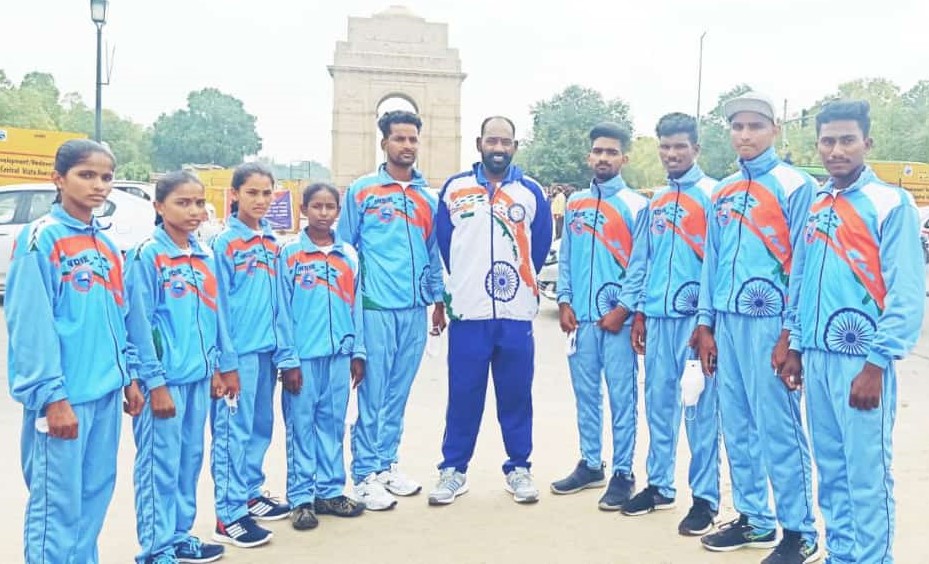 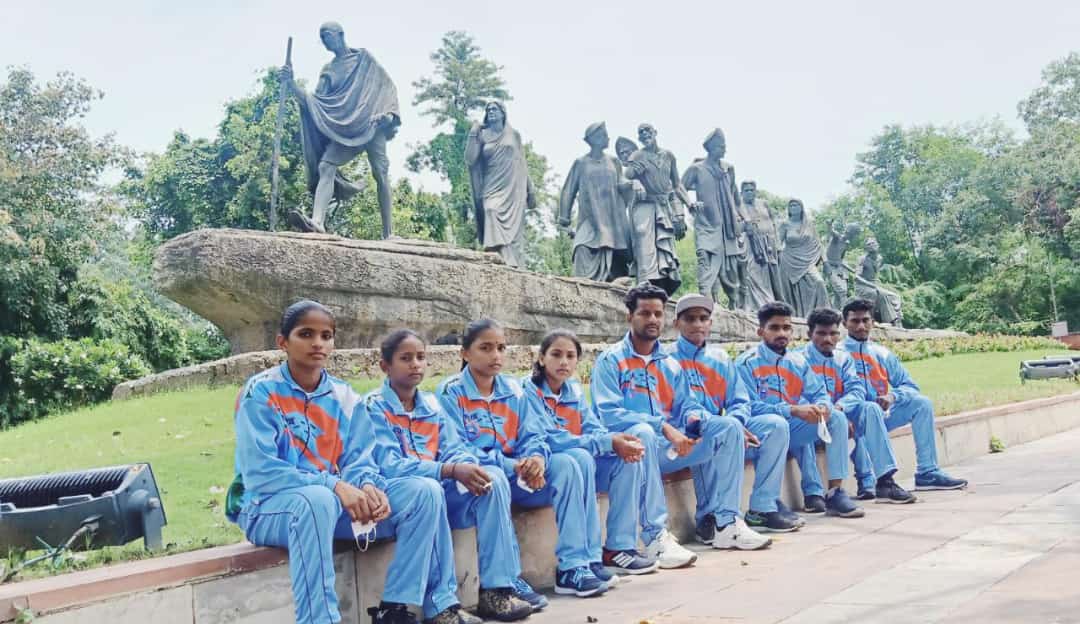 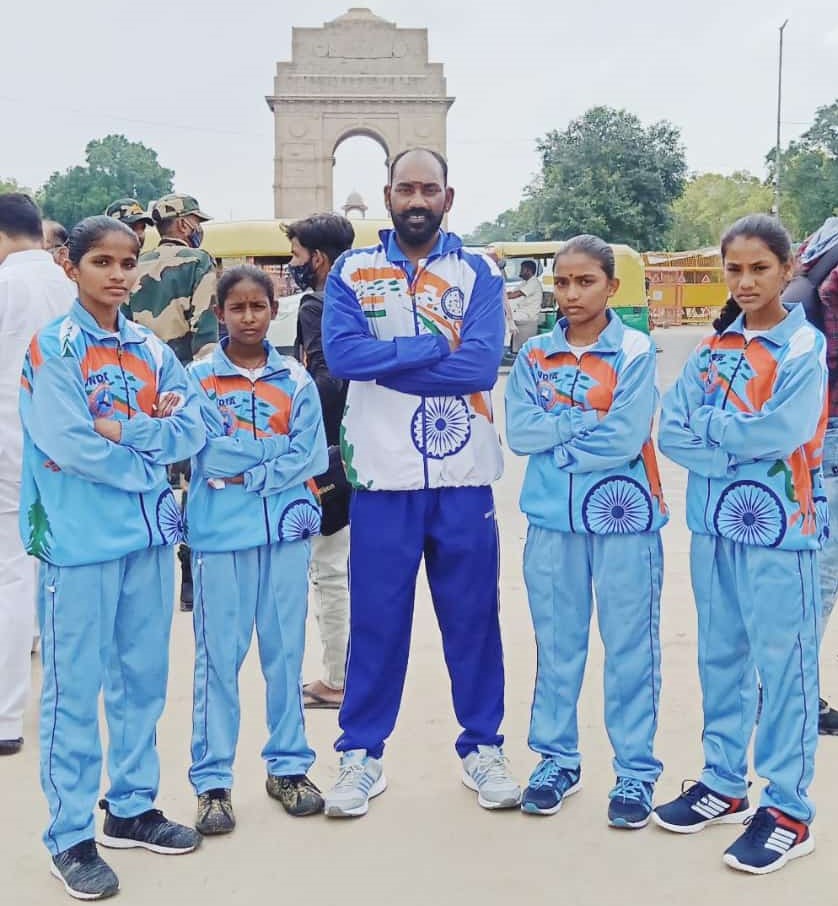 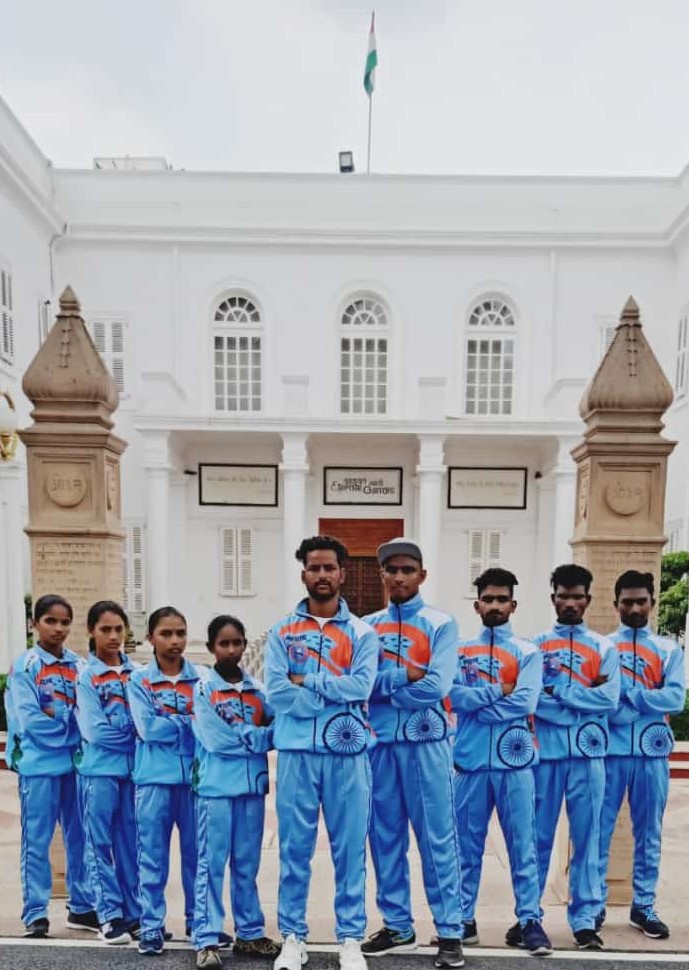 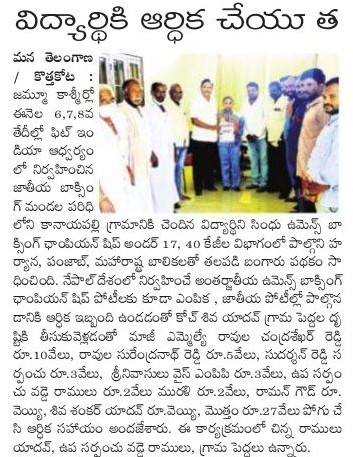 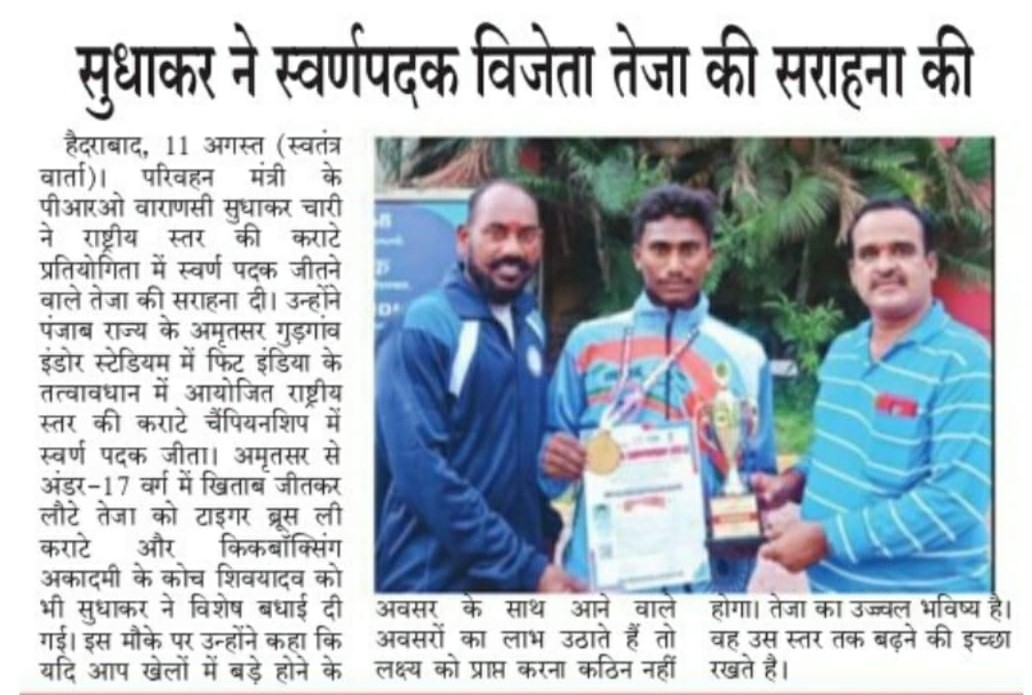 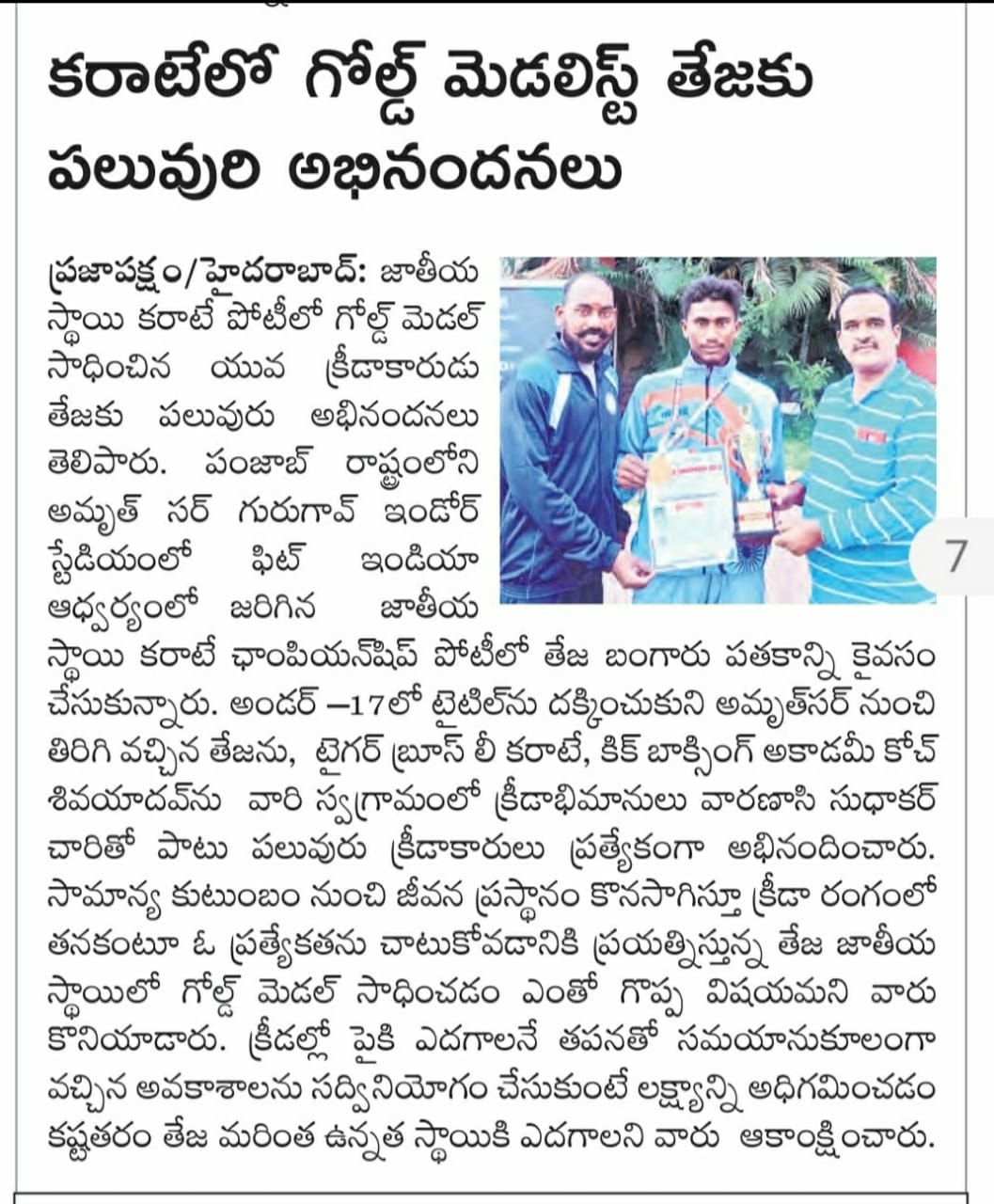 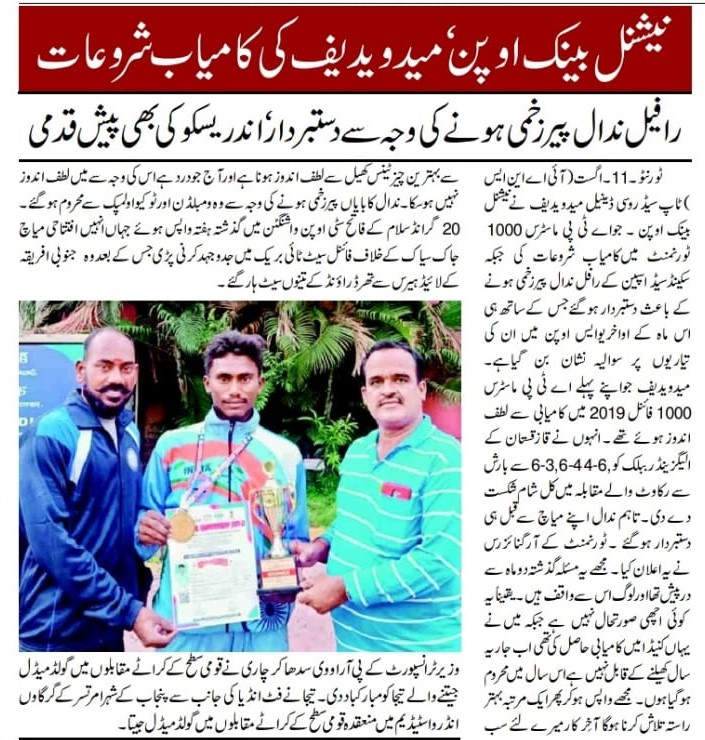 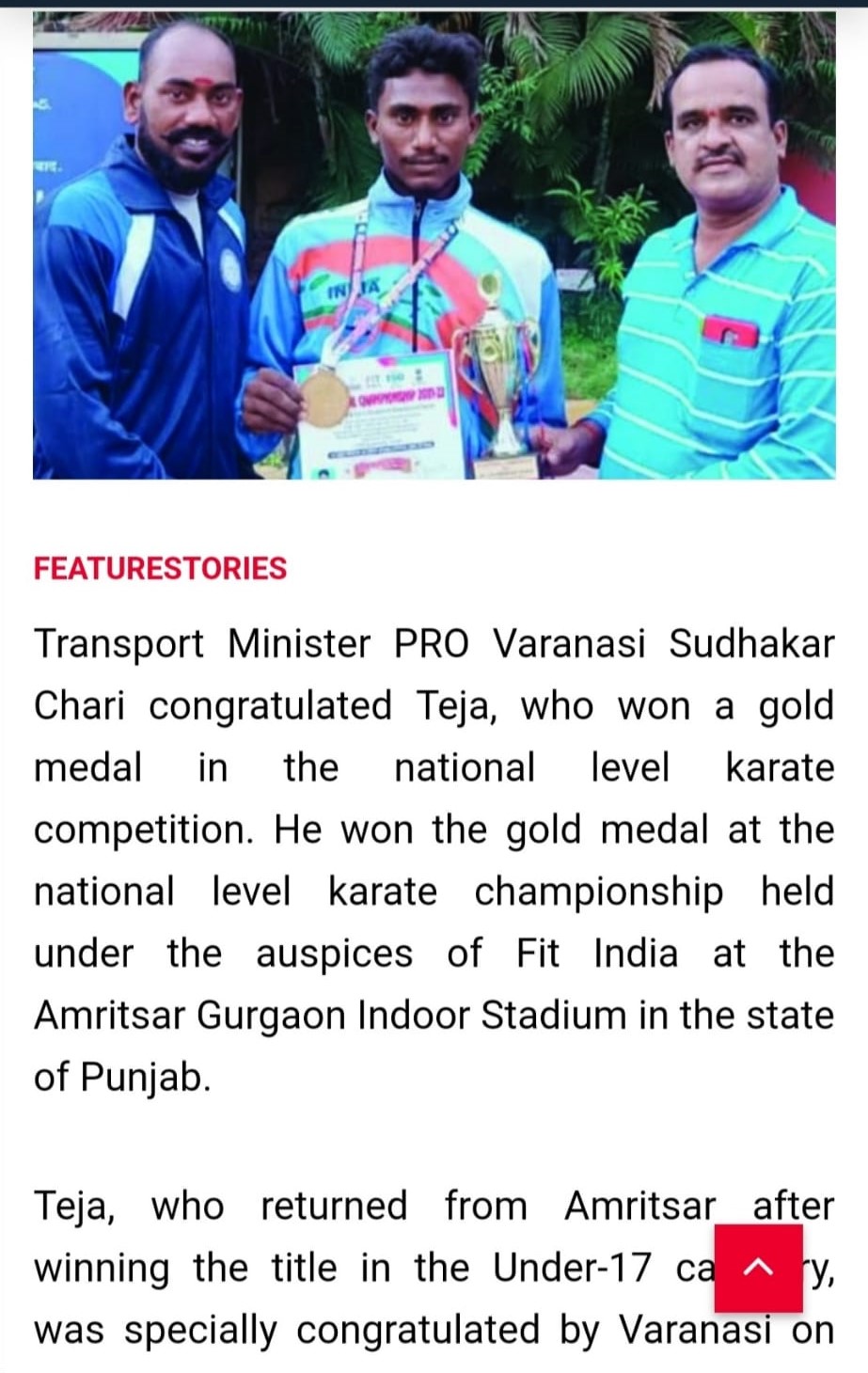