Kanakam Sampath is a well-known Indian Politician and Founder & Chairperson of Amma Association who, rather than constrain his work to a specific area, has broadened his scope by dedicating himself to social service in a variety of disciplines, including Politics.

On the 08th of August 1980, Sampath was born to the couple Mr. Kanakam Lingaiah and Mrs. Kanakam Laxmi in the village of Muttaram of Karimnagar district in the Indian state of Telangana.

He never believed in any Fancy education, he had a simple educational background as anyone did and in the year 1994, Sampath acquired his Secondary Board of Education from Sri Krishnadevaraya High School located at Karimnagar in Telangana.

In the year 2019, Sampath debuted in the Bahujan Samaj Party (BSP) a national-level political party in India that was formed to represent Bahujans, referring to Scheduled Castes, Scheduled Tribes, and Other Backward Classes, along with religious minorities.

He exposed his leadership skills by serving as the Village Treasurer and working comprehensively all the time for the welfare of humankind. As a part of BSP, Sampath expressed a keen interest and performs every activity for the recognition of the respective party.

He won the admiration of the people by using the responsibilities, duties, and powers assigned to him so that in 2020, he was honored as the Mandal In-Charge from Shankarapatnam in the Indian State of Telangana for the good of the people without compromising on the trust placed in him.

In 2021, he was promoted by receiving the authority as a District In-Charge from Karimnagar of Telangana by increasing his responsibility and continuing his service, thinking for the welfare of the people for the moment and dealing with the activities for the development of the Society.

Sampath has been used to being served since he was a teen and with the sole idea of helping the poor, in the year 2010 Sampath established an Amma Association affiliated with Amma Ashramam at Muttaram in the state of Telangana. From the day of establishment, he imparted a sense of affirmation and a desire to serve the organization by constantly attempting for the well-being of the society and articulating his views of service. 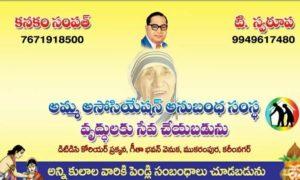 Sampath has been acting as the Founder & Chairperson of the foundation he fulfills his responsibilities and is always being available to the people and giving them the help they need.

The Main Motto of the Ashramam is to render service to the people who were in need of assistance and help them in all possible ways. The Foundation is dedicated to achieving extraordinary improvements in human life. It strives to “Promote the well-being of Humanity” in all aspects.

As a first step towards providing modern treatment mainly to poor patients, Sampath has launched Heal Homecare. Patients are provided free consultation and treatment. Patients requiring emergency treatment availed of the facilities for admission and treatment round the clock.
Blood Donation Camps and Medical Camps were conducted in the village of Muttaram in Telangana.