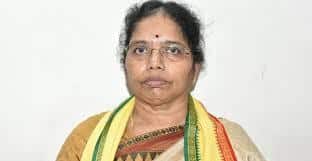 Gali Saraswathi is the MLC(Member of the Legislative Council) of Chittoor constituency, Andhra Pradesh. She was born in 1951 in Velanjeri Village in Tamil Nadu.

She was married to Muddukrishnama Naidu. She had two sons, named Bhanu Prakash Gali and Jagadish Prakash Gali, and a daughter named Lavanya Gali.

Naidu joined politics after a successful career in teaching. He joined the Telugu Desam Party (TDP) where he enjoyed the support of its founder member, N.T. Rama Rao, who founded the party in 1983. He was elected five times to the Andhra Pradesh Legislative Assembly for the TDP from the Puttur constituency.

After some differences with the TDP, he left to join the Indian National Congress party, where he contested a ticket and won the election in 2004. He subsequently resigned from the congress and rejoined the TDP in 2008.

He held a cabinet post in the Ministry for Education, as Minister of Higher Education. When serving as a minister, he held education and forest portfolios.

Naidu officiated over many developments works in the city of Puttur, including the construction of a road-over-bridge at the Santhi theatre level crossing, and the Puttur to Chittoor highway.

Gali Saraswathi, wife of former MLC late Muddukrishnama Naidu. Muddukrishnama died in 2018 after that Saraswathi took the oath as MLC at Legislative Council by Election of TDP in Chittoor Constituency, Andhra Pradesh.

of TDP in Chittoor Constituency