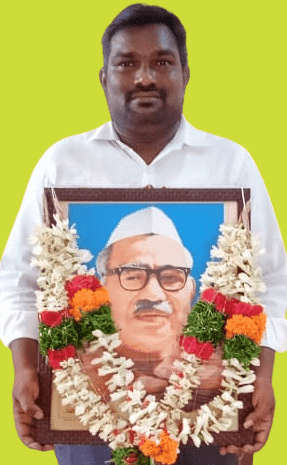 Dunna Koteshwararao is an Indian politician and current Constituency President of Nandigama, NTR district from the Political Party of BSP.

He was born on the 06th of May 1986 in Nandigama to the couple Mr.Sheshaiah and Mrs. Venkatamma.

In 2003, Koteshwararao completed his schooling at MGH, located at Nandigama. He studied Intermediate from KVR junior college and resided at Nandigama in 2005.

In 2018, Koteshwararao obtained LLB from Siddhartha College in Vijayawada.

Koteshwararao is an Advocate by his Profession, he started his career in 2019 he feels that being a lawyer is not merely a vocation. It is a public trust, and each of us has an obligation to give back to our communities.

A career in MRPS:

He has been associated with the MRPS(Madiga Reservation Porata Samiti) since 2008.

Madiga Reservation Porata Samiti or MRPS is a not-for-profit organization formed to demand the categorization of the SC reservation quota in Andhra Pradesh and Telangana states of India to ensure equitable distribution of state allocations for all the constituent Dalit castes, including the Madiga. It was formed under the leadership of Manda Krishna Madiga and Dandu Veeraiah Madiga in 1994 and is currently headed by Manda Krishna Madiga.

He ramped up his service and effort by accepting the position of Mandal Vice President to provide care for the people and the difficulties they face, and he worked in that capacity.

Koteshwararao always had a sense of service from childhood and utmost zeal and enthusiasm to serve and help the people in need. His keen interest and pure intention for serving people led him into Politics.

Koteshwararao officially entered Politics in 2021 and has started his Political Career as a Member of the Bahujan Samaj Party(BSP).

The Bahujan Samaj Party(BSP) is a National Level political party in India that was formed to represent Bahujans, referring to Scheduled Castes, Scheduled Tribes, and Other Backward Classes(OBC), along with religious minorities. The party claims to be inspired by the philosophy of Gautama Buddha, BR.Ambedkar, Mahatma Jyotiba Phule, Narayana Guru, Periyar EV. Ramasamy and Chhatrapati Shahuji Maharaj.

In 2021, He was elected and worked as Constituency President of Nandigama and fulfilled his roles and responsibilities by taking part in each welfare activity.

After receiving the authority as Constituency President, Koteshwararao worked to the best of his ability with the aim of BSP party victory and swore that he would move forward with the aim of the party’s welfare. He extended his heartiest thanks to the party officials for electing him as the Constituency president.