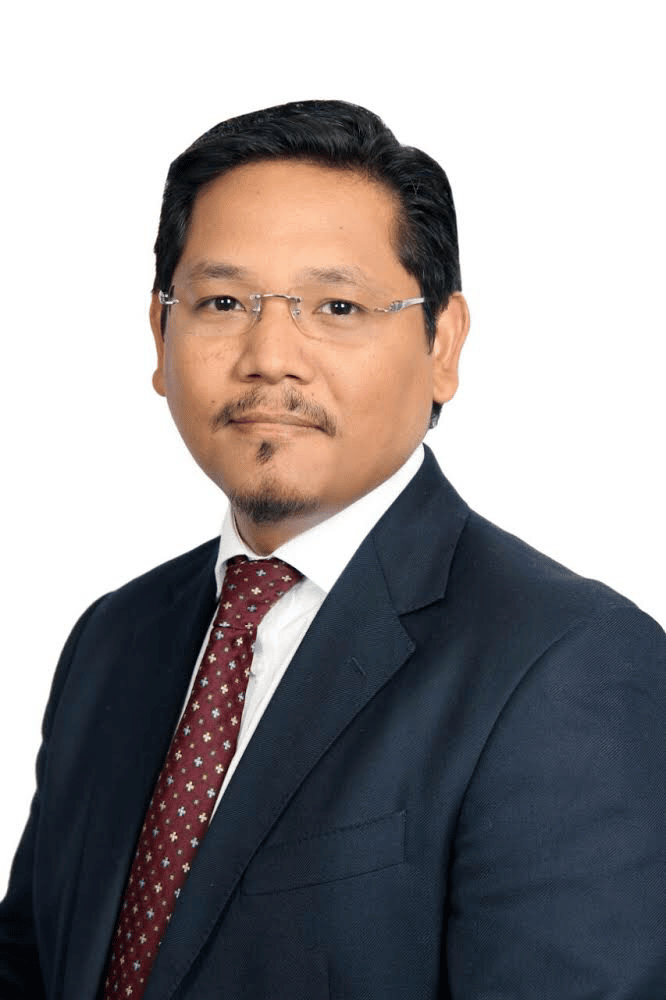 Conrad was brought up in Delhi and was educated at the St. Columba’s School. He received a Bachelor’s degree in Business Administration in entrepreneurial management from Wharton School of the University of Pennsylvania. Sangma has completed his Post Graduation MBA in finance from the Imperial College University of London in 2005.

His siblings, older brother James and younger sister Agatha, are politicians with the NPP. Another sister Christy, however, has remained non-political. Sangma married Mehtab Chandee, a doctor by profession, on 29-May-2009, and has two daughters with her: Amara and the second. Apart from politics, Sangma has been associated with social work, as president of the PA Sangma Foundation, which functions for the betterment in sectors of education and environment, and also runs four colleges in rural Meghalaya. He also currently serves as President of the Meghalaya Cricket Association and Sports Academy.

Sangma started his political career in the late 1990s, as the Campaign Manager for NCP his father P. A. Sangma for the Nationalist Congress Party(NCP). In 2004, He contested his first Assembly election but lost by a short margin of 182 votes. In 2008, He was first elected to the State Assembly along with his brother James, both as NCP members state elections. In 2008, Sangama held several important portfolios in the state cabinet, including the Finance, Power, Tourism, GAD, IT, and presented his first annual budget for Meghalaya within 10 days of debuting as a Minister.

From 2009-2013, Sangma was the Leader of Opposition in the Meghalaya Legislative Assembly. In March 2016, he was elected National President of the National People’s Party (NPP) following his father’s death earlier year. In 2016, he contested from Tura at the by-election to the Member of Lok Sabha, which he won by a record margin of 1.92 lakh votes.

In the 2018 assembly election, his party won 19 seats and formed a coalition govt with other small parties, and Became the Chief Minister of Meghalaya. He also holds the Finance Ministry portfolio in the present government. In 2018, Sangama Contested as an MLA of the Meghalaya assembly election from the South Tura Constituency from the National People Party(NPP). In 2018, Sangama is the Current Chief Minister of Meghalaya.

Conrad Sangma plays the electric guitar and is also a fan of Iron Maiden, the famous heavy metal band. Sometime around the last week of May 2020, a rendition of the Iron Maiden song “Wasted Years” posted to his social media account, and won the internet. In the video, he could be seen with a PRS guitar and a Blackstar amplifier. 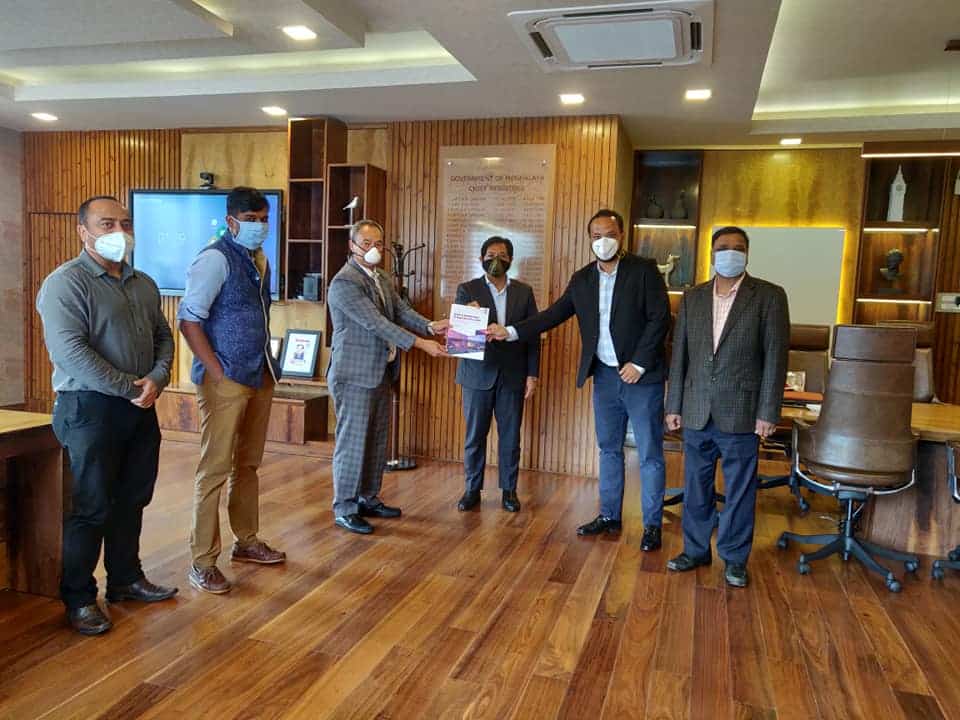 Members of the Working Group of the CM’s Economic Task Force for a Post-COVID Meghalaya presented the Report on ‘Infrastructure & Labour’. I thank the Member Experts for their dedication and effort to prepare this extensive report which will enable us to pave the way forward for our State. 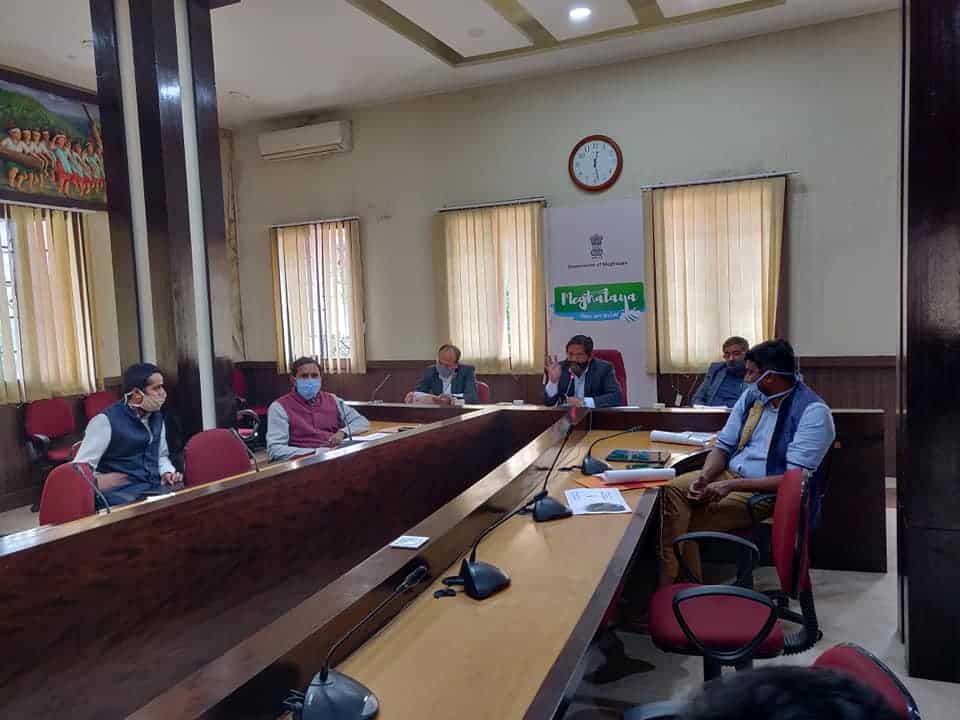 The meeting was held with Hon’ble PHE Minister, DCs, and officials via VC to review the progress of the PMAY-G scheme in Meghalaya. We have a target of 47136 houses and I have directed all concerned to ensure the implementation of the scheme within this financial year. 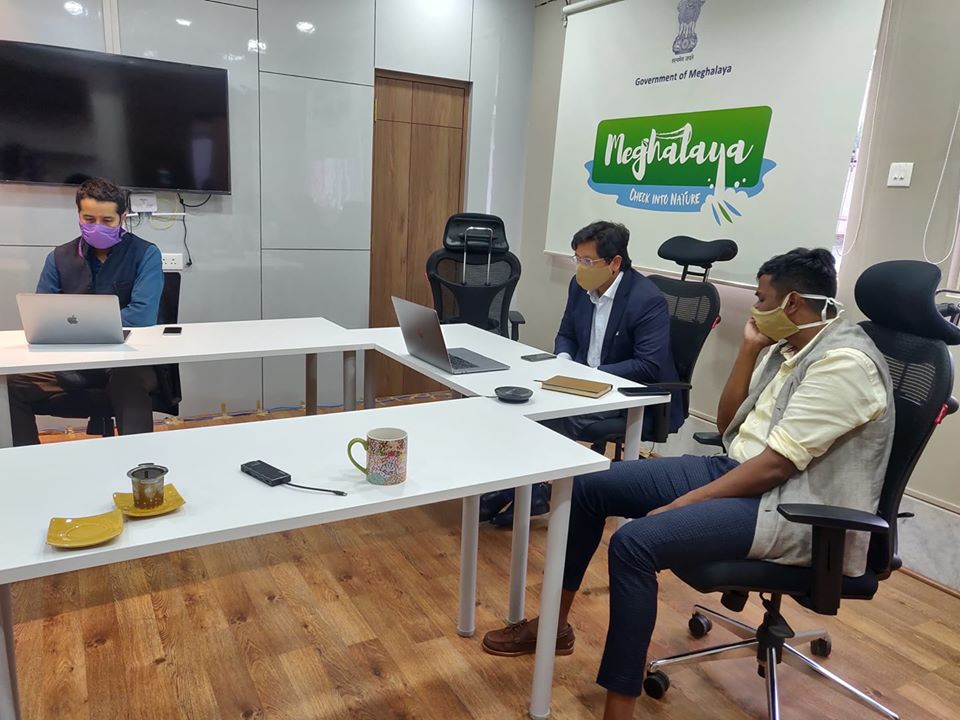 The meeting was held today with officials to finalize the CM’s Dashboard. This monitoring system will keep us updated with development works in our districts and enable us to track the progress of various interventions of the Government. 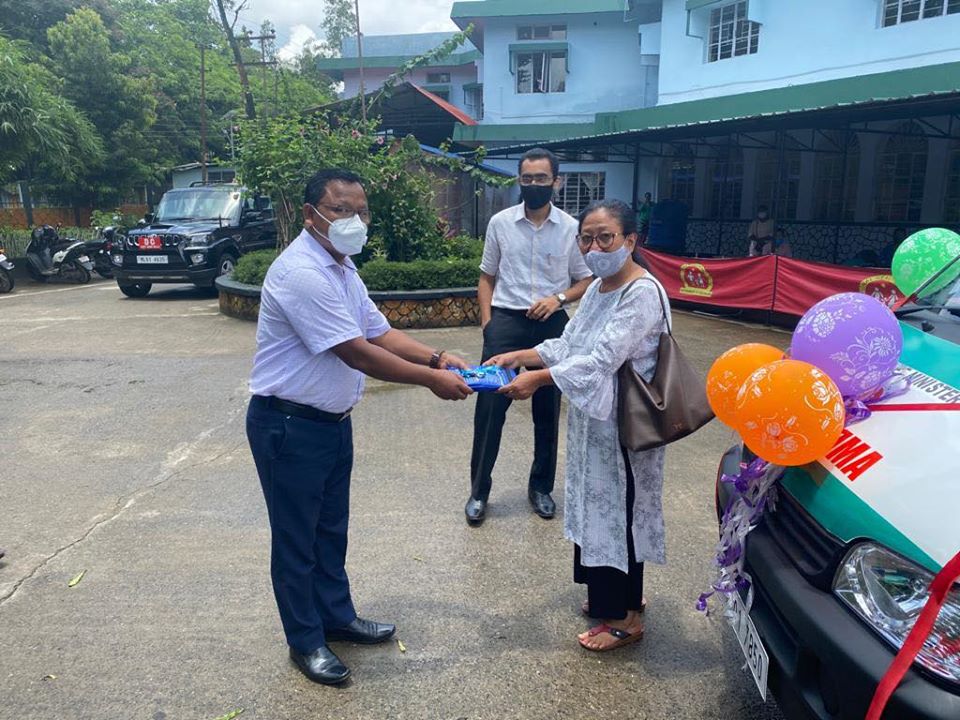 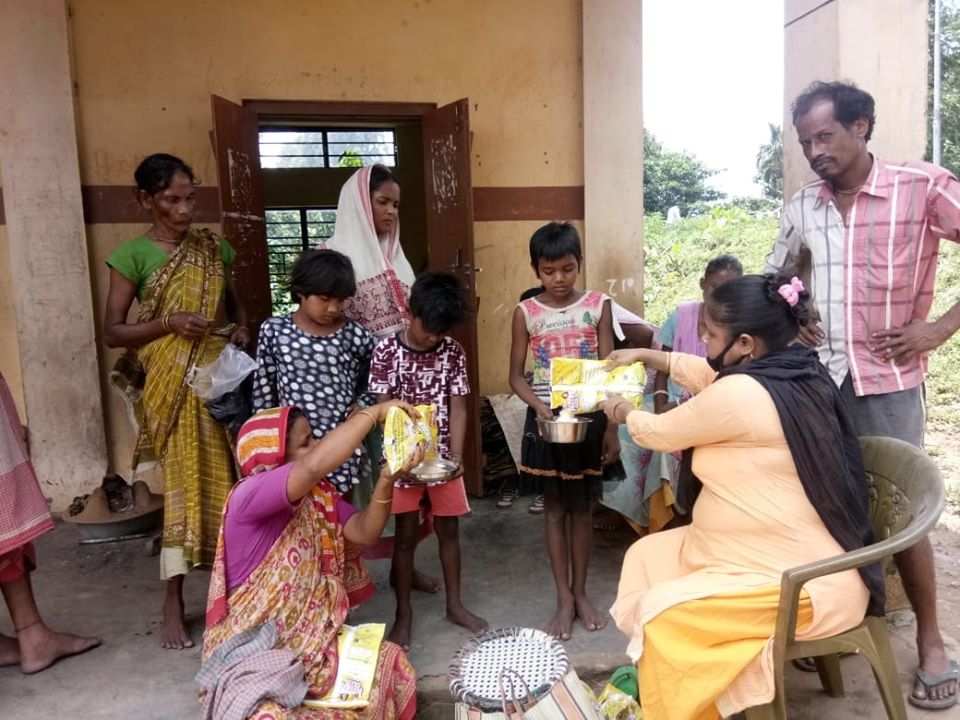 floods Update: We are distributing rations, water, baby food, medical needs to the people affected due to the floods. A total of 30406 families in 175 villages across three blocks are affected due to floods. All departments/officials have been active in assisting people especially BDOs, Doctors & health workers, Anganwari workers, water supply, Sanitation, police, etc. 22 relief camps are set up. SDRF, fire, and emergency services are also helping people. Community members/people are requested to help those in need which they always do keeping in mind Covid-19 protocols. Sadly 4 children and one woman lost their lives in floods. May the departed souls rest in peace. Ex gratia will be paid by the Government as per norms. We appeal to people not to venture out for fishing etc and take care of children. All Anganwari workers are directed to ensure the safety of children. 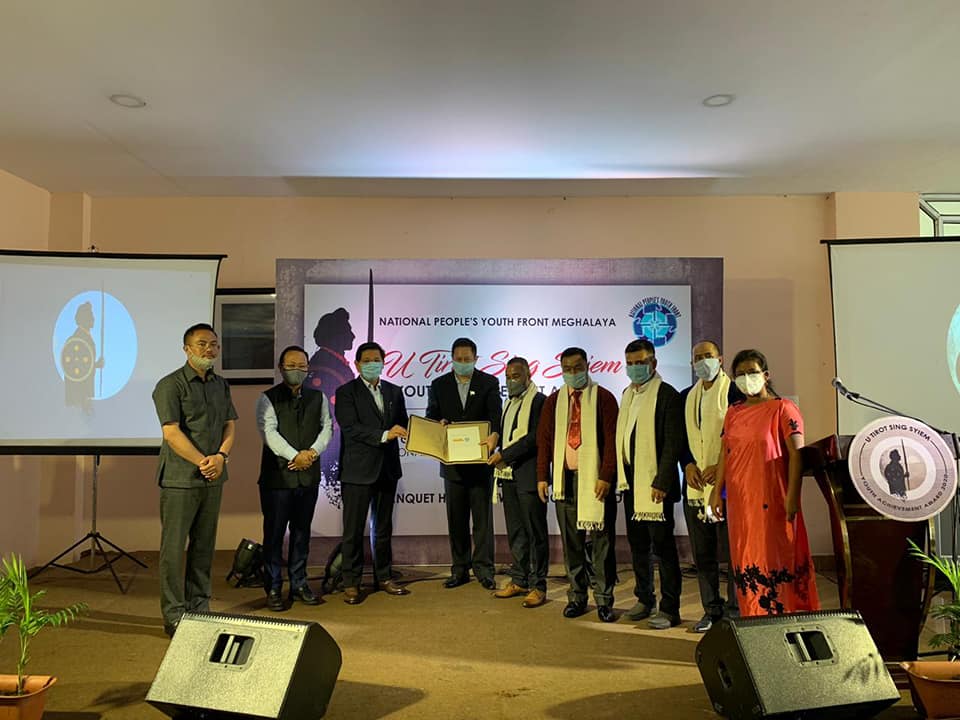 Presented the U Tirot Sing Syiem Youth Achievement Award to Kitboklang Nogphlang, Scarlett Lawriniang, Pranab Pariat, Empower Warbah and Andreas H. Marwein. The programme was organised to mark the 185th Death Anniversary of our freedom fighter, U Tirot Sing Syiem. Appreciate the effort of the National People’s Youth Front (NPYF) for organizing the programme and their recommendation for the Draft Youth Policy. 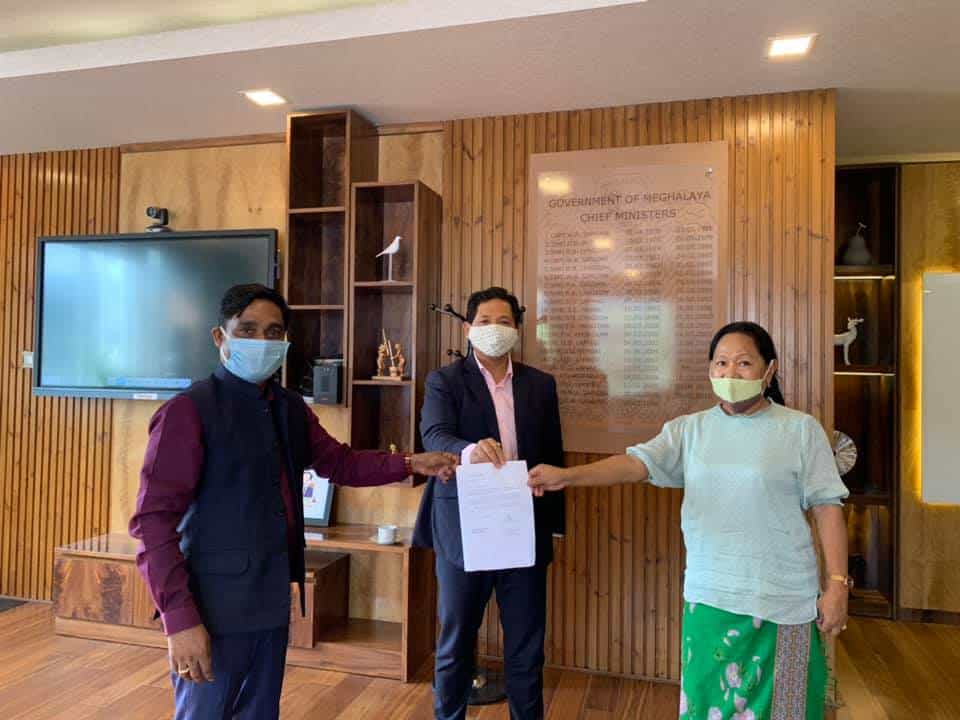 Hon’ble MLA of Phulbari and Selsella called on me to brief about the flood situation in plain belt areas of Garo Hills. Have assured to look into their concerns

Our ANMs are conducting house-to-house pieces of training to effect behavioral change among individuals to help each person manage the COVID 19 pandemic in #Meghalaya. They are using the lockdown period to sensitize every individual in the State to make them understand that they are fully in control of the situation by following the three basic/mandatory protocols of wearing a mask and following respiratory etiquette, maintaining physical distancing and following proper hand hygiene. 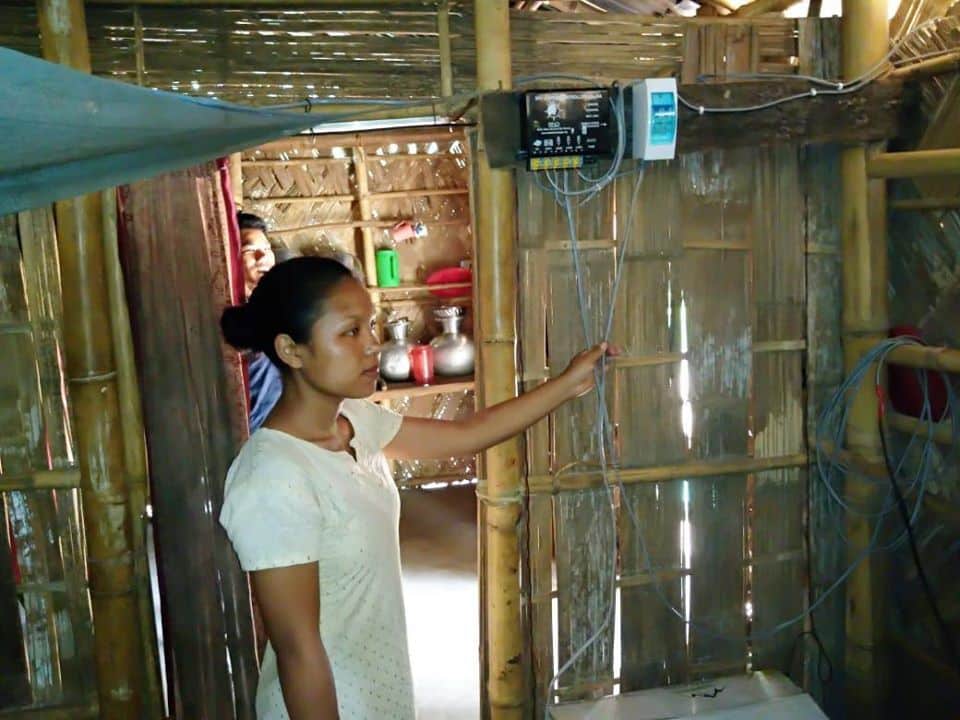 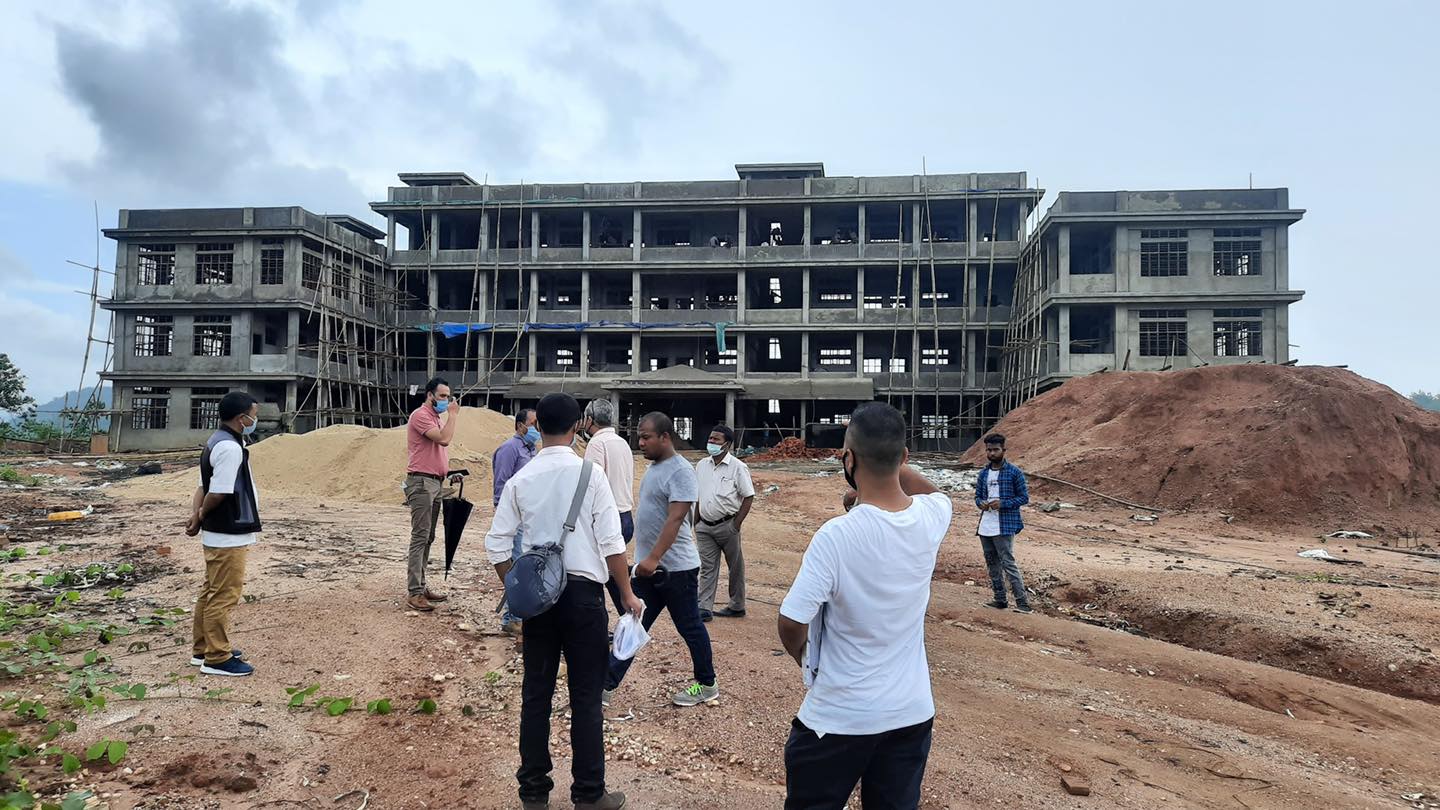 Happy to see the progress of the work in Rongjeng and Patharkhmah Model college in spite of challenges due to COVID -19. We are targeting to complete both within this financial year.

Joined in the Nationalist Congress Party(NCP)

bachelor’s degree in Business Administration in entrepreneurial management from Wharton School of the University of Pennsylvania.

first Assembly election but lost by a short margin of 182 votes.

MBA in finance from the Imperial College University of London

Minister of Finance, Power and Tourism

in the Meghalaya Legislative Assembly representing the NPP from Selsella constituency in the West Garo Hills.

of the National People’s Party (NPP)

from Tura at the by-election a record margin of 1.92 lakh votes.

Sangma became the youngest Finance Minister of the Meghalaya portfolio in the present government.

To balance out health of the people & economy of the State, we are adopting a Micro Containment Strategy in potential high-risk areas.

Behaviour Change training will be imparted in locations with #COVID19 cases to impress on citizens to take precautions for their safety. pic.twitter.com/rr8Bp7b25O

We thank our Hon'ble PM Sh. @narendramodi ji for highlighting the potential of #NorthEast as an organic agriculture producer of the country. The #PalmoleinMission will further empower our farmers in the NE, taking us a step closer towards #AatmaNirbharBharat. https://t.co/0eGsYdWFoH

Government has decided that the #Lockdown will not be extended in the Shillong Agglomeration. However, we appeal to all our citizens to not be complacent but to stay safe and be vigilant by adhering to the protocols and SOPs issued by the Government. pic.twitter.com/X576u0dWOY

In the last 10 days a team of Women Solar Engineers of Garo Hills working with @GHE_Connect have electrified 3 more remote villages, bringing light and happiness to 75 households in South Garo Hills district of #Meghalaya. pic.twitter.com/WQOEPTHmSl

Prayer ceremony at (L) Dr. Donkupar Roy’s residence in Shillong on his first death anniversary. We honour his life and immense contributions to our State. pic.twitter.com/ok6RK4OwgH

One new Ambulance under CM's Relief Fund was handed over to the Medical Officer IC of Sibbari PHC by Shri Satto R Marak, Vice Chairman Health Advisory Board Meghalaya and another one was handed over to Nongalbibra PHC by DC South Garo Hills. pic.twitter.com/TkB7YXaTwd

Meeting with officials from the Health Dept. to review the #Covid_19 situation in #Meghalaya. We are initiating intensive contact tracing in the containment zones and imposing the #lockdown in Shillong starting tomorrow midnight to effectively contain the spread of the virus. pic.twitter.com/TAQl7zzPhz

Members of the Working Group of the CM's Economic Task Force for a Post-#Covid Meghalaya presented the Report on 'Infrastructure & Labour'. I thank the Member Experts for their dedication & effort to prepare the report which will enable us to pave the way forward for our State. pic.twitter.com/44VRMdsUyA

Meeting was held today with officials to finalize the CM's Dashboard. This monitoring system will keep us updated with development works in our districts and enable us to track the progress of various interventions of the Government. pic.twitter.com/4hc3YXvG1J

New ambulances under CM Relief Fund being distributed by MLAs of Jirang and Mawhati in their respective constituencies. Awareness Campaign for COVID 19 were also conducted during the program. pic.twitter.com/sXdT1lHYpG

New ambulances under CM Relief Fund being distributed by MLAs of Jirang and Mawhati in their respective constituencies. Awareness Campaign for COVID 19 were also conducted during the program. pic.twitter.com/sXdT1lHYpG

Warm Birthday greetings to our Union Minister of Human Resource Development, @DrRPNishank ji. Wishing him good health, long life and success in all his endeavours. pic.twitter.com/ky3YsfDRpG

Warm birthday greetings to Sh. @ZoramthangaCM ji, Hon'ble CM of Mizoram. May God grant him good health and long life in the service of our nation. pic.twitter.com/0kS75h1fYo