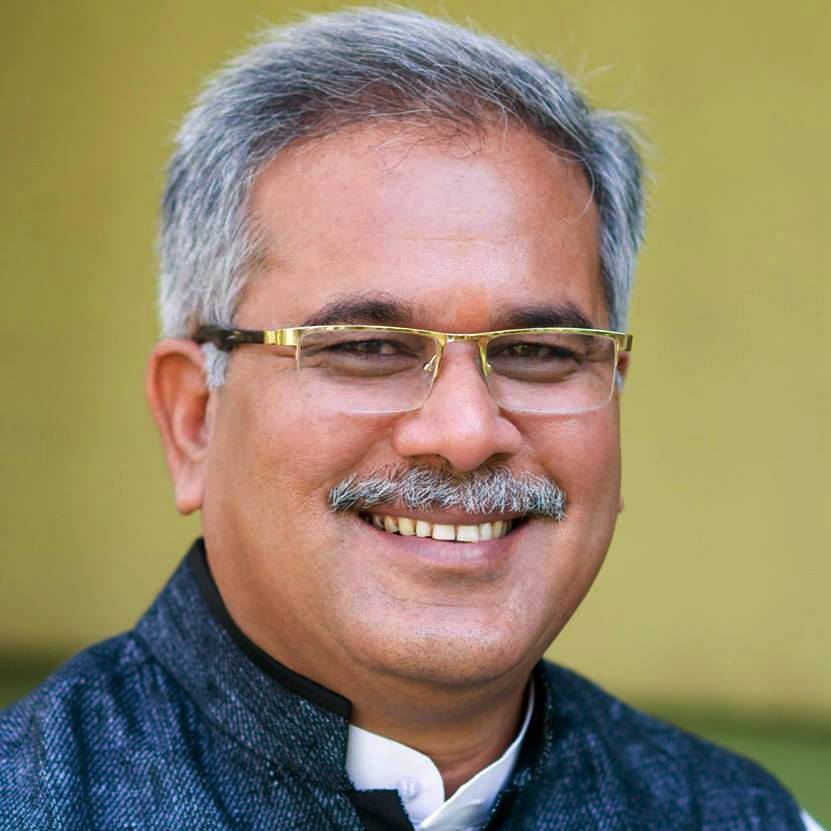 Bhupesh Baghel is the Chief Minister of Chhattisgarh. He was born on 23-08-1961 to Nand Kumar Baghel and Bindehswari Baghel in Patan. He completed Higher Secondary From H.S.School Marar Patan of Durg in 1978.

From 1990-1994, He became the district president of the Indian Youth Congress in Durg district. In 1993, He was elected as Member of Legislative Assembly(MLA) from Patan and was later elected five times from the same seat.

In 1999, He was promoted as Minister of Transport. In 2000, He was appointed as the Chairman of MP State Road Transport Corporation. After the Chattisgarh separated from MP, Baghel became a member of the Chhattisgarh Legislative Assembly(MLA). Baghel became First Minister for Revenue, Public Health Engineering, and relief work.

In 2003, He again successfully contested the assembly election(MLA) from Patan 2003. He became Deputy Leader of Opposition in Chhattisgarh Legislative Assembly. In 2004, He contested Parliamentary elections in 2004 from Durg Lok Sabha seat on Congress ticket but lost.

In 2008, He contested Parliamentary elections in 2004 from Durg Lok Sabha seat on Congress ticket but lost and again contested the Loksabha election in 2009 from Durg seat but lost again.

From 2014-2015, he became a Member of the Public Accounts Committee, CG Government. In 2014, He was elected as Member of the Legislative Assembly(MLA) from Patan. He was appointed as the chief of the Chhattisgarh State Congress Party.

In 2018, He became MLA from Patan assembly seat again. He defeated Motilal Sahu of BJP by 27477 votes. Also, he was elected as Chief Minister of Chhattisgarh. 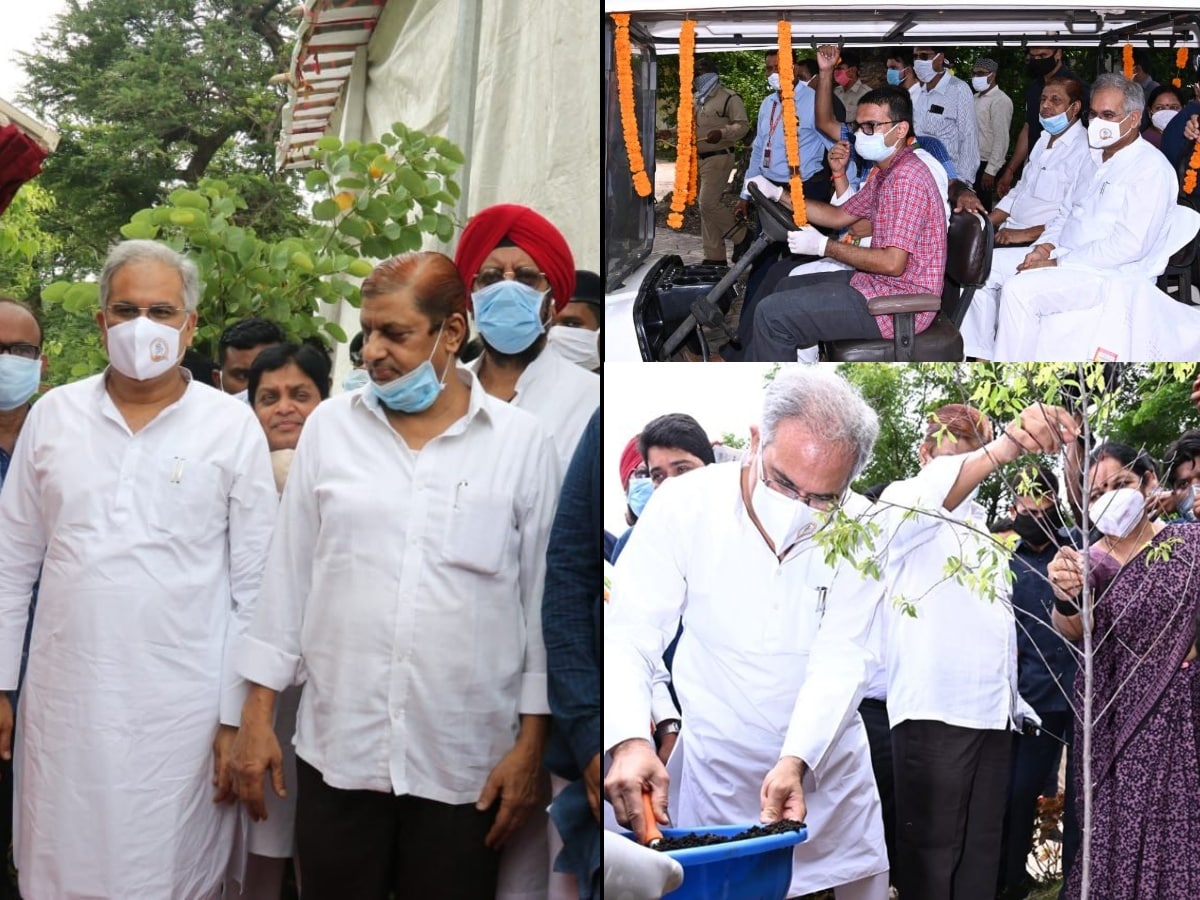 unveiled the ŏksījōna made in 19 acres in the heart site of capital raipur. Of from this ŏksījōna will now be able to enjoy walk and tour with pure air in the city of the city and play an important role in environmental protection. On the occasion of release, I have planted a white sandalwood plant here.

on the expansion works of the fortis-Op Jindal hospital and research center of the industrial city of Chhattisgarh, Raigarh, the foundation of the phase-2 of the fortis-Op Jindal hospital and New facilities will be developed and 85 extra beds will be added by the cost of about 25 crores. The expansion of this hospital will provide better health facilities to people in the area. No one will have to go to other cities to treat many serious diseases including kōviḍa-19. 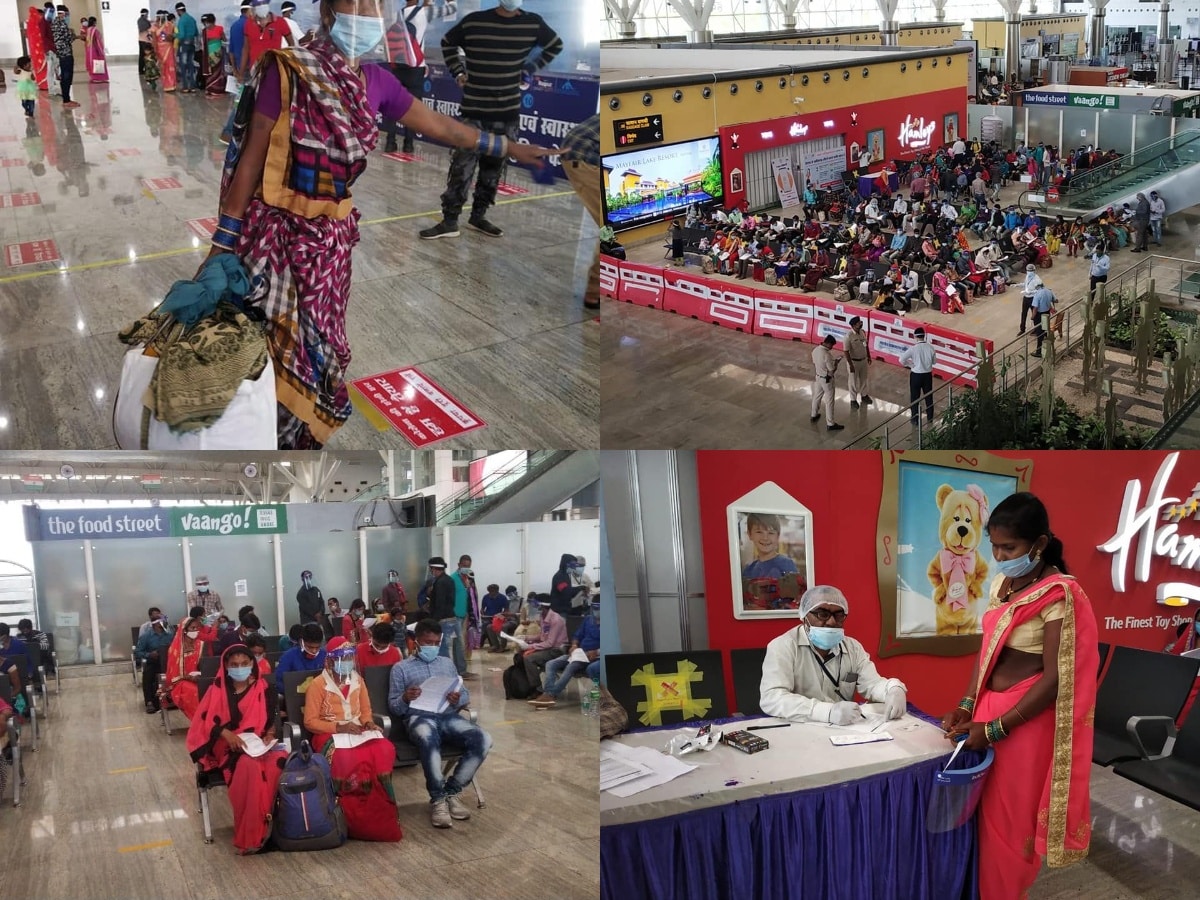 With the help of the former students of Hyderabad law college, the second plane reached Raipur with the workers from Bangalore. On behalf of the government, they were arranged to reach the kvārēṇṭīna center of the home districts. We are thankful to Hyderabad colleagues and colleagues of the voluntary organizations of Chhattisgarh. 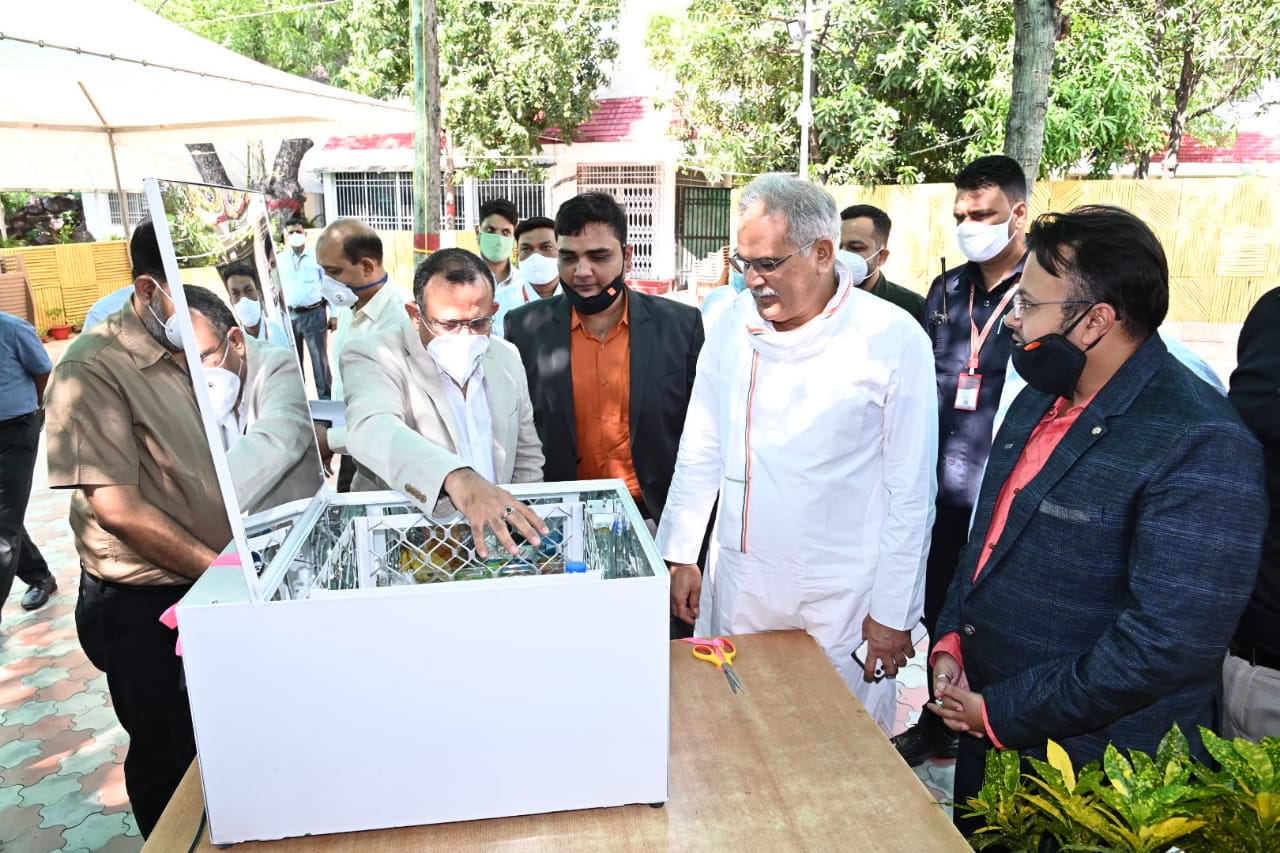 With the help of the former students of Hyderabad law college, the second plane reached Raipur with the workers from Bangalore. On behalf of the government, they were arranged to reach the kvārēṇṭīna center of the home districts. We are thankful to Hyderabad colleagues and colleagues of the voluntary organizations of Chhattisgarh.

The delegation of Chhattisgarh Brahmin Youth Council paid a courtesy visit to the residence office. The members involved in the delegation gave the name of the Nalanda complex to the state government for the sake of their memory in the name of late Mahadev Prasad Pandey. The delegation has handed over a cheque of 21 thousand rupees to help victims of the corona epidemic in the Chief Minister Aid Fund, I express gratitude for this cooperation. 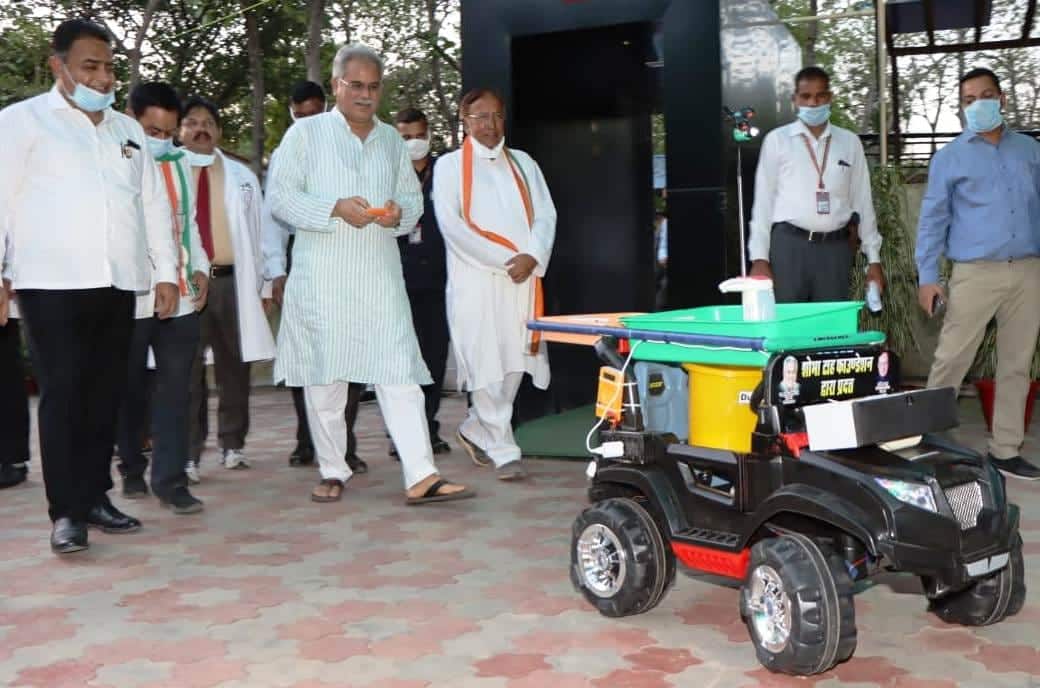 launched a ‘Robot Nurse’ made from the futuristic technology by shobha ṭāha foundation bilaspur at his residence office. This ‘Robot Nurse’ made for better use of protective vision has been handed over to the opportunity to use at the kōviḍa-19 ward of AIIMS RAIPUR.

on the occasion of child safety day, repeat your commitment to give your children a healthy. Lots of love to our kids, God bless.

Visited Raipur’s old pond today afternoon after a clean-cleaning campaign with relentless effort and hard work. Historic old pond Vivekanand Sarovar will be the center of the attraction of the city as the telibandha pond in the coming time. The old pond will be beautifying planned. 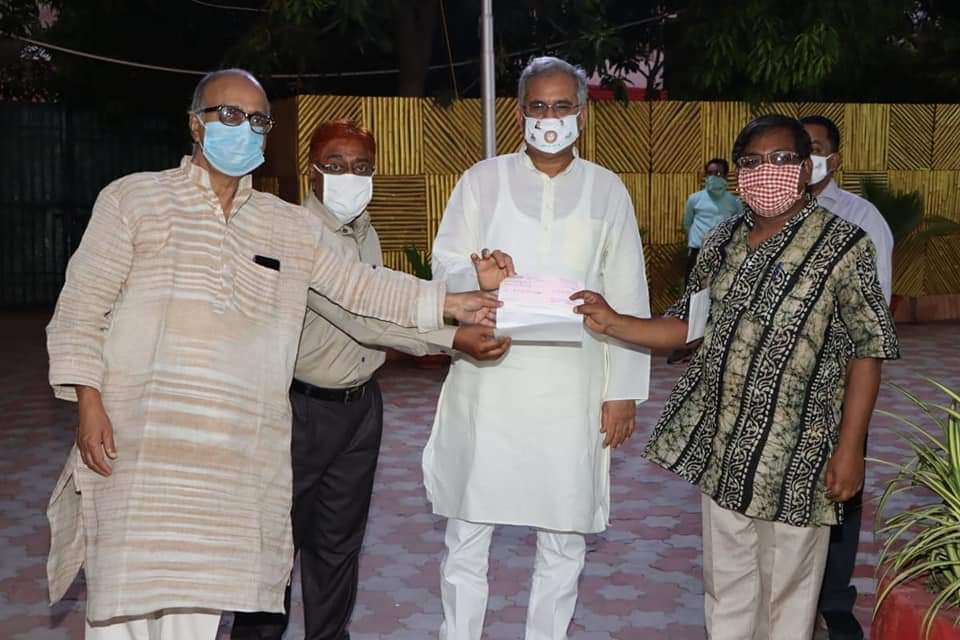 My sincere regards to the CZIEA delegation of Mr. B Sanyal, VP AIIEA; Mr. D.R.Mahaptra, Jt. Sec AIIEA & Gen-Sec CZIIEA; and Mr. V.S.Baghel, Jt. Sec CZIIEA for their generous contribution of Rs 5,00,000 collected from the LIC employees/pensioners in Chhattisgarh towards CM Relief fund. 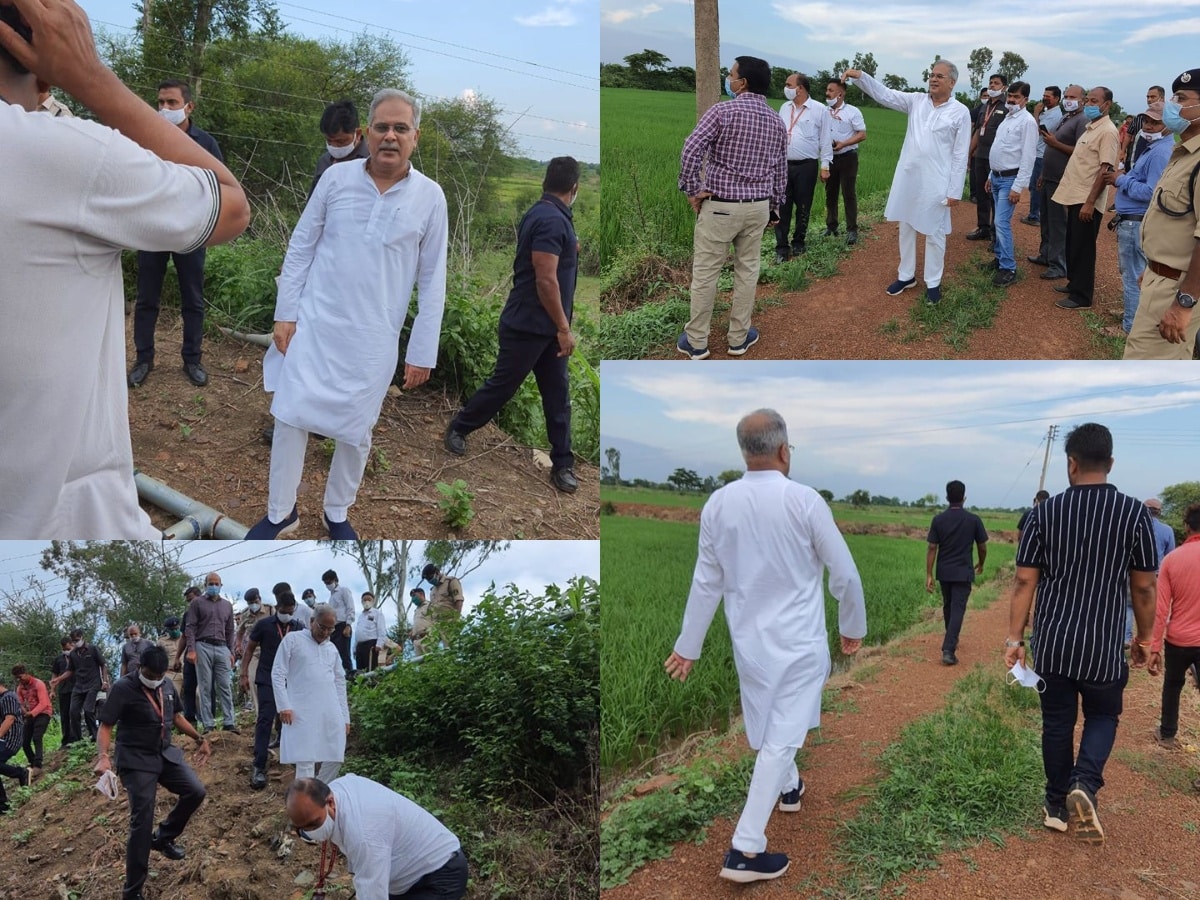 There were a lot of talks with old colleagues and colleagues in the village. Remembered how my family had pioneered to irrigated the village in the 60 s. How the relief work was done during the drought. He had trained the youth of the village to run the tractor, to make it from improving the electrical equipment.

From H.S.School Marar Patan of Durg

of the Indian Youth Congress in Durg district

from Patan seat in Madhya Pradesh

of Opposition in Chhattisgarh Legislative Assembly.