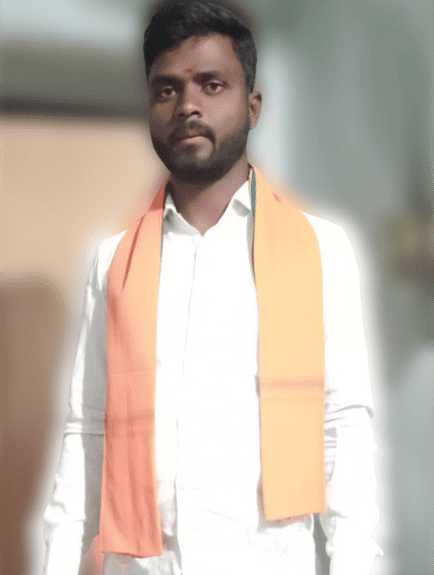 Bayana Vijay Kumar is an Indian Politician belonging to the BJP. He is the most prominent leader of the Bharatiya Janata Party(BJP) with plenty of experience in the Political field. He is the current Village Youth President from Settipalle Kalan, Yeldurthy Mandal.

On 1st January 1996, Vijay Kumar was born to the couple Balesh and Shyamala in Settipalle Kalan village.

In 2012, He obtained his Board of Secondary Education at Zilla Parishad high school, located at Dandakosanpalli. In 2014, He completed his Intermediate at Siddharth junior college which resided at Medak.

Vijay Kumar always had the utmost zeal and enthusiasm to serve and help the people in need. As a young boy, he offered his services voluntarily to the public. Vijay Kumar started his Political Journey with the Indian National Congress(INC) in 2014 he become an Active Leader by contributing to each party’s activity and fighting against injustice in the same year he was elected and served as Village Youth President of Settipalle Kalan, Yeldurthy Mandal.

In 2019, Vijay Kumar switched from the Congress Party to the Bharatiya Janata Party(BJP).

Later on, in 2020, he was chosen as the Village Youth President by the Settipalle Kalan villagers who recognized Vijay’s ability to support the people in all possible ways at any given time as a social worker and party worker.

BJP leaders and activists across the state have taken the initiative, demanding that the problems of farmers in Telangana be resolved on the orders of the President of the BJP party Bandi Sanjay. They demanded the purchase of grain on a war footing, the payment of support prices for tainted and discolored grain, an end to harassment of farmers in the name of depreciation, and the implementation of debt forgiveness.

-Vijay Kumar rendered his service to the Vijayawada people even during the corona which terrorized the whole country.

-Vijay Kumar put effort even during the Covid second wave.

at Siddharth junior college which resided at Medak