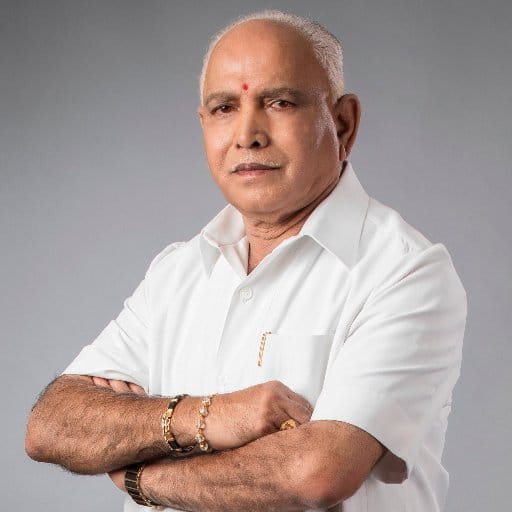 B. S. Yediyurappa is an Indian politician serving as the 19th and current Chief Minister of Karnataka. He was born on 27-02-1943 to Siddalingappa and Puttathayamma in a village called Bookanakere in K.R.Pet taluk of Mandya District. He was named after the presiding deity of a Shaivite temple built by the great saint Siddalingeshwara at Yediyur in the Tumkuru District. His mother died when he was four years old. He completed his Pre-University College education from Government college, Mandya (Mysore University), 1960-1961. He completed his Graduation B.A from Banglore University. He belongs to the Banajiga sub-sect of the Lingayat community.

In 1965, he was appointed as a first-division clerk in the social welfare department but he quit the job and moved on to Shikaripura where he joined as a clerk at Veerabhadra Shastri’s Shankara rice mill. In 1967, Yediyurappa married Mythradevi, daughter of the rice mill owner. He later set up a hardware shop in Shimoga. Yediyurappa has two sons, Raghavendra, B.Y Vijayendra, and three daughters, Arunadevi, Padmavati, and Umadevi. In 2004, his wife died after falling into a sump while drawing water. In 2007, he changed the spelling of his name to Yeddyurappa from the earlier Yediyurappa following the advice of his astrologers to change back again to Yediyurappa before the oath-taking ceremony on 26 July 2019. He is a proud follower of Basavanna.

Having been associated with the Rashtriya Swayamsevak Sangh from his college days, Yediyurappa’s public service began when he was appointed as Karyavaha(Secretary) of the Sangh’s Shikaripur unit in 1970. Yediyurappa started his political career with the Bharatiya Jana Sangh. In 1972, he was elected to the Shikaripura Town Municipality and was also appointed as the President of the Taluk unit of the Jana Sangh.

In 1975, he was elected President of the Town Municipality of Shikaripura. He was imprisoned during the Emergency in India and lodged in the Bellary and Shimoga jails. Yeddyurappa joined the BJP. In 1980, he was appointed President of the Shikaripura taluk unit of the BJP and later went on to become the President of BJP’s Shimoga district unit in 1985. In 1988, he became the State President of the BJP in Karnataka. He was first elected to the lower house of the Karnataka Legislature in 1983 and has since represented the Shikaripura constituency six times. He has been a member of the Seventh, Eighth, Ninth, Tenth, Twelfth, and Thirteenth Legislative Assemblies(lower house) of Karnataka. Following the 1994 state assembly elections, he became the Leader of Opposition in the Karnataka Legislative Assembly. In 1999, he lost the elections but was nominated by the BJP to become a Member of the Legislative Council (upper house) of Karnataka. Again, he was re-elected in 2004 and became the Leader of Opposition in the Karnataka Legislative Assembly during the chief ministership of Dharam Singh.

In Karnataka’s 2008 Assembly elections, Yediyurappa contested from Shikaripura against former Chief Minister S. Bangarappa of the Samajwadi Party. The Indian National Congress and JD(S) backed Bangarappa, but despite this, Yediyurappa won the seat by a margin of more than 45,000 votes. He also led the BJP to a historic victory in the state and Karnataka became the gateway for the BJP in south India. He took the oath of office as Chief Minister on 30 May 2008.

However, the Karnataka Lokayukta investigating the illegal mining case submitted its report indicting Yediyurappa for illegally profiteering from land deals in Bangalore and Shimoga, and also in connection with the illegal iron ore export scam in Bellary, Tumkur, and Chitradurga districts of Karnataka. Following much pressure from the BJP central leadership, he announced his decision to quit. Finally, he resigned on 31 July 2011.

He resigned from his position as Member of Legislative Assembly and primary membership of the Bharatiya Janata Party on 30 November 2012 and formally launched the Karnataka Janata Paksha. It is told that his former colleague and senior BJP leader Anna Vinayachandra was the key person who led the movement at the national level to demand expulsion from the party which led to his resignation. Although the party and its name were registered in April 2011, Yediyurappa launched it in 2012. He got elected as an MLA from Shikaripura Constituency (Shimoga district) in May 2013.

In November 2013, it was announced that he was considering an unconditional return to the BJP. On 2 January 2014, he announced a merger with BJP ahead of the 2014 Lok Sabha elections. He won from the Shimoga seat of Karnataka in the 2014 Indian general election by a margin of 363,305 votes.

Owing to alleged ill-treatment meted out to Yediyurappa by the BJP High Command, he left BJP and formed his party, the Karnataka Janata Paksha. However, in 2014 he merged his party with the BJP and was subsequently elected to the 16th Lok Sabha from the Shimoga constituency, which he quit after being elected to the Karnataka Legislative Assembly in May 2018.

In 2016, BJP re-appointed him as the President of the Karnataka state BJP unit. He was BJP’s CM candidate in the 2018 Karnataka Legislative Assembly election. But the party managed to win only 104 seats, 9 short of a simple majority.

During the aftermath of the 2018 Karnataka Legislative assembly elections, Yediyurappa was invited to form the government and become the Chief Minister by the Governor citing that his party was the single largest in the house with 104 seats (8 short of a majority in the assembly).

Police residential houses, traffic police stations, training schools were inaugurated online. My government is committed to providing basic facilities to the police department. 11,000 houses are said that 11,000 houses should be completed in the present year under the police house 2020 scheme. 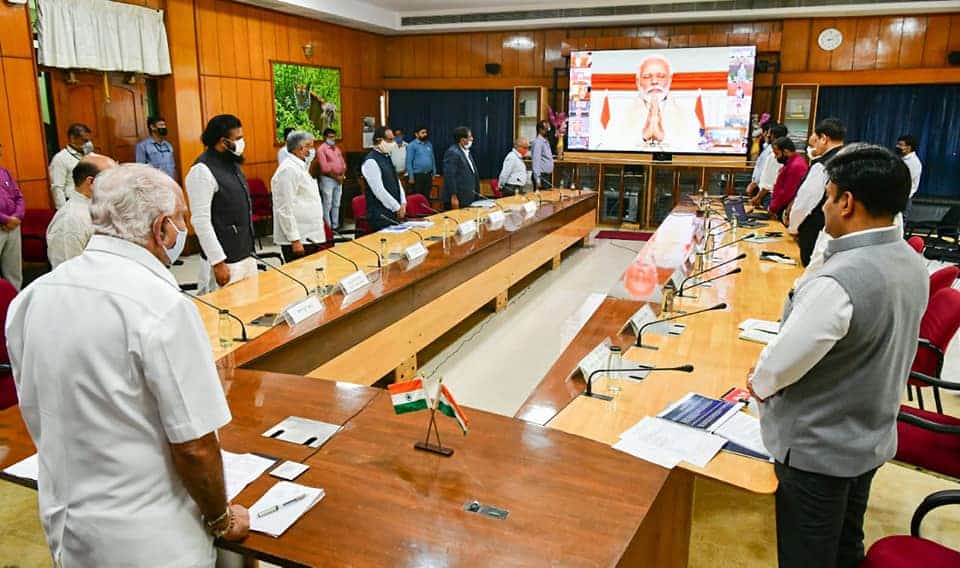 Prime Minister Shri Narendra Modi participated in a video conference with the chief minister of various states today regarding the temple conditions and the next way. First paid tribute to the brave soldiers were martyred in the Ladakh area by 2 minutes of silence. 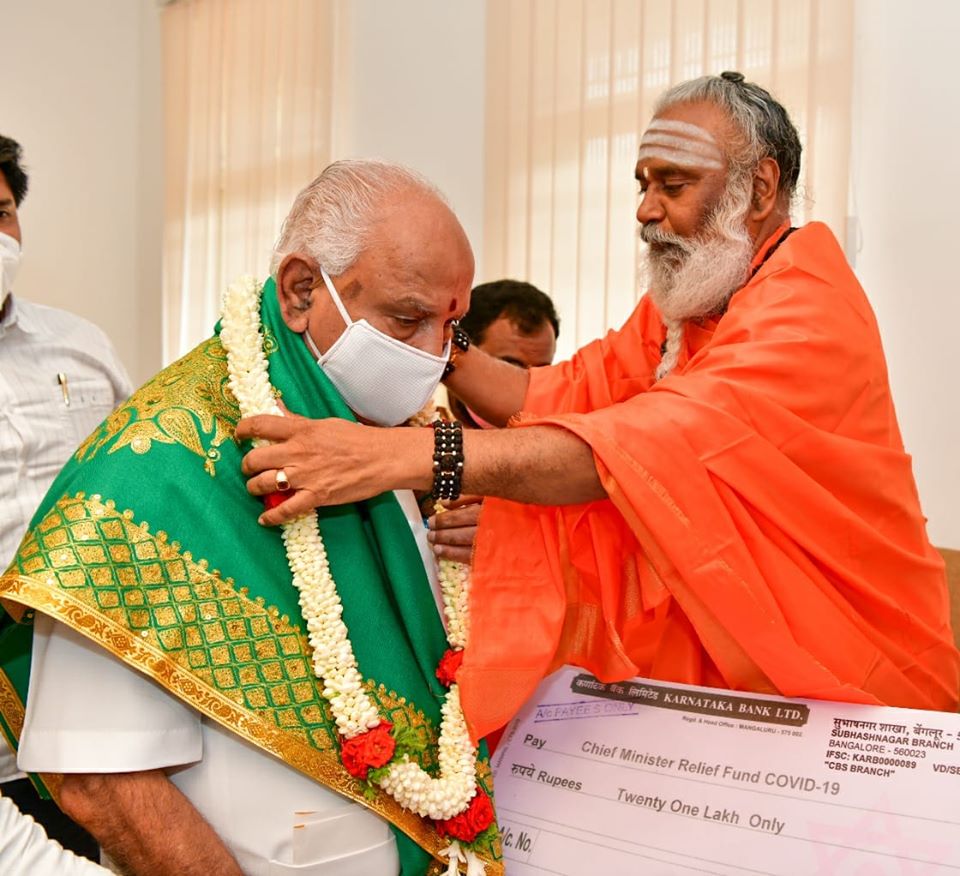 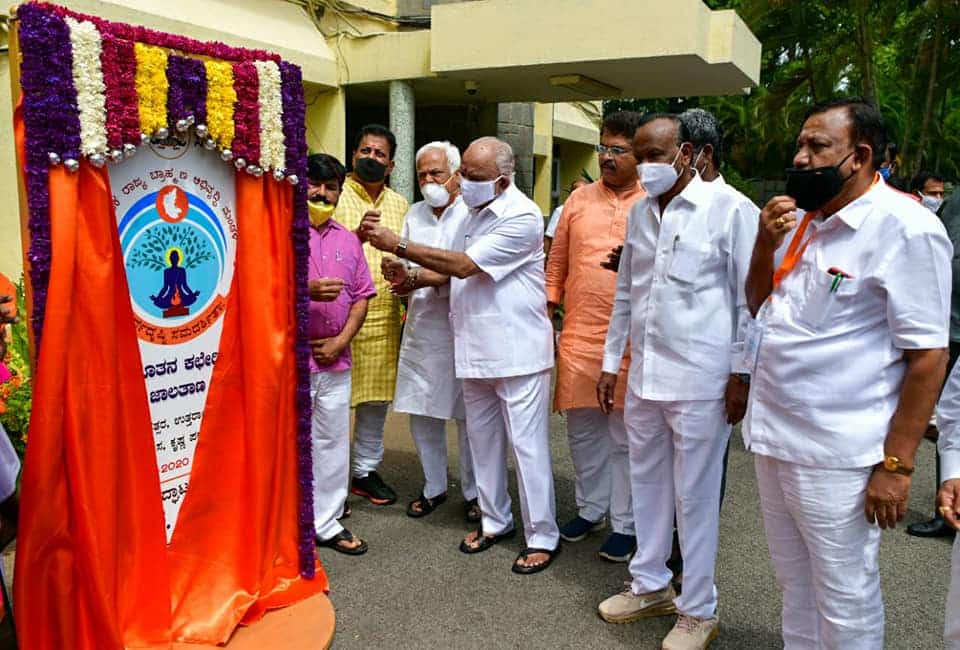 Karnataka State Brahmin Development Board’s new office launch and the website were inaugurated. The contribution of the brahmin community in the history of the country is remarkable 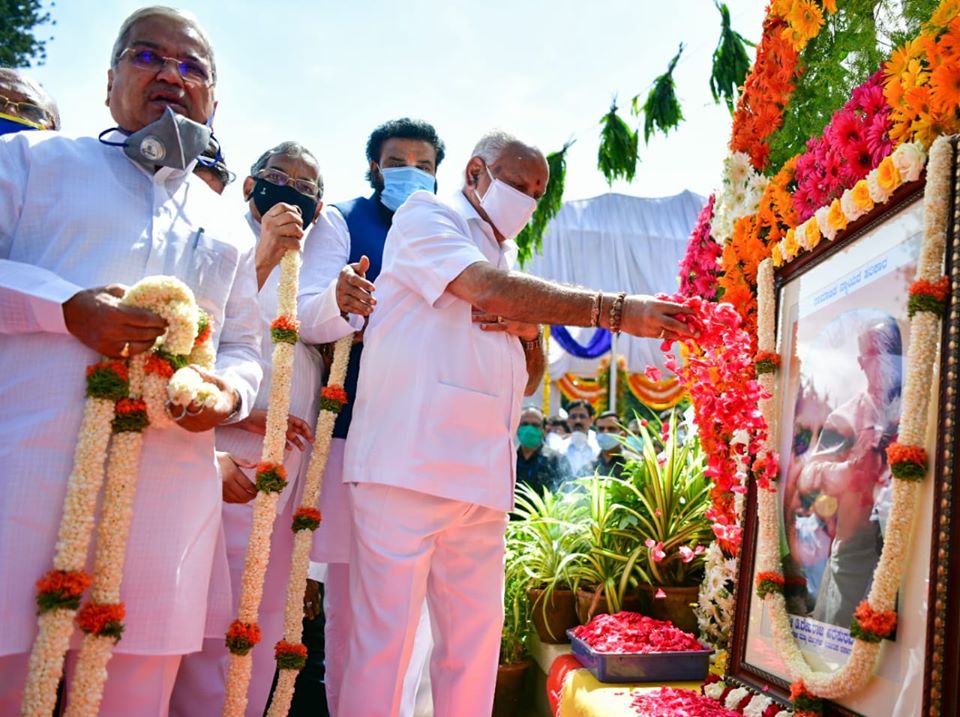 On the occasion of his 38th death anniversary of former Chief Minister late Shri Devaraj raja, we visited the statue of the late class welfare department. Senior Ministers and officials were present. 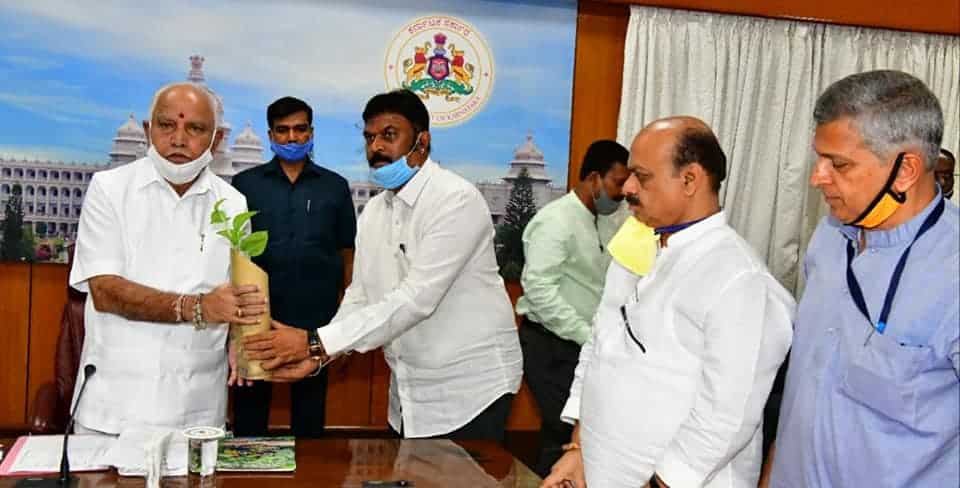 Participated in the program organized by forest, environment and lifestyle today on the occasion of world environment day. Environment Balance is possible only when there is a variety of life. The environment pollution was slowly reduced as the lock 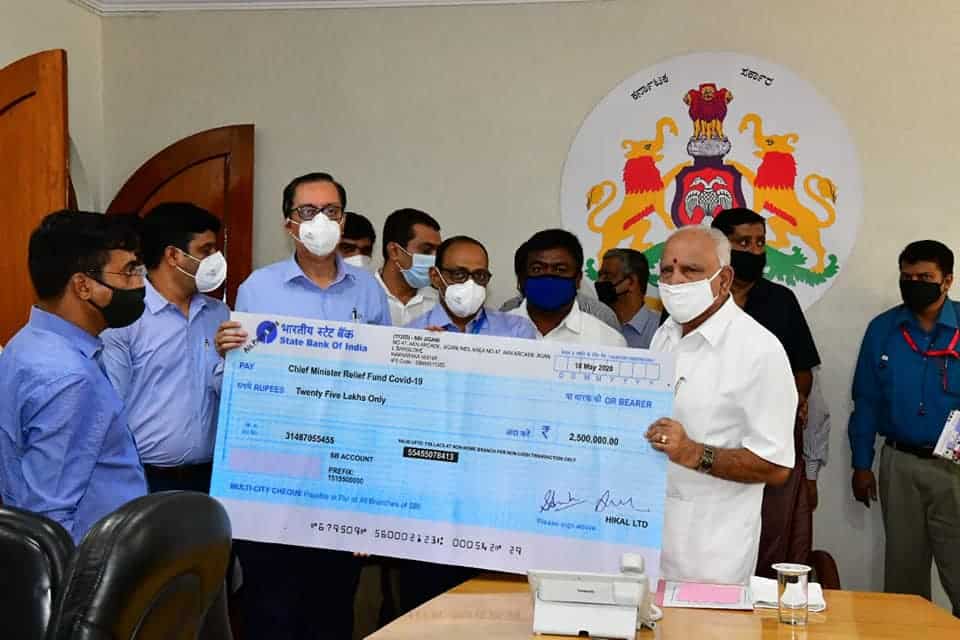 Base Education and base p for Chief Minister’s temple 19 Relief Fund. You are the one who is the one who is the one Rs. 11,11,111 on behalf of college employees. Donation of donation, Rs. 25 lakh from hill stone limited. Rs. 2 lakh on behalf of maṅgalikā organization. Received the check of their donation. During the crisis 19 crisis, the liberal attitude of the public and community-organizations who join hands with the government is appreciated.

of the Sangh’s Shikaripur unit

of the Taluk unit of the Bharatiya Jana Sangh.

of the BJP in Karnataka.

of the Lok Sabha from  Shimoga Constituency

of BJP  from Karnataka

Many industry-friendly reforms have been undertaken in Karnataka and we are committed to doing, even more, to make it even easier to do business in the state. Met Consuls from different nations stationed at Bengaluru and invited them to invest in the state.@narendramodi pic.twitter.com/1A5RQCgFbY