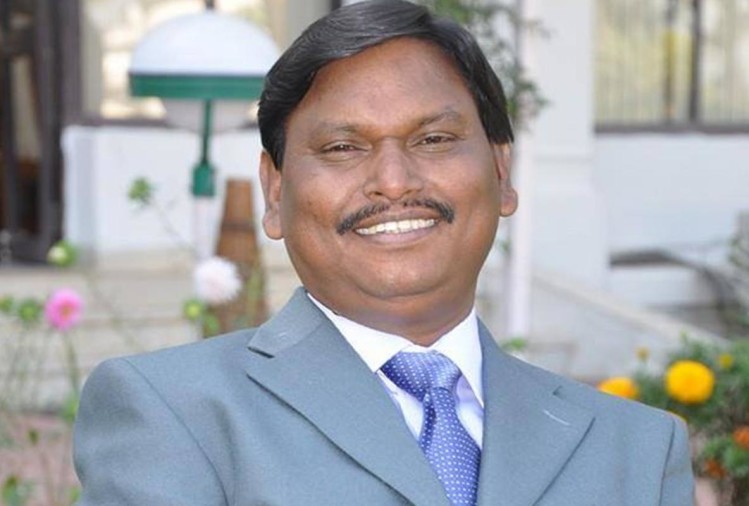 Arjun Munda is the Minister of Tribal Affairs in the Second Modi Ministry. He was born on 3rd May 1968 in Khrangajhar, Jamshedpur to a religious family of Late Ganesh and Saira Munda.

Arjun Munda is an Indian politician. He was also Chief Minister of the Indian state of Jharkhand. He has also served as a member of parliament having been elected to the 15th Lok Sabha from the Jamshedpur constituency in the 2009 parliamentary elections.

BJP’s central leadership also appointed him a National General Secretary of the party recognizing his strong credentials as a popular mass leader and his significant contributions in strengthening the party in his state.

He lost his den to the JMM’s Dashrath Gagrai by 11,966 votes in Kharasawan for 14 years in a 2014 state assembly election.

Arjun Munda entered the political fray as a JMM candidate and eventually gravitated towards the BJP ideology. An ardent advocate for tribal rights, he was elected the Welfare Minister, Govt. of Jharkhand. He also served as the CM of Jharkhand for three terms. In 2019, Lok Sabha elections he won the Kunti seat by a margin of 1400 votes. He was appointed as Minister of tribal affairs.

He has completed his high school education in the Jamshedpur area, He has Graduated from Ranchi University and went on to earn a PG Diploma Bachelor in Professional Program (BPP) in Social Sciences from Indira Gandhi National Open University, Ignou.

He started his political career in his teens during the early 1980s when he joined the Jharkhand movement spearheaded by Jharkhand Mukti Morcha (JMM) which sought to create a separate state for tribals from the southern regions of Bihar.

A hardcore believer in the welfare of indigenous people of his region he felt passionate about the issue and took an active part in the movement. Soon his political influence grew due to his inclusive philosophy. Arjun Munda was elected to the MLA Bihar Legislative Assembly from the Kharsawan constituency(1st Term) in 1995 on a JMM ticket.

Arjun Munda joined the Bharatiya Janata Party(BJP). He was elected as a 2nd Term MLA to the Bihar Assembly in 2000 elections contesting on a BJP ticket from his old constituency of Kharsawan that he had been nurturing for many years.

After Jharkhand’s formation, he was elected to the Jharkhand Assembly from the Kharsawan constituency, 3rd term in 2005, and again in the 2011 bye-election after assuming responsibility as the CM in September 2010. He was elected Chief Minister, Govt. of Jharkhand for two terms (2003-2005). and (2005-2006 ).

When the NDA government came to power in 1999 under the leadership of Atal Bihari Vajpayee it kept its promise and created Jharkhand along with Uttarakhand and Chhattisgarh as three new States of the Indian Union. Munda became the Tribal Welfare Minister in the 1st Babulal Marandi-led NDA coalition government of Jharkhand which was carved out from Bihar on 15 November 2000.

As a welfare minister, he crafted many policies and programs to ameliorate a lot of the poor and downtrodden. His vision, his work ethic, and his performance matrix soon catapulted him to the top leadership grade and his popularity and support base soared meteorically. His inclusive philosophy and his commitment to Jharkhand’s high growth and development put him in the CM’s chair in 2003 at the young age of 35 when he was chosen as the consensus candidate to lead the State in the aftermath of Babulal Marandi’s divisive domicile policy.

From 2010-2013, Arjun Munda served as a Chief Minister of Jharkhand,3rd Term from BJP. He was the Member of Parliament, Lok Sabha from Khunti Constituency by a margin of 1400 votes, Jharkhand, India.

On 30 May 2019, Arjun Munda is appointed as President of the Archery Association of India.

Arjuna Munde took the oath as Union Minister in Narendra Modi’s second cabinet on 30 May 2019 and became the Minister of Tribal Affairs.

Arjun Munda defused the tension that was created due to the “Domicile movement” in 2001–2002 and insisted that every citizen of India had the fundamental right granted by the Indian Constitution to live and work in any part of the country.

During his tenure, Jharkhand got the 1st Lokayukta and the State successfully conducted the 34th National Games in 2011.

A 32-year-long jinx was broken when Jharkhand scripted history by conducting panchayat elections and empowered PRIs for participatory governance.

His government introduced an e-tender system in government contracts to bring transparency and efficiency and to provide equal opportunity in the procurement process.

He also took initiatives for setting up of new power plants with a view to making Jharkhand a power surplus state.

He introduced some of the famous welfare schemes and programs that were later emulated by other Indian states.

Kanyadan Yojana: To provide assistance in solemnizing marriages of girls from underprivileged classes.
Mukhya Mantri Ladli Laxmi Yojana: To promote the welfare of the girl child born to a BPL family and APL families having an annual income of less than Rs. 72,000, her education, and safe motherhood.
Aapka-CM: The Grievance Management System was established to enable people to communicate directly with their CM and voice their grievances to the State leadership for prompt consideration and redressal.
Mukhya Mantri Dal Bhat Yojna: To provide wholesome food and nutrition to the poorest sections of society. Under this scheme, BPL families get dal, bhat, and sabji for Rs 5 at railway stations, bus stands, hospitals, and public places.
Free Laptop/Tablet: To prepare the youth to face the challenges of the 21st century, tablets were to be given to students passing matriculation examinations under the Yuwa Kaushal Vikas Scheme launched in 2013.

An avid golfer, Munda is also interested in promoting archery at national and international levels. He plays flute and almost all tribal musical instruments widely used in the area.

A multi-linguist, he speaks English, Hindi, Bengali, Odia, and several tribal languages and dialects of the region like Santhali, Mundari, Ho, Oraon, and others.

Munda Alleviated the tensions bought on by the “Domicile movement” in 2002. He contended that every citizen has a constitutional right to live and work freely in any part of the Indian state. 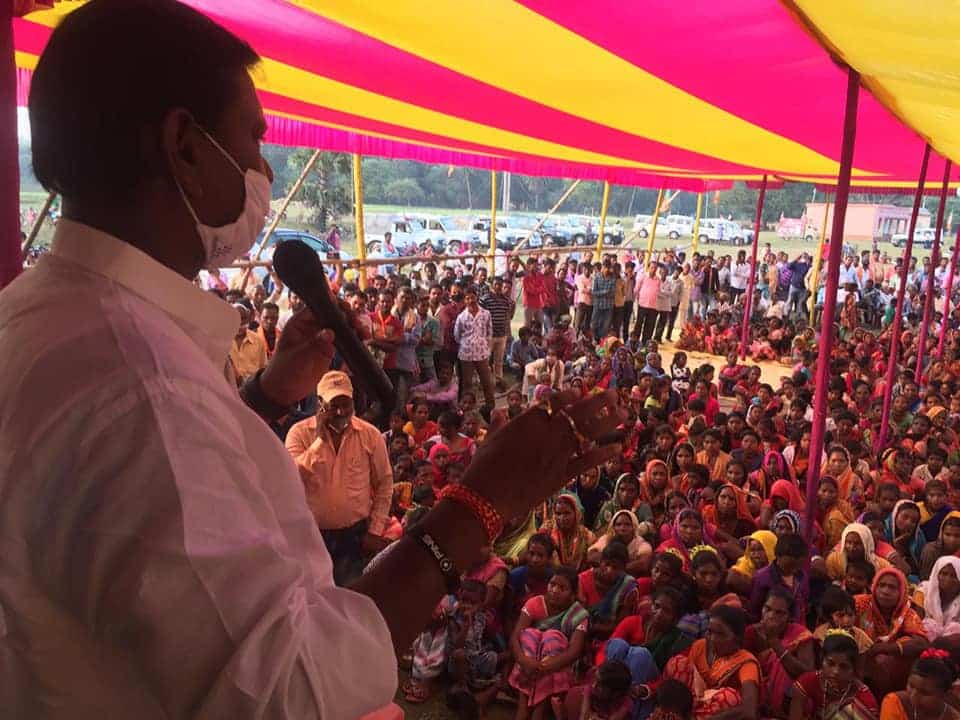 Got the opportunity to drink tea with the workers of Jamtara while going to Dumka.

In support of the BJP candidate for Bermo assembly by-election, the tribal majority was held in Simaldih village of Sudur Araldih Panchayat.

The central government is working fast on how the tribals get their rights under the right law in the country. In support of the BJP candidate for Bermo assembly by-election, today did public relations in Badkitand of Adivasi Bahul Champi Panchayat. 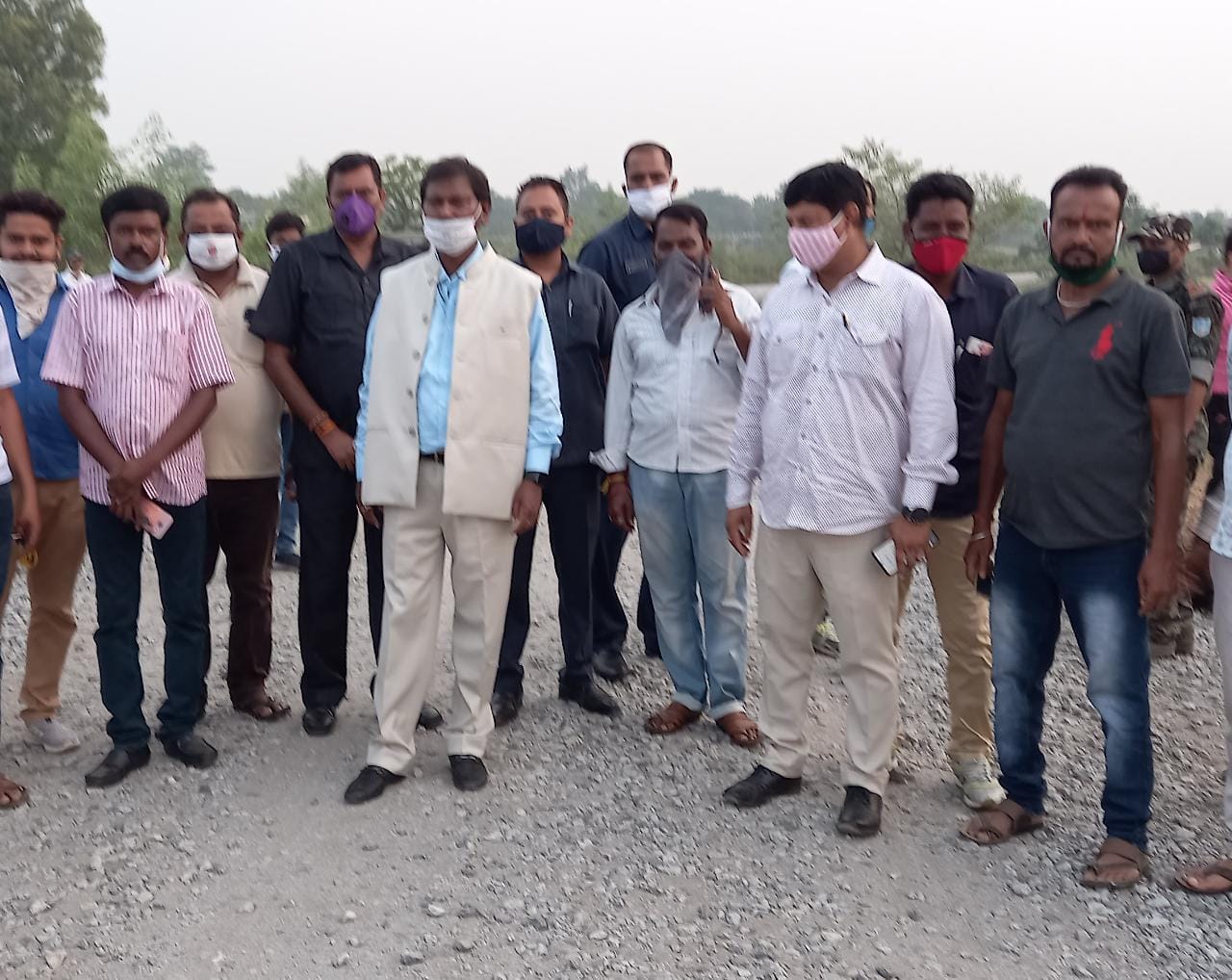 In 2012, I approved the construction of Kharsawan-Radgaon 29 km road in my Chief Ministerial period to connect Kharsawan to NH33. But, unfortunately, this road is still incomplete. Today I reviewed this semi-built road. 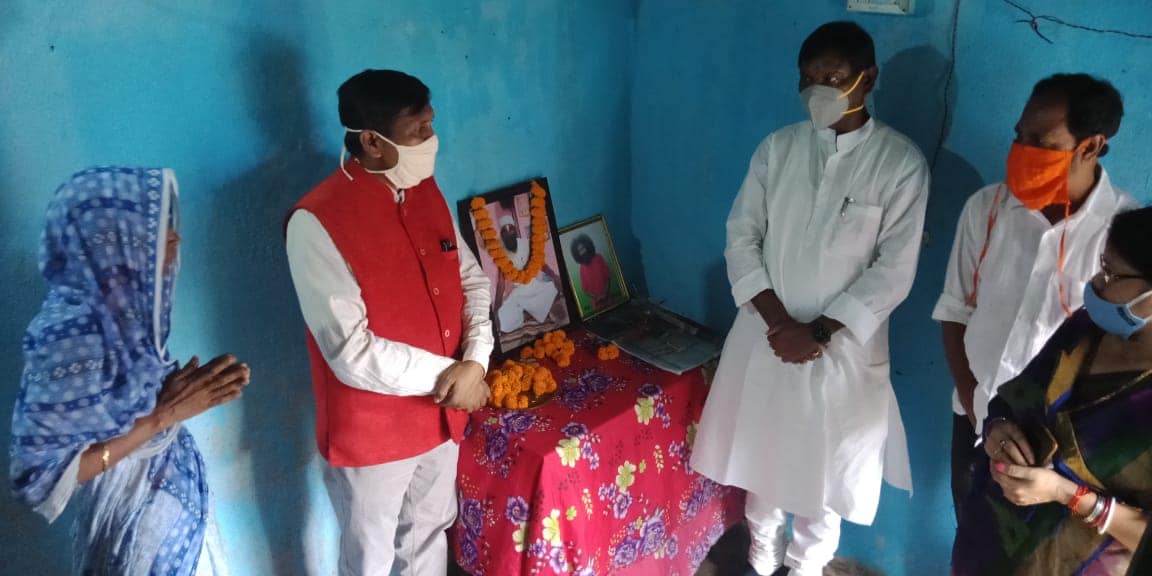 BJP’s active activist Mr. Asit Kumar Bhokta Ji passed away last days. he went to his house in Bundu and paid tribute to him and met his family members. 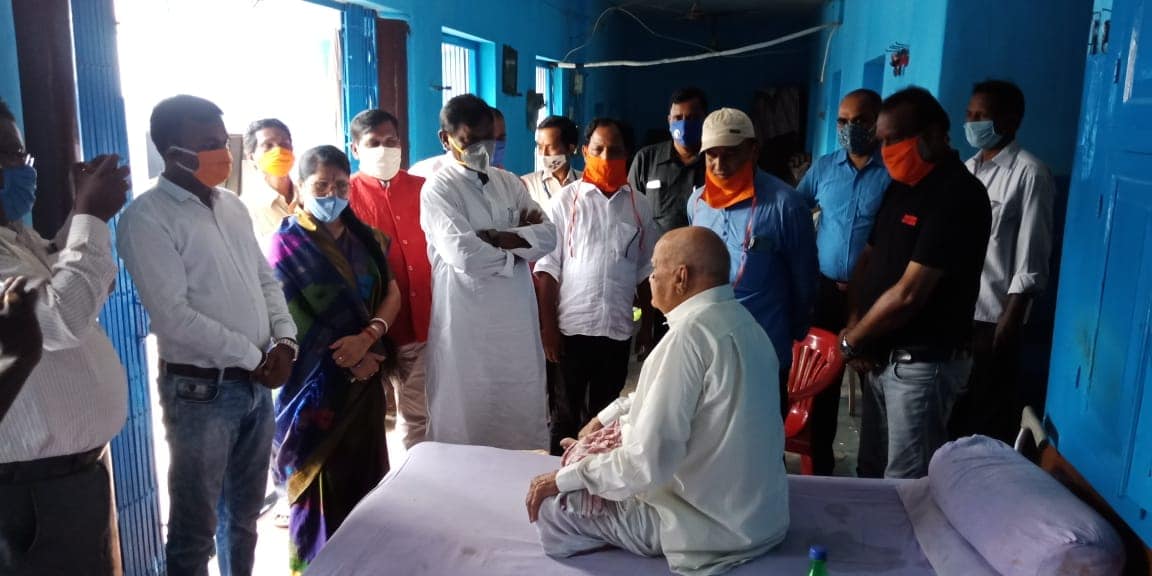 Bundu’s social worker and everyone’s dear Laxmi Prasad Gupta Ji passed away last days. I went to his house and paid tribute to him and met his family members. 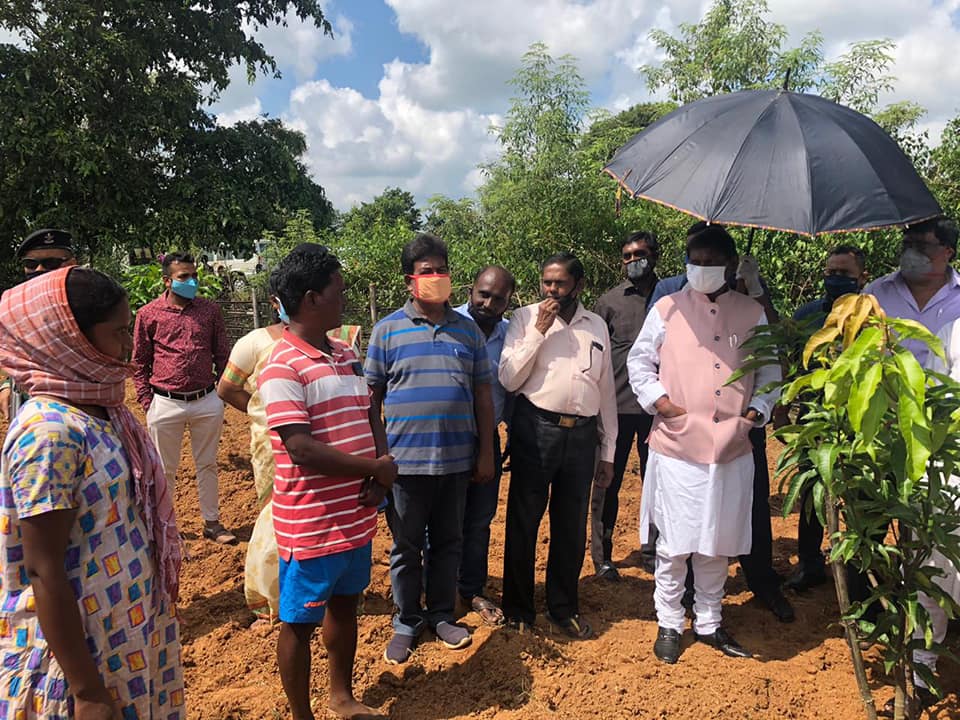 Mango gardening has been started under MNREGA in Navatoli village of my Lok Sabha constituency to make farmers intestinal dependent. India is becoming the dream of Honorable Prime Minister Shri 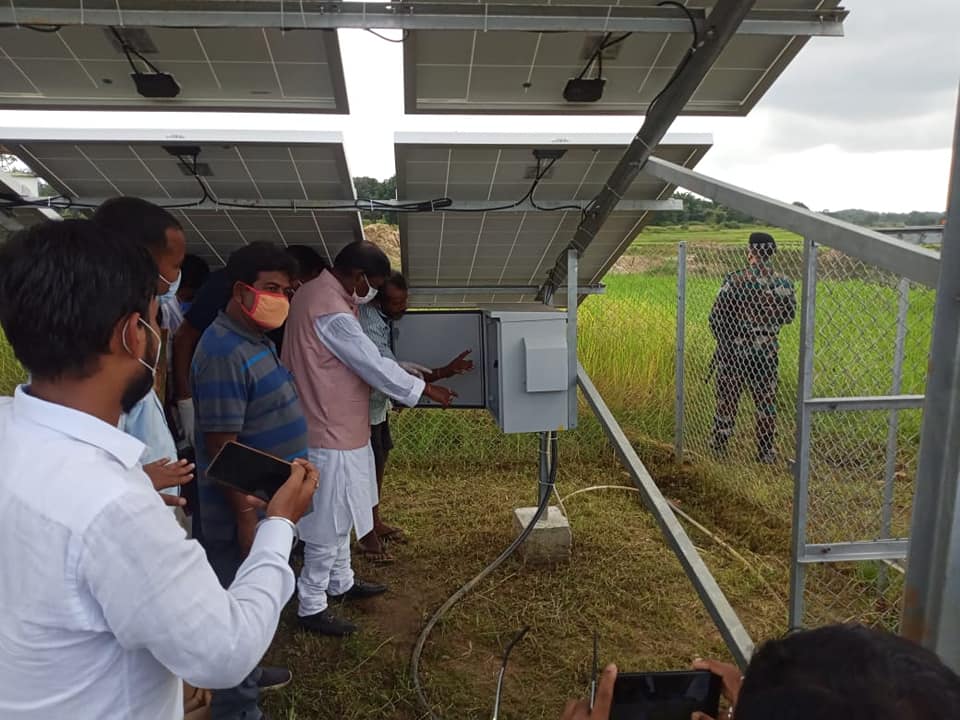 Moving towards advanced and prosperous India! Inaugurated Solar-Based community micro-irrigation project in self-reliant guru village of Torpa division of my Lok Sabha constituency Khunti under Pradhan Mantri Irrigation Yojana. 18.5 acres of the farm will be irrigated from this project.

in the Jamshedpur area

Joined in the JMM

Bihar Legislative Assembly from Kharsawan constituency on a JMM ticket.

Jharkhand Vidhan Sabha for two terms from Kharsawan constituency as a BJP candidate.

from the Jamshedpur constituency parliamentary elections.

Jharkhand Vidhan Sabha from Kharsawan constituency as a BJP candidate.

Lok Sabha from Khunti Constituency by a margin of 1400 votes, Jharkhand, India.