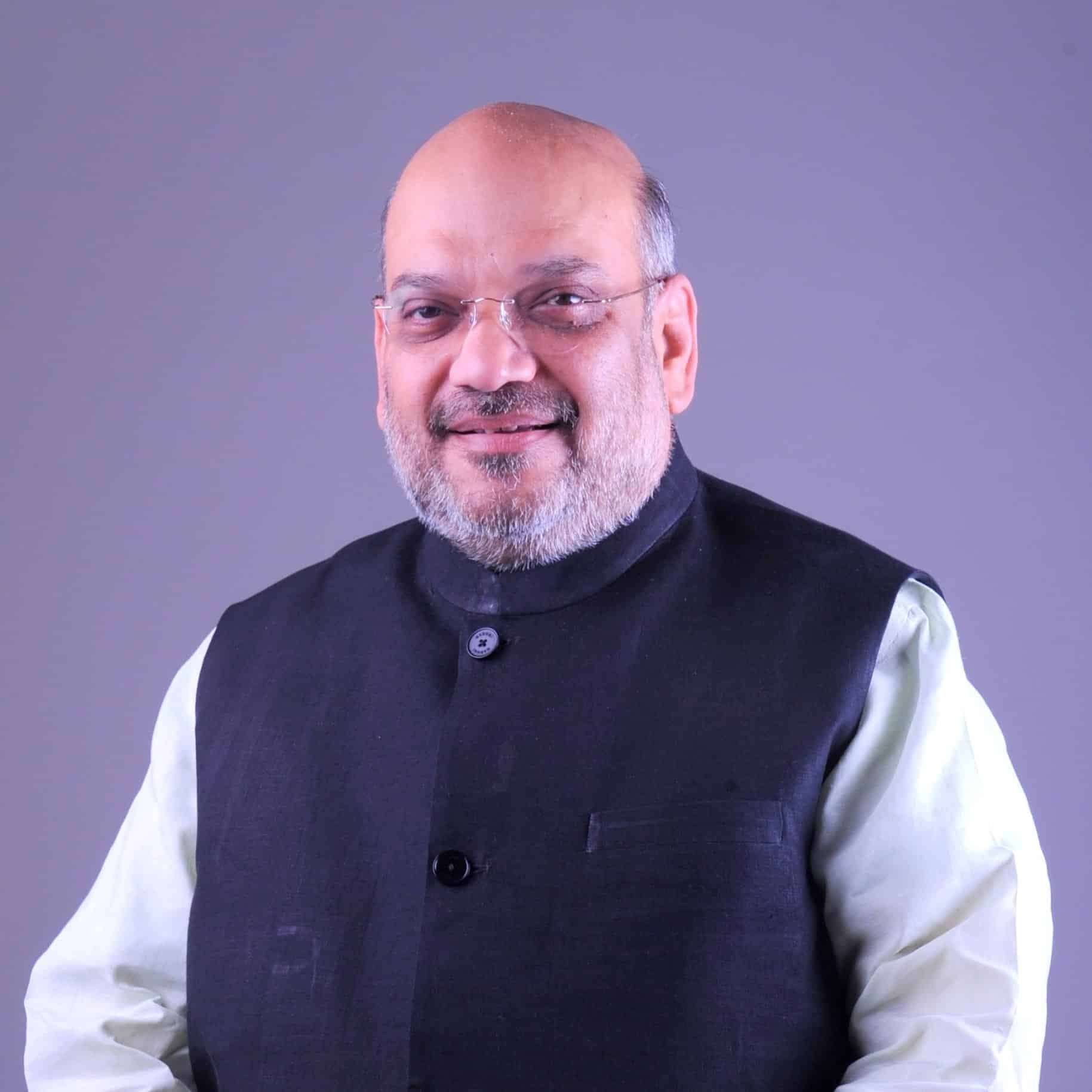 Amit Anil Chandra Shah is popularly known as Amit Shah is the Minister of Home Affairs, India. He was born on 22-October-1964 to Anil Chandra Shah is a Businessman who has a PVC pipe Business. He graduated with a BSc degree in biochemistry and then worked for his father’s business.

He worked in co-operative banks in Ahmedabad. Shah is married to Sonal Shah and the couple has a son named Jay is an Engineer from Nirma University and serving as the Joint Secretary of the Gujarat Chess Association.

Amit Shah was involved with the Rashtriya Swayamsevak Sangh(RSS) since his childhood in 1982 he was made the Joint Secretary of the Gujarat unit of Akhila Bharatiya Vidyarthi Parishad (ABVP) and became the Leader of RSS’s student wing Akhila Bharatiya Vidyarthi Parishad(ABVP) in 1983. He became a Member of the BJP party in 1984. He turned into an activist of BJP’s youth wing Bharathiya Janata Yuva Morcha(BJYM) in 1987.

He gradually rose in the BJYM hierarchy, in which he held various posts including Ward Secretary, Taluka Secretary, State Secretary, Vice-President, and General Secretary. He became known for his management skills when he was the election campaign manager for Lal Krishna Advani in Gandhinagar during the 1991 Lok Sabha elections.

Amit Shah was made the Secretary of the BJP Ahmedabad City in 1989. Due to the political activism and efficiency of Shri Amit Shah, he was appointed the National Treasurer of the Bharatiya Janata Yuva Morcha (BJYM) in 1997.

Shah was first elected in Gujarat as the MLA from the Sarkhej constituency in 1997 in a by-election and continued to hold it in 1998, 2002, and 2007 elections from the same constituency. In 2000, At an age of only 36 years, Shri Amit Bhai became the young Chairman of the Ahmedabad District Cooperative Bank. In a short span of one year, Amit Bhai not only recovered the loss of 20.28 crore rupees but made the bank attain a profit of 6.60 crore rupees and distributed a dividend of 10 percent, as well.

In 2001, Shri Amit Shah was appointed as the National Coordinator of the Cooperative Wing of Bharatiya Janta Party and Amit Bhai praised so much during his tenure that some people even gave him the title of the Grandfather of the Cooperative Movement. Shri Amit Shah was sworn in as a Minister for the first time in 2002-2010 and as minister Amit Bhai was handed over the responsibility of some important departments like Home, Traffic, Prohibition, Parliamentary Affairs, Law, and Excise.

His favorite person is Shri Narendra Modi and he first met him in 1982 through the Ahmedabad RSS circles. At that time, Modi was an RSS Pracharak (propagator), working in in-charge of youth activities in the city. Modi and Shah used the same strategy to reduce Congress’s influence over the state’s powerful co-operatives, which played an important role in the state’s economy. Shah served as the President of the Gujarat State Chess Association. In 2009, he became the Vice-President of the profitable Gujarat Cricket Association(GCA).

Modi, who had become a general secretary in the party’s state unit by the early 1990s, used his influence to get bigger roles for Shah. He convinced Patel to appoint Shah as the Chairman of the Gujarat State Financial Corporation, a public sector financial institution that finances small and medium-scale enterprises. After Shankersinh Vaghela and some other leaders complained about Modi’s growing popularity in the Gujarat government, the party leadership moved Modi out of Gujarat to the BJP headquarters in Delhi. During this time (1995–2001), Shah served as Modi’s confidante in Gujarat.

In 2012, He elected as MLA from Naranpura Constituency. Shah was the BJP’s in-charge of India’s largest and politically most crucial state, Uttar Pradesh, during the 2014 Lok Sabha elections. In 2013, Recognizing the efficacy of Amit Bhai, the BJP’s national leadership made him the National General Secretary before the 2014 Lok Sabha elections. The BJP recognized the commitment, hard work, and organizational capabilities of Amit Bhai and made him the President of the Party in 2014.

In less than one year of taking over as BJP’s National President, Amit Bhai traveled to each and every state in the country to push the party’s ideology and enlarge party membership. The results of this drive were startling. He made BJP the world’s largest political party with over 10 crore members. His resolve to strengthen BJP did not end at making it the world’s largest party as he initiated a number of programs to spread party ideology and its mass connect. One such program was “Mahasampark Abhiyan” aimed at engaging newly acquired members in the party’s programs. The combination of PM Modi’s leadership and Amit Bhai’s well-crafted election strategies resulted in BJP winning four of the five assembly elections held during the first year of his tenure as party president.

He was re-elected as the party’s president unanimously on 24-January-2016. In 2016, Amit Shah was made the Trustee of the Somnath Temple Trust. Shah also spearheaded campaigning in the 2017 assembly elections and led the BJP to victory in the 2019 Indian general election he became the most successful BJP president. A key achievement of Amit Bhai’s political career was breaking the stranglehold of the Congress over Gujarat’s cooperative movement, which was a source of electoral strength and influence.

He elected as a Member of the upper house of Parliament, Rajya Sabha, from Gujarat in 2017 also served to the lower house of Parliament, Lok Sabha, in the 2019 Indian general elections from Gandhinagar. Shah became a Cabinet Minister and took oath as Minister of Home Affairs on 1-June-2019. He Re-elected as MLA from the Gandhinagar in 2019. He swore as Union Minister in the Modi government on 30-May-2019.

Despite his hectic schedule and numerous public engagements, Amit Bhai loves to unwind by listening to classical music, playing chess, and watching a game of cricket. He has a keen interest in “stage performances” also as he himself performed on several occasions during his student life. 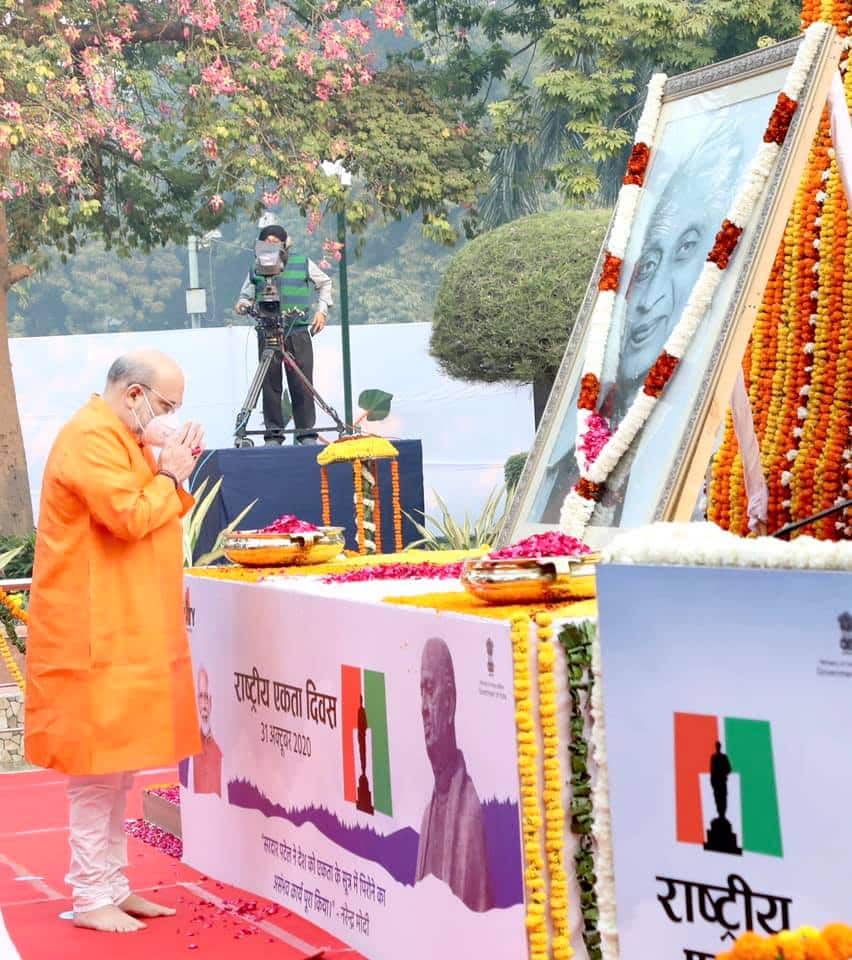 Amit Shah Paid floral tributes to the National Pride and inspirational Sardar Vallabhbhai Patel on his birth anniversary at Patel Chowk in Delhi. 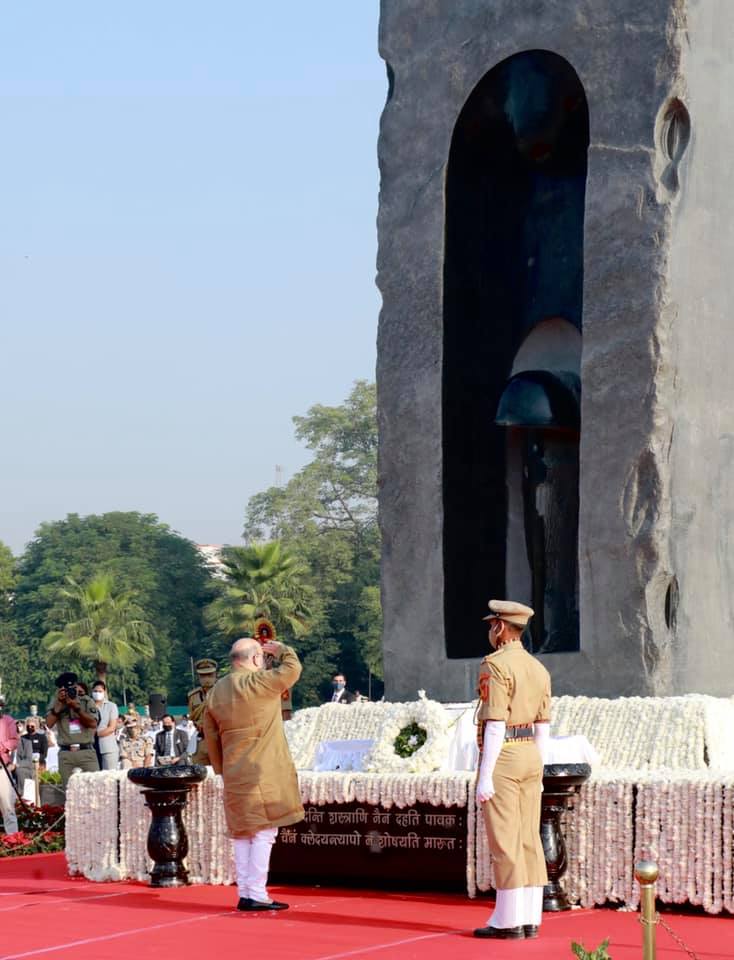 On Police Commemoration Day, Amit Shah bow to the great martyrs who fought till their last breath to keep our nation safe. ‪He says that Their commitment towards the motherland inspires each and every Indian. 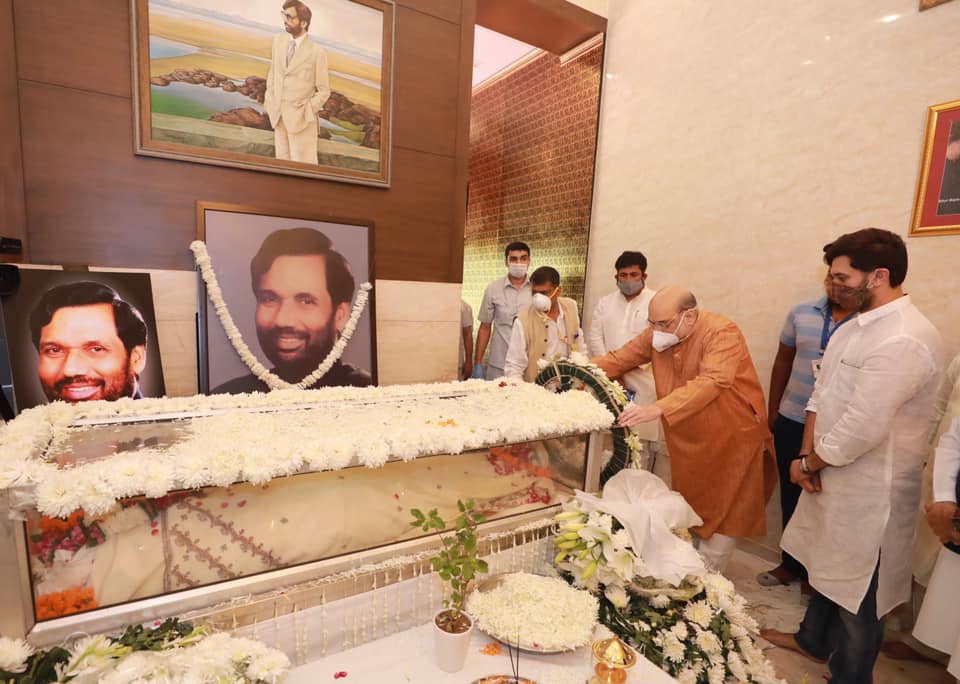 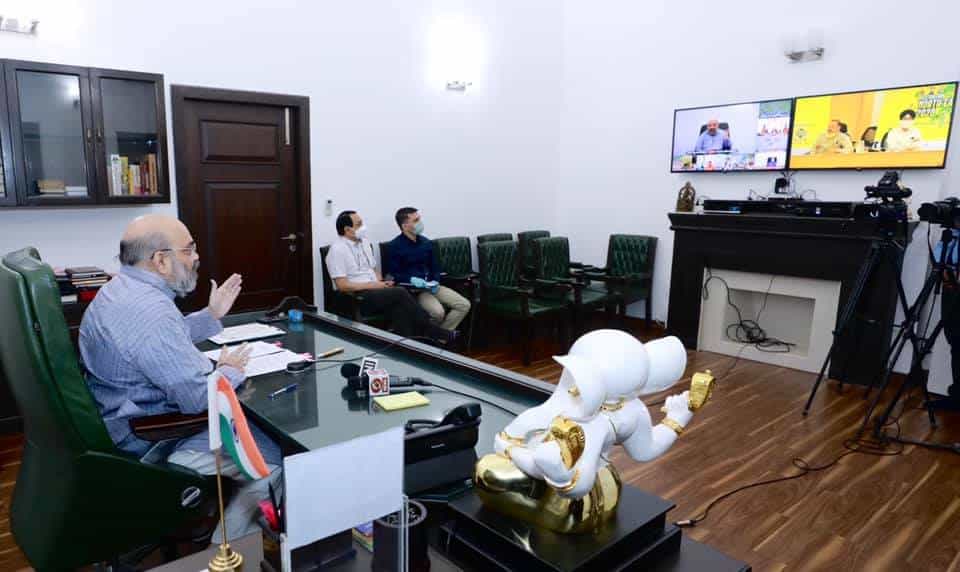 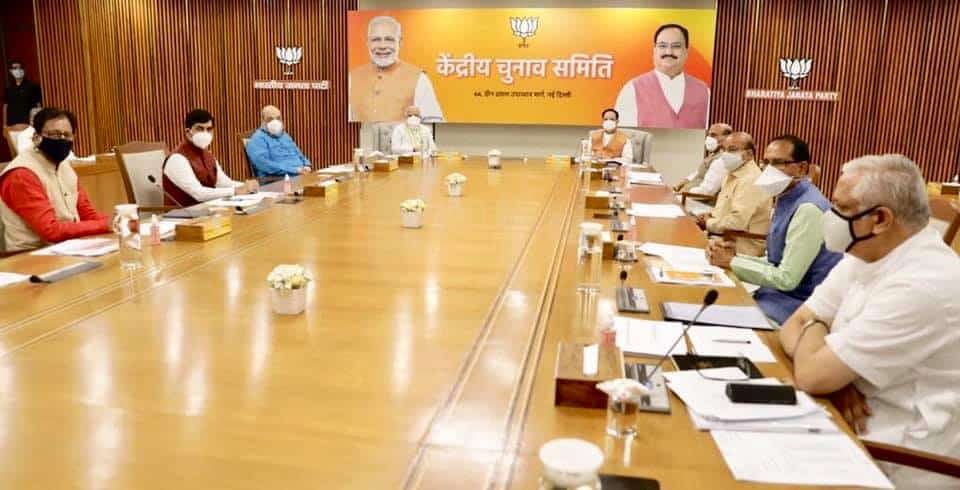 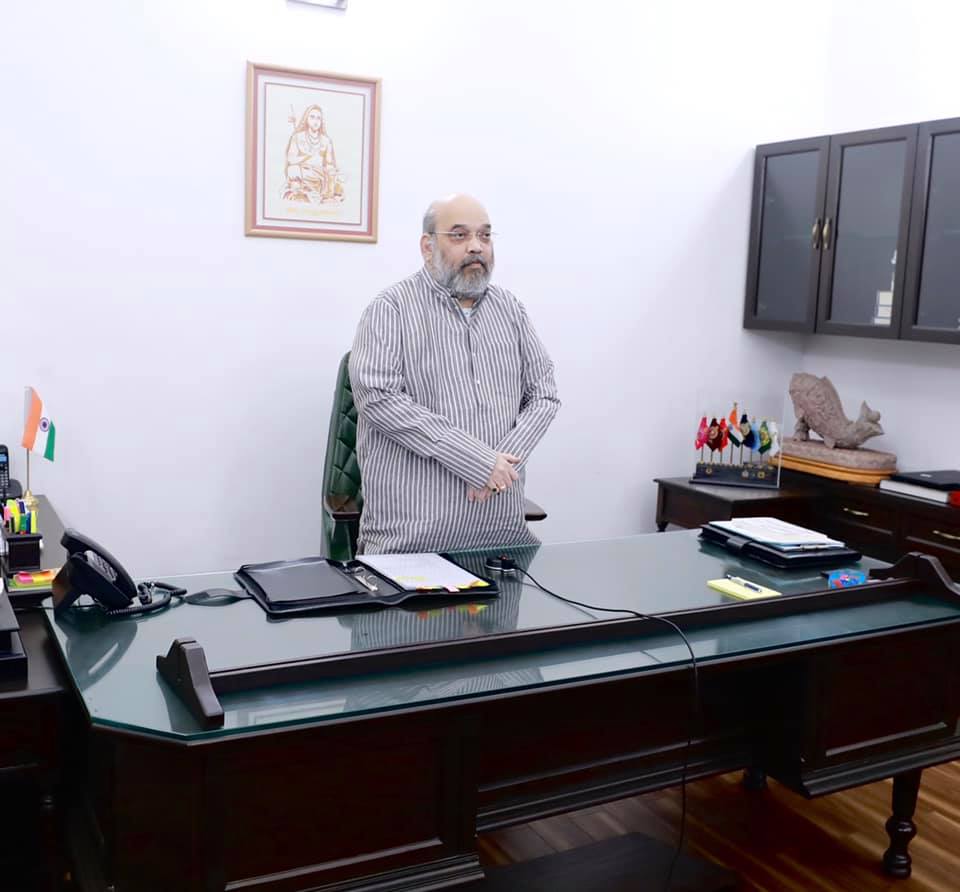 Amit Shah Joined Union Cabinet video via conferencing to pay tributes & offer condolences on the sad demise of a colleague and a distinguished public servant, Shri Suresh Angadi Ji. May God give strength to the Suresh Angadi family to withstand this loss. 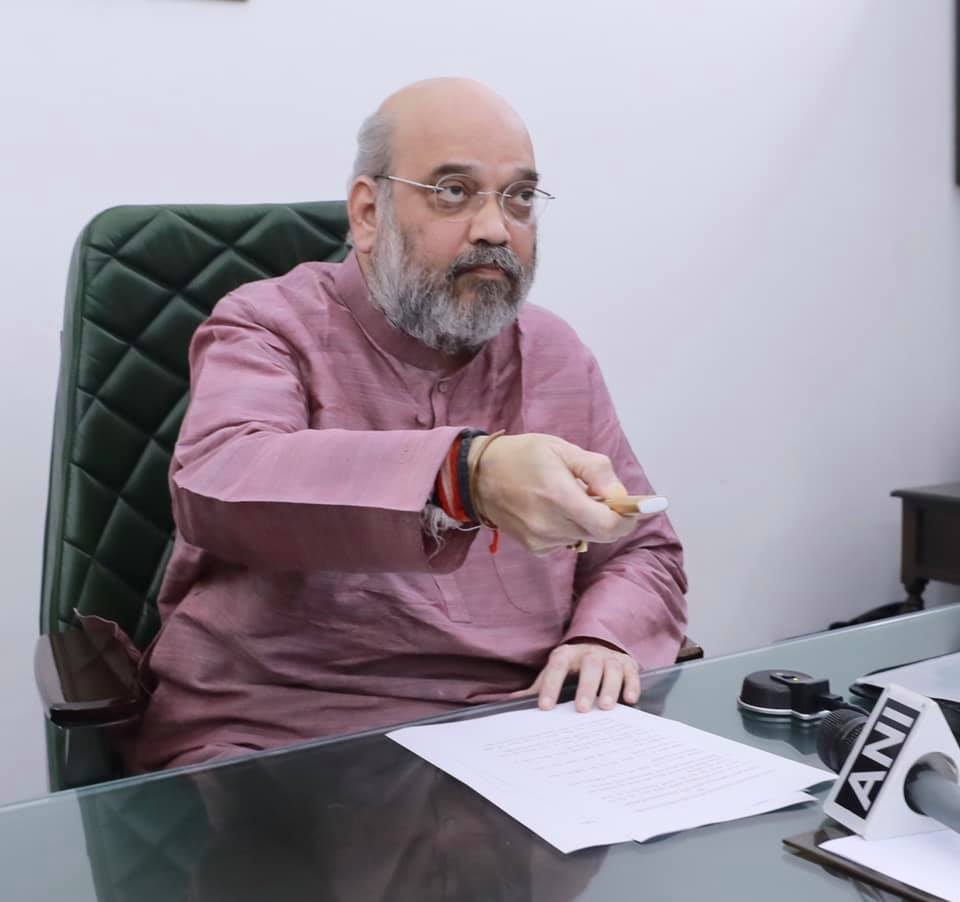 Ami shah Inaugurated and layed the foundation stone of various development works of । 222.17 cr in Ahmedabad district and city. 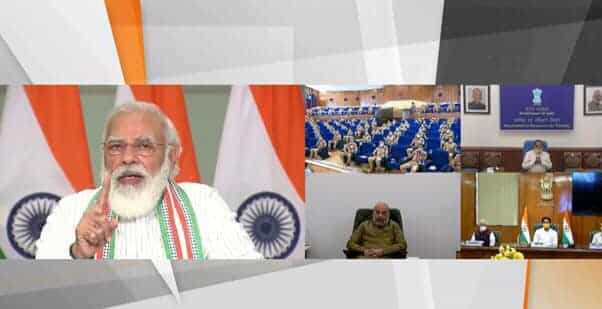 Home Minister Amit shah gave his best wishes to all these young IPS officers on their Dikshant Parade.‬
‪May they serve the nation with utmost dedication while ensuring its security and integrity. I am confident that their commitment to service will inspire our youngsters to join the Indian Police Service

with a BSc degree in biochemistry

Joined in the BJP Party

of the BJP Ahmedabad City

of the Gujarat State Financial Corporation

of the Bharatiya Janata Yuva Morcha

of the Ahmedabad District Cooperative Bank

of the Ahmedabad District Cooperative Bank

and Traffic and Prohibition and Parliamentary Affairs and Law and Excise.

of the Gujarat Cricket Association

Trustee of the Somnath Temple Trust

to Rajya Sabha, from Gujarat

to Lok Sabha,  from Gujarat

Thank you @himantabiswa for your kind wishes. https://t.co/VowXcNb1mJ