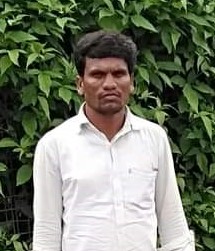 Potta Ravindhar is an Indian politician from the South Indian state of Telangana. He is Serving as the current Constituency President of Sangareddy from the BSP.

He was born in Malkapur, Telangana on 08-October-1984 to Potta Narayana.

He received his Secondary School Certificate at ZP High School resided in Malkapur and completed Intermediate at Sahithi Junior College from Sangareddy.

Later, He obtained a Bachelors’s degree from Nagarjuna University located in Sangareddy and completed his education with the Post Graduation (M.sc) from Narayana Pg. College.

Ravindhar was an active student during his School and College days and joined the RSS (Rashtriya Swayamsevak Sangh) the Students Wing of BJP by providing services and bring a solution to the problems faced by students in College and also for the welfare of people irrespective of their Caste, Race, Gender, and Religion to bring justice to the nation.

Later, debuted into active politics at a very young age with great interest and with the idea of serving the people through the Bharatiya Janata Party (often called as BJP) which is founded by the Narendra Modi.

Since the date of joining the Party, He has been working as an Active Member who worked all day and involves in every organized Party meeting and works for the growth and development of the Party and Village.

During the local body elections, Ravindhar was Independently Contested for the position of Ward Member and elected as the 8th Ward Member of Malkapur Village.

For his constant attention and pure dedication towards the service to the village, made him re-elected for the same position for the 2nd term.

During the general elections held in 2014, Ravindhar was nominated for the MPTC (Mandal Parishad Territorial Constituency) and he claimed the victory to serve with gratitude and constantly worked hard for the People and Mandal development.

In 2014, Ravindhar contrasted from the BJP and joined the Bahujan Samaj Party (BSP) which is formed mainly to represent Bahujans ( Scheduled Castes, Scheduled Tribes, and Other Backward Castes)

and intending to serve these as the majority of the people in the country are mostly Bahujans.

In the same year, He was appointed as the Mandal President of Kondapur and worked in the position by doing his part for the betterment of the society by carrying out his duties properly and following the rules and regulations of the party.

Constantly striving for the welfare of the people and expressing his feelings of service, made him promoted to the Constituency President of Sangareddy in 2015 to promote the right perspective towards the need for holistic and sustainable development in people by doing his part to alleviate the hardships faced by the Students and people.

Ravindhar is fighting for Dalit rights and also struggling for the Dalit-Bahujans to come into power. An awareness program was organized in the village on the importance of voting and the right to vote

Dalit-Bahujans are fighting for economic equality, recognizing the spirit of the vote, and finally striving for statehood. They plan to work together in Dalit-Bahujan ideological political parties in the near future. Conducted many party meetings and development activities for community development.

Ravindhar fights every problem raised by Dalit-Bahujan and solves them. And special programs for Dalit Bahujan women. A petition has been submitted to the Collector to repeal the new agricultural laws for the welfare of farmers.

Ravindhar along with the party members made a struggle against the federal rule in the country and He put in Better participation in the party program as directed by the national BSP presidents. and work will be done for the betterment of SC, ST, BC.

There was a protest over the central government’s regulatory policies and schemes. He is constantly being fought over the People’s problems like Ration card, Aadhar card and petitions are being handed over to the concerned authorities.

During Elections, he actively participates in the Door-to-Door election campaign and worked hard to win the party in his locality. Many party development programs were carried out in the village for the growth of the party.

As a student, He fought for every issue related to students and sorted them out within a minute. Constantly working hard for the student’s career. His hard work and commitment towards the work made him struggle hard to make his dreams and goals come true, and finally, he is rose to the top.

He served as a Social Activist. He served under the BSP party by helping the below-poverty students unconditionally irrespective of their caste. He fights over every issue raised in the town and persistently worked to solve the issues. As a party activist, he will be available to the people in their difficult times.

He distributed fruits and medicines to the unhealthy students and needy people in the village. He provided his financial support to the poor people in the village and Distributed Books, pads, and Stationery things to High School Students, and motivates them to score high marks also donated a certain amount to the merit students for their higher education.

He conducted Village development activities in the village like laying of CC Roads, Digging of Borewells, Putting up Street Lights, Clearance of Drainage systems, and Solving water Problems.

He stood up for the poor and ensured the development of welfare. He always raises his hands to serve the poor. Conducted Annadhanam Program, which is served and satisfied many hungry people.

Money was donated to the families of the poor during the wedding to support their families financially. Ramesh assisted the death-affected family financially for their survival.

If anyone in the village encounters any problem, he will be at the forefront of the problem. He conducted Cultural and Traditional programs and noticed every student’s talent and he gave the best advice for their future career.

Every Year he celebrates Freedom Fighters Birth anniversaries and distributes food packets to the villagers. He will assist those who come to him for help and provide the essential things that they require, helped many orphan homes.

Ravindhar came forward to help the needy who have been affected by lockdown and distributed vegetables and fruits to the villagers, needy ones, and Municipality workers by following the precautions.

Food item packets for drivers and migrant laborers were distributed whose livelihood has been affected during this lockdown period. Ravindhar came forward with humanity to help those in dire straits during the corona and provide financial assistance to the people who are affected by the lockdown.

He apportioned Masks, Sanitizers, and food to the poor and also contributed to them financially. To spread awareness about social distancing and following precautionary measures to prevent the Epidemic Corona an awareness program has been conducted.

As part of the drive to eradicate the corona epidemic, Sodium hypochlorite solution was sprayed all over the village for the safety of the village. Even during the epidemic of the corona, essential goods were distributed to needy people every day.

The second wave of Corona:

Ravindhar distributed fruits and vegetables to the Villagers who are suffering due to the pandemic. He created awareness by explaining about the coronavirus spread which leads to a great loss to the earth.

He provided food packets and water bottles to the roadside and the poor people. Ravindhar also provided free masks and sanitizers to people with corona deficiency symptoms at the hospital.

He worked all days(Day and Night) during the Covid period and looked after the people. During the second wave of the corona, the people of the Sangareddy constituency, who are corona-infected and isolated, support hundreds of distressed families and provide them meals a day every day.

With the help of the BSP, Ravindhar handed over the Remdesivir injection to those who needed it to escape the corona. He is constantly available mainly to the poorest people in the zone.

Ravindhar regularly read the books of Dr. Br Ambedkar and Kanshiram which it was written about the upliftment and political mobilization of the Bahujans. He spends special time reading Kanshiram’s books and acquired knowledge about the constitution and the system of government. Although his health deteriorated for 2 years, he read books with concentration and recovered quickly by reading these books. 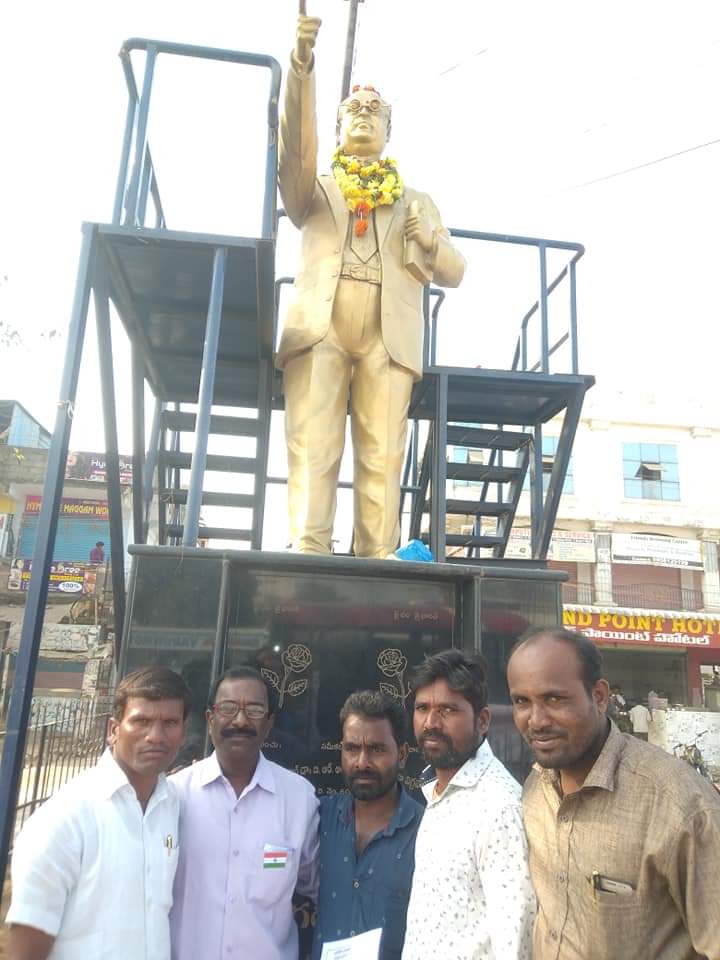 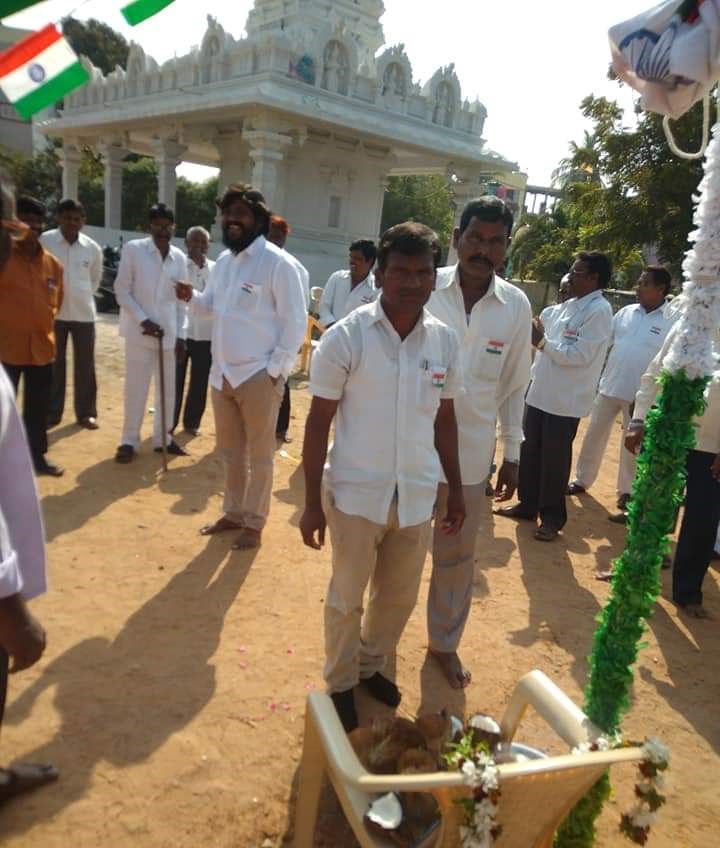 “I am of the opinion that my life belongs to serve the Dalit-Bahujans and as long as I live, it is my privilege to do

for it whatever I can. I want to be thoroughly used up when I die, for the harder I work the more I live.”